History (scroll down for notes on visiting the crash site)

The Superfortress took off on the morning of 3 November 1948, at around 10.15 from Scampton, Lincolnshire for Burtonwood USAF base, near Warrington, England. It was a routine flight with 2 other aircraft, the RB29 carrying USAF wages among other things. The crew were due to return to the States a few days later.

When ‘Over Exposed!’ failed to arrive at Burtonwood, an air search was initiated and that afternoon the burning wreck was spotted high on the moors near Higher Shelf Stones. By chance members of the Harpur Hill RAF Mountain Rescue Unit were just finishing an exercise two and a half miles away, so they quickly made their way to the scene of the crash but there was clearly nothing that could have been done for any of the crew.

All 13 men on board were killed instantly when the aircraft flew into the moor. It is not known why Captain Tanner did not fly at a height sufficient to clear the high ground.

For more, please see the account of a member of the recovery party which arrived on site the day after (photo above, top left).

‘Over Exposed!’ was a photo reconnaissance aircraft – hence the name – and had photographed some of the nuclear bomb tests at Bikini Atoll in the Pacific Ocean and had taken part in the Berlin airlift.

Approximate post code for the lay-by is S33 0AB

As of October 2020, there is a bus route over the Snake Pass with bus stops at the top of the pass, next to the lay-by. The route is between Manchester Chorlton St and Sheffield Interchange, return fare £10. See here for timetable; Snake X57 bus times

Warnings and disclaimer
If you are planning on visiting the site, the usual warnings about having the right kit and plenty of Kendal mint cake apply; map and compass and the ability to use them, waterproofs, good boots and so on. Low cloud makes for an atmospheric visit but it also increases the chances of getting lost. On Bleaklow that’s at best an inconvenient and frustrating experience and at worst a call out for Mountain Rescue. At the risk of sounding paternalistic, I’d advise those dressed for the pub and without map and compass against it. It is nearly always wet and boggy. One of the biggest risks is in walking along the paved sections when they are iced up. The details below do not constitute professional guidance, so of course you use them at your own risk. You probably won’t get a connection up there, so please copy these notes if you intend to use them.

Walk north along the Pennine Way (PW) from the layby along the made path (the new path and paving further on is to minimise the erosion of the Devil’s Dike).

The PW crosses the old Roman road at Doctor’s Gate and soon the first of the paved sections starts.

At the end of this short paved section there are some steps down to cross a little stream at SK 09210 93611. After this point the made path becomes a good stony path and it is about 10 minutes’ walk to the point where another path leaves the PW for the crash site.

At SK 09848 94244 the paving stones reappear, climbing slightly just ahead of you. Here, i.e. just before the paving stones start again, an intermittent path leaves the PW on the left and goes directly to the crash site. A slab of stone flat on the ground on your left marks the spot where you leave the PW. 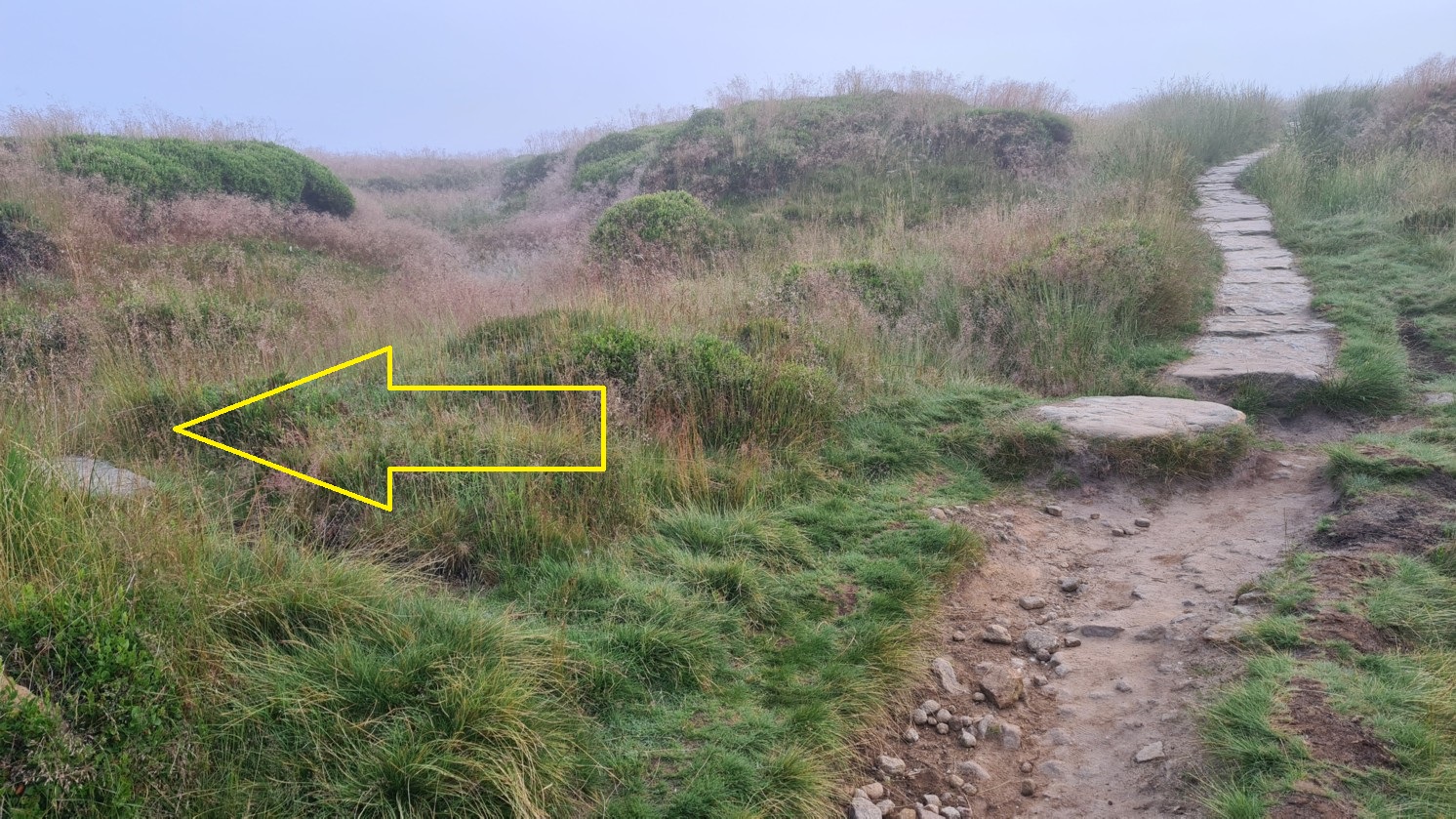 It is usually very wet underfoot. This path follows a dike across Alport Low, the dike being marked on OS 1:50000 maps but not on 1:25000 maps. The dike is not that obvious on the ground but can clearly be seen from the southern end of the crash site for the return journey.

The path crosses Crooked Clough at SK 09443 94495 and continues gaining height before turning north to get to the crash site.

If you want to visit via the trig point at Higher Shelf Stones, you will need to keep heading north west across rough moor (no path) until you come to the edge of the moor and the drop to White Clough, then turn right. It is easy walking up to the trig point.

The path from the PW is fairly clear in good visibility. In low cloud, you might be better off taking the slightly longer route via Hern Clough. In this case, or if you miss the path turning, stick to the intermittently paved sections of the PW, walk past a PW marker stone and you will arrive at a cairn where the path appears to fork. Keep left (there is a marker stone in the cairn pointing the way and there is also a new wooden post with a white arrow on a black background; see note at the end of these directions). It is about half an hour from the lay-by to this point. 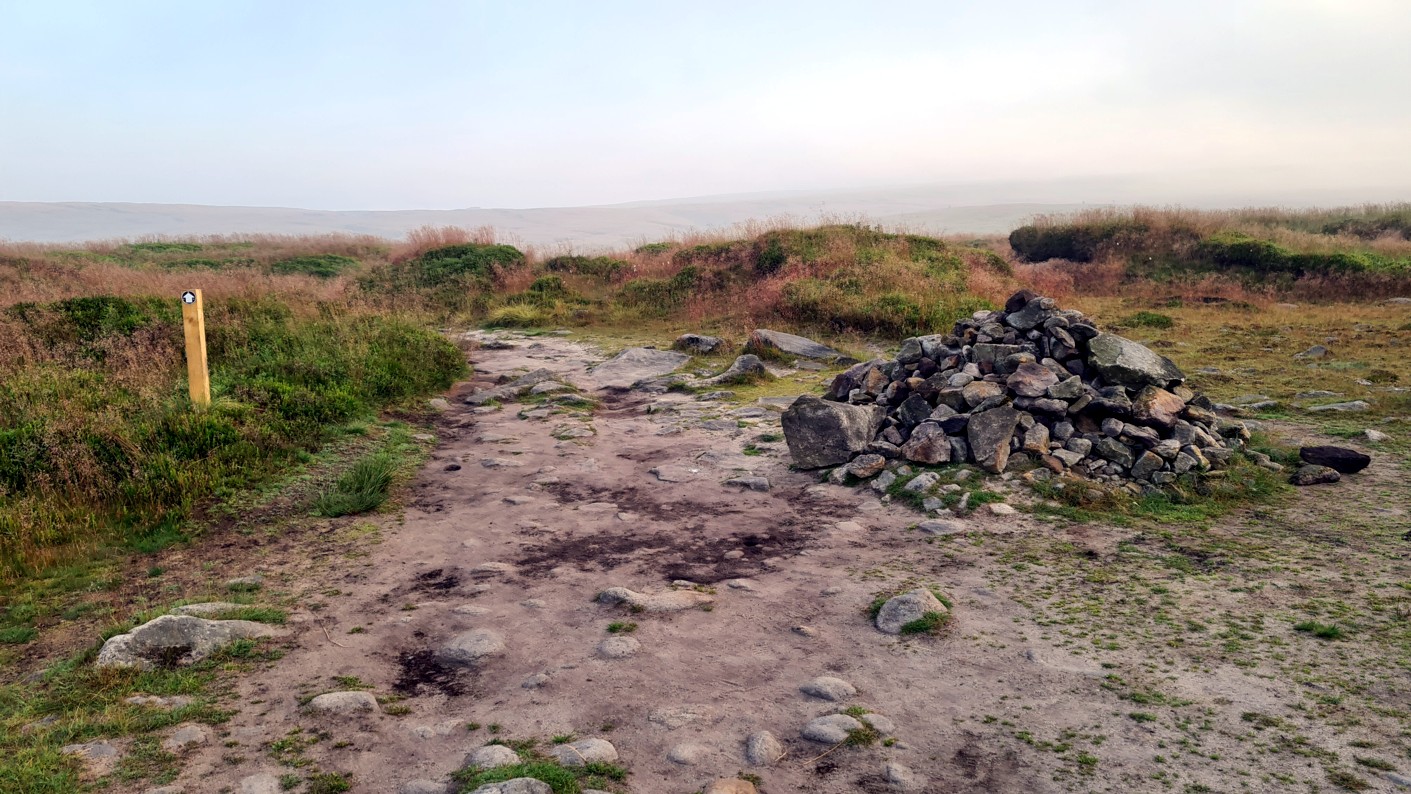 Photo above showing the route going to the left of the cairn near Hern Clough. Note the new marker post (see note at the end of these directions).

The PW drops slightly down to the stream at Hern Clough. Keep the stream on your right following the PW as it turns west (left). In a couple of minutes you will arrive at the point where you leave the PW at SK 09708 94773. Here the PW heads north, passing a marker stone.

Instead, cross the stream (i.e. walk west) and follow another path which immediately turns right (north) and follows another stream, running parallel to the PW for a few minutes in a north westerly direction. 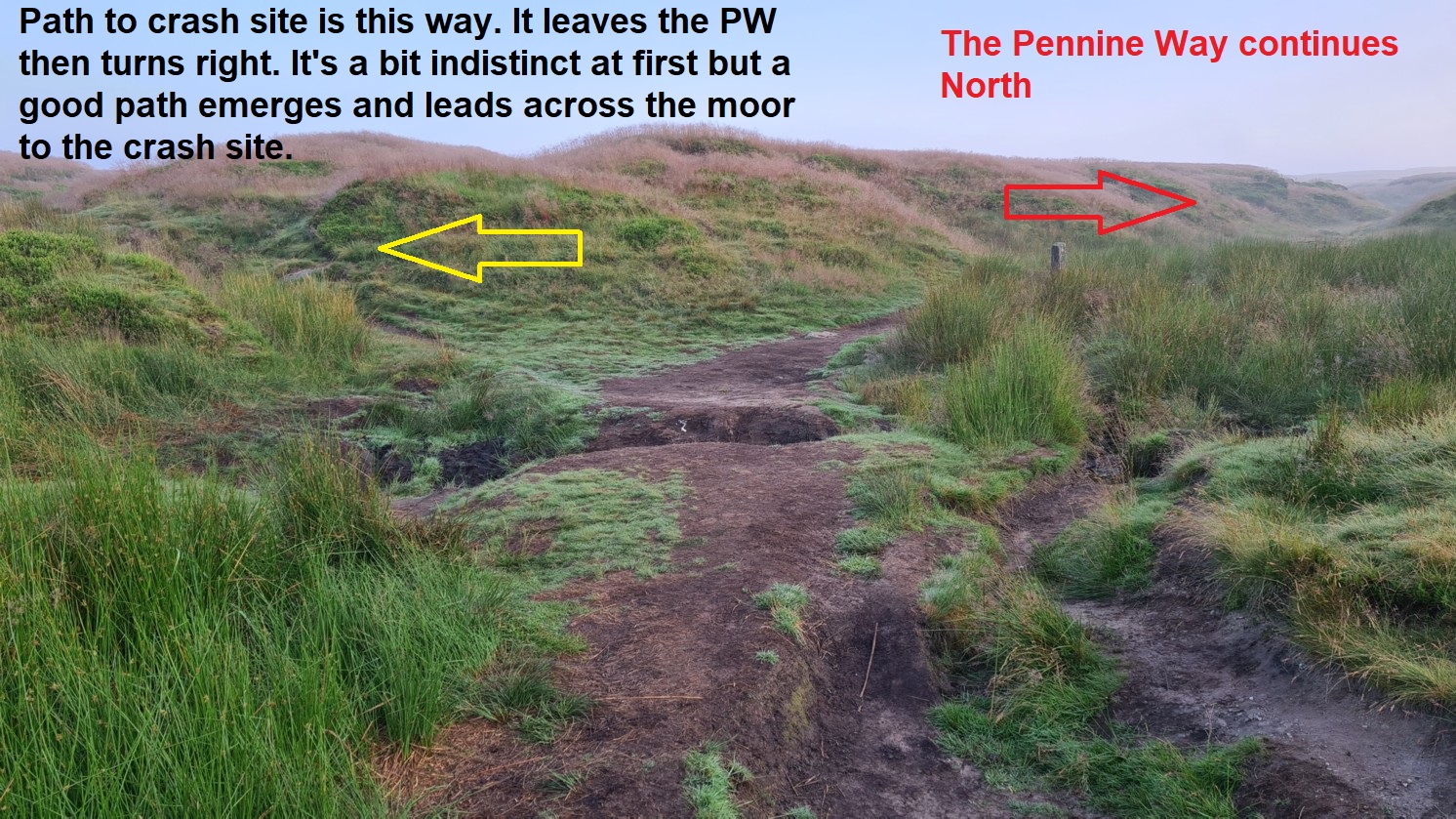 At SK 09468 94926 this path leaves the stream and heads west and out across the moor, going directly to the southern end of the crash site.

The crash site memorial stone at the north western edge of the site is at SK 09040 94896 which is about 200m to the north east of the trig point on Higher Shelf Stones.

The return journey is probably a bit easier – head south east and turn right when you reach the Pennine Way. Going too far to the south will put you in Crooked Clough which will of course mean a climb back out again.

From the southern end of the crash site you can pick up the intermittent path which leads back to the Pennine Way. In clear weather you will see the dike crossing the moor; this is the route back to the PW. 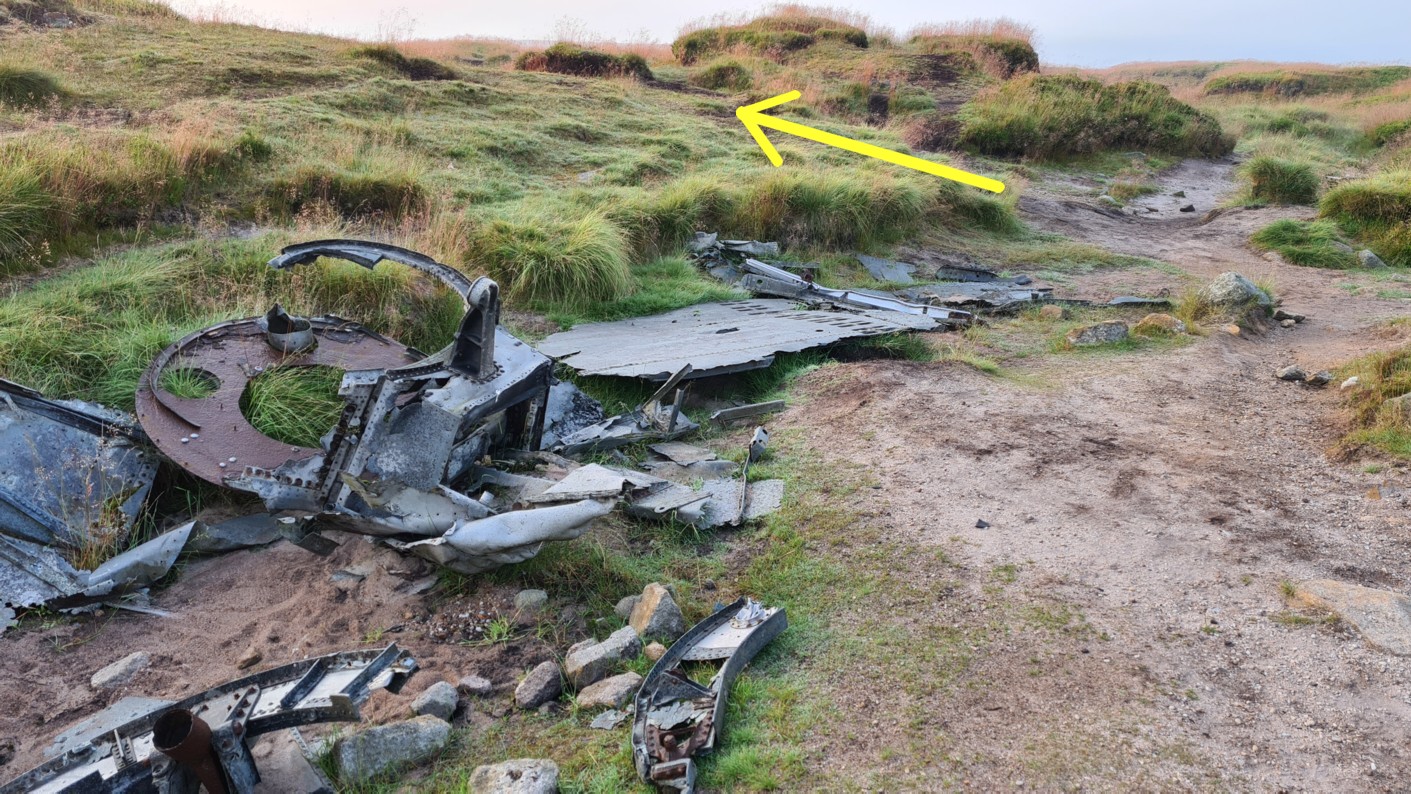 Photo above: if you want to return to the Pennine Way via Hern Clough, the path leaves the crash site near the remains of the tail turret section.

Note
As well as the new bus route and bus stops at the top of the Snake, new signs and posts have appeared along the path from the lay-by. The signs refer to a “waymarked route” to the crash site (presumably the site of ‘Over-Exposed’ though there are at least 8 air crash sites on Bleaklow with some surface remains). The posts have a white arrow on a black background. On my visit today (21 July 2021) I did not see any such posts after the cairn before Hern Clough (see image above, you can see a post on the left) but I wasn’t particularly looking for them.

However, there are a number of different route markers along this path; some all yellow in design, some with orange arrows on a green background, others yellow on a white background etc. Added to that, some of the Pennine Way marker stones have been moved around or toppled over… It could be confusing. I wouldn’t rely on following marker posts, would advise using a map and compass and GPS device if you have one, but I will make the effort to follow the waymarked route next time I visit and will update this page. 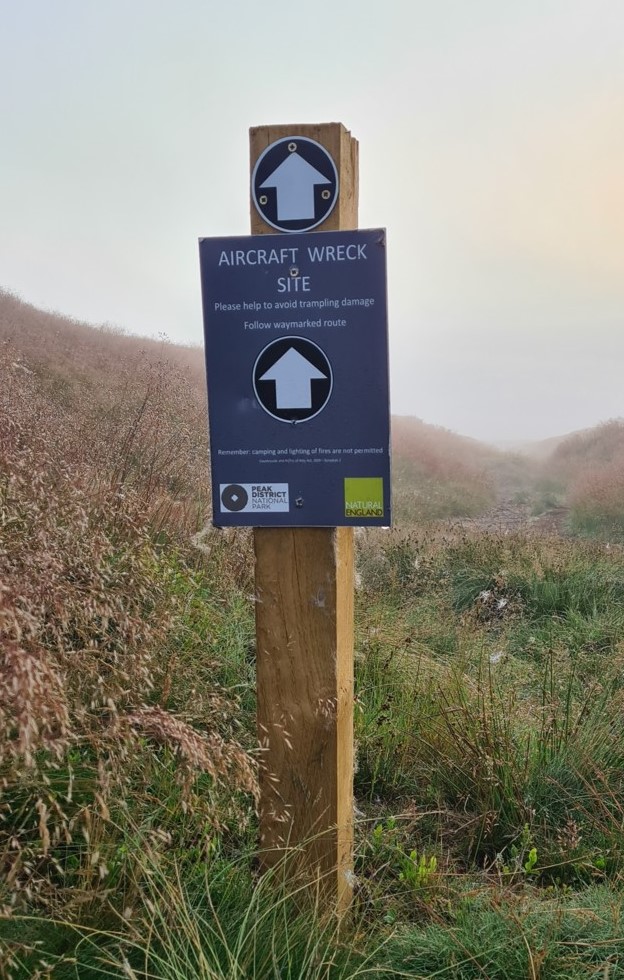