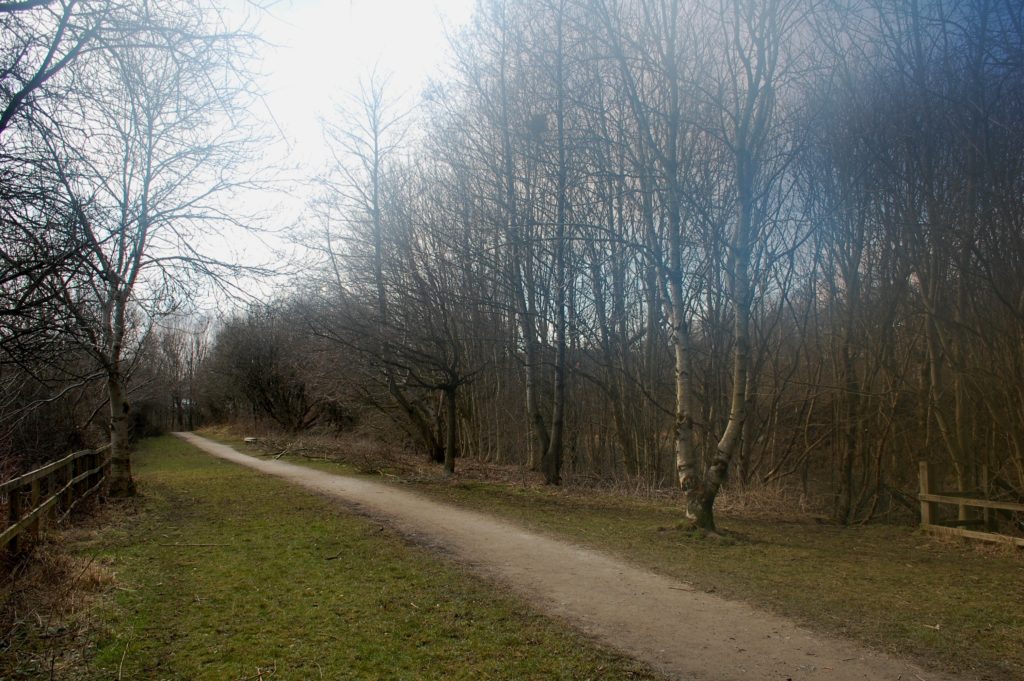 A visit to the site of Glen Mill Prisoner of War camp in Lees, Oldham, Winter 2013.

UPDATE 18 MAY 2021
Please see the comment below (17.05.21) by Ben Golding. Ben is a researcher for a production company making a show for Channel 4 called ‘The Great British Dig,’ the next series of which will feature a dig at the site of Glen Mill PoW camp. If you have any recollections of Glen Mill and the PoWs interned there in the 1940s, Ben would love to hear from you. His email address is ben@strawberryblond.co.uk

Please see Britain at War for details of a couple of PoW and internment camps at Bury and Air Raids & Bomb Sites for a few photos and stories about air raids on Oldham.

Photo above; is looking towards the site of Glen Mill from the line of the now dismantled railway.

Below; Glen Mill from the cemetery. 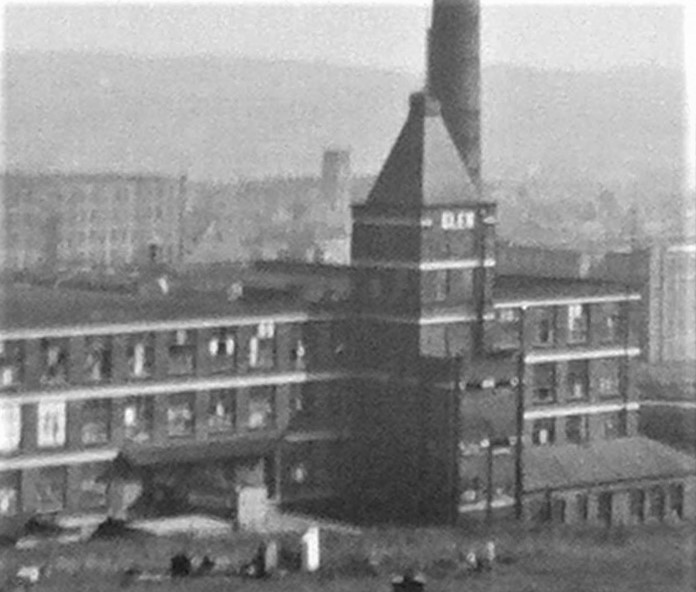 One of the main prisoner of war camps in the north west of England, the now demolished Glen Mill was situated between Wellyhole Street / Constantine Street and the River Medlock at Lees in Oldham (Grid Ref SD 949 049).

These photos were taken January 2013 during a visit to look for traces of the camp. There is not much left, though some local people were able to confirm the spot.

It is possible to find bits of concrete and iron which date from the war and piles of red brick from the now demolished mill.

Below; This first photo shows a new wall on top of what was a pill box overlooking the main entrance. There is a similar mound just next to it. 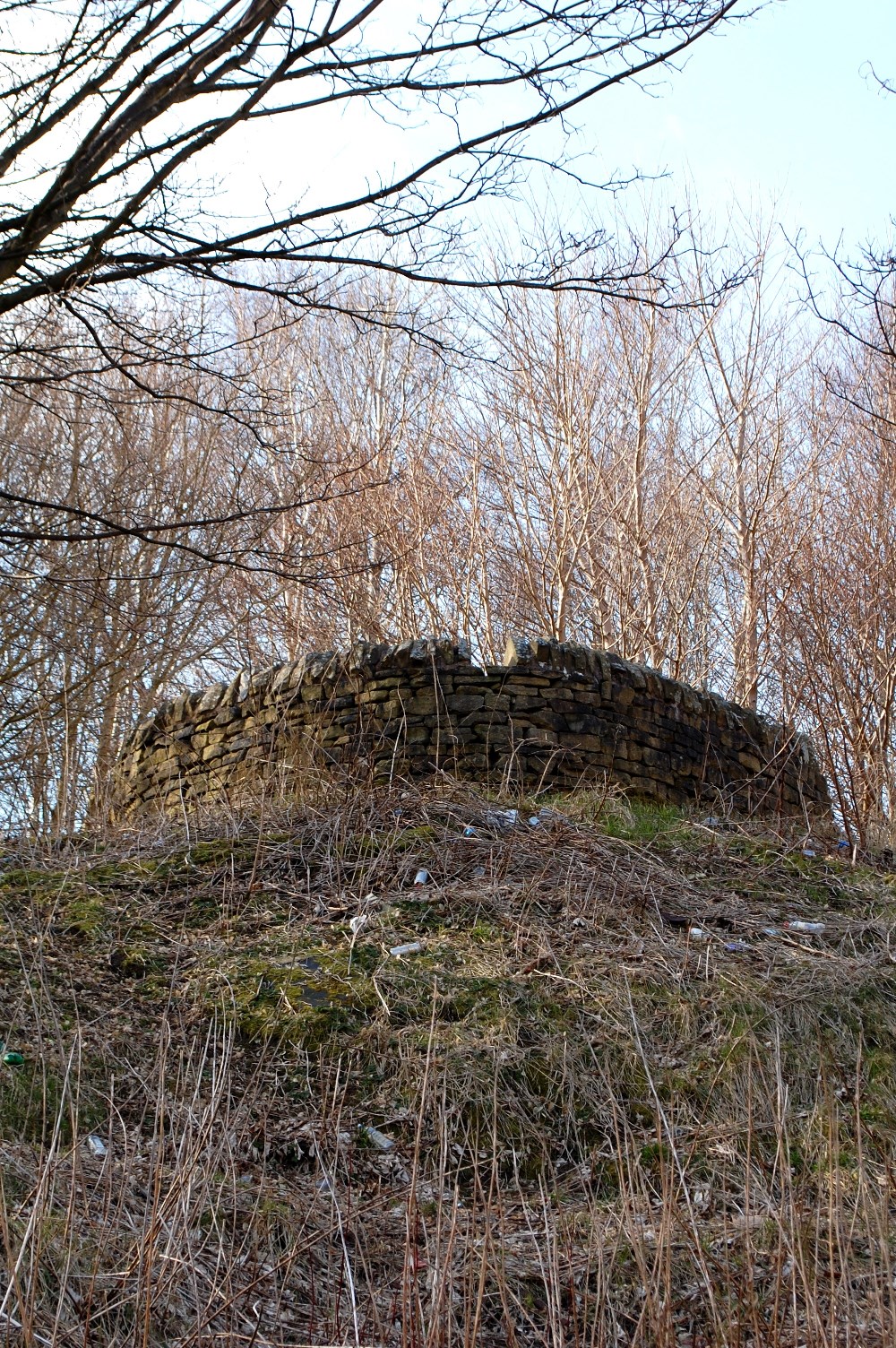 Below; Bit of metal jutting out of the ground in the woods between the camp and the river. 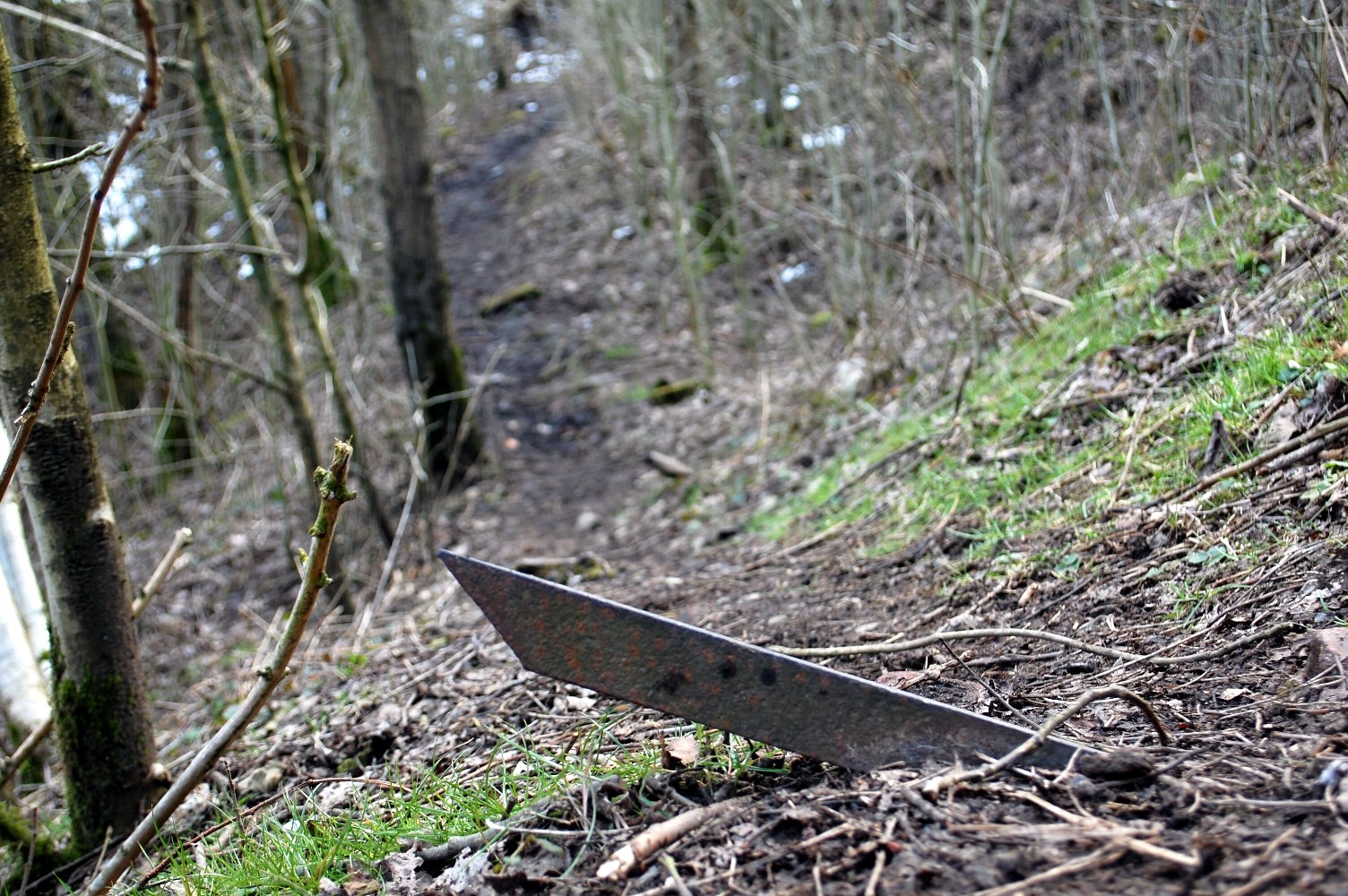 Below; Fence post. Some iron gates nearby appear to date from the war too. 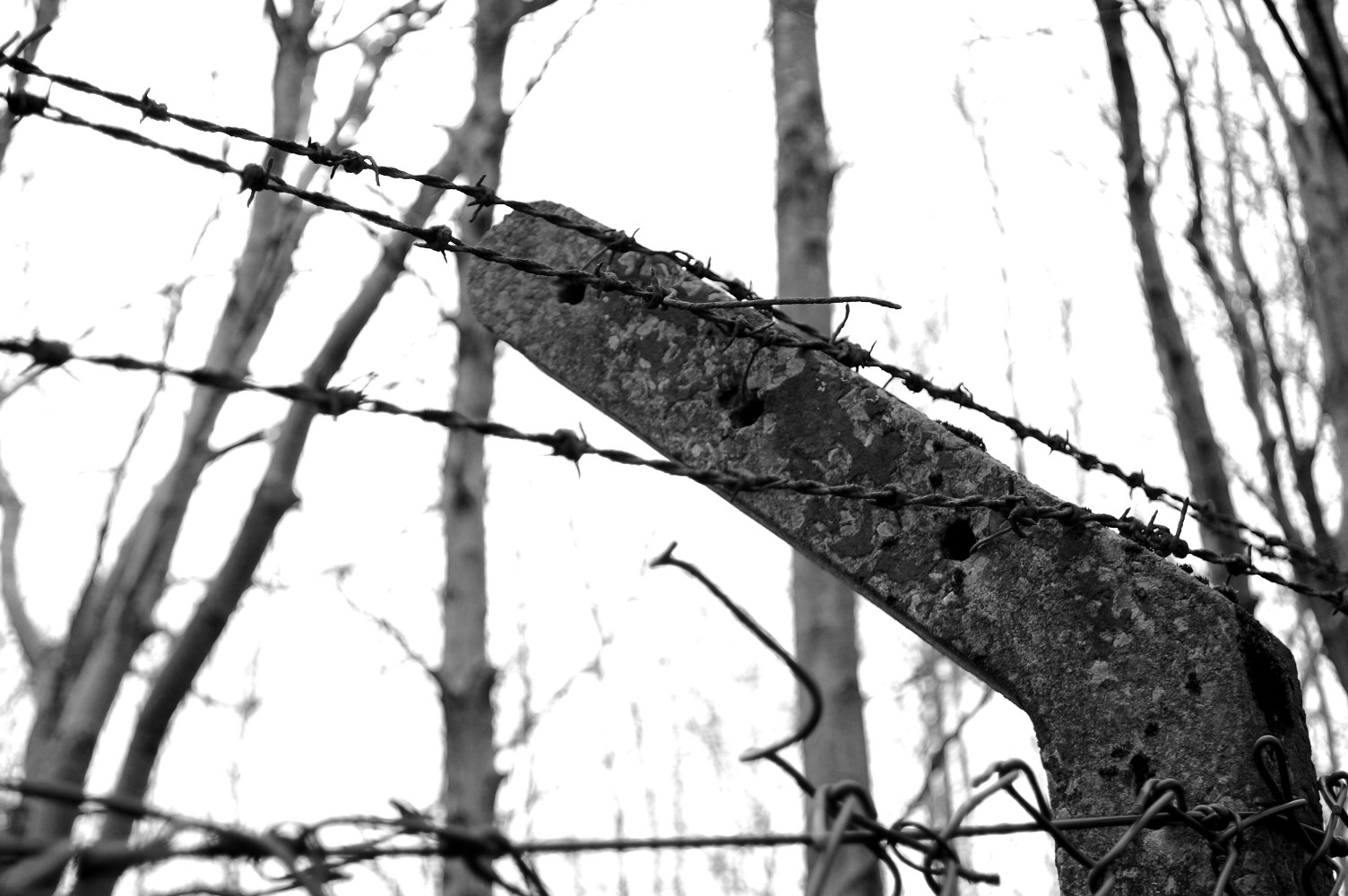 The camp could accommodate around 6,000 inmates and during the course of the war was home to a largely transient population of German and Italian prisoners and also some Russians who had been fighting for the Nazis.

Below; Remains of drainage system 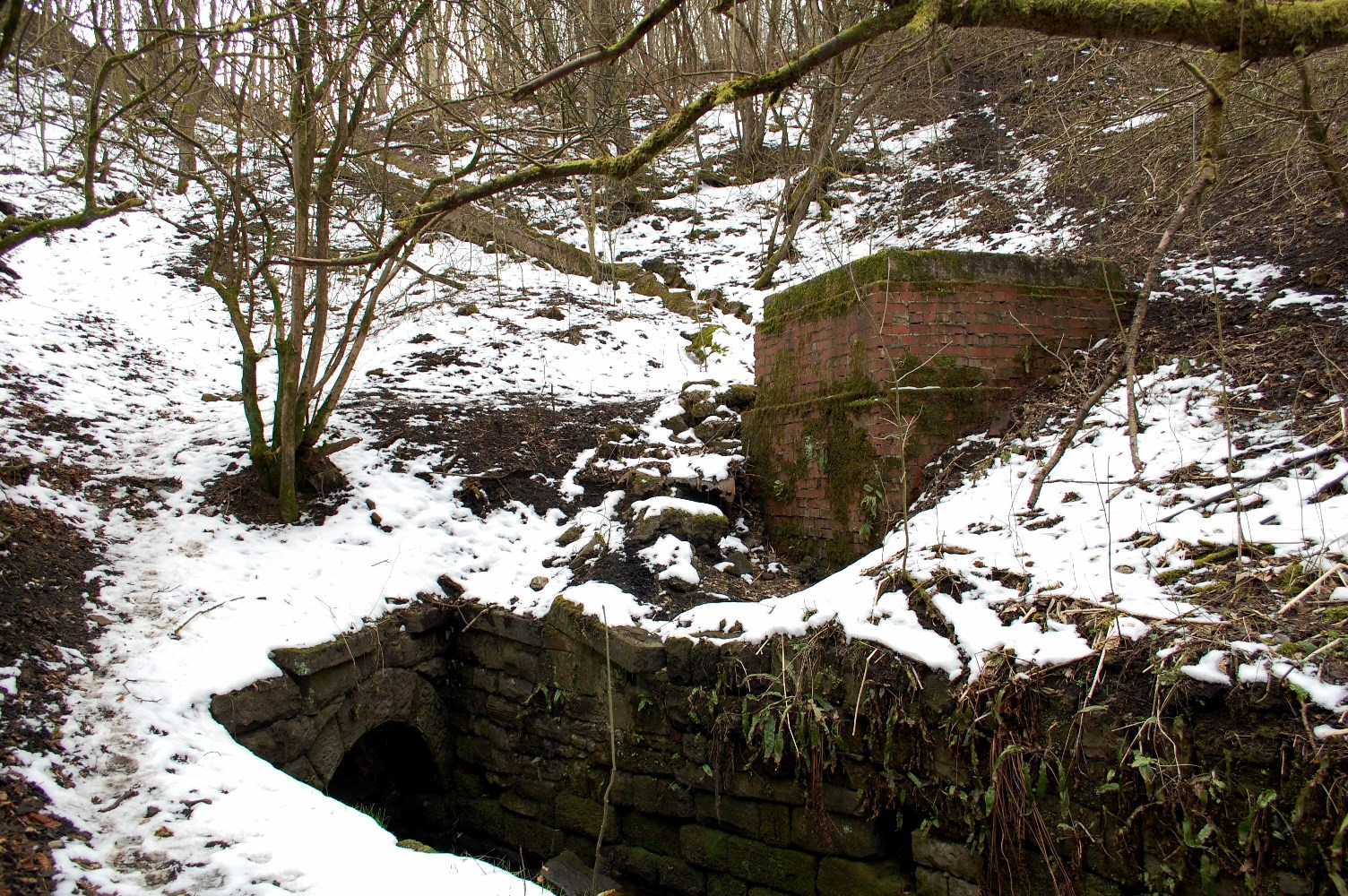 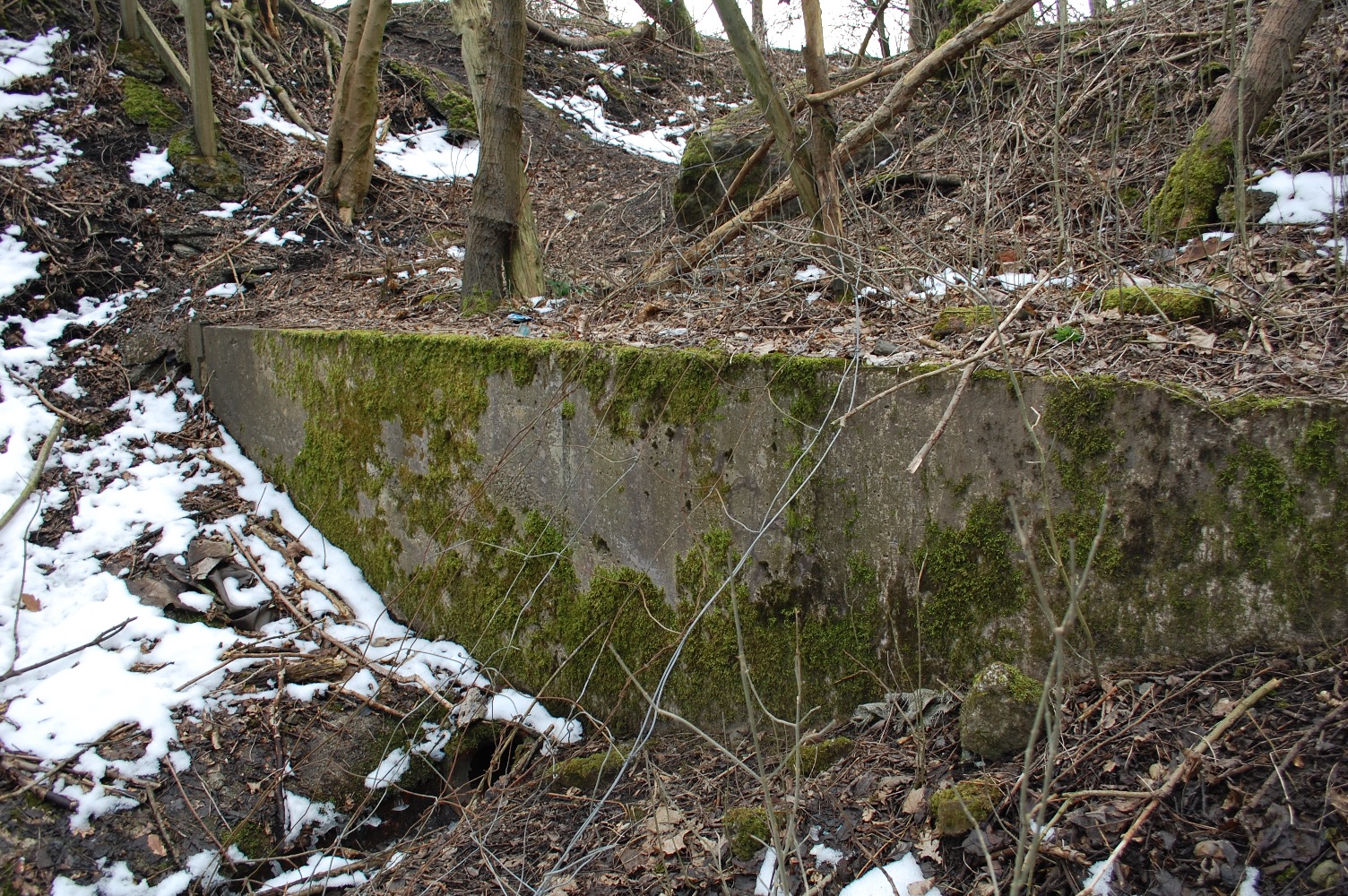 The April 2013 issue of Britain at War magazine tells the story of prisoner Paul Hartmann who was shot dead by Gunner J A Jaffray in February 1945. The incident came after a roll call lasting hours and during which the Germans had obstructed the counting to cover up an escape attempt.

As rain began to fall, the inmates started shuffling forward towards Gunner Jaffray who was at a sentry post and armed with a Lee Enfield .303 rifle. At the inquest, the British said the Germans were restless and being obstructive, refusing to obey orders, singing Nazi songs and insulting the guards. The Germans said they were singing love songs and were not abusing the guards at all!

Either way, Gunner Jaffray challenged the prisoners to halt in their advance towards him. He was ignored and believing he was about to be over-run by the mass of prisoners, he fired from the hip into the crowd. The bullet struck 18 years old Paul Hartmann, killing him instantly.

The article quotes Unteroffizier Fritz Hermann Scheer; “We were jumping about to keep warm. Suddenly I heard a report and felt something on my face. I put my hand up and found blood and bone splinters on my face. My eye and cheek were cut by splinters. In my eye it was metal, in my face it was bone.”

Gunner Jaffray was exonerated at the inquest the following April. That same month, an Italian prisoner of war at Bury was hailed as a hero for giving his life to save that of a young girl from drowning in the River Irwell. 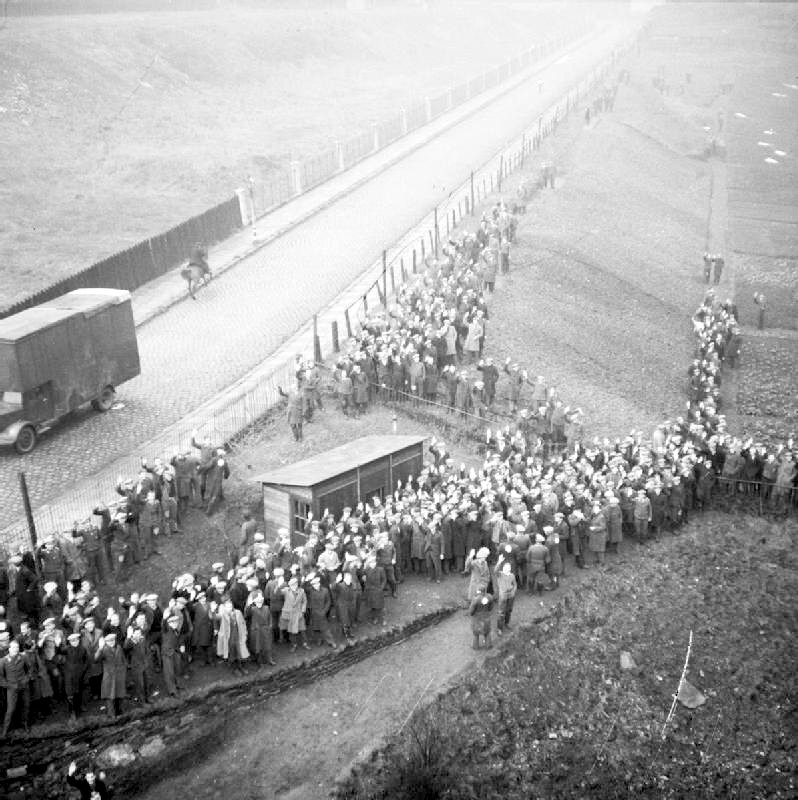 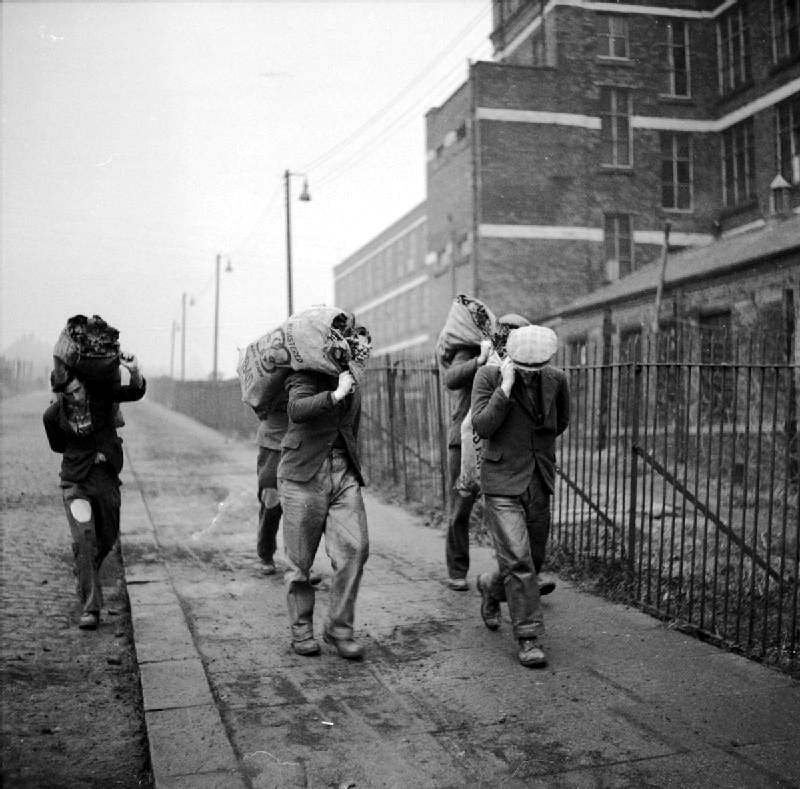 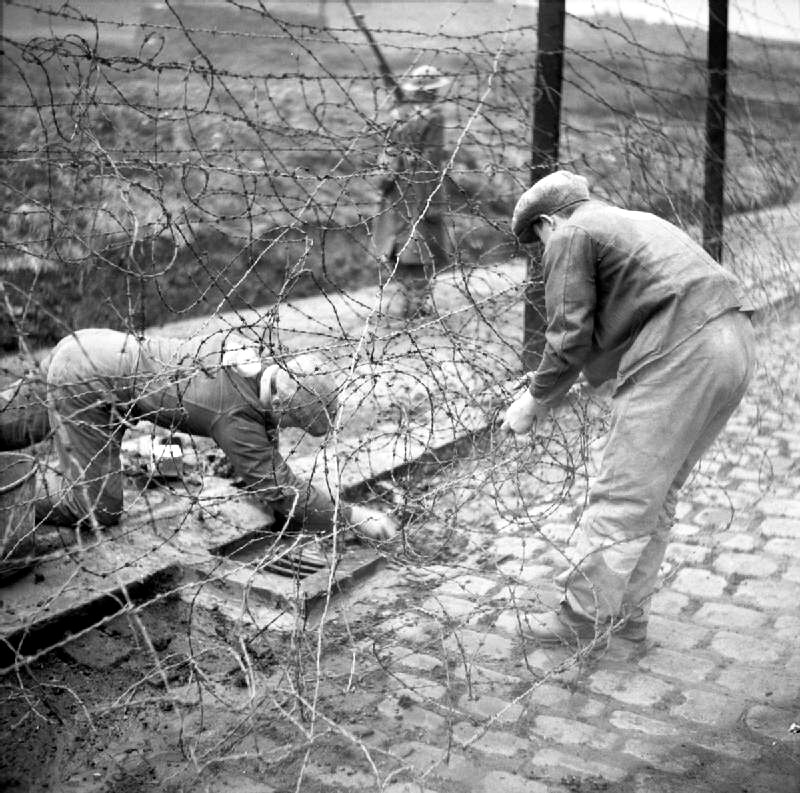 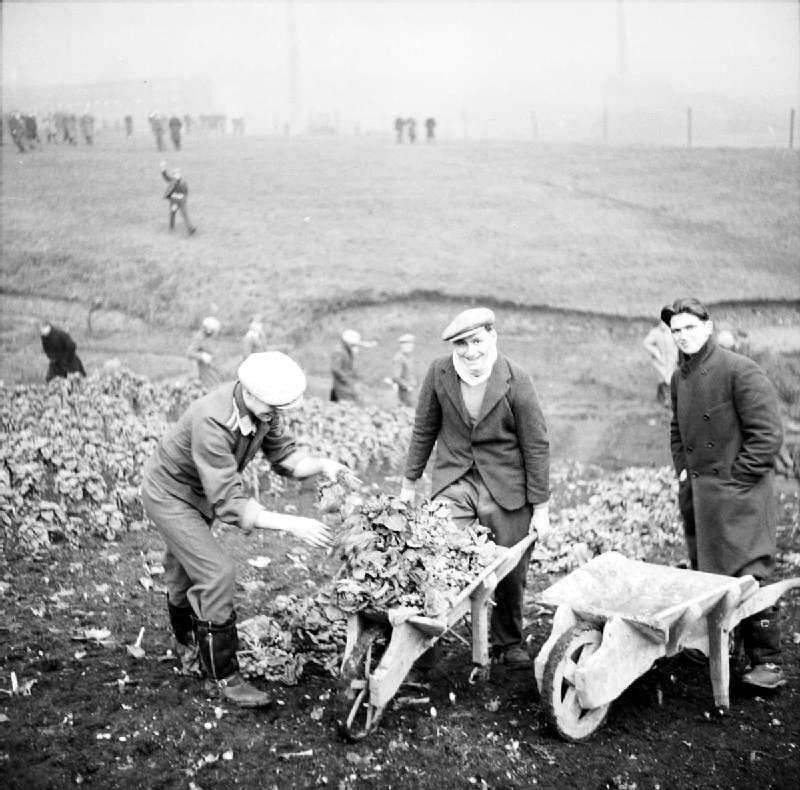 The same day these photos were taken, just a few miles away in Manchester, fire crews were dealing with the results of Luftwaffe bombing raids on the city. This is Piccadilly. Click on this link for more about air raids on Manchester. 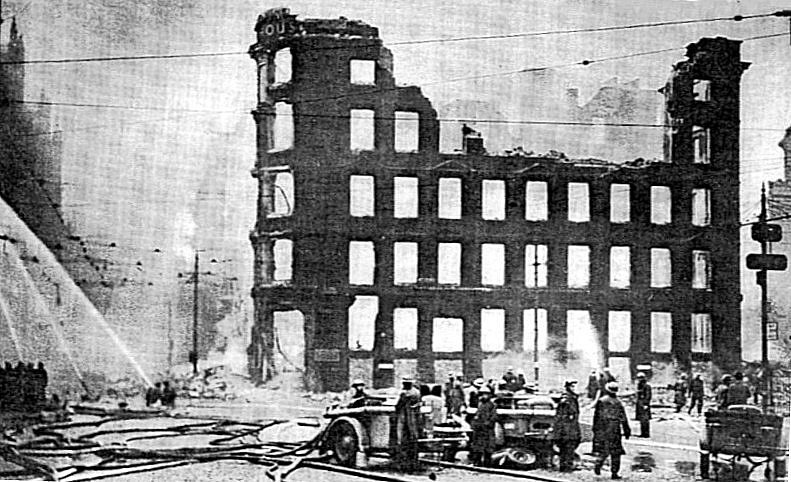 This is part of a Luftwaffe map (from the British Library) for Manchester, showing the camp circled with a note for bomber crews to avoid hitting the area. The note says “Achtung Deutsches Gefangenenlager in Oldham – Leeds” (“Attention German prison camp in Oldham – Leeds”; the cartographer confusing the Oldham place name Lees with that of the city of Leeds) 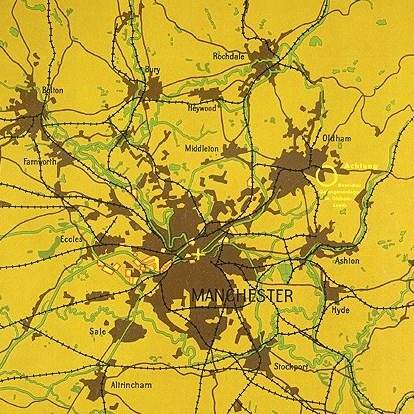 My photos and story of the German Military Cemetery in Staffordshire

Prisoner of War camp at Bury.

This map shows many of the POW camps in Britain. There was one near you!

These 4 images have been provided by James Farrell and are used here with his kind permission. Earlier this summer, Jim was visiting an antiques shop in Bristol and the lady who runs it said she had something “a bit special” which might interest him. It was a sketchbook which has on the front cover the name Friedrich Fraubose and a watercolour painting of the town of Hildesheim which is south of Hannover. Jim says “the book contains a watercolour cartoon history of approx 30 pages from when he first arrived to when he left Glen Mill. The front pages of the book also contain watercolours of places in Germany.”

It is really interesting to get a glimpse Glen Mill from the perspective of the prisoners of war.

Jim also purchased a plaque which has the crest of the Dorsetshire Regiment at centre, with two swastikas, a Luftwaffe eagle emblem top left (without a swastika in its claws) and a German eagle emblem bottom right, again with no swastika. Jim says “The plaque is made of wood and probably made from a cupboard door, it has been made and painted extremely skilfully, and is signed with the initials FF in the bottom RH corner.”

(NB; Jim has kindly sent me all 31 images. I have uploaded all these in a separate page, please see here)

The plaque has the words OLDHAM KRIEGSGEFANGENSCHAFT ENGLAND – kriegsgefangenschaft means prisoner of war. 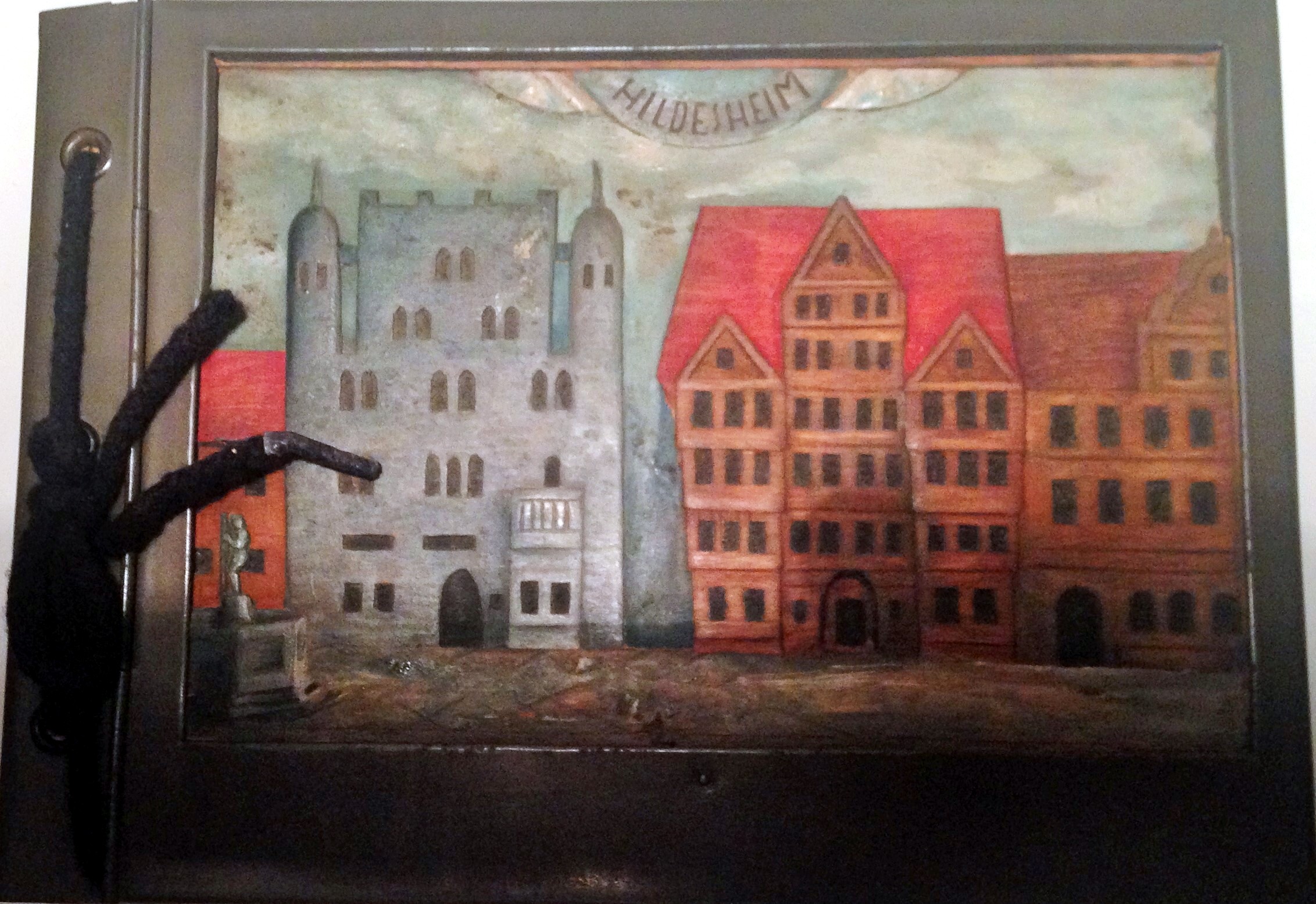 Below; a couple of examples from the book The caption refers to the morning head count to make sure no-one had escaped during the night. 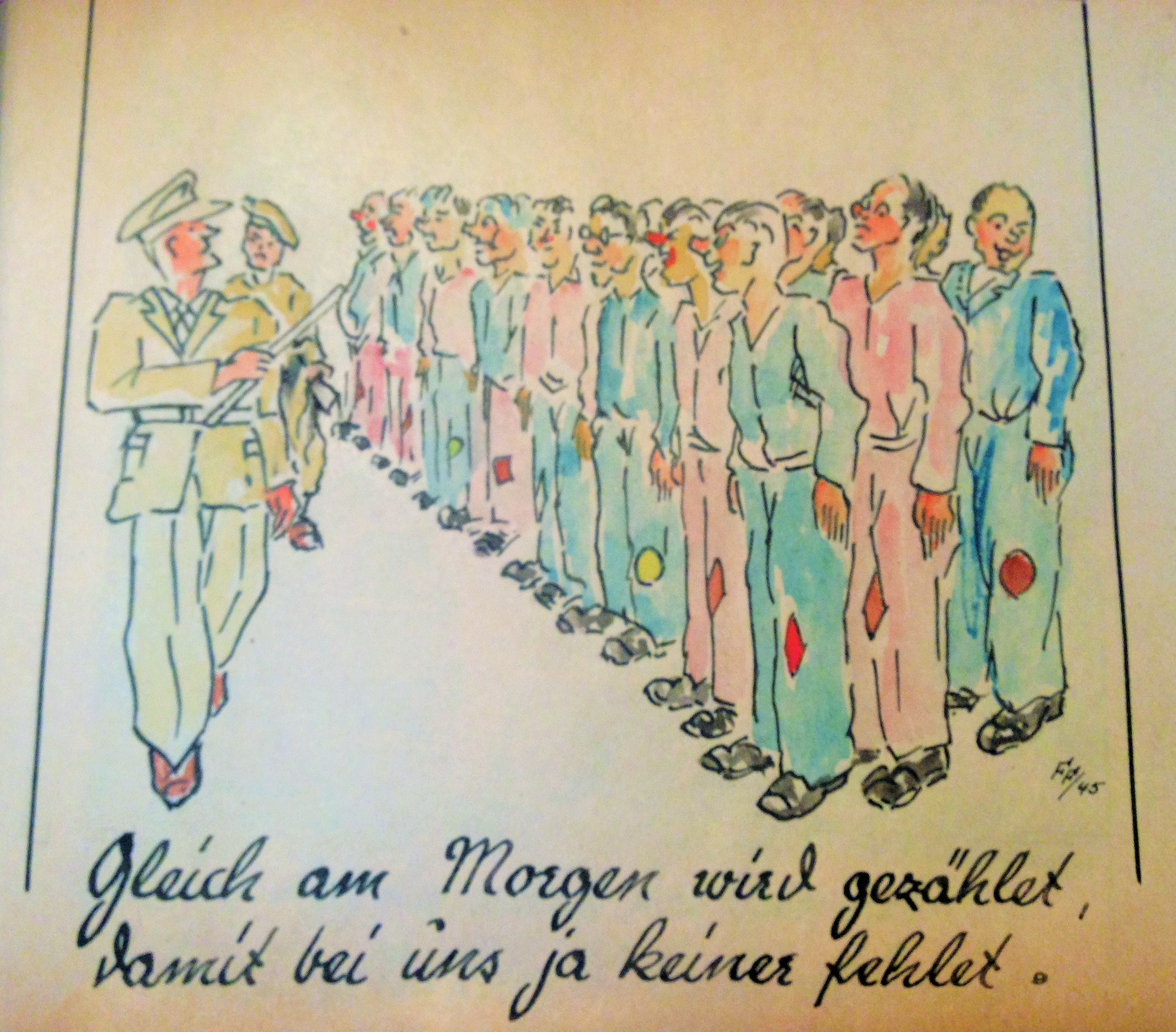 Below; This looks like a carpentry workshop. Note the patches on the uniforms, which were a way of grading prisoners. Compare this sketch with the photo above of PoWS outside Glen Mill carrying sacks; you can see the same patches on the legs of their uniforms. 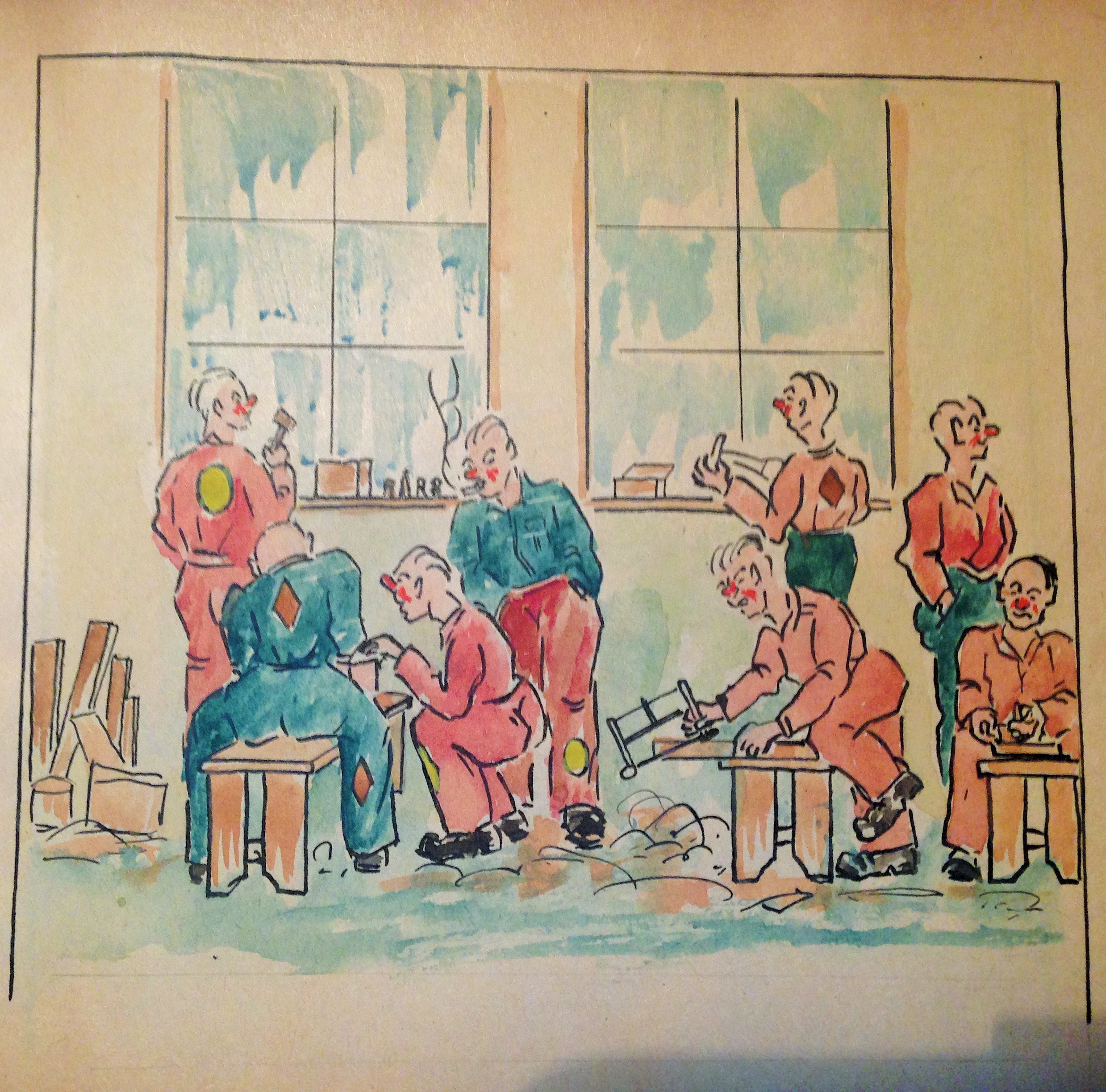 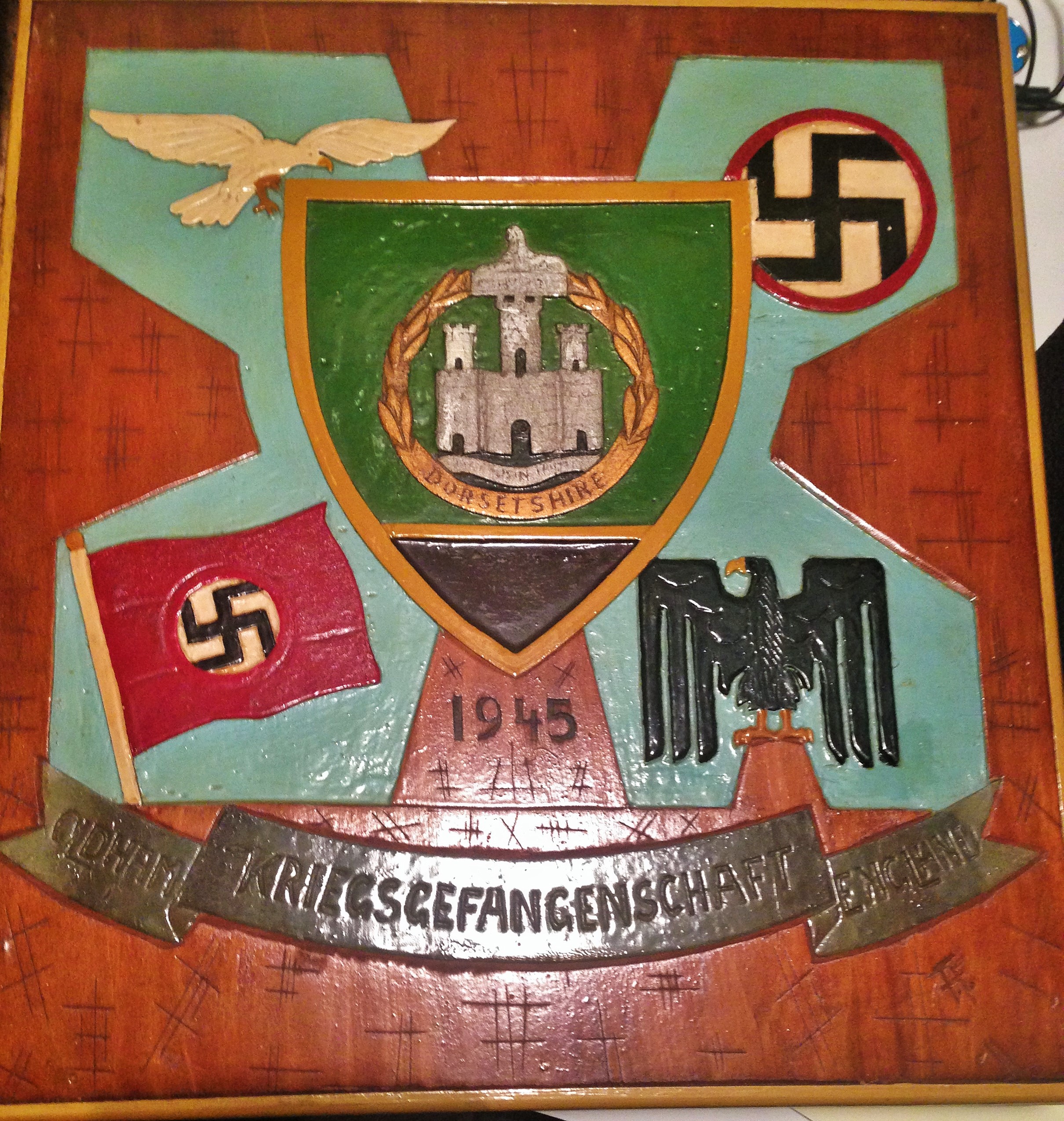 Below; The same day I received the pictures of the sketchbook, I also received this photo of a tankard presented to Lieutenant Colonel W S Tanner OBE, TD of the Royal Pioneer Corps on the occasion of his retirement in 1947. By this time, Glen Mill was a transit camp. Photo courtesy of Dave H and used with his kind permission. 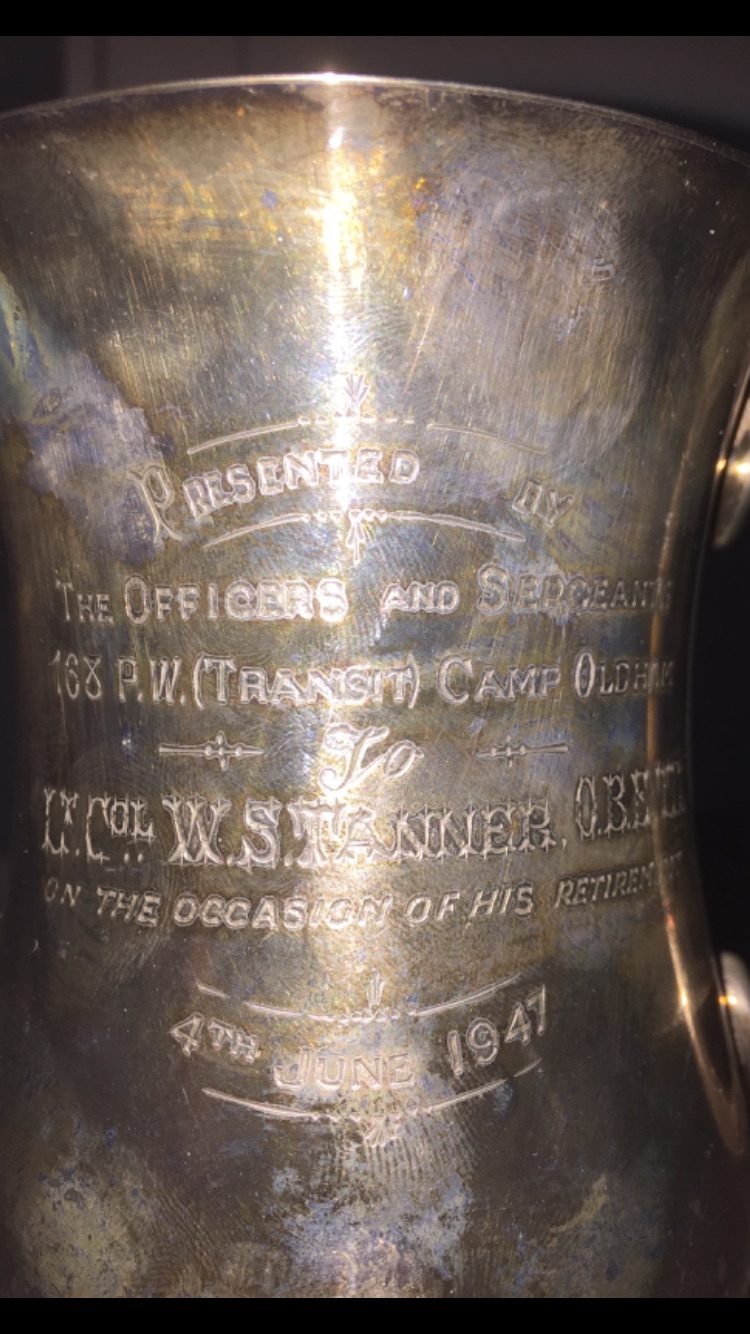 Below is a copy of a handwritten account kindly provided by Mr Steven Kay from his late aunt Mabel Entwistle and refers to her husband John (Jack) Entwistle who was caretaker at Springhead Drill Hall, now Springhead Community Centre (21 Ashes Lane, Springhead, Oldham OL4 4PF).

The account mentions two PoWS from Glen Mill. It is included here as it adds more to what we know about the relationship between some of the prisoners and the people of Oldham.

Mabel wrote “My husband was invalided out of the Army 1946? & given a job looking after Springhead Drill Hall & lived in the adjoining house. Winter of 1947 very harsh the approach to drill hall was snowed up every morning 2 prisoners from Glen Mill were sent to clear the snow. The one who spoke English best was Paul Lebau who had been a PoW for some years, some of them spent in Canada before coming to Glen. He found it an enjoyable change and couldn’t do enough for us at the Drill Hall. On March 1st that year my sister was getting married & we were attending and going in our own little Morris 8? (it was the day before). The PoW was to journey back to Germany for repatriation & his last job he did for us was to polish the little car until it shone, in appreciation for getting him one or two things like coffee etc at the shop as they were non existant in Germany.
The other POW was more of a boy & though Paul had a wife back home this boy lived with his mother & when finally returned home I received a very grateful letter from his mother thanking me for showing kindness to him.
My husband and myself went living in Canada in 1953 & Paul Lebau & us corresponded together.”

Photo kindly provided by David Lonergan showing the funeral of Paul Hartmann, the PoW referred to above who was killed by a shot from a guard’s rifle during a disturbance at the camp. 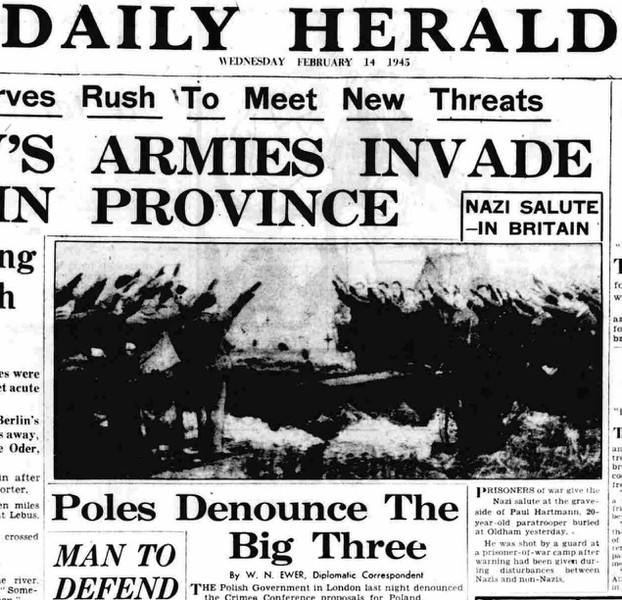 Following on from the watercolour sketches of Glen Mill by a German PoW called Friedrich Frauböse, I have received some other wonderful sketches from Glen Mill by another German PoW whose name was Feldwebel Theodor Vater, a Luftwaffe pilot or crew member.

They have very kindly been shared with us by Sean Claxton, a British tour guide to the Normandy battlefields. They were provided to him by a German tourist, a Dr Pruder whose wife’s uncle was Theodor Vater.

Sean writes,
“Vater was captured on 22nd September 1940 having been shot down over the English Channel. He was seen thanks to releasing some dye into the water, which stayed on him for some time too, apparently.” He adds that he was picked up by the British and spent some time as a PoW in the UK before being transferred to a camp in Canada. Sean says that Feldwebel Vater gave other prisoners English lessons and adds that at 32 he was an older man compared with most of his fellow inmates.

I am hoping to receive some further information about Feldwebel Vater. On the reported day there was apparently very little activity in the air owing to bad weather. A couple of reports state that the only German aircraft shot down was a “lone Ju88 on a photo or weather reconnaissance mission was detected over the Channel south of the Isle of Wight and 234 Squadron from Middle Wallop sent one flight to intercept. The Junkers was shot down and made a belly landing in the sea. All the crew managed to get out of the sinking aircraft and were captured by British authorities.”

UPDATE 14 June 2021 Fw Vater was Beobachter (i.e observer) on Ju88A-1 7A+AM Wn.0352, a weather reconnaissance flight over the English Channel off Newhaven. The crew had sent their report but were attacked at 6,500 feet by a Spitfire at 1315 on 22 September 1940. The Ju88’s starboard engine was hit and the aircraft ditched in the Channel. The crew were able to get into their dingy and were picked up by a trawler ten hours later. The crew initially refused to give up any information about the purpose of the flight.

Photos below are courtesy of a Dr Pruder via Sean Claxton and used with kind permission. Regarding the photos, I have not edited these in any way, they are as scanned by Sean who notes that the 5th sketch was done on a packet of dental magnesium and the 6th sketch was done on the back of a cigarette packet. To zoom in and see them better, just right click over a picture and select ‘View image.’ 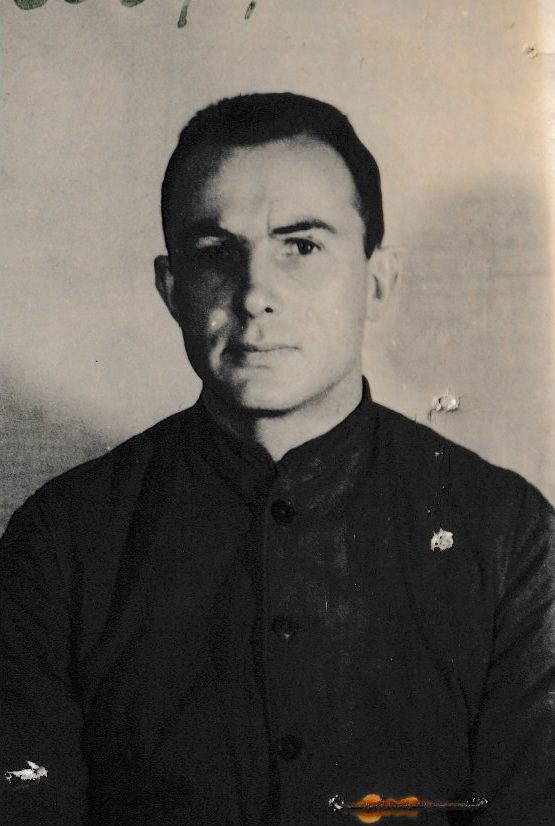 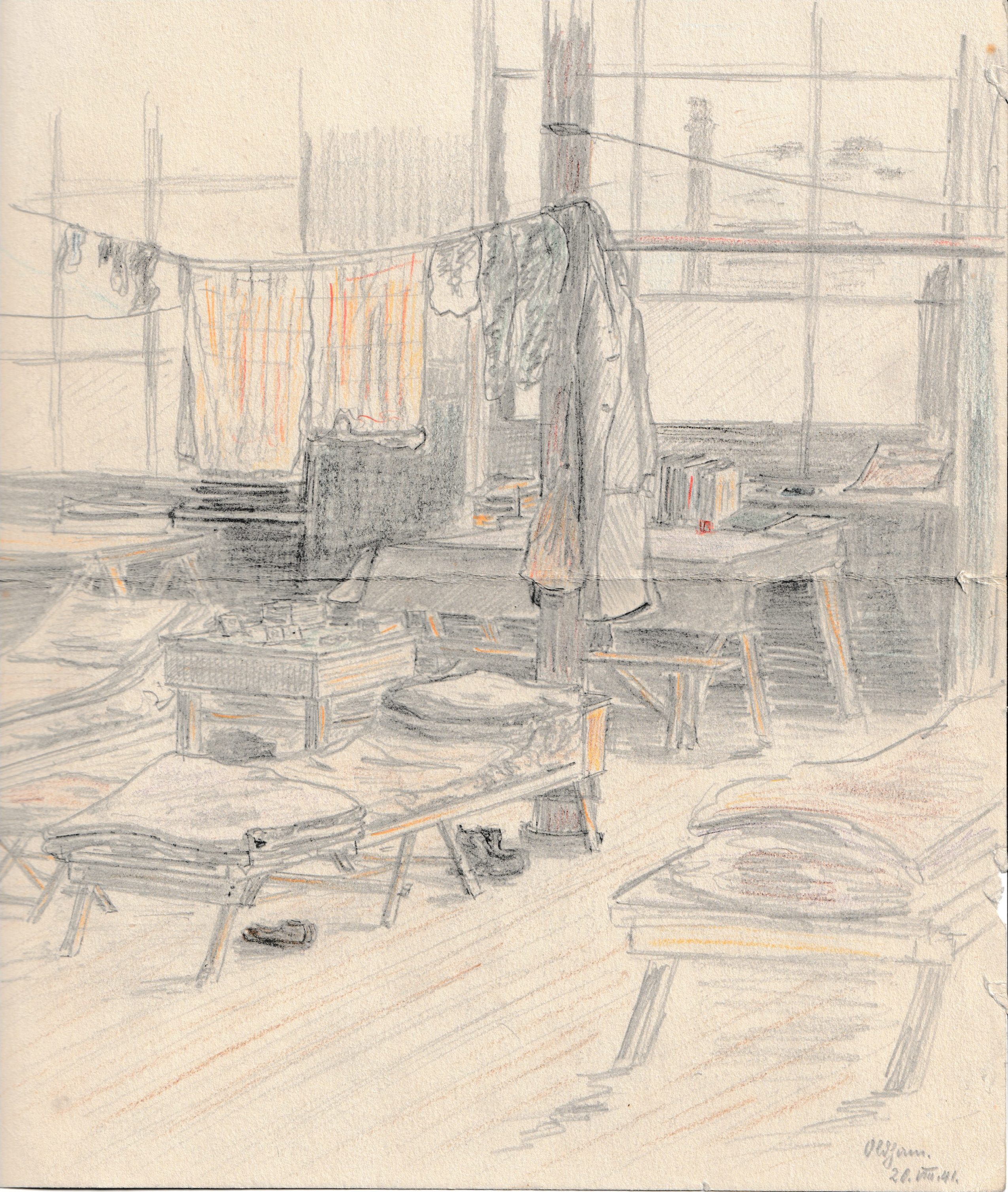 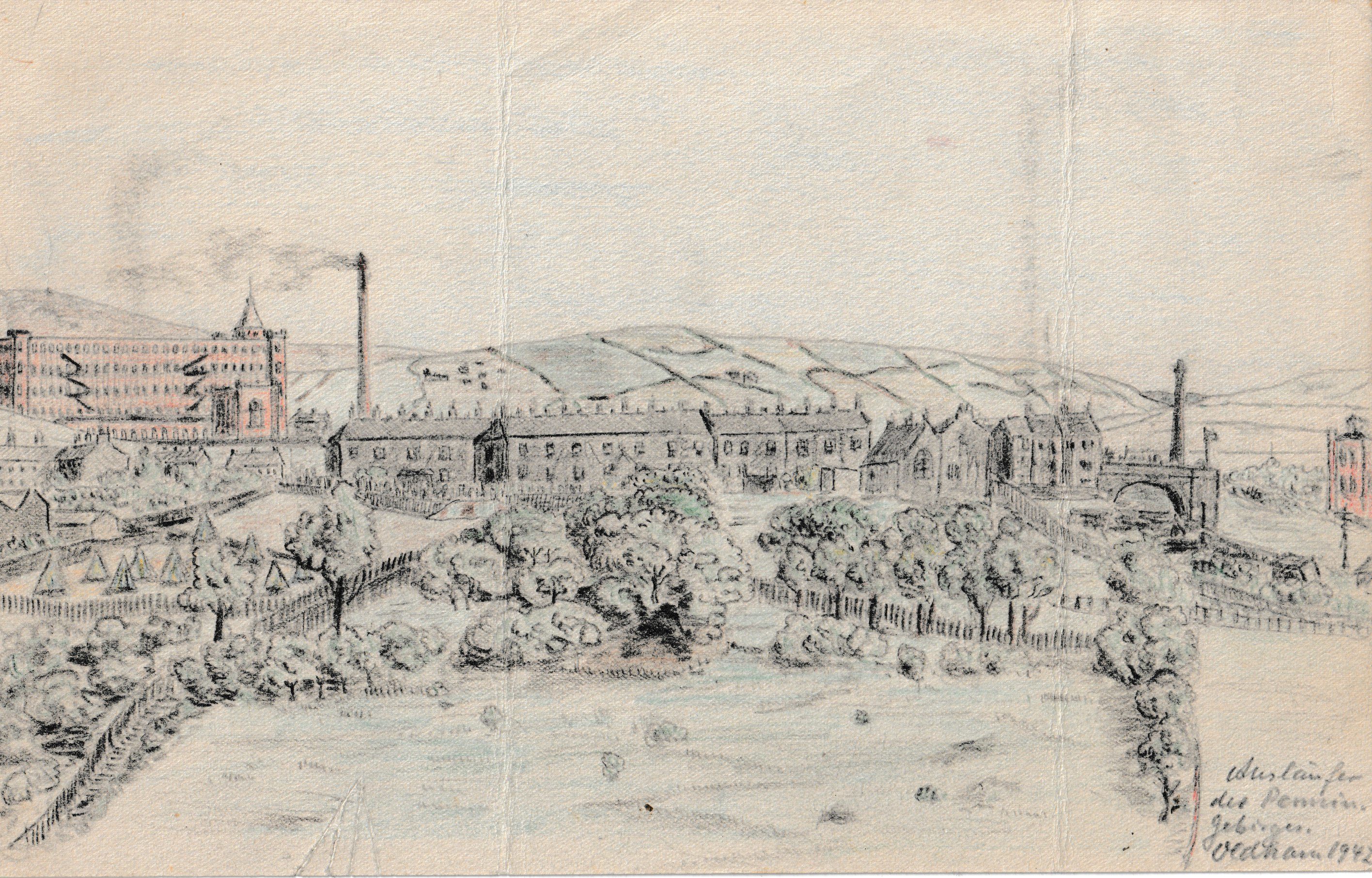 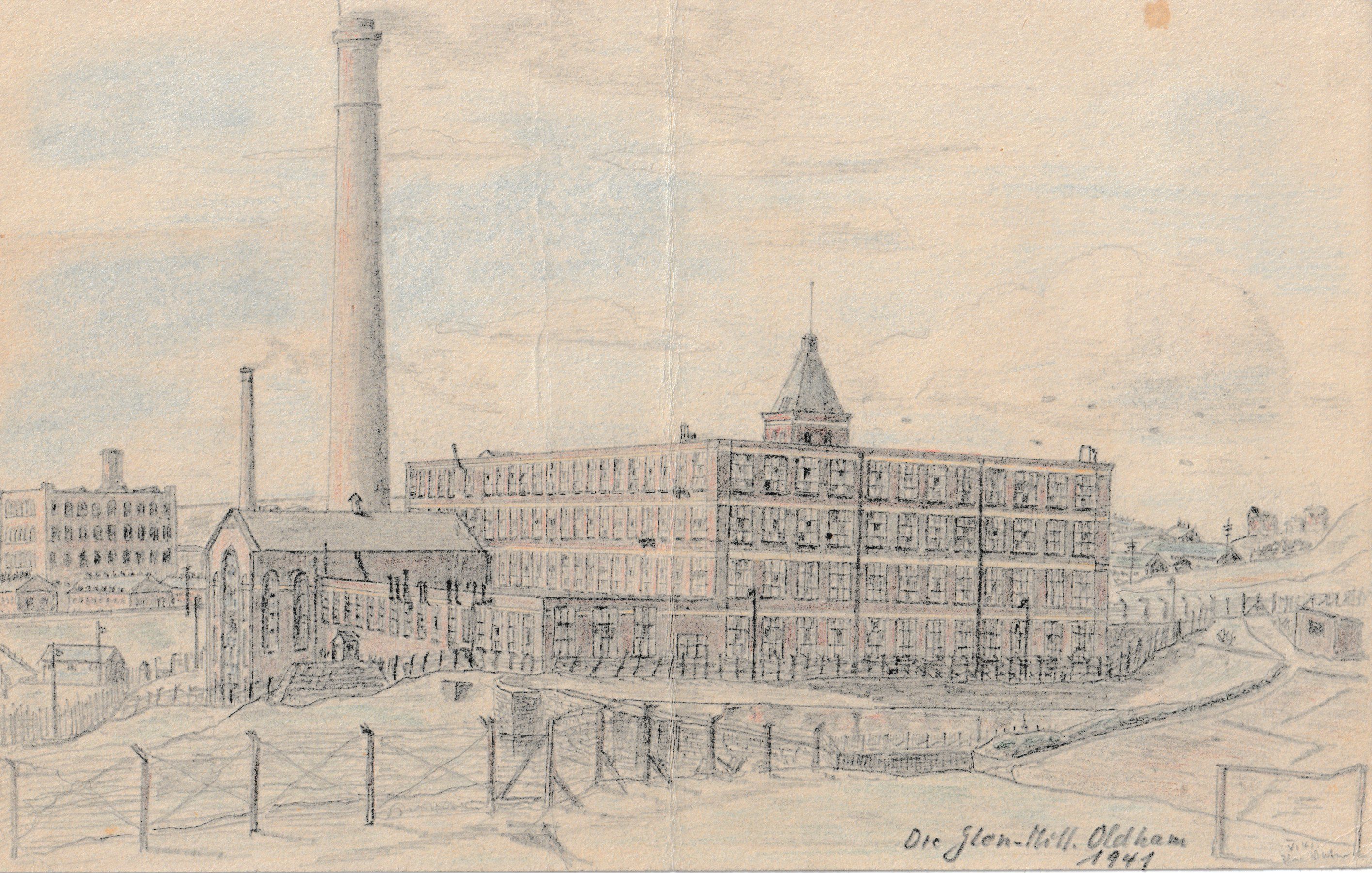 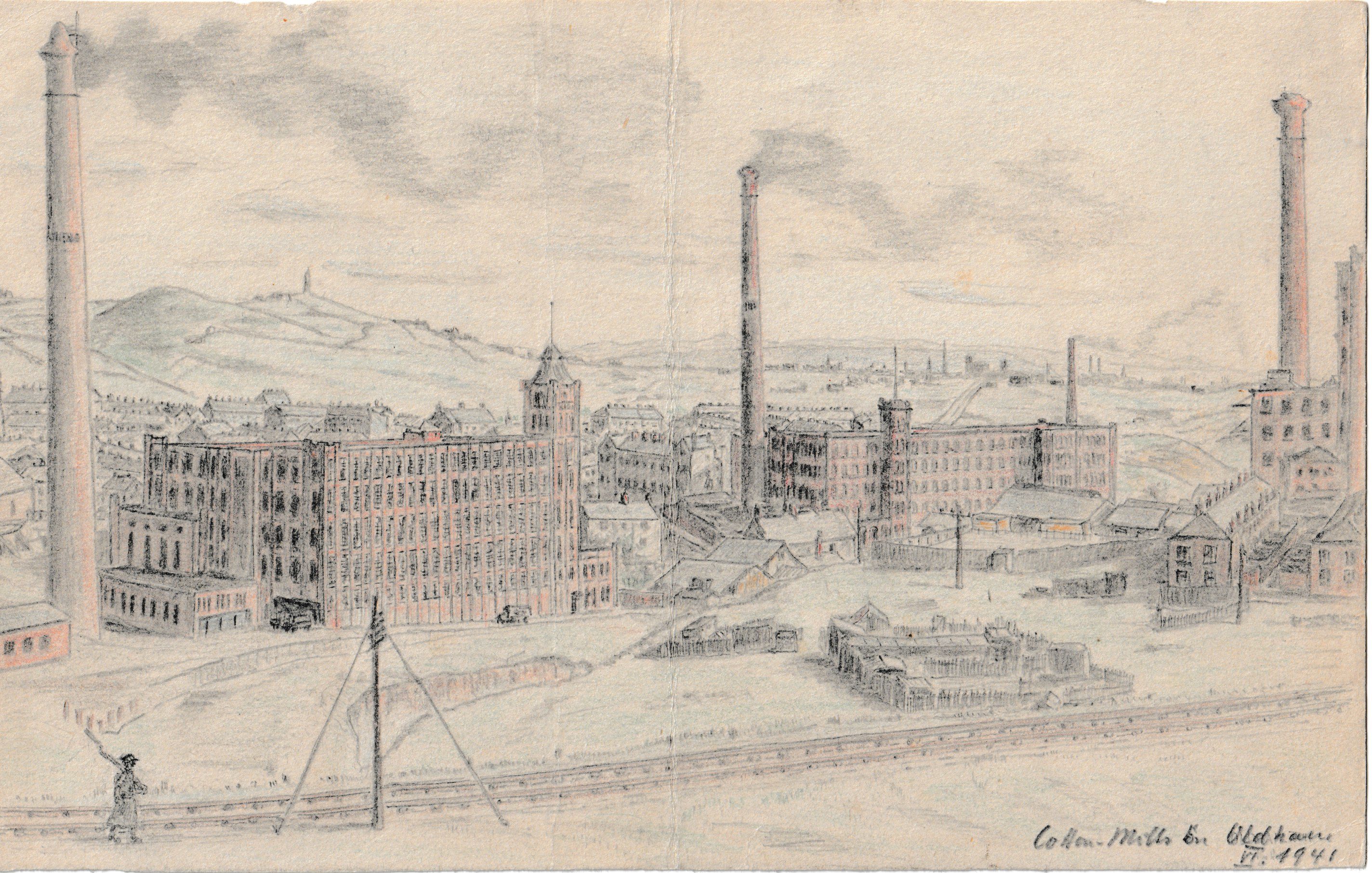 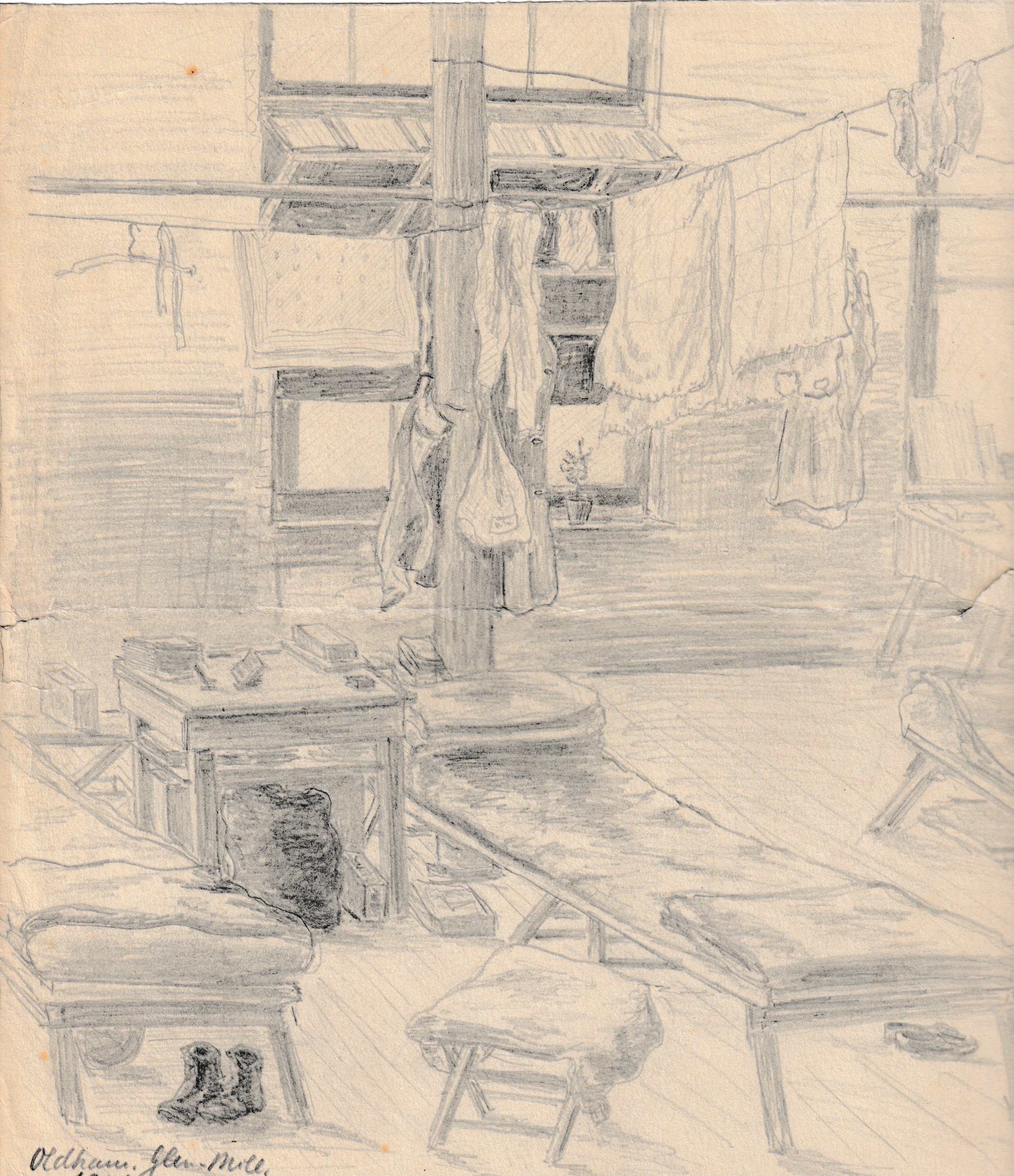