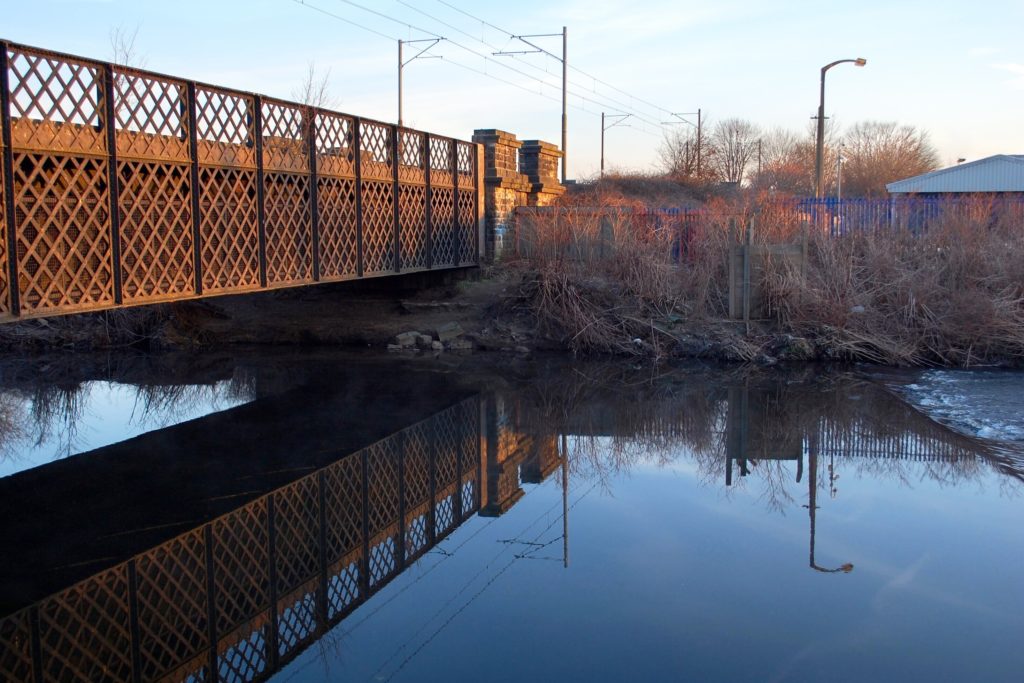 This photo shows Monkey Bridge (which carries the Bury – Manchester line) over the River Irwell at Bury and the eastern corner of what was Warth Mills POW camp. Not easy to see in this light, but by the water’s edge is a small section of the original perimeter wall. This was my stomping grounds as a kid.

The conditions at Warth Mills Internment Camp for ‘enemy’ civilians have already been described here.

After the camp was considerably ‘reconditioned’, German and Italian prisoners of war started to use it. Initially the prisoners were U-boat crews and Luftwaffe crews but after Normandy there was a huge surge in Heer (Army) and SS prisoners. By the time the camp was decommissioned in 1947, over 100,000 prisoners had spent time at Warth Mills.

POWs were categorised according to the strength of their political views and also their role within the Wehrmacht and they wore a patch on their uniform to show that. Those deemed ‘White’ were considered less extreme, Grey POWs were somewhere in the middle and Black POWs were ardent Nazis; SS, paratroopers and U-boat crews were automatically graded Black. Their grading also determined where in the country they went. Those considered to be a greater risk were sent further north (or to North America).

POWs were put to work earning the going union rates for their labour and received the same rations as British servicemen meaning they were better fed than British civilians.

There were several attempts to escape but no German prisoners managed to leave the country. One got as far north as Kendal, while two others made it to London before being caught.

In 1942 a couple of prisoners were recaptured ‘on the moors crouching behind a stone wall’ according to the Bury Times. A Mr Tom Milburn apprehended them. One of the Germans spoke a little English. He grinned and said, “A bit of luck!” Mr Milburn said the German asked him the name of the town they had come from. Mr Milburn told him it was Liverpool. “They both laughed because they knew I wasn’t telling the truth” he said.

In researching Warth Mills, I read through every copy of the Bury Times from August 1939 to August 1945 on microfilm at Bury Library. This is my favourite headline;

It is from November 1944. The Bury Times said “A shepherd named Nutter, who noticed the two suspicious looking characters on the moor notified the police who threw a cordon round the area and recaptured the two men. Unshaven and grimy, the airmen had taken refuge at Grane Heights, Haslingden”.

A third prisoner was recaptured at Stubbins. They were Karl Hanickel, Ernst Geller and Ottomar Kruse. They had used moorland tracks and the thick fog which had descended on Lancashire to avoid capture, planning to head east with the hope of finding an airfield and stealing a plane.

POWs and the public

The people of Bury had some awareness of the prisoners. The odd escape attempt was reported in the Bury Times (which by 1945 was identifying Warth Mills by name) and people would have seen the camp from the train to Manchester. Some people will have also seen, especially after D-Day in 1944, German POWs being marched from Knowsley Street Station down Manchester Road and turning right at Radcliffe Road (at the corner of which there was a public air raid shelter which we used to play in as kids, but it has now been filled in) and on to the camp. Other civilians would have worked alongside some POWs.

The Bury Times of 1st March 1945 had the headline NAZI POW KISSED NURSES IN KITCHEN OF BURY HOSPITAL adding that one had even proposed marriage. Some of the nurses at the Florence Nightingale Hospital in Bury were Irish but all 5 involved were still bound by and prosecuted under the Internees Access and Communications Order of 1942. Most were fined and/or lost their jobs. The prisoners were moved to other camps.

In October 1942, a young lad told his pal that he had seen Italian prisoners with their hands tied behind their backs at Bolton Street Station in Bury. His mate informed the police and he was fined £1 plus paid 15 shillings expenses. Alderman Whitehead told him “You ought to have more sense and be careful in your conversation about war. You never know who is listening.”

(That the same year a mother of 9 children aged between 4 months and 13 years was fined the same amount for neglecting her children, the NSPCC reporting her for going out at night and leaving them all – babies as well – alone in front of an unguarded fire and also for generally not providing adequate food, clothing or maintaining their good hygiene)

Below; Sample of a note for threepence used at Warth camp from this fascinating source for old and rare banknotes
www.worldnotes.co.uk/index.html 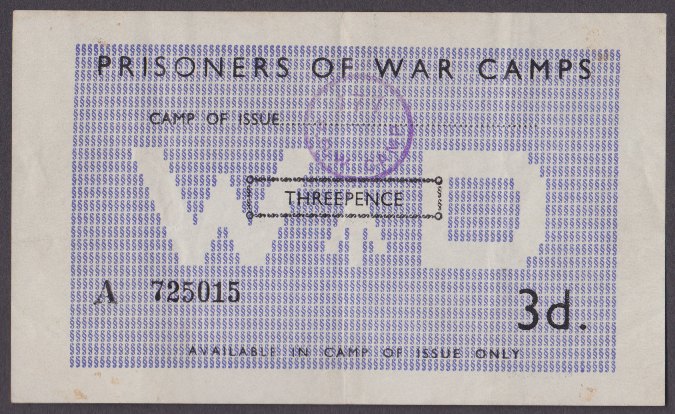 Below. This is about as good as I could get this photo from the Bury Times of 21 June 1944. After the invasion of Normandy, many POWs arrived at camps throughout the UK. The caption beneath read
“Some of the Nazi prisoners captured in Normandy as they lined up (in Bury) before being marched off to the camp. The two youngsters at the front turned their heads away when the picture was being taken. One of the prisoners is still wearing snipers camouflage.” 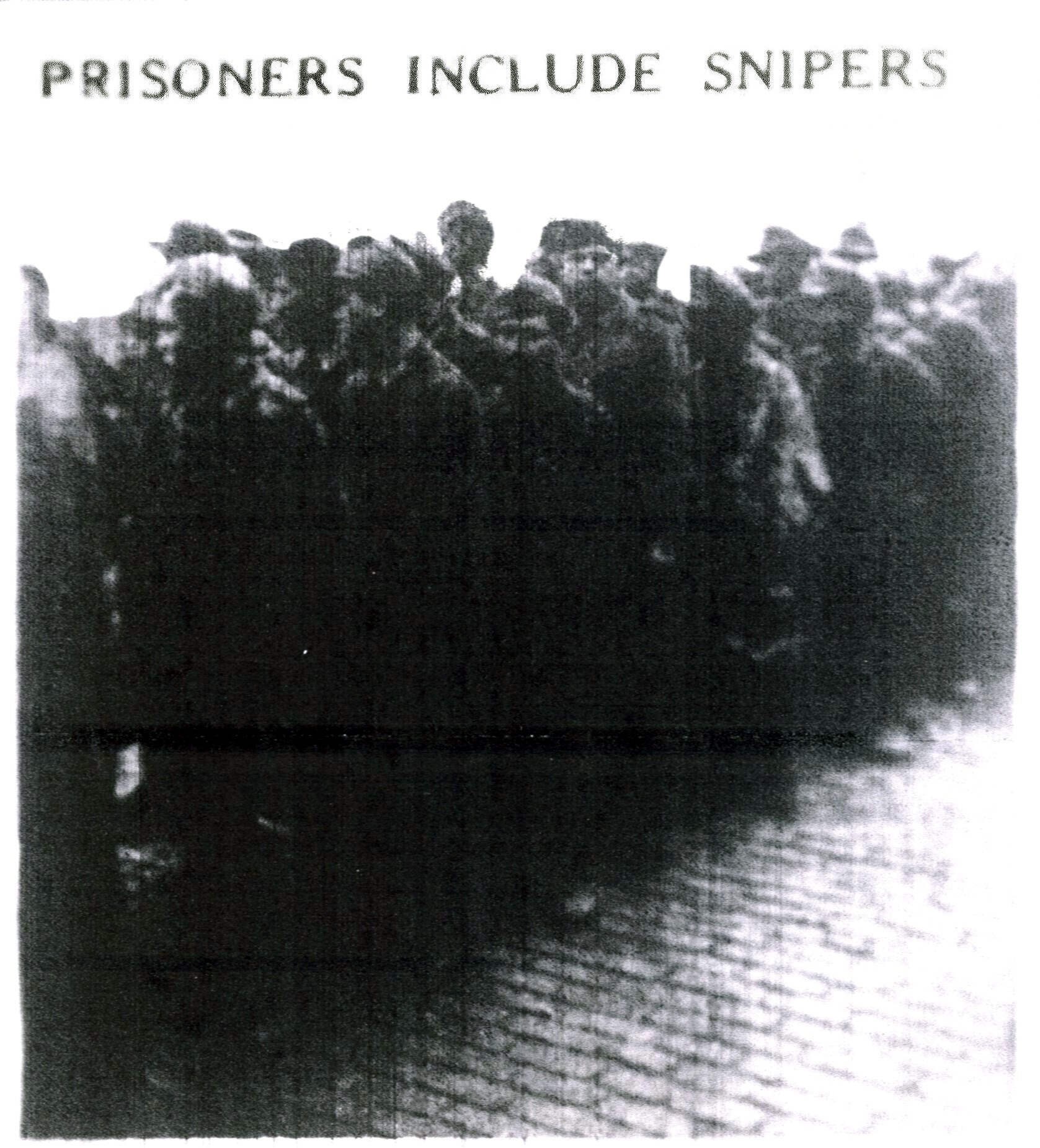 Please see comment below by DeeTee (3 April 2015) and the description of the camp.

This map shows some of the POW camps in Britain.