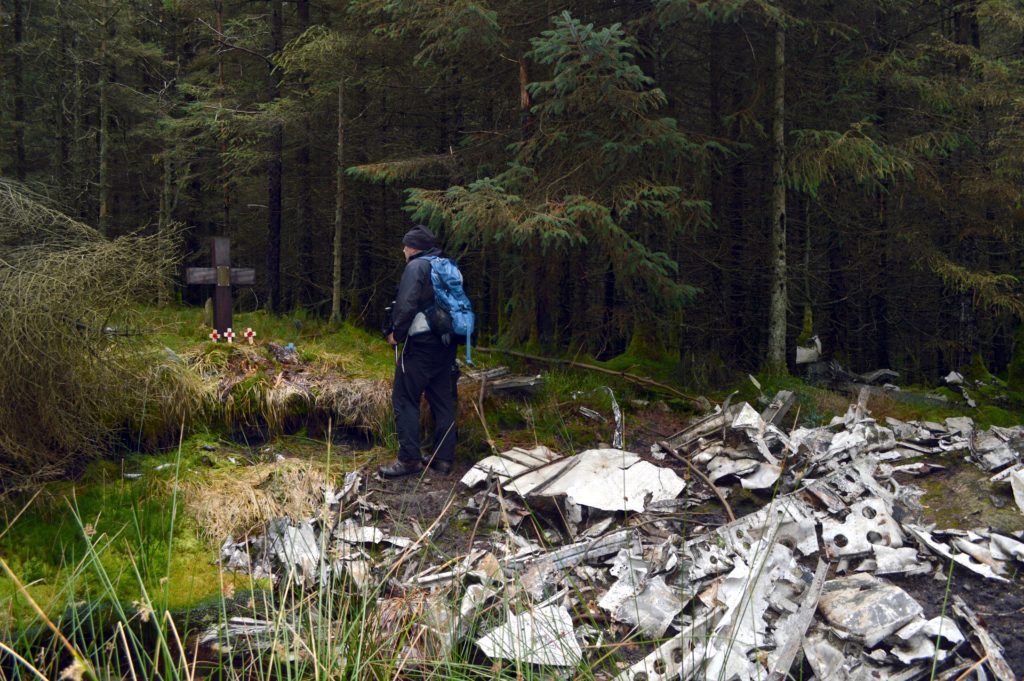 15 October 1944. The crew of Halifax DK116 (1667 HCU) had taken off from RAF Sandtoft near Scunthorpe on a cross country navigation exercise when the port inner engine caught fire. Attempts to extinguish the fire were unsuccessful and the crew prepared to bale out. However only 3 of them managed to leave before the aircraft dived into Glendhu Hill in the Kielder Forest on the England / Scotland border.

Various reports suggest the pilot put the Halifax into a dive in an attempt to put the fire out but from which it failed to recover and/or that the remaining crew tried to save the life of the rear gunner who was allegedly trapped in his turret. But really after the 3 men baled out no-one knows for sure what happened.

I lived at Kielder where my father was a head forester. He was very much involved with the crash of the Halifax as he was also an inspector with Northumbria Police Special Constabulary.

Forestry records at the Bellingham Office show that area was planted during the early sixties. It was not until the Forestry started to plant the fell in the fifties that some of the wreckage was winched out including one of the Merlin engines. As children we used to visit the crash scene.

The first person at the scene of the crash was Mr Adam Steele a shepherd at Willow Bog Farm. He had been at High Long House Farm and was walking home over the fell when the crash occurred.

I have also spoken to Bill Steele, the shepherd’s son. He recalls that on the night of the crash his father had been at High Long House and was on his way home in the dark with the shepherd from there when the Halifax crashed half a mile from them.

They only had a storm lantern with them but the crash site was on fire. The were the first on the scene. They stayed with the three survivors one of whom had a broken leg and one with no shoes on. After a long period a party of locals arrived after a five mile walk from the Forks where they left their forestry jeep. The crew where then taken back to the Forks, one on a make shift stretcher to meet the police and an ambulance.

Bill recalls being taken to the crash site the following day by his father and the wreckage was still smouldering. He remembers the RAF people arriving at Willow Bog clear the site and covered with a camouflage wire net.

The site remained in this state until the Forestry started to plough the fell ready for planting this was done with tracked machines and during this period attempts were made to pull some of the wreckage out but very little was recovered.

Early in the eighties a museum was given clearance to recover one of the Merlin engines (I can’t find out which museum it was) but I spoke to the driver of the machine involved and he says that the aircraft hit a large rock in the peat which caused it to break up. They dug down twenty feet before they found the engine which he says was in a good state as it had been in peat. The engine was then placed on part of the tailplane which acted like a sledge and towed down to High Long House. 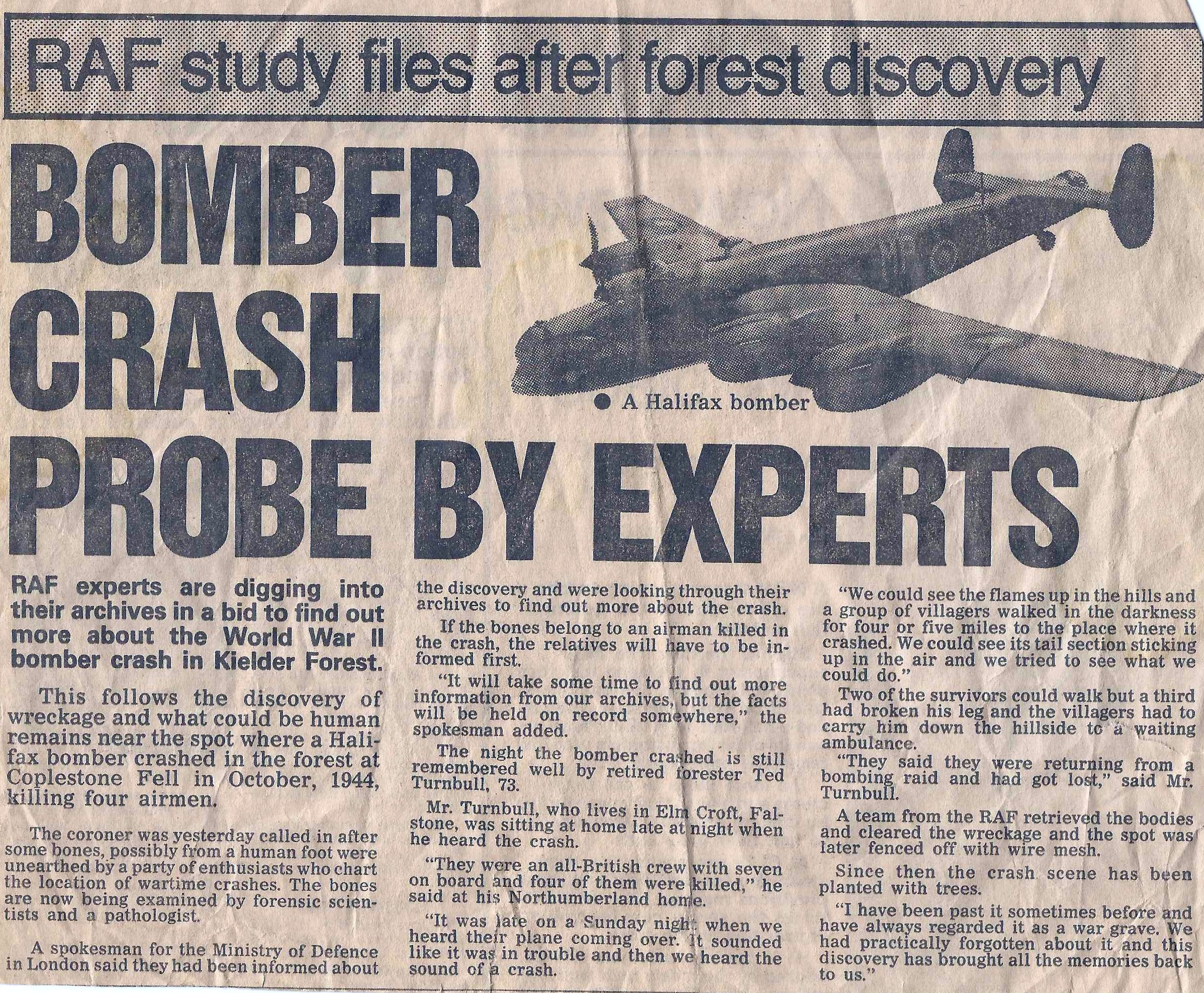 This was a very difficult site to reach, not made any easier by my decision to approach from the west at Roansgreen with what I thought would be a nice stroll over the summit of Glendhu Hill and down to the crash site. It looked easy on paper. Underfoot it was as hard going as anything we had experienced. We expected the forest to be difficult after leaving the trails but the tussocks on the moor were hard work even going downhill, and where the harvesters had felled the trees the land was churned up so much it looked like a WWI battlefield.

Being so deprived of light it is also a difficult place for photography.

UPDATE JULY 2018 see photos further below to see how the crash site looks since all the trees were felled. 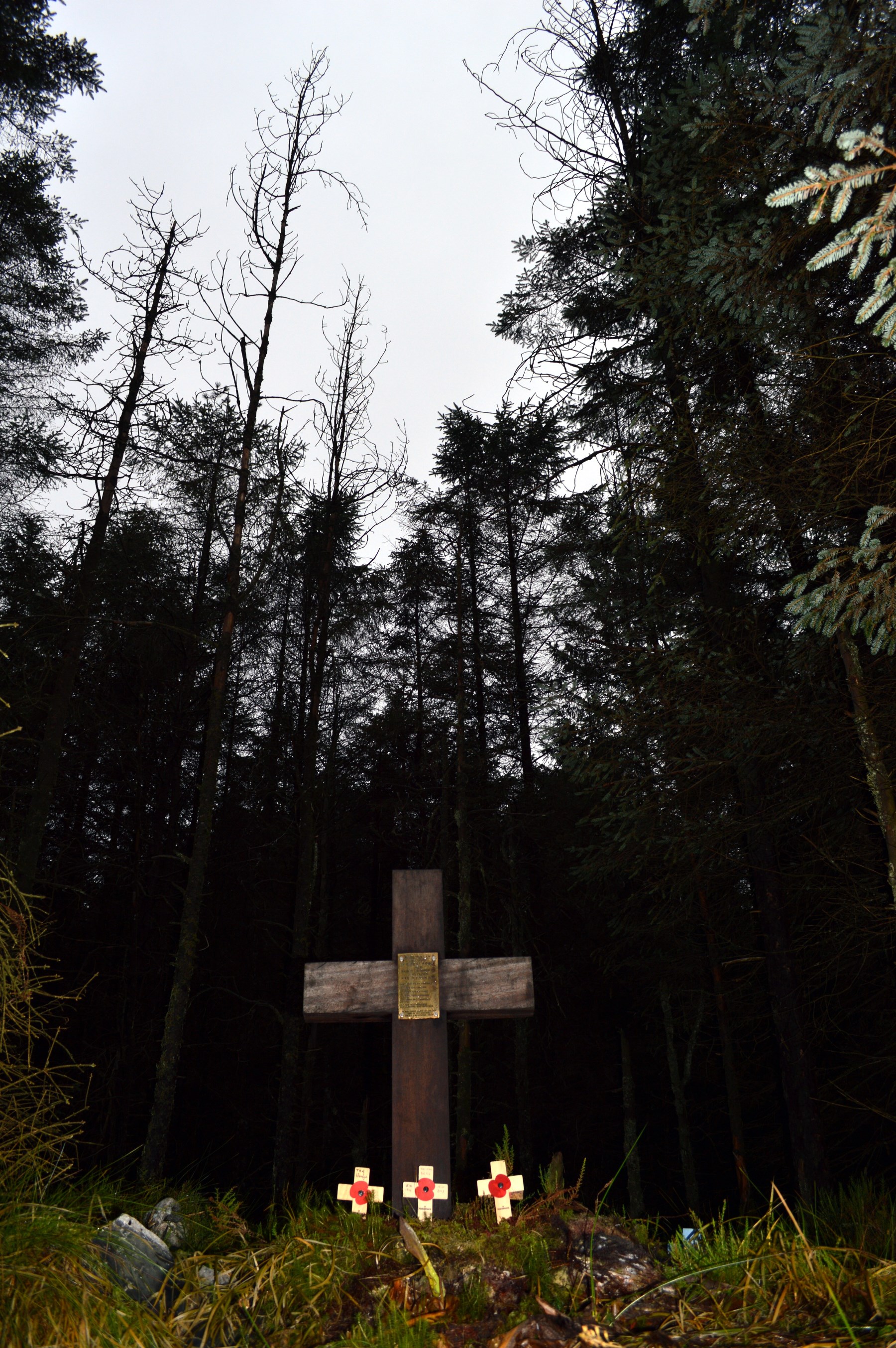 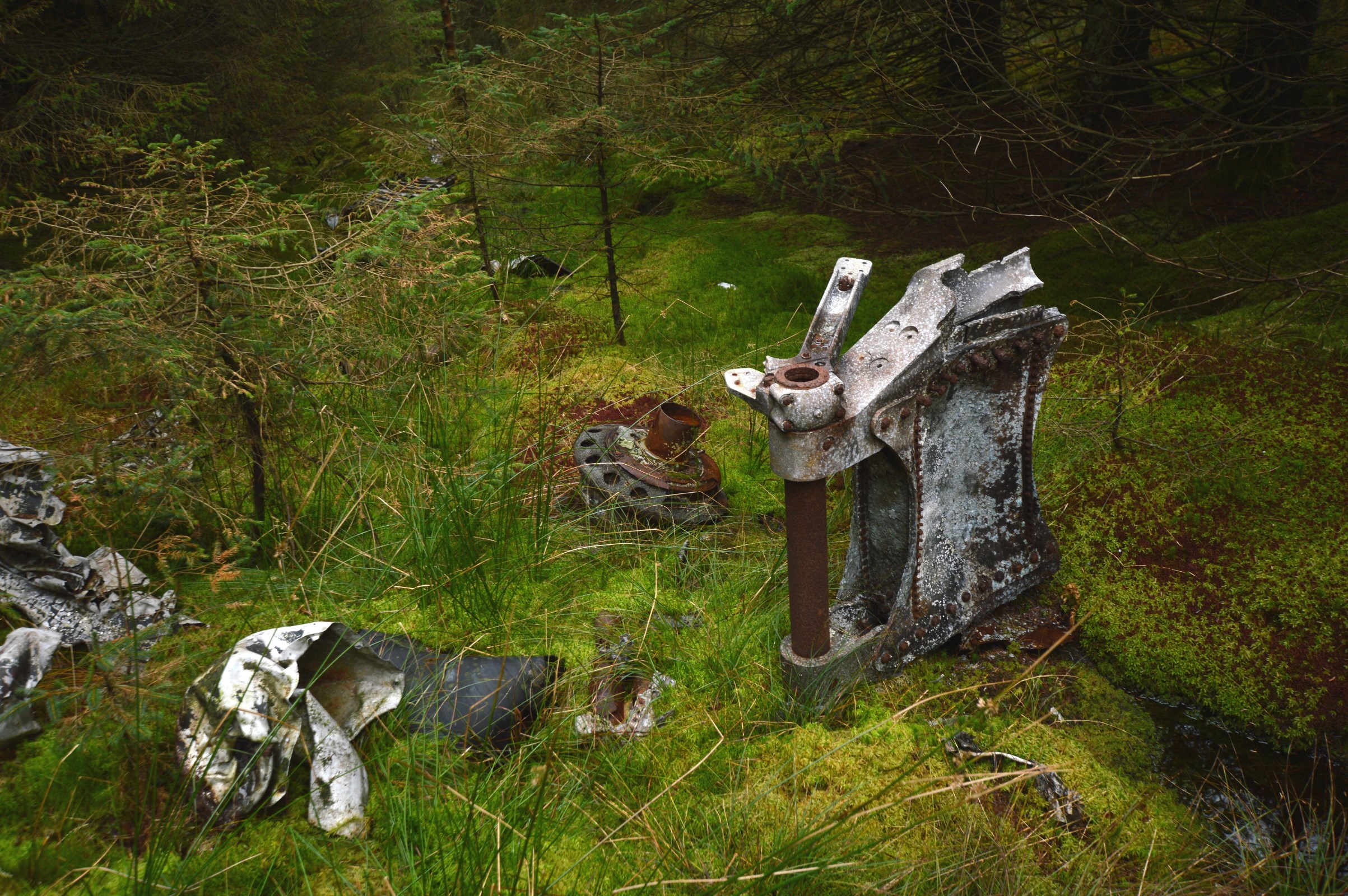 Below; debris in Marven’s Cleugh 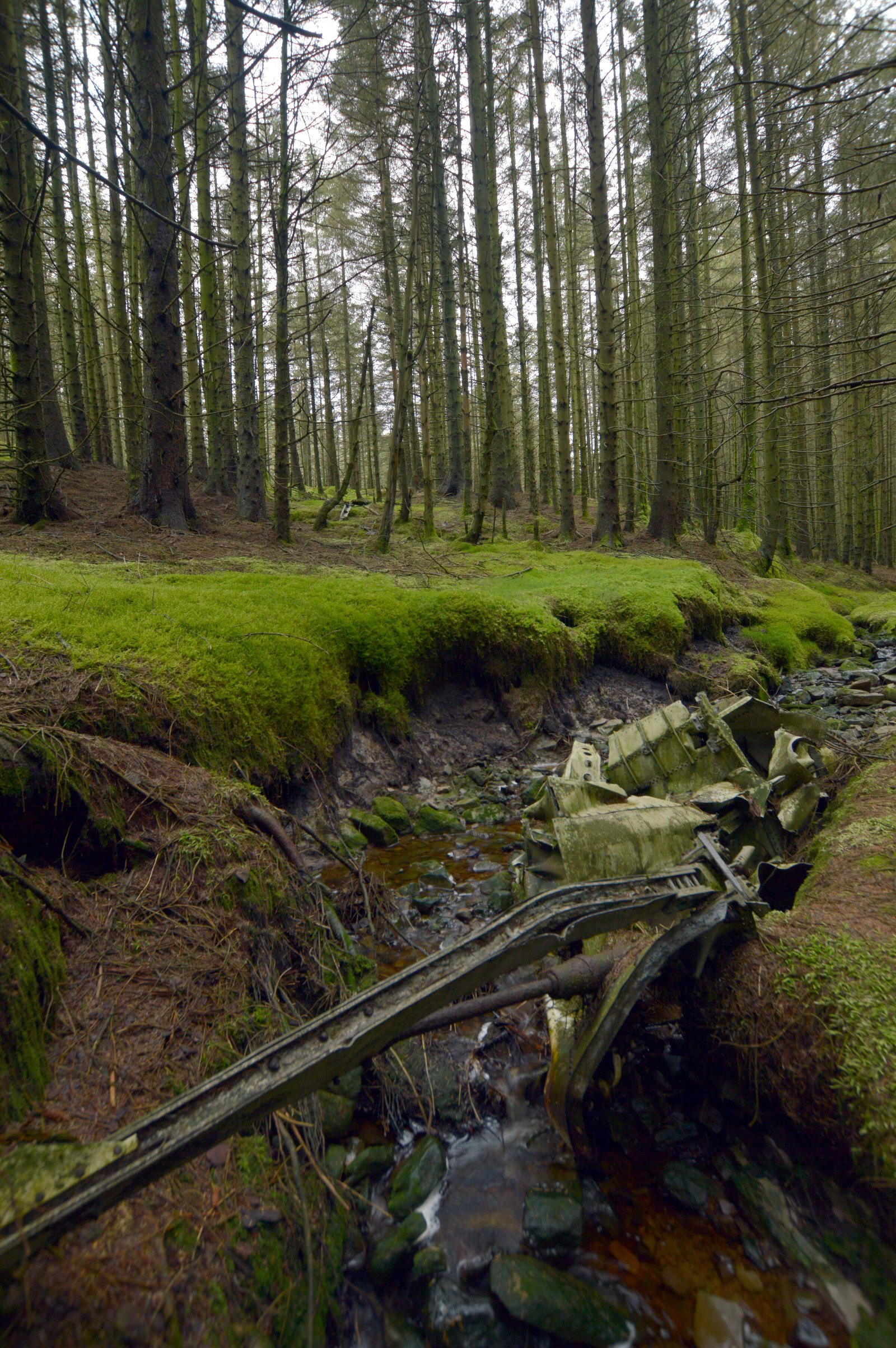 The trees around the crash site were felled some time before Spring 2018. A detail above provided by Mr Wesley Turnbull refers the trees being planted in the early 1960s.

These two photos are by Rob Barker and used with his kind permission. Taken July 2018, the scene is almost unrecognisable to me.

View the rest of Rob’s photos of the crash site as it looks now here. 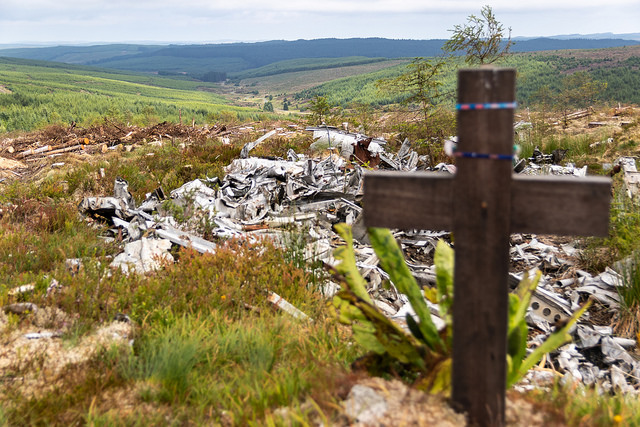 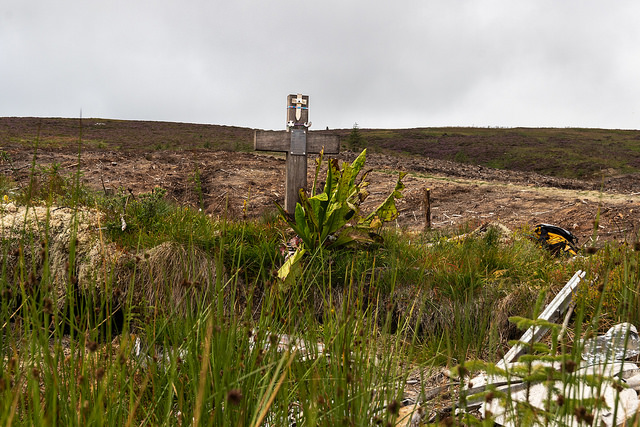 Below; photo of a Halifax bomber taken in 1943. Image from wikipedia commons 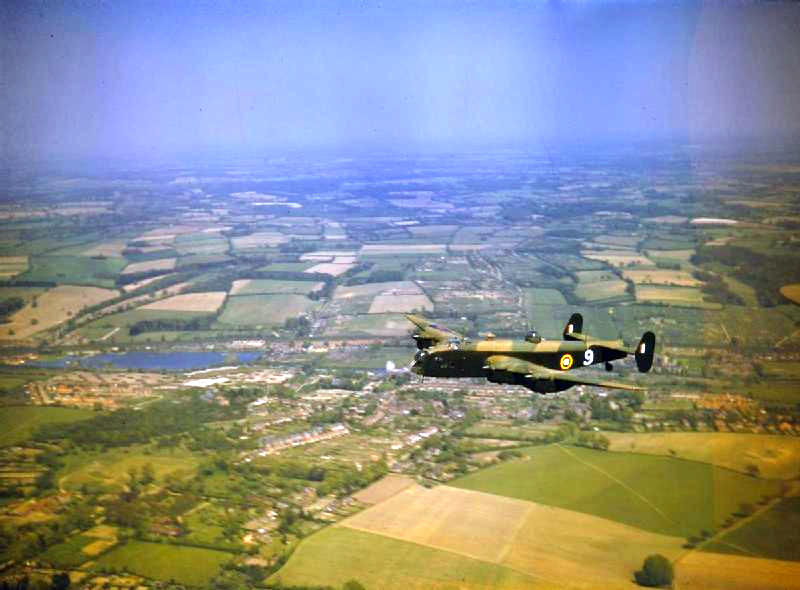 26 comments on “Halifax DK116 in the Kielder Forest”