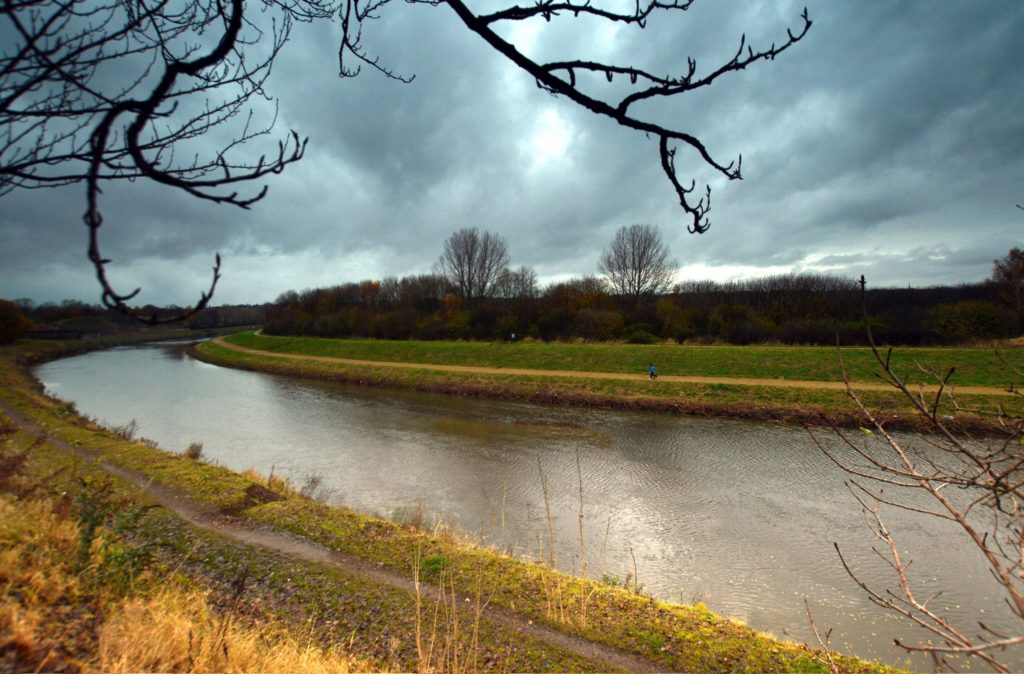 All 7 crewmen and 2 people on the ground were killed when the damaged and bomb laden Lancaster PB304 of 106 Squadron based at RAF Metheringham, Lincolnshire crashed into the opposite bank of the River Irwell here at Pendlebury, Salford on Sunday 30 July 1944. The pilot was attempting to crash land the Lancaster in the playing fields just beyond.

Below; Looking south east towards Manchester. 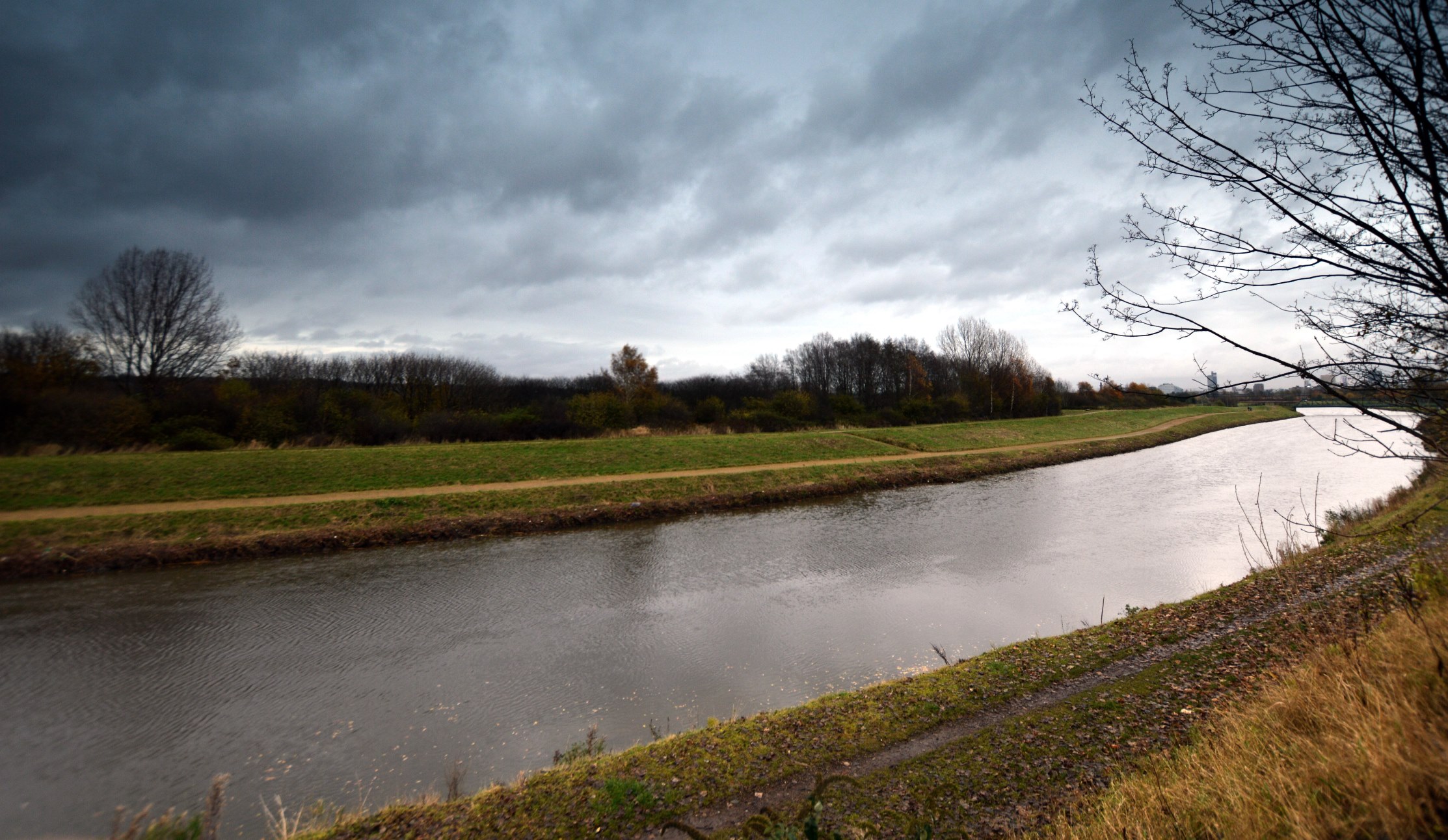 Below; detail from the Salford City Reporter of Friday 5 August 1944.

“PLANE CRASHES ON RIVER BANK
Many People Injured and Much Property Damaged
EXPLOSION HEARD ALL OVER THE CITY
About eighty people were injured, one of whom subsequently died, and considerable damage was caused to property when a British aeroplane crashed and blew up on the bank of the Irwell, near Langley-road, Pendlebury, about a hundred yards from the Salford boundary, and fronting on the Littleton-road Playing Fields on Sunday. The crew of the plane were killed.”

Below; image on display at Yorkshire Air Museum showing the crew positions. The BBC tried to do something similar but chose to use a silhouette of a Halifax bomber taken from an RAF recruitment poster. 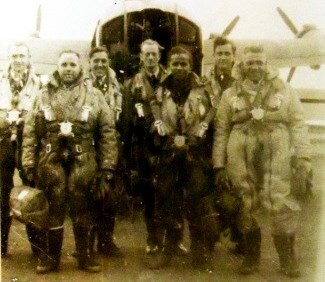 The brand new Lancaster had been on a bombing raid on German positions at Cahagnes in Normandy in support of British troops on the ground. The attacking force comprised 462 Lancasters, 200 Halifax bombers and 30 Mosquitos but due to cloud covering the target area many were not ordered down through the cloud to bomb at low level and returned to base still carrying their bombs. Moreover, the returning crews could not ditch their bombs in the English Channel due to all the Allied shipping supplying the invading forces.

Below; A Lancaster bomber, this is NX611 “Just Jane” at East Kirby 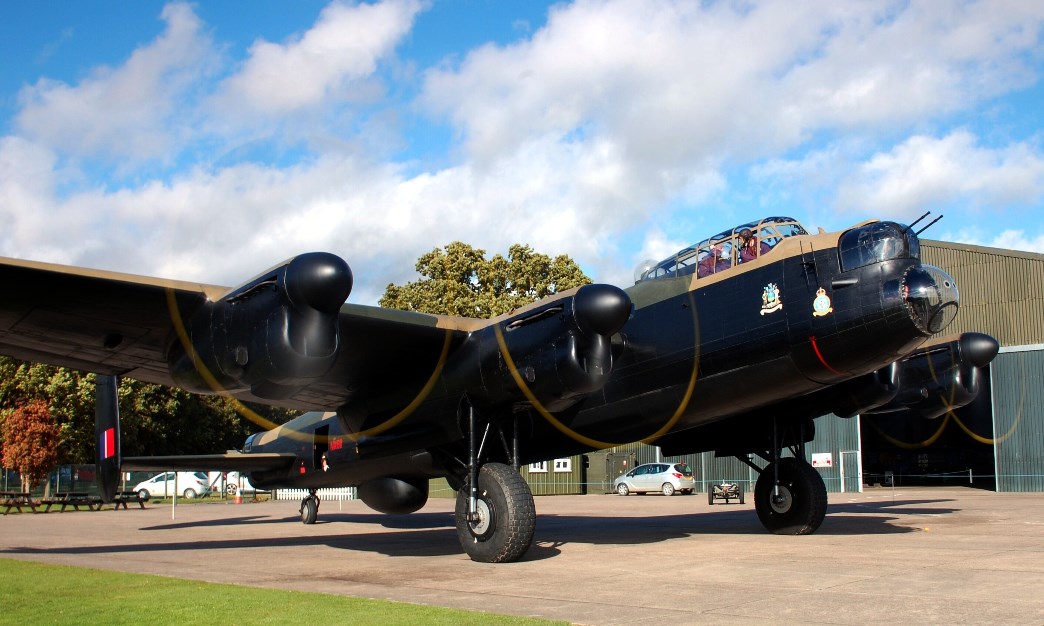 Possibly hit by flak as it circled above the clouds over Normandy, Lancaster PB304 was in trouble as it came in over Manchester on a route back to base at RAF Metheringham in Lincolnshire.

The many witness accounts told of the Lancaster flying low with port engine trouble and attempting to land at the Littleton Road playing fields. The first attempt was aborted and Flight Lieutenant Lines brought the aircraft back round for another attempt. He very nearly made it but a wing clipped the roof tops of houses in Regatta Street and the Lancaster crashed into the far bank of the River Irwell. There was apparently a pause of 30 seconds before the bombs on board exploded.

Below; Two photos of Regatta Street after the crash and the bombs exploded, kindly provided by Bob and Beryl. 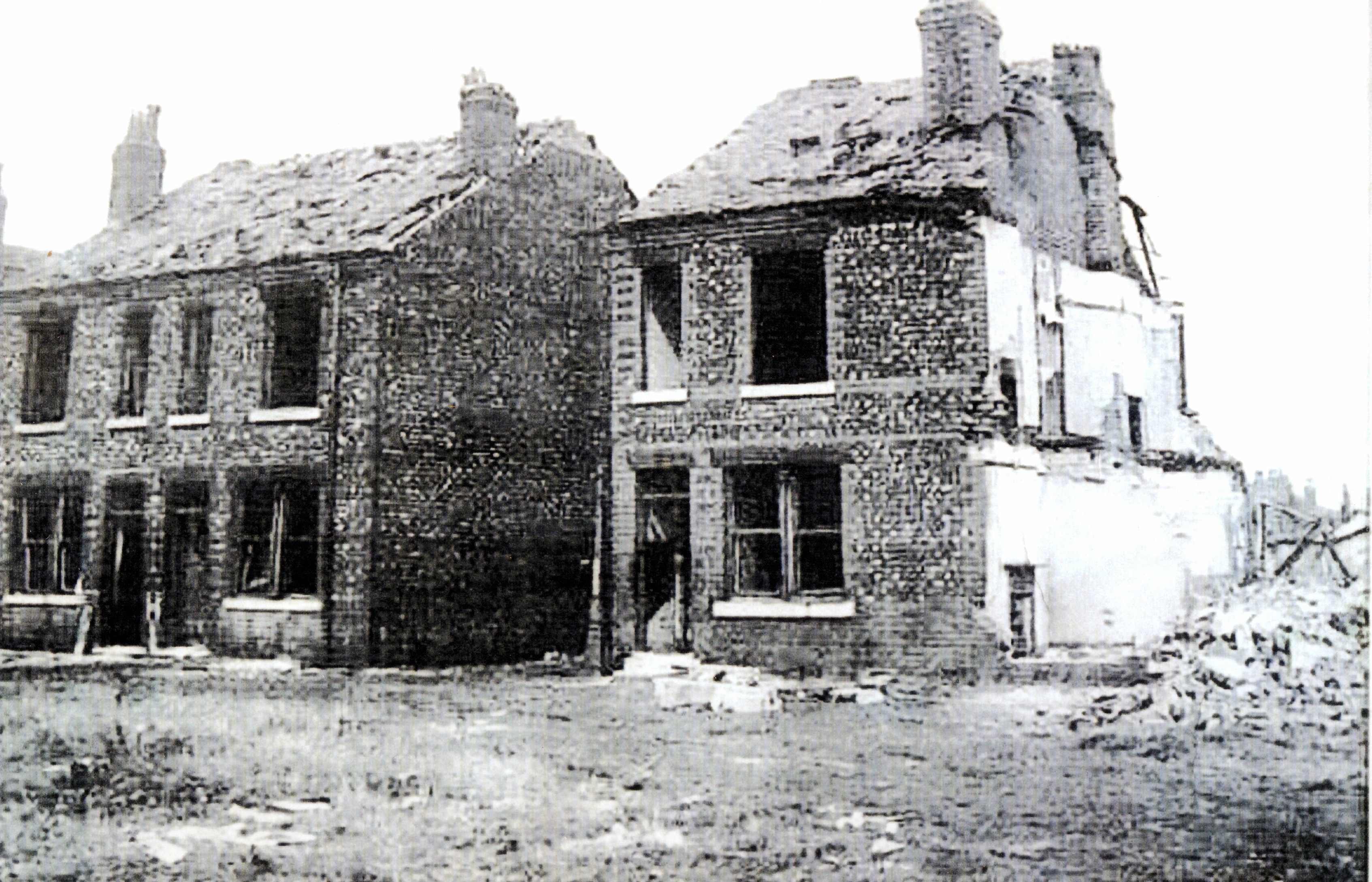 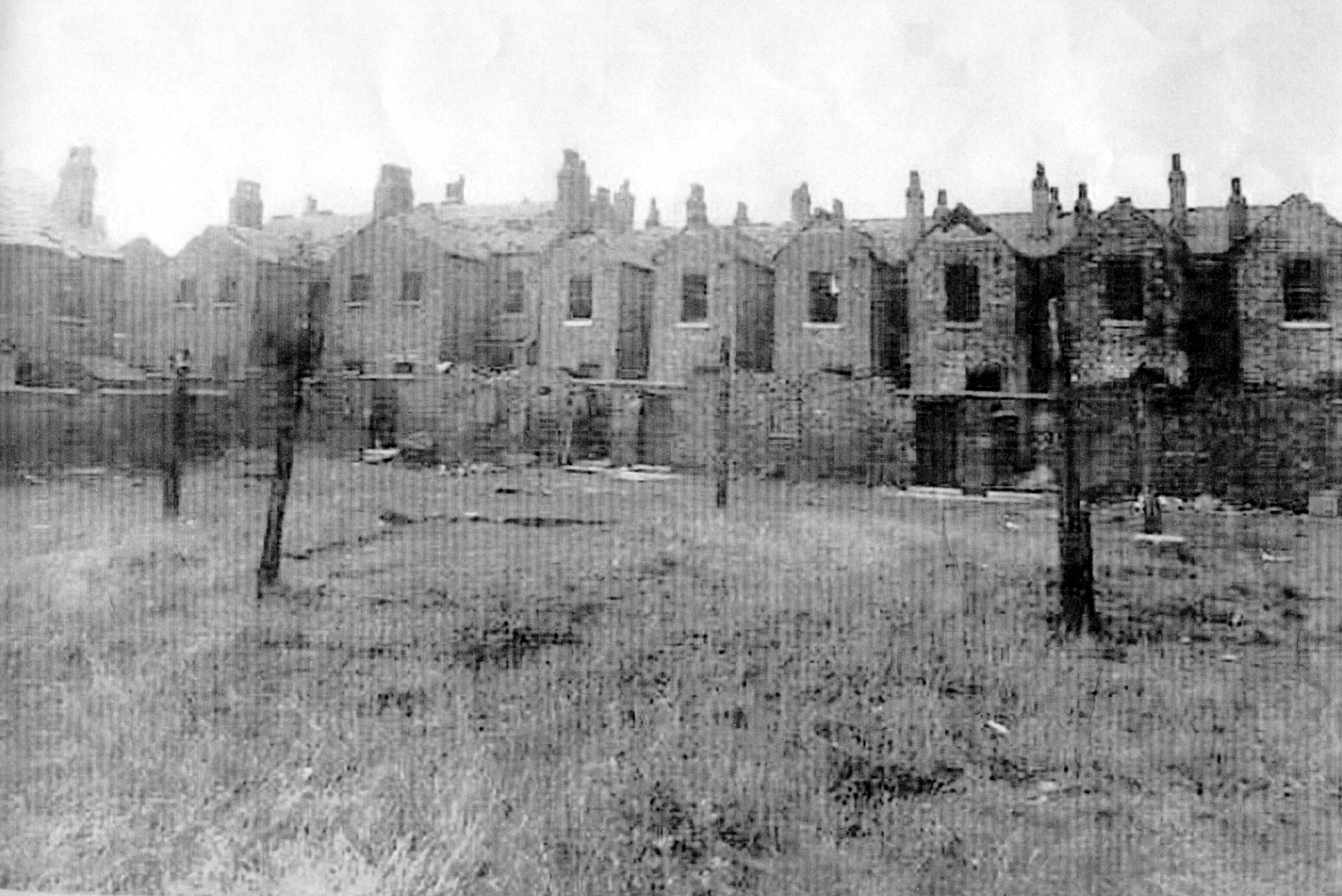 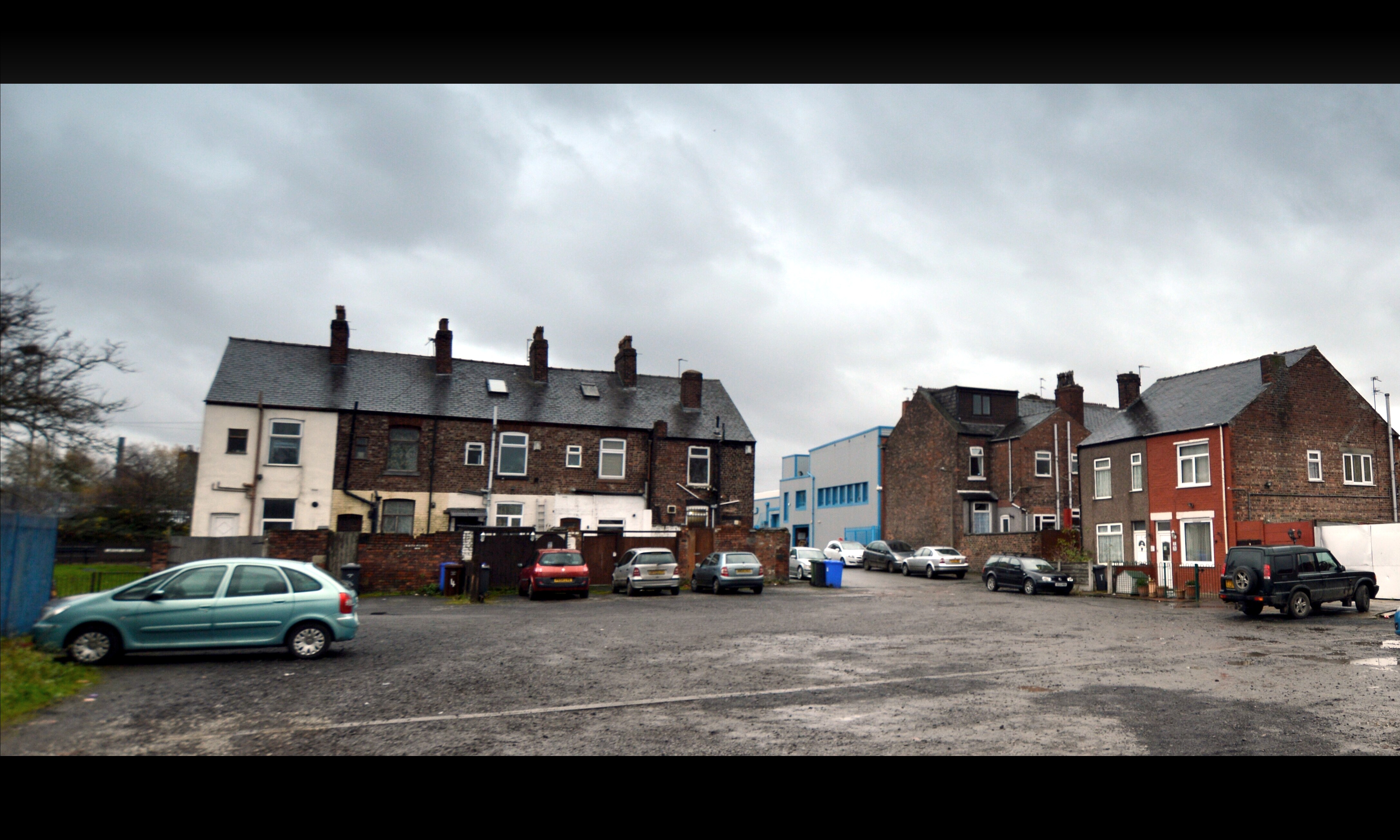 Visiting the scene last week, I spoke with a Regatta Street resident called Beryl. She was just a small child at the time but was able to recall it. She had been playing out but had just returned to her home when the Lancaster crashed followed by the explosion which demolished a couple of houses in the street. She told me one memory of that was a seat being ripped clean off her bike. Beryl also showed me a framed photo of her home after the incident – all the windows smashed, the walls damaged and part of the roof was missing. 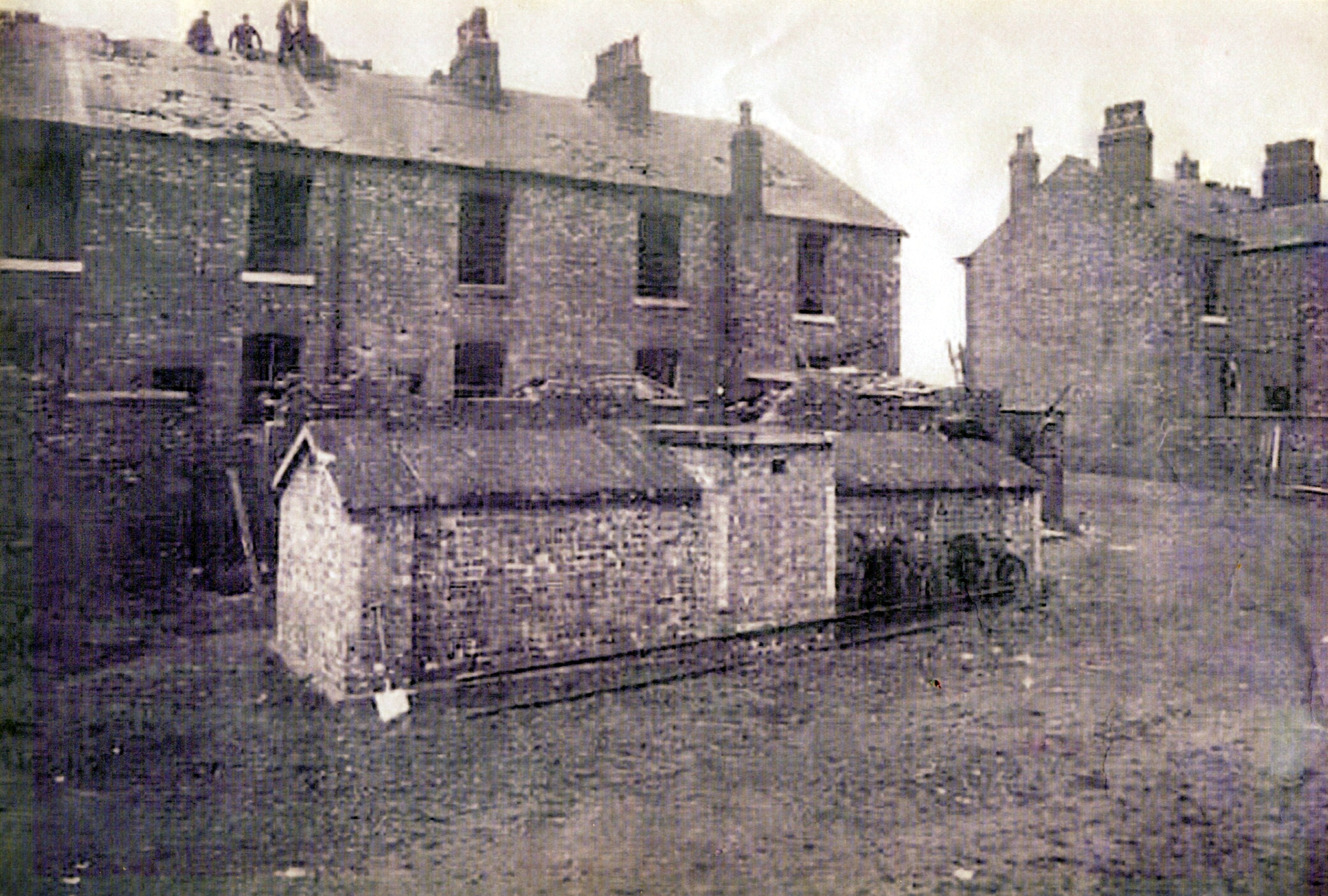 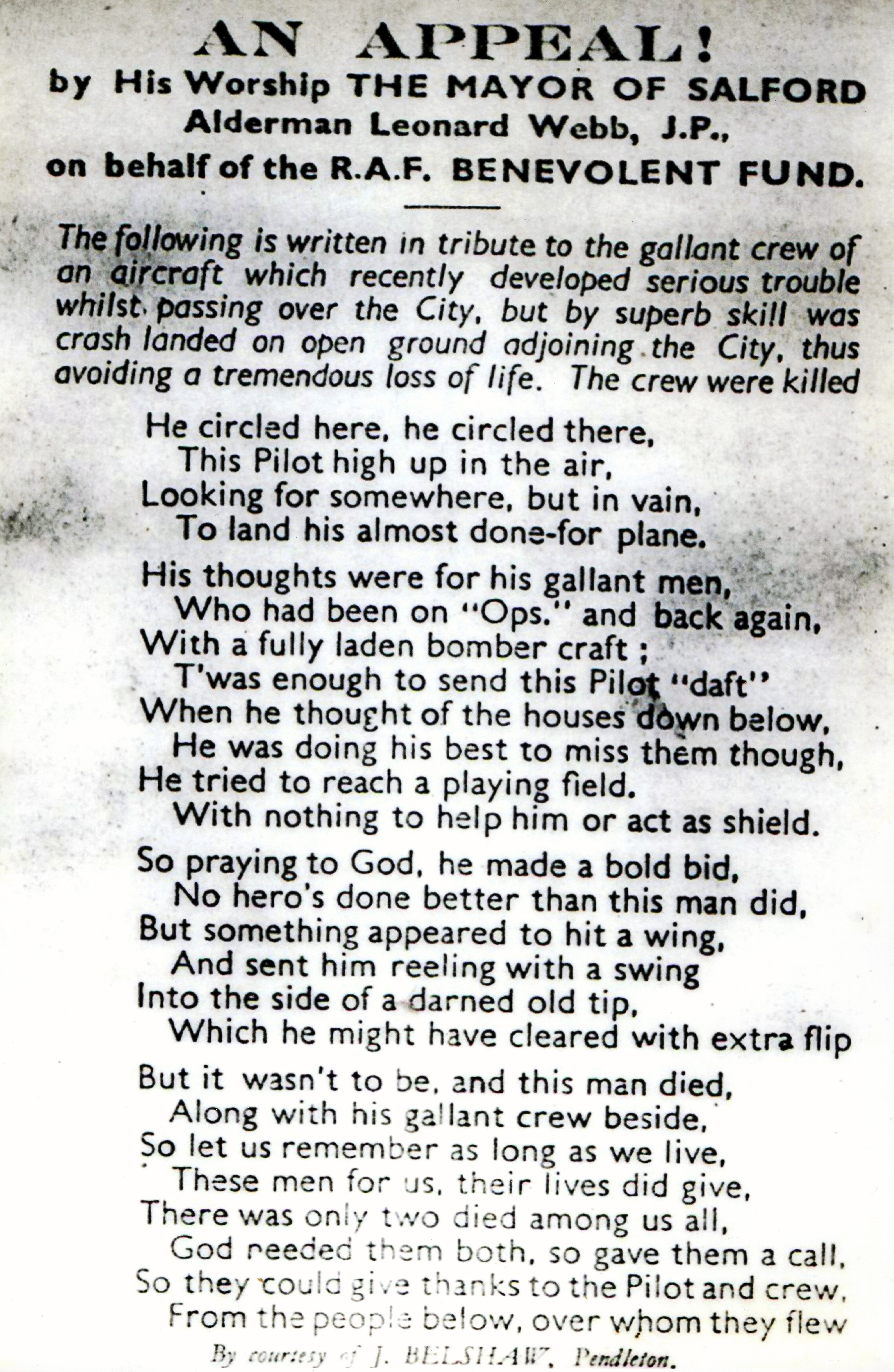 The photo above and the poem by J Belshaw of Pendleton, courtesy of Bob and Beryl.

Two people on the ground (not one as initially reported) died of injuries caused by the blast; a 45 year old ARP warden, Mr George Morris and 72 years old Mrs Lucy Bamford, both of Pendleton.

The Salford City Reporter of August 18 1944 reported on the coroner’s inquiry. Mrs Caroline Morris said her husband had been working in the allotment. Mr Morris had asked his wife to fetch some scissors from the house to cut some roses. As she returned she saw the Lancaster low overhead and thought it was doing stunts. He shouted, “Run for it Carrie!” I ran behind an air raid shelter. There was a loud explosion. I ran home to see whether the children were safe and then ran back to the allotment where I found him lying on the ground. He said his left leg had gone.

Mr Morris seemed to be recovering well in hospital but died a few hours later, the cause of death was a pulmonary embolism brought on by the fracture to his leg.

The other fatality on the ground was Mrs Lucy Bamford who was at home in Langley Road. She too appeared to recover well and was discharged from hospital but died at her son’s home on August 11. The grandson of Mrs Lucy Bamford has written a book on the subject called the Salford Lancaster. Surprisingly neither Salford nor Eccles library had a copy (and neither had I) and so have had to find other sources for the details presented here.

The pilot was Flight Lieutenant Peter Lines from Purley in Surrey and although early into his tour of operations he was considered an exceptionally good pilot.

The Wireless Operator was Sergeant Arthur Young from Cardiff. Of Afro-Caribbean descent he was one of the few black airmen at that time.

Sergeant Mohand Singh was the Lancaster’s rear gunner and was from the Punjab; he was completing his 22nd operation but in civilian life was a medical student.

Sergeant Raymond Barnes (Flight Engineer) was local to the area in which PB304 crashed, his home was less than a mile and a half up the road. It is possible he guided Flight Lieutenant Lines to the playing fields.

Mid upper gunner Sergeant John Bruce Thornley Davenport was from near Market Drayton in Shropshire. Aged 30 he had been an RAF cook who applied for crew duties and completed a gunnery course.

The Bomb Aimer was Flying Officer John Steele, of Bradford. He had reportedly told his family of a premonition he would not survive the month.

Flying Officer Harry Reid was the navigator and was from Toronto. His parents were from the Orkneys and before the war Harry Reid had been studying maths and physics at the University of Toronto.

Below; Two of the crew. F/O Reid on the left, Sgt Young on the right 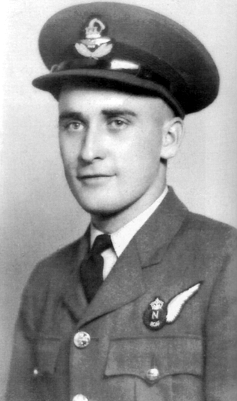 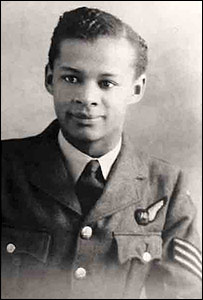 Picture below of Sergeant Mohand Singh courtesy of his nephew Anil Sood and used with kind permission. 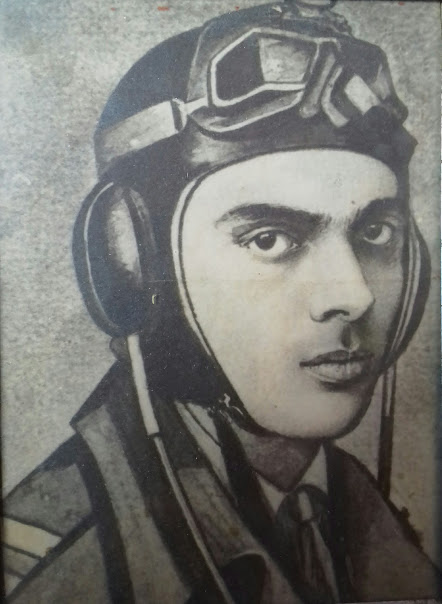 At the nearby Agecroft cemetery there is this memorial. 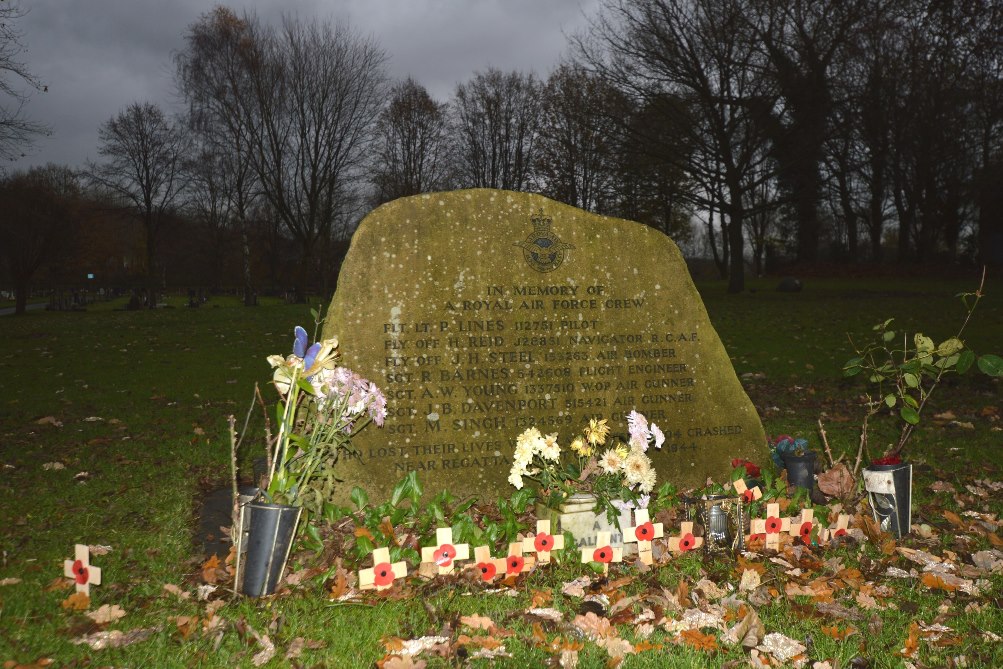 The stone for the monument was donated by a quarry owner from Halifax called Tommy Topham who apparently donated the stone for many war memorials in the UK.

Below; Memorial at RAF Metheringham, photo taken during a brief visit to the airfield. 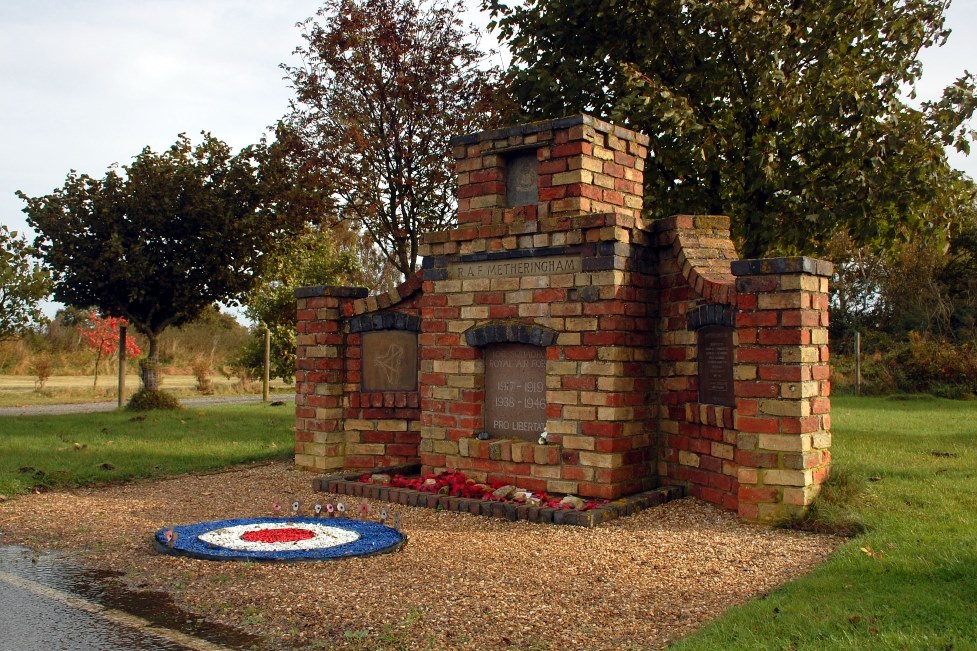 Below; Bombing up a 106 Squadron Lancaster at RAF Metheringham. Photo from wikipedia. 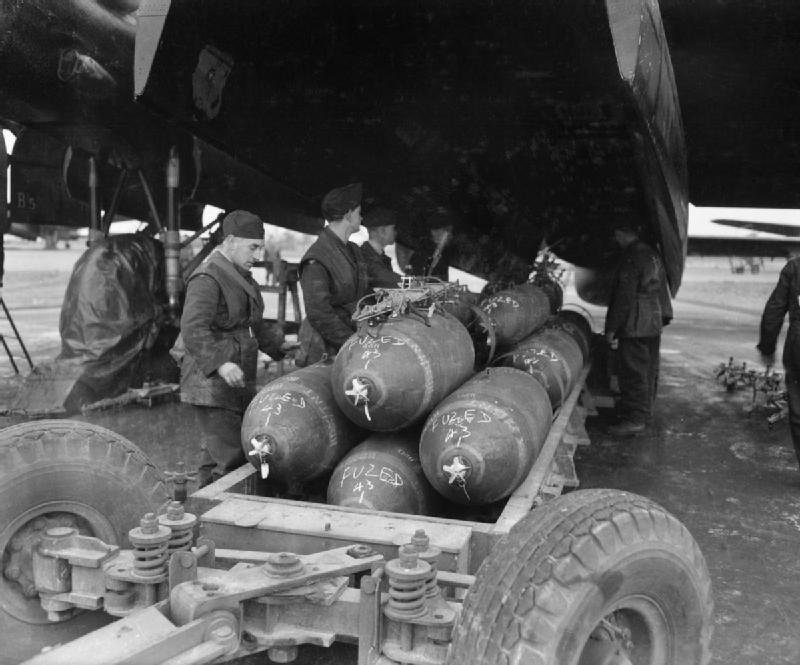