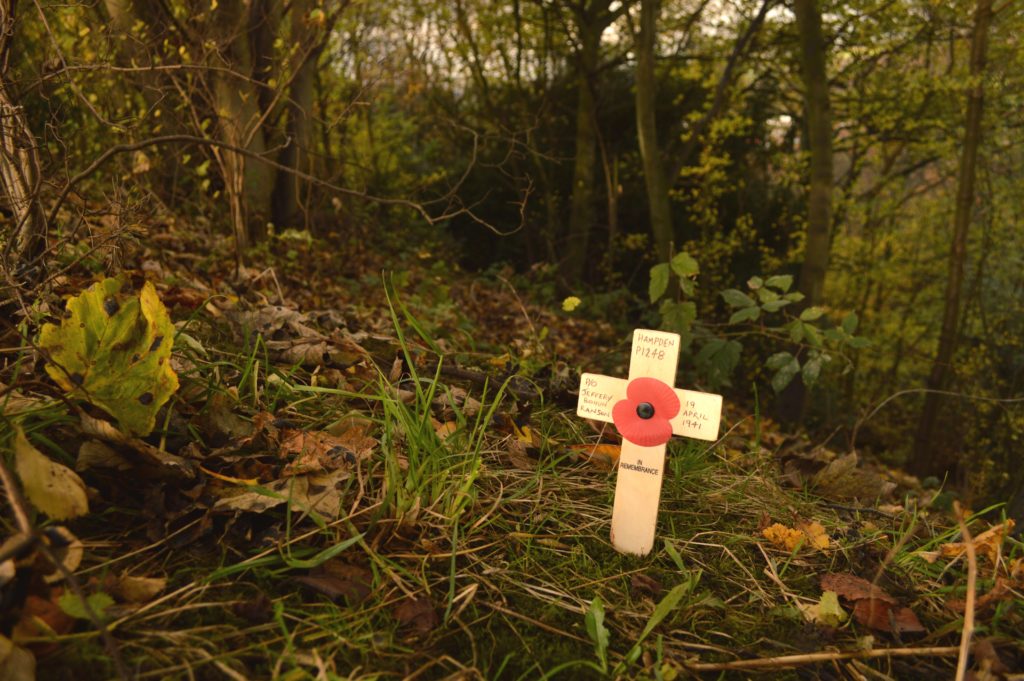 Handley Page Hampden P1248 crashed in these woods after striking the cable of a barrage balloon, April 19 1941. The cable cut into the bomber and apparently tore off part of the port wing (W R Chorley, RAF Bomber Command Losses, Volume 7) killing one of the two crewmen.

Pilot Officer Ralph Athelsie Pole Allsebrook was on a flying on instruments exercise. His navigator keeping a look out for him was Pilot Officer Jeffery Bohsun Ranson. Cunningham (Peakland Air Crashes – The Central Area) notes their flight commander back at RAF Finningly had decided a wireless operator would not be needed for the flight, which was unfortunate because when P/O Allsebrook strayed from the designated area in low cloud, P/O Ranson could not see what was ahead of them and having no wireless op meant the warning signals from the barrage balloons were not picked up.

P/O Allsebrook managed to get out and parachute down, landing at the other side of Concord Park. P/O Ranson, however, did not. It is not known whether he was killed by the cable cutting into the aircraft, or whether he was injured and unable to bail out or whether he tried to but for some reason was unable to get out in time. The witness statement below is interesting because he recalls seeing two parachutes.

The inquiry took into account the poor visibility and that the crew had strayed from their planned area and were effectively lost. The flight commander was criticised and the court ruled that subsequent flights must have on board a wireless operator.

P/O Allsebrook was later promoted to Flight Lieutenant and joined 617 Squadron (the Dambusters) at RAF Conningsby and awarded the DSO and DFO. He was killed during a 617 Sqn low level raid on the Dortmund Ems canal at Ladbergen near Osnabrück, September 1943. 5 of the 8 Lancasters were lost on that unsuccessful raid and 617 Sqn never again attempted the low level raids they were famous for.

The crash site above is on the edge of the golf course where Concord Park is bordered by Woolley Woods, just north of Meadowhall Shopping Centre. I made a few sweeps of that part of the steep bank with a metal detector and got a few signals but as there is a footpath close by and a few tin cans have been chucked into the undergrowth, the signals were as likely from litter as from aircraft alloy.

Below; famous photo from LIFE magazine showing a barrage balloon tethered in a London park. 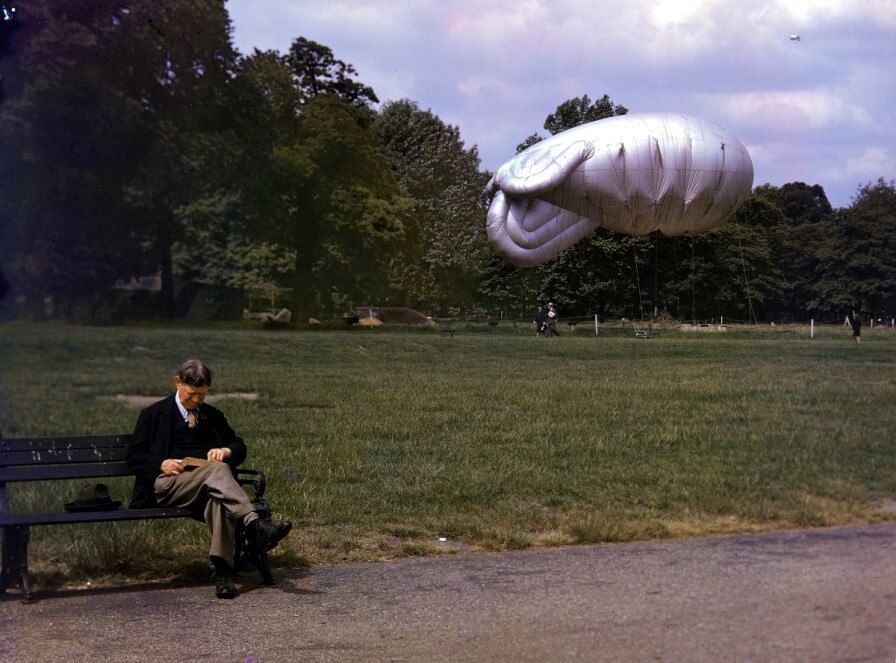 Although he later served and died as a pilot with 617 Squadron, he joined them after the Dambusters raid and did not take part in that operation as some sources suggest.

As is ever the case with an aircraft which crashes in a town or city and where there are no casualties on the ground, a story will inevitably emerge whereby the pilot heroically tried to avoid hitting houses or an orphanage or whatever.

Witness testimonies are usually very interesting but not always accurate. This account from a lad who was 10 years old at the time and watching events from the barrage balloon station at Shiregreen Cemetery close by, provides fascinating detail – but the author is wrong when he says both men survived. Maybe that is what he, as a young boy watching the drama unfold, was told at the time? It is also interesting to read of the kids playing football in the park because that detail is repeated in the story of the USAAF B17 which crashed at Endlcliffe Park in the city. (See here for more on that story). But he notes that the barrage balloon cable with which the Hampden collided was tethered at Woolley Woods, which is where the aircraft came down. The pilot must have acted very quickly to be able to bail out!

“Another incident was one afternoon as I sat on the steps of the guard room. A telephone call requested the staff to pull in the balloon as quickly as possible because a British bomber was approaching beneath the height of the balloon. There was a rush to do this and I could hear the drone of the engines of what turned out to be a Hampden bomber. It broke through the cloud cover and, as I watched, the plane hit the cable of another balloon which was sited in Woolley Woods. I watched aghast as it slowly turned over and began a steep descent into a football pitch in Concord Park where lads were playing. I watched as two parachutes came to the ground and understand one was found hanging in the branches of a tree. Both airmen from the plane survived.”
BBC People’s War