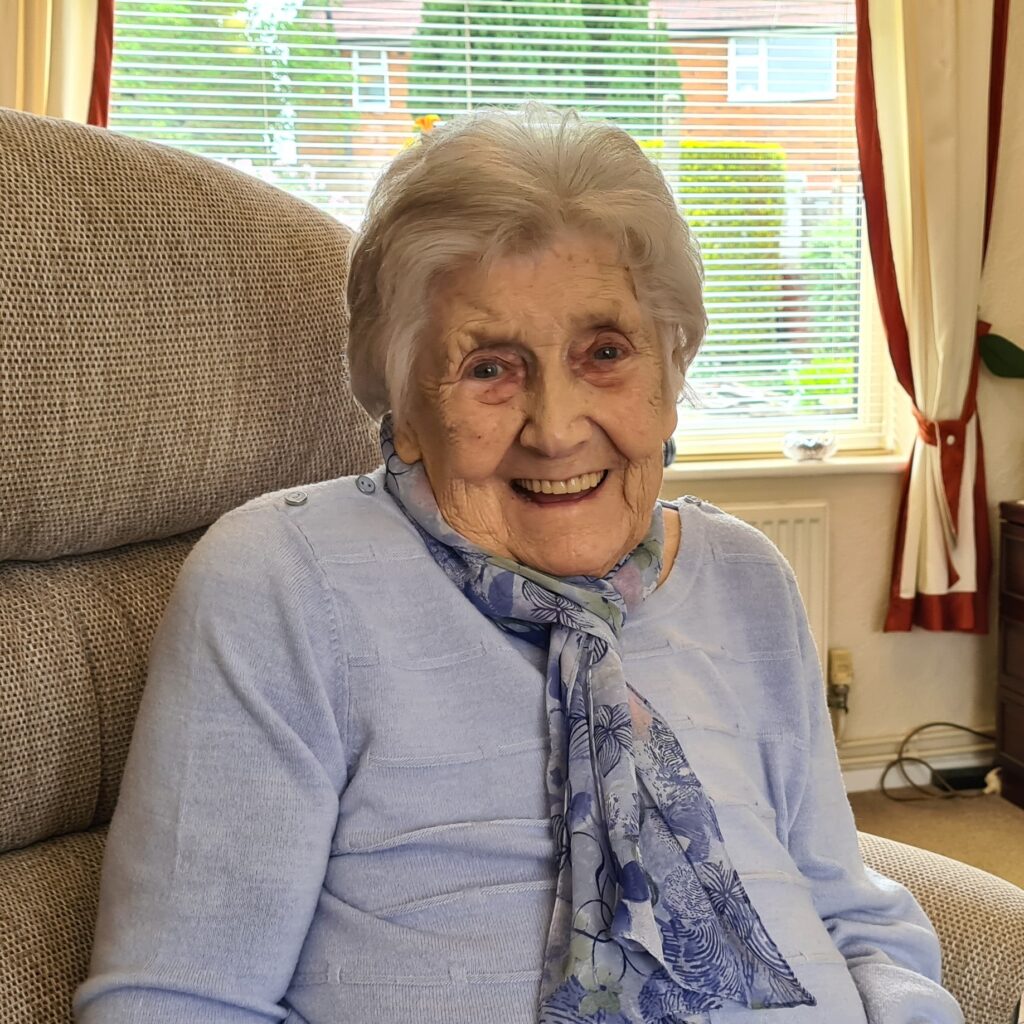 I met with Gertrude (Trudy) at her home in Oldham on 07 May 2022 after being introduced by her neighbour Pat who had seen and contributed to the page about the Prisoner of War camp at Glen Mill, Oldham (link to that page at the bottom of this one).

Pat told me of her neighbour Trudy who was born in Austria in 1932 and, as a young girl, it seems she met Hitler. I was keen to speak with Trudy about her memories of the war and of her life in Oldham after the war.

The reason for the meeting came about following a discussion with Pat about the former Glen Mill PoW Otto Adler, who is well remembered in Oldham.

Otto had been friends of another of Pat’s neighbours, Elsie (Otto worked on a farm at Alt Lane, Oldham with Elsie’s husband), and for years following the end of the war Otto and his family would meet with Elsie and her family. Trudy would often chat with Otto in German when he visited. Otto used to say that his time at Glen Mill was a happy time, especially at Christmas and he loved the people of Oldham, Trudy said. Otto had a farm at the village of Schmalegg near Ravensburg in Germany. Trudy told Pat and I of how beautiful it was, with its apple orchard. There is a photo below of Otto in later years, taken during a visit to his home in Germany.

Trudy was born in Graz, Austria in 1932 and came to Britain in 1951. She had seen an advert in a newspaper after the war for girls to work in cotton mills in England.

“I had been a machinist all my life,” Trudy said, “And it looked so exciting. I said to my friend Ingrid – who was as silly as me – what an opportunity it would be!” We put down our names but I did not tell my mother… She was so upset when she found out. We applied in February, I told my mother in July and the month after we were in England.”

Trudy said that on the train journey across she and Ingrid met another young woman, Maria from Linz, and the three became close friends.

In the photo below, Maria is on the left, Trudy is on the right. Photo courtesy of Trudy Costello. 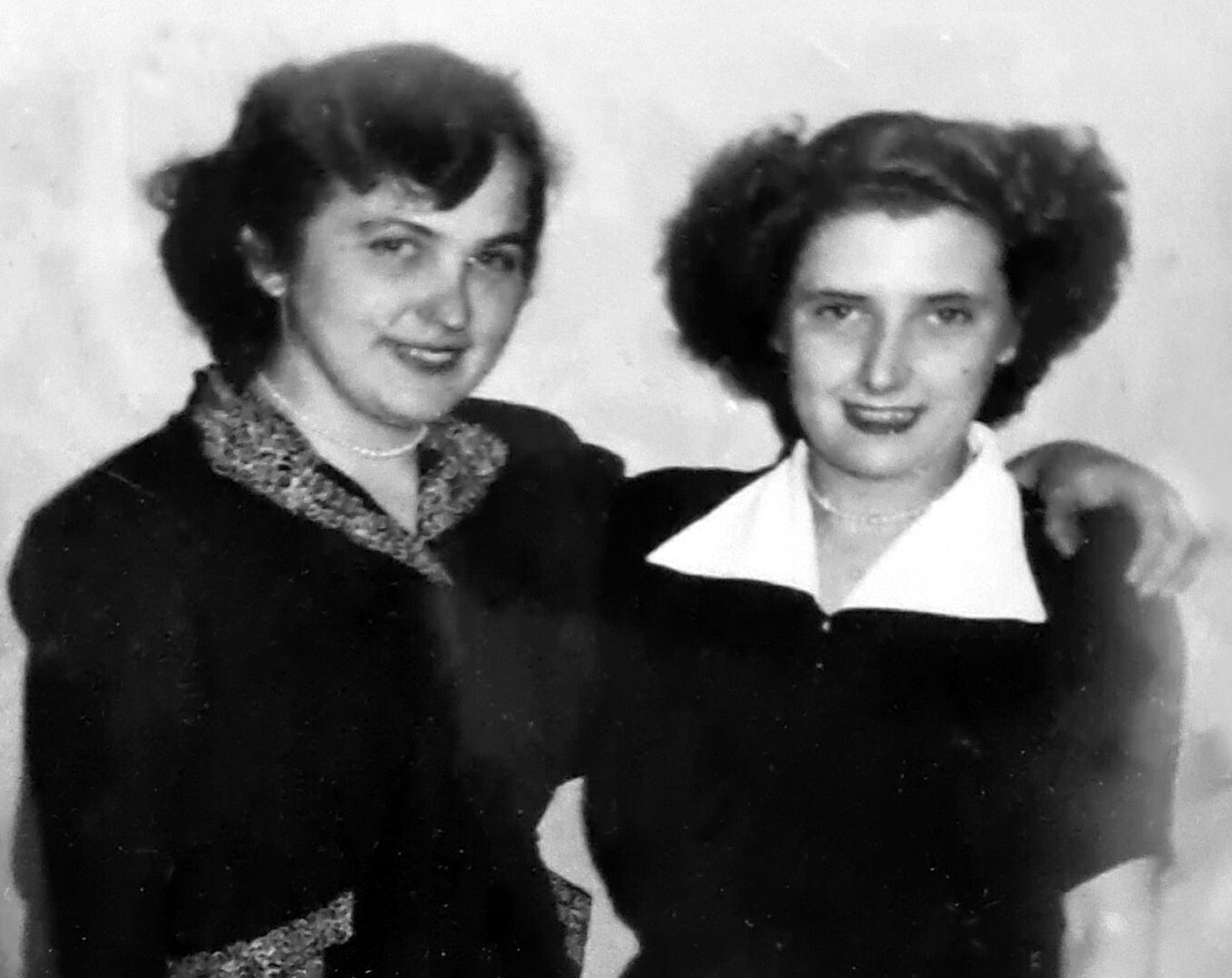 Trudy told us about Maria. She said that she was from a family of 10 children. Because she had raised so many children, Maria’s mother was awarded a Nazi medallion. I imagine this was The Cross of Honour of the German Mother.

In the photo below, Trudy is on the left, Maria is on the right. Photo taken 1954 at Alexandra Park, Oldham. Courtesy of Trudy Costello and used with kind permission. 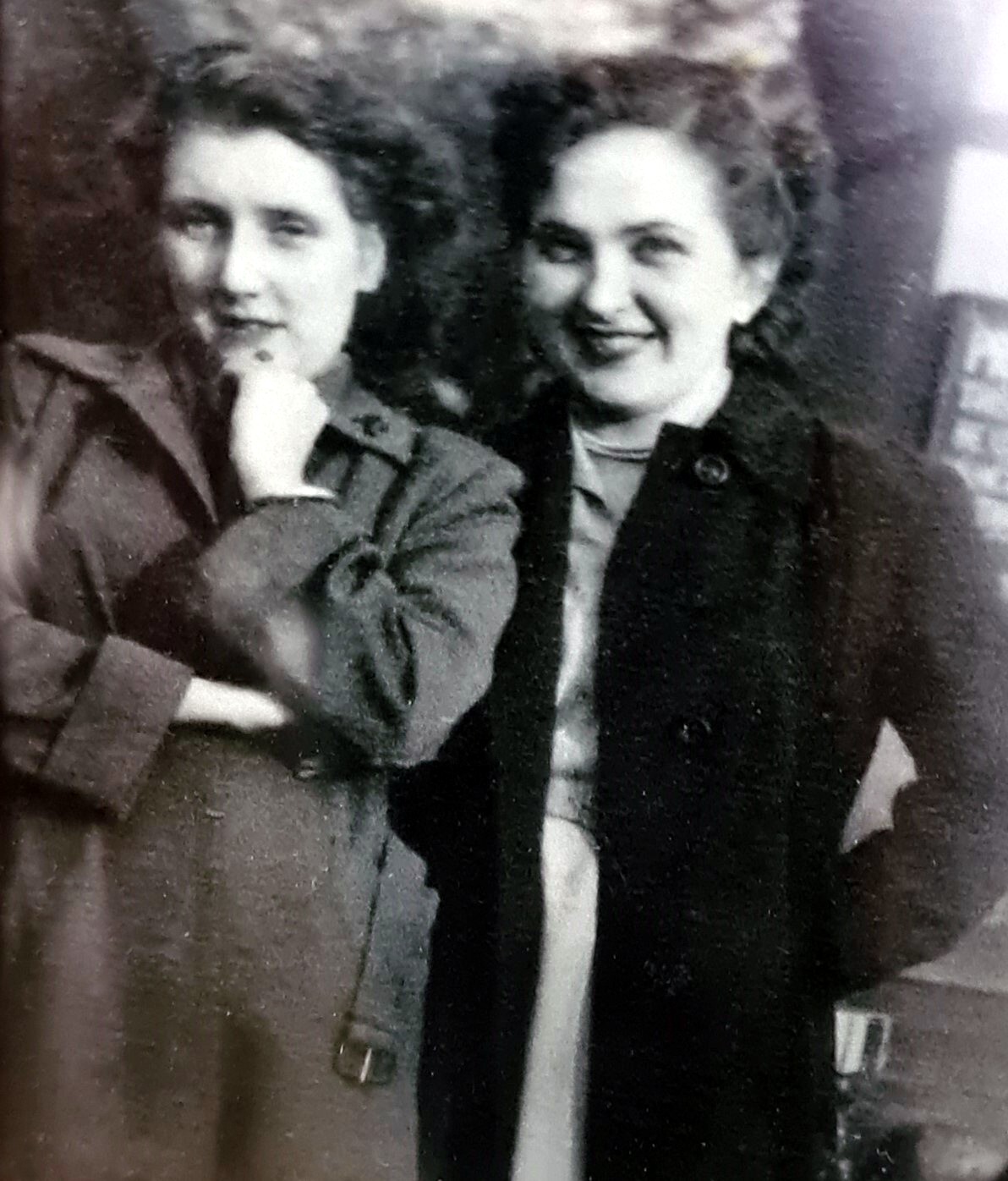 Speaking of medals and badges, Trudy brought out a Wehrmacht Edelweiss cap badge which her uncle had given her. 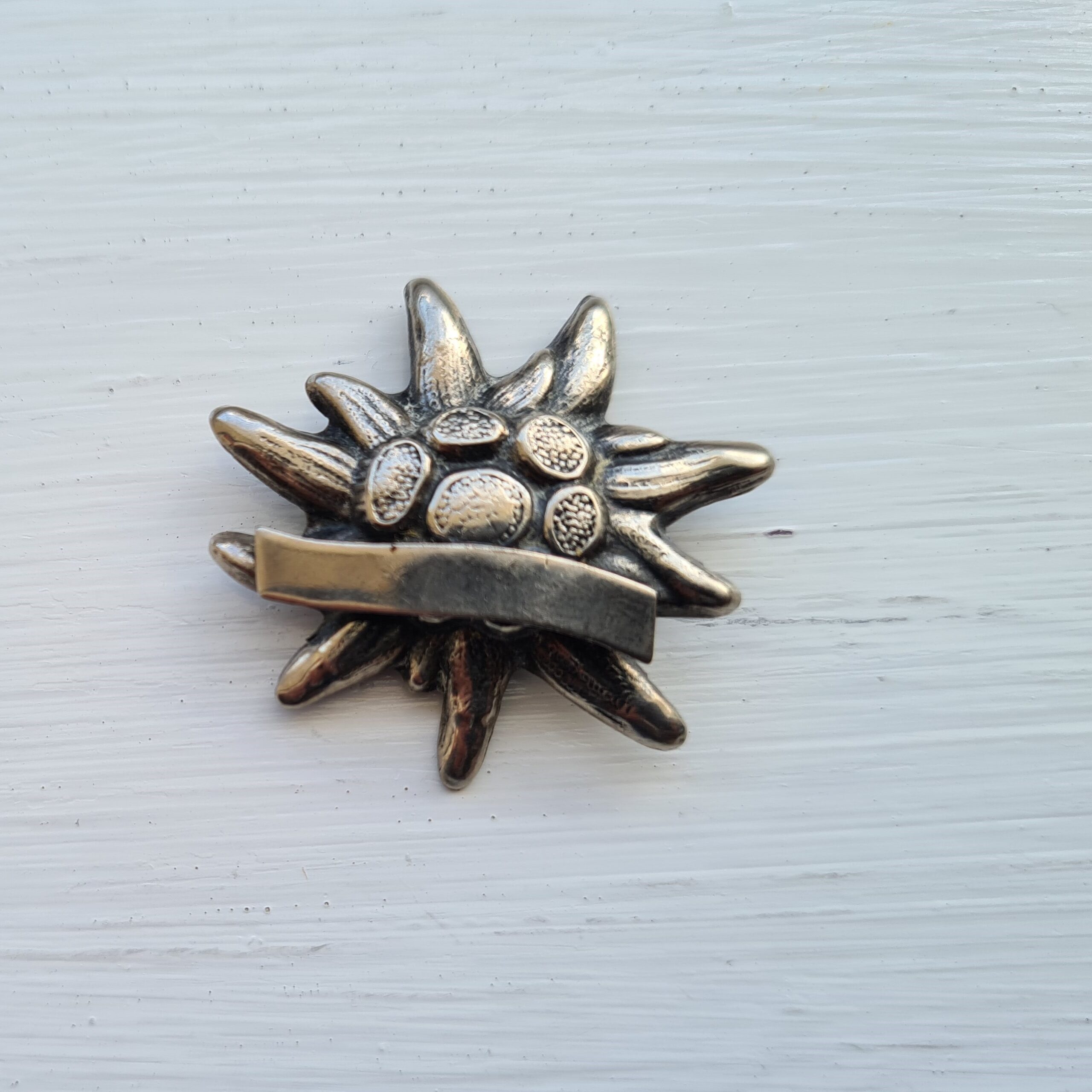 I asked Trudy about the time Hitler came to visit her kindergarten. She said she has very little memory of it, being only five or six at the time. I imagine this was after the Anschluss in the Spring of 1938. I wondered whether Hitler visited the nursery or whether the children were taken to see Hitler when he visited Graz? Either way, Trudy recalls being told by her mother that she was in a photo in the local newspaper, Kleine Zeitung with the caption, “Hitler says hello to the children”.

At one point we talked a little of life in Graz after the Red Army took control in 1945. The treatment of women in Graz by the Red Army was as monstrous as it was anywhere as they advanced West*. Trudy told us how she would try to disguise herself as an old lady by putting on glasses and a shawl and stooping as she walked. Not that would matter too much to the Soviet soldiers. She told us how mothers would make their children sleep under – not in – their beds to hide them from the Soviets.

Trudy also recalled how the Soviets took all the food. She and her mother looked out of the window at her home on Hofergasse (now called Lazarettgürtel) and watched with hunger and envy as the Soviets, who had stolen and killed a pig, were roasting it in the street. Trudy also told me of how one soldier had holes in his socks which needed mending. Trudy offered to mend them in return for some bread (Trudy said they used to say “khleb, khleb”). True to his word, he got his socks mended and Trudy and her mum got lots of bread.

I asked Trudy about her memories of the war. She recalled her home being bombed by the USAAF. The air raid siren sent people rushing to the shelters but Trudy’s mother was poorly so she remained with her. One bomb fell at the back of the house. When the all-clear sounded, the people emerging from the shelters and seeing the bomb damage, thought Trudy and her mother were surely killed, but luckily they were in the front of the house which was not damaged by the bomb.

Photo below shows Trudy’s former home in Graz where she and her mother were fortunate to survive the building being damaged by a bomb. Photo courtesy of Trudy Costello. 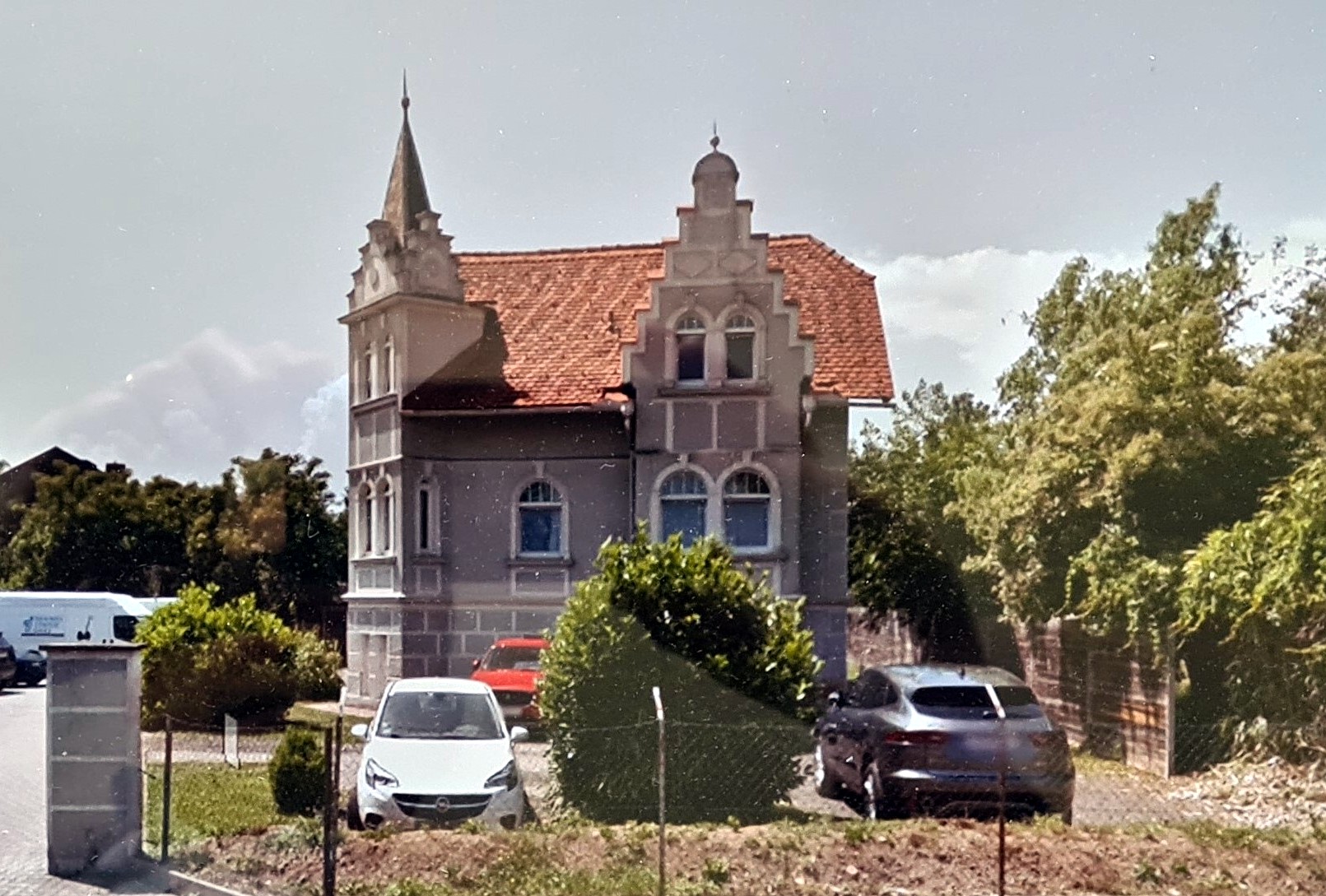 Trudy said her mum was a cleaner for a Jewish professor. “He used to give me Groschen (pennies) to buy sweets,” she said. One day her mother went to work, “and there were two SS at the door. They said to my mother, “Who are you?” My mother told them she was there to clean his apartment. They told her not any more. She was crying with the landlady. We knew where he went but we were always careful not to talk loudly about the concentration camps. I overheard my mum talking to Auntie Annie about the Arbeitslager, and I talked with Ingrid about this place, but we had to be careful…. Our school was burned by the Nazis. I never found out why. Someone said it was because some of the teachers were Jews?”

(It is possible Trudy had heard her mother referring to the Liebenau forced labour camp which was just a couple of kilometres from her home).

After the Soviets had left Austria, Graz came under British occupation and life improved for the inhabitants. “I was 17 and went to the employment office in Graz and got a job working at the NAAFI for the British. There were lots of mugs, no saucers. I served the soldiers their tea, and would ask, “Zucker? Ein? Zwei?” The supervisor, a woman, said to me, “What are you asking them for? They are idiots, don’t ask them how much sugar they want, just give them their tea!” We used to go dancing with the British soldiers. They looked after us.”

Regarding her life in England, Trudy told us how she and her friend Ingrid travelled on an Army train, where they met and formed a friendship with Maria. Trudy said it was all Austrian girls on the train to England.

(It should be noted that after the war, the Allies generally viewed the Austrians as victims of German Nazism and they were tolerated more than Germans. Trudy told us how some women “hated” them when they arrived in Oldham, but a foreman at the mill pulled up the local women, admonishing them and pointing out Trudy and her pals were Austrian, not German. “They were alright with us in time,” Trudy said)

“On the train all I knew was I was going to somewhere called Royton Ring Mill.” Trudy didn’t know what those words meant, she thought maybe it was the name of a town or city? She asked British people on the train, but they had never heard of it, she said.

Royton Ring Mill was formerly on Industrial Street, in Royton. The mill was demolished in 1992, new houses built on the site and the road is now called Saint Phillip’s Drive. 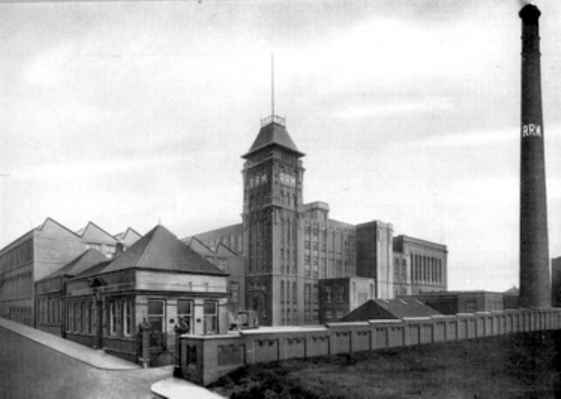 Trudy said a lot of the Austrian girls were housed at a camp opposite Glen Mill but she was living in a property with a Polish family on Acre Lane in Derker. She did later work at Glen Mill when Vitafoam were based there, as did Pat’s mother.

Trudy told us also of how she used to read German graffiti on the walls at Glen Mill. She referred specifically to the toilet cubicles – which had no doors as can be seen in the sketch by PoW Friedrich Frauböse. She said one bit of writing was by a prisoner who wrote how sad he was to be away from home and how much he missed his mother. Another bit of graffiti below that was an epitaph of sorts to a prisoner who killed himself in that toilet block. Trudy was not sure if it referred to the same prisoner who had written of his sadness at being away from home. When Trudy told her non-German speaking workmates about this having translated it, they were naturally upset and the foreman had the walls whitewashed over, covering up the prisoners’ writing.

Below: Friedrich Frauböse’s wartime sketch of the toilet – with no doors on the cubicles – at Glen Mill. It looked much the same when Trudy worked there for Vitafoam in the 1950s. 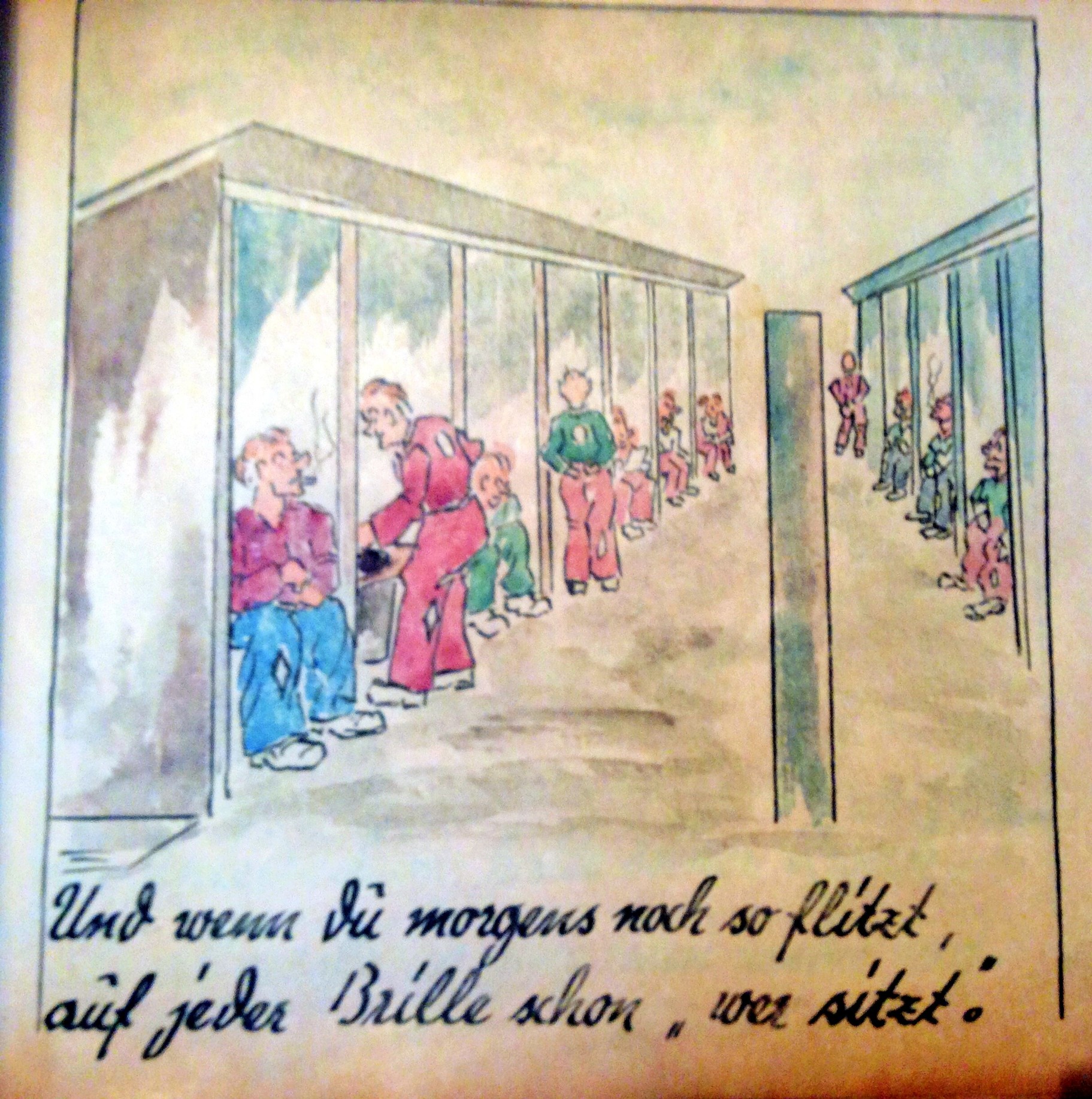 Within a couple of years, Trudy married Chris Costello. They met at the Salisbury Hotel. Trudy couldn’t speak English, Chris couldn’t speak German but they got by and were very happily married for 50 years! 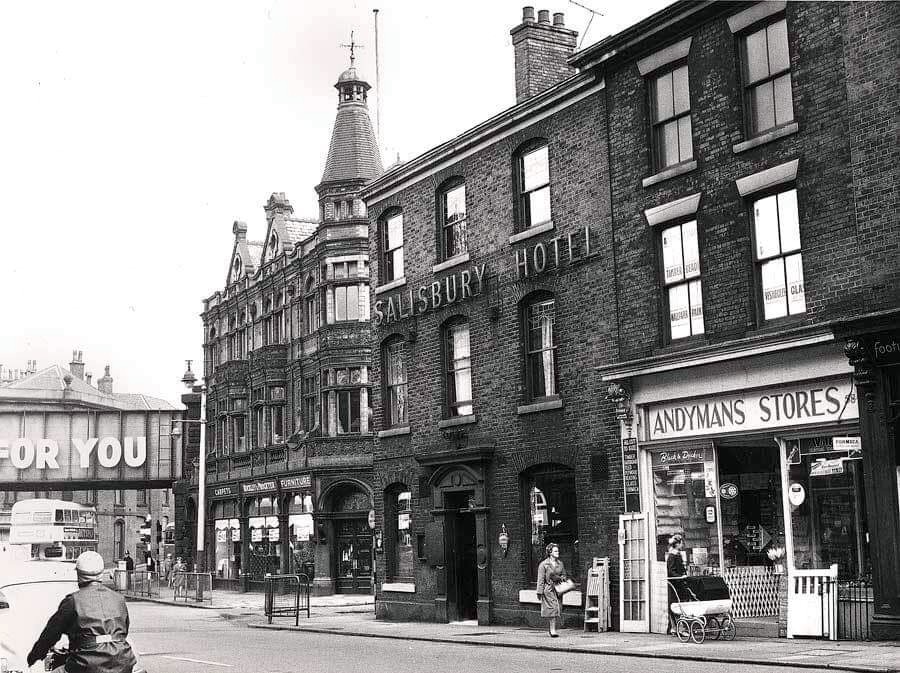 Most of the people in this memoir have since died. Elsie still lives close by, but Chris died in 2001. Ingrid died in 2017, while Maria died in the UK when she was in her 50s. And Otto Adler also died in 2014.

Below, a more recent photo taken during a visit to Graz showing Trudy on the left, Ingrid on the right and their friend Brenda in the middle. The clock tower (‘Uhrturm’), dates back to the 13th Century. Trudy says it can be seen wherever you are in Graz. Photo courtesy of Trudy Costello. 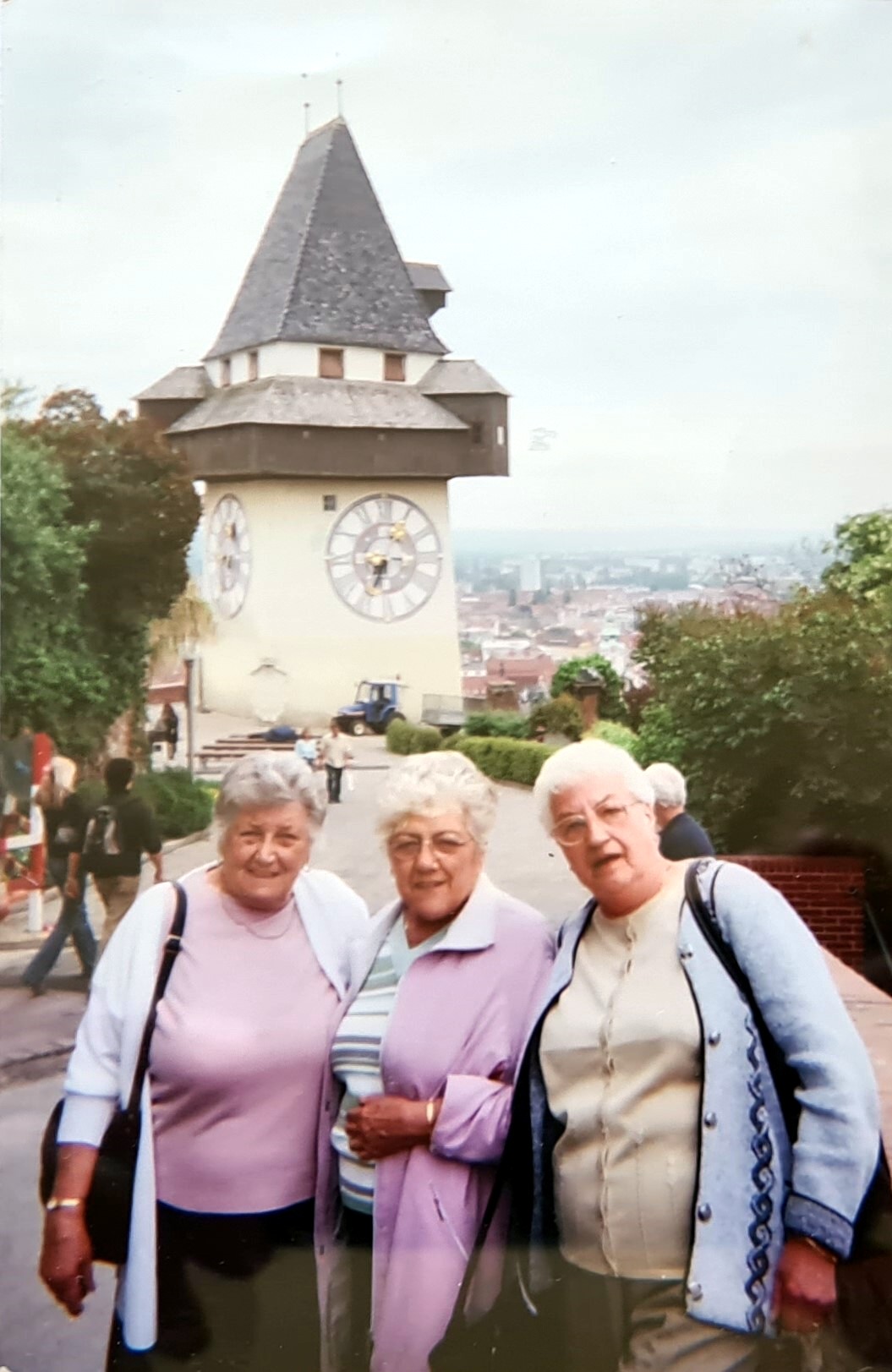 Photo of former PoW Otto Adler at his home in Germany. Photo courtesy of Patricia Clarke. 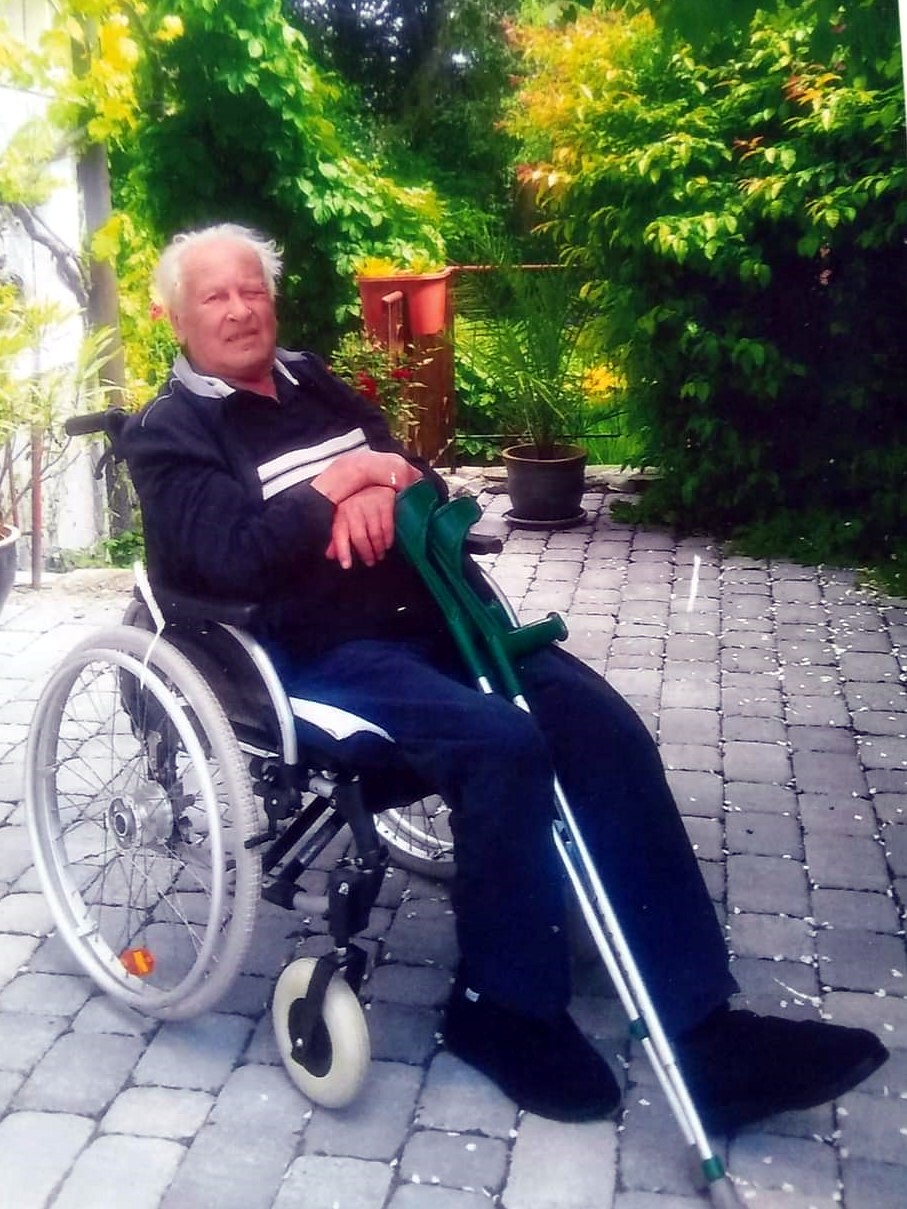 * See for example, ‘After the Reich – From the Liberation of Vienna to the Berlin Airlift’, Giles MacDonogh, 2007

Link to the page about Glen Mill PoW camp, Oldham