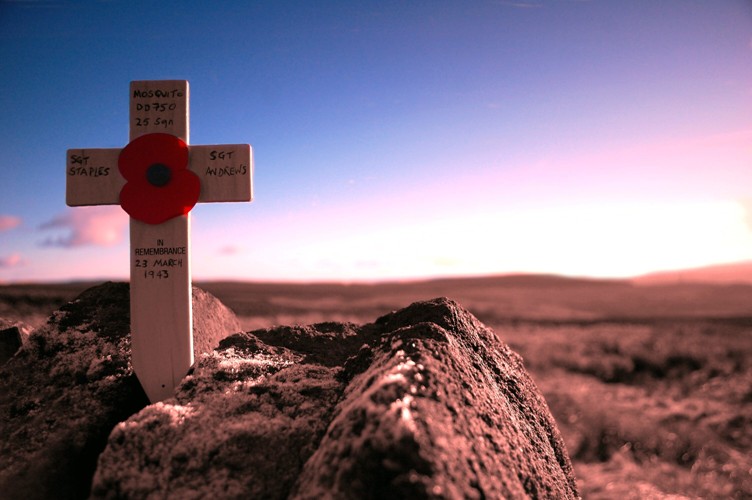 Mosquito DD750 of 25 Squadron was one of three returning home, at night and in low cloud, after a Ranger operation (very fast, very low hit and run strikes deep in occupied Europe) was called off due to bad weather on 23rd March 1943.

It was not pilot error which caused the crash. The ground crew gave Navigator and Wireless Op Sgt Ralph Andrews the wrong height and co-ordinates, upon which Pilot Sgt John Staples would hold, while waiting their turn to land at RAF Church Fenton, south west of York.

In the photo above, DD750 struck the slightly higher ground at Windgate Nick (just behind me), tumbled overhead and crashed on the moor off to the right. We were unable to locate the precise spot where Mosquito DD750 came to rest, so positioned a poppy cross on the wall and photographed that instead.

Both men were killed. Sgt Staples was aged 28 and from Anglesey, Wales, and Sgt Andrews was aged 20 and from Stoke. Both men served with the RAFVR.

Mosquito DD750 in its matt black night fighter paint scheme. Probably taken on the test flight prior to delivery.

Photo found on this page;
www.strijdbewijs.nl/top/o/mosquito.htm