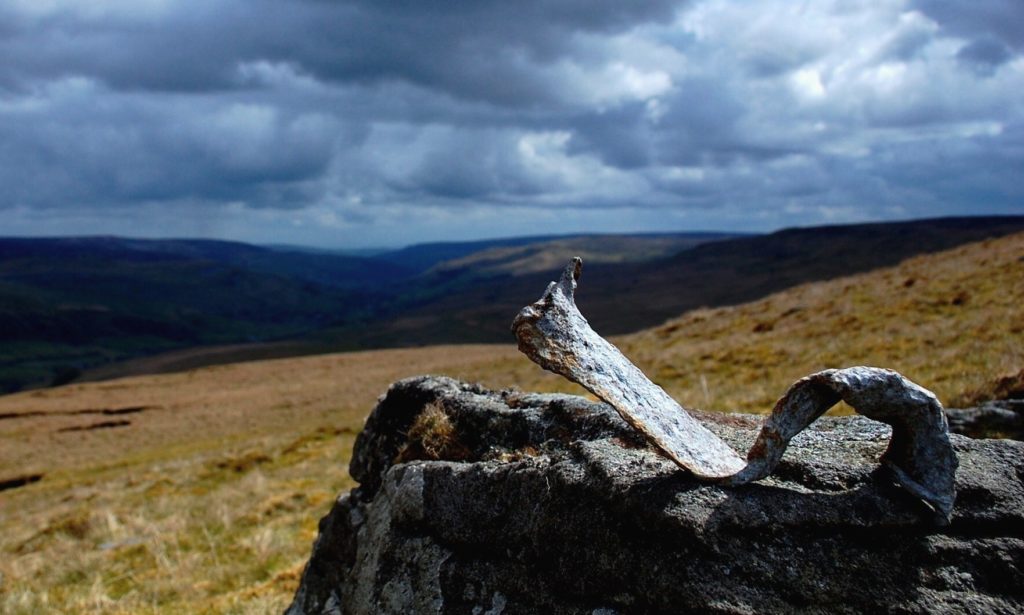 Fragment of debris from the largely Canadian crewed Halifax bomber W1146 of 1659 Heavy Conversion Unit which crashed on Great Shunner Fell in the Yorkshire Dales on January 28 1943.

The bomber was on a cross country navigation exercise out of RAF Leeming when it crashed in low cloud while descending on the return to base. 3 of the 7 men on board were killed in the crash. One of the men, Flight Sergeant Askew, survived but succumbed to his injuries and died the day after.

The pilot P/O LeFebvre and air gunner Sgt Pudney, themselves badly injured, returned to the burning wreck to get their mates out. Sgt Pudney then walked across the moors, in spite of his injuries, to get help. He was awarded the George Medal for his bravery.

The George Medal is normally awarded to civilians for acts of great bravery (such as the Wolverhampton nursery teacher Lisa Potts who in 1996 suffered extreme injuries protecting kids against a machete wielding attacker) but also to military personnel in non-combat situations.

In a twist of fate, Sgt Pudney of Buffalo, New York, was in another Halifax* bomber of 405 Sqn which crashed less than 6 months later at Clenchwarton near King’s Lynn, Norfolk. Again Sgt Pudney pulled his pals from the wreckage of the bomber and again walked to find help. Tragically he had less luck than he had spirit, and he and all his fellow crew members died from their injuries. He was 21 years old.