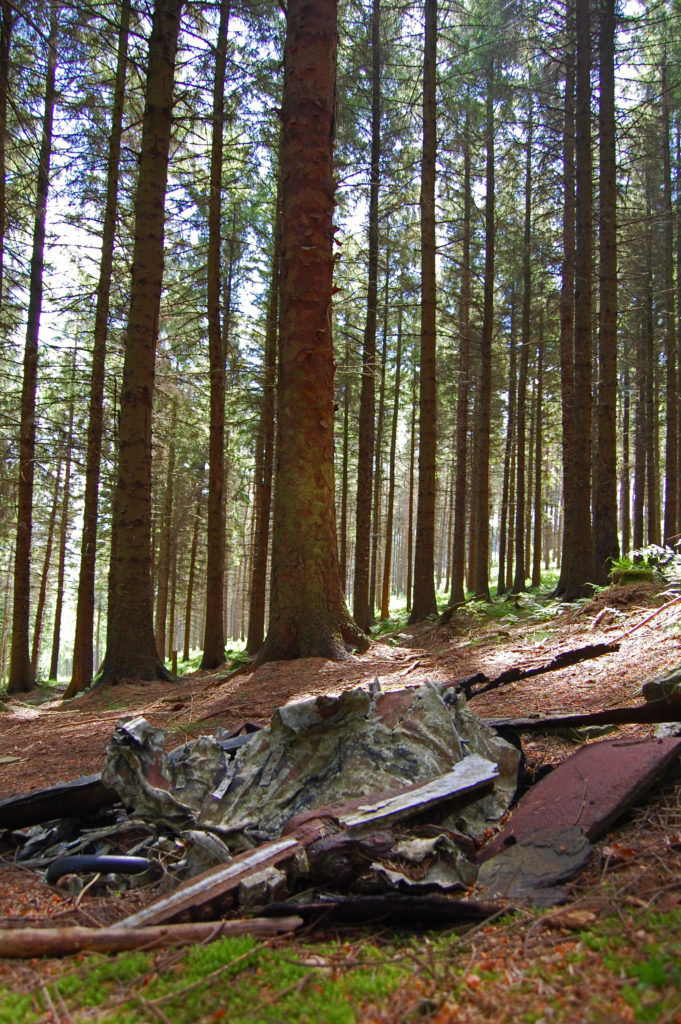 Edit 04 February 2014; please see comment below by the pilot of this aircraft.

Sergeant Joseph Harrington, pilot of Meteor RA487, had got into difficulties, baled out, deployed his parachute and landed safely in a ploughed field near Castleton, 8th December 1950. This site is only a mile to the South East of where Boulton-Paul Defiant N1766 crashed after its crew had baled out too, in similar circumstances, nearly 10 years earlier.

While on a night navigation exercise, Sgt Harrington found himself above low cloud while aware of the hills somewhere beneath him. The Meteor’s radio had packed in, leaving him unable to get a fix by any means other than a visual. In fact, according to Cunningham, Sgt Harrington did see a road and considered a forced landing, as his fuel was almost depleted, but a looming chimney forced him back up and into the cloud.

Cunningham says Sgt Harrington did “what so many others lost in the region had signally failed to do: deciding that enough was enough…” he took his Meteor up to 5,000 feet and “…made the balanced decision to leave the aircraft to its own devices.”

The abandoned Meteor crashed into woods above Ladybower. These fragments are all that remain.

Joseph Harrington went on to fly airliners for Swissair.

Sgt Harrington’s unit was 66 Squadron based at RAF Linton-on-Ouse near York. This unit was to be less fortunate in the coming years, losing four men and four aircraft in the Peak District; two Gloster Meteors in 1951 on Black Hill and then two Sabres on Kinder Scout in 1954.

Details from Peakland Air Crashes – The North, by Pat Cunningham (2006)