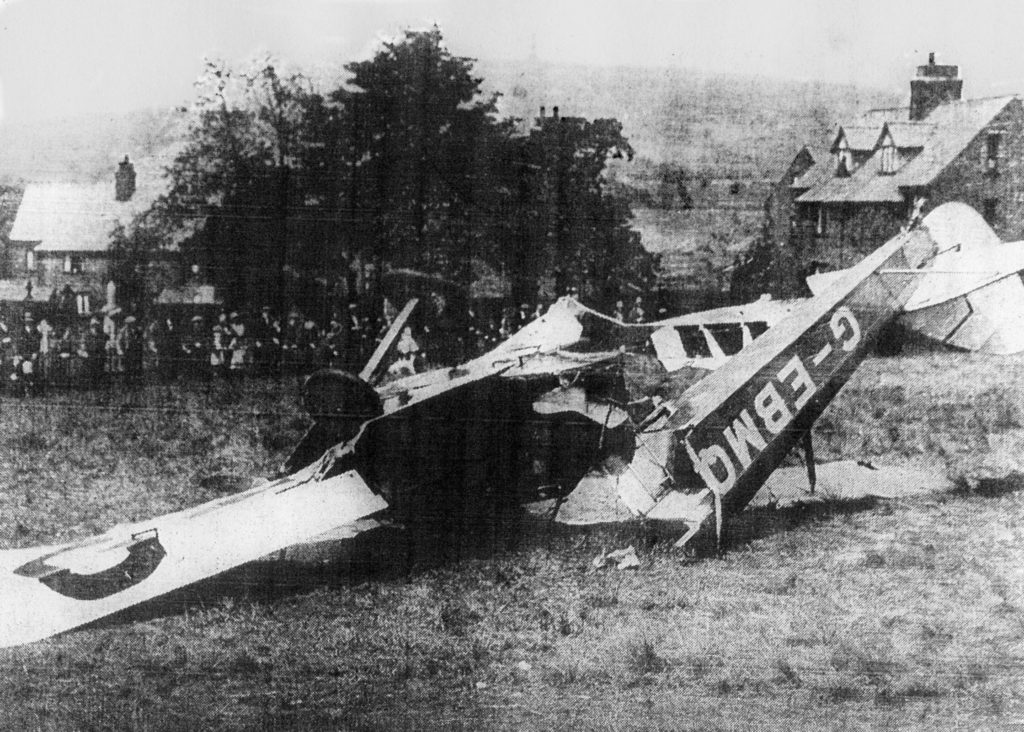 Saturday 14 June, 1930. About tea time. A Mr Harold Foote, aged 28, had a lucky escape while on a summer’s evening jaunt, flying the de Havilland aircraft from Woodford Aerodrome near Macclesfield over his home in the village of Summerseat near Bury, Lancashire, and back again.

He turned round over the village for the flight back to the aerodrome, but a failure to control the rudder meant his aircraft went into a sideslip, lost airspeed and crashed just 500 yards from his home. On hitting the ground, his safety belt broke and Mr Foote was thrown from the aircraft just before it came to a halt, wrecked in a field just above Rowlands Wesleyan Methodist Church. Looking at the wreck above, it seems probable the dodgy seatbelt saved his life.

My father-in-law mentioned this crash site to me. A visit to the library and some internet searching revealed more. The crash site itself is now beneath some houses, built in 1968 I believe. The photo I took below is from the graveyard, just a few yards in front of the newer houses. From this angle you can identify the two buildings in the photo above. The people in the photo above are standing among the older gravestones. 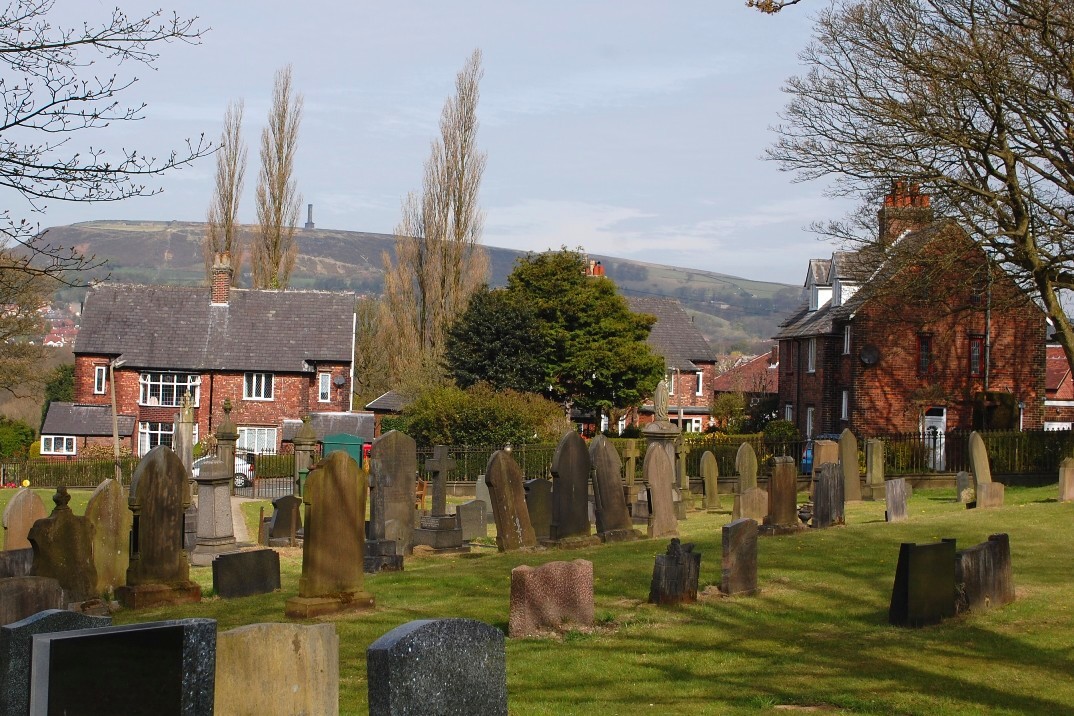 11 weeks after this crash, G-EBMQ had been rebuilt and took part in the Liverpool – Manchester air race from Hooton Aerodrome on the Wirral. It left the workshop only two days before the race! Were it not for a 54 second penalty added because of technical modification (it had stub exhausts which gave it more thrust) G-EBMQ would have won.

Below; Some of the 7 competitors which lined up for the Liverpool – Manchester Air Race, Saturday 31 August 1930. I am unable to identify which of these, if any, is Cirrus II Moth G-EBMQ. But I think it might be the one nearest the camera.

This de Havilland Moth had in fact crashed before; it hit a tree two years earlier probably on take off or landing at Woodford Aerodrome, and was finally written off after crashing in the hills above Leek in 1934. You get the impression people were a bit more adventurous in those days!

Below; Another photo of the crash showing the church (photo courtesy of Peter Houghton) 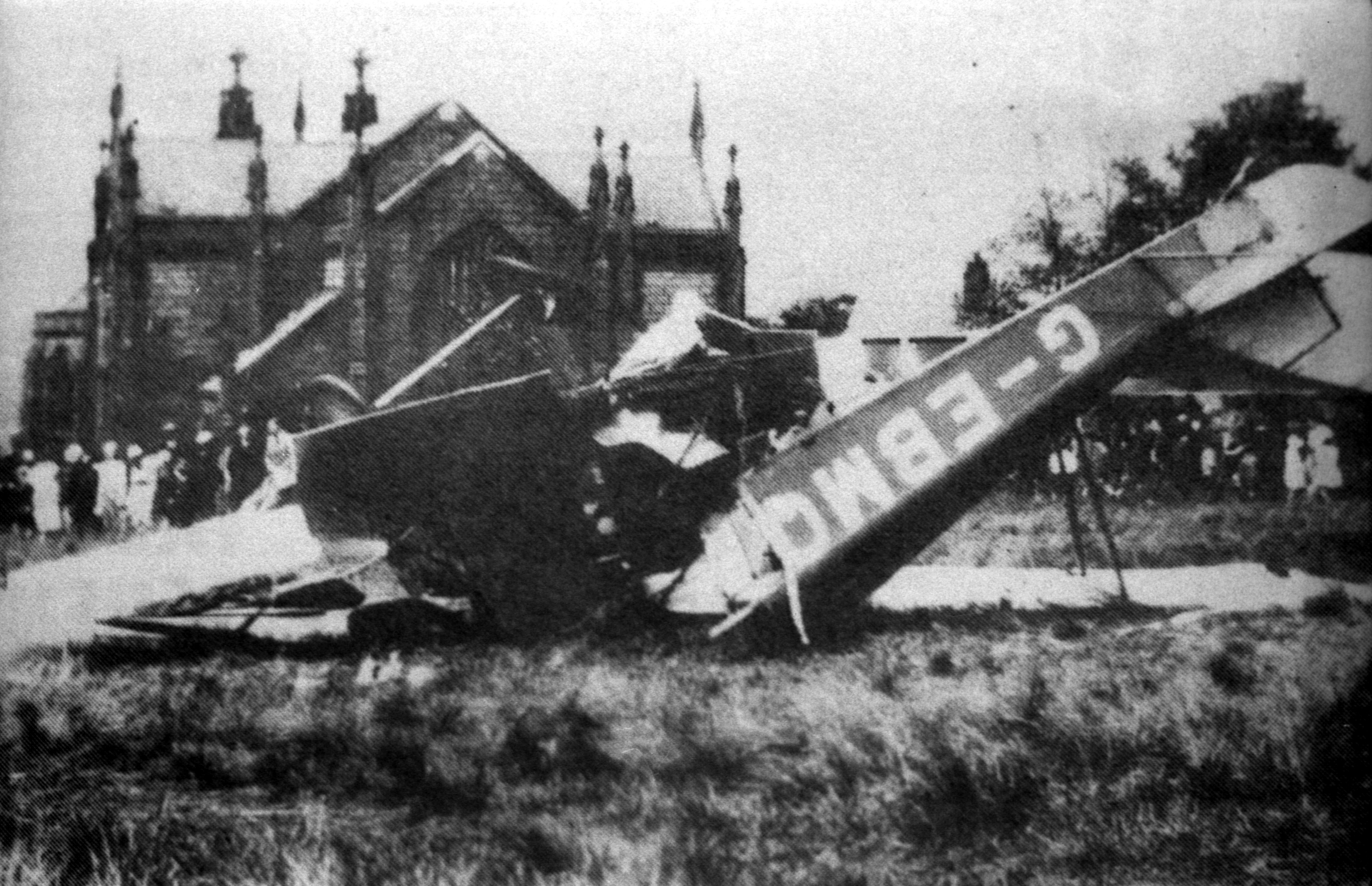