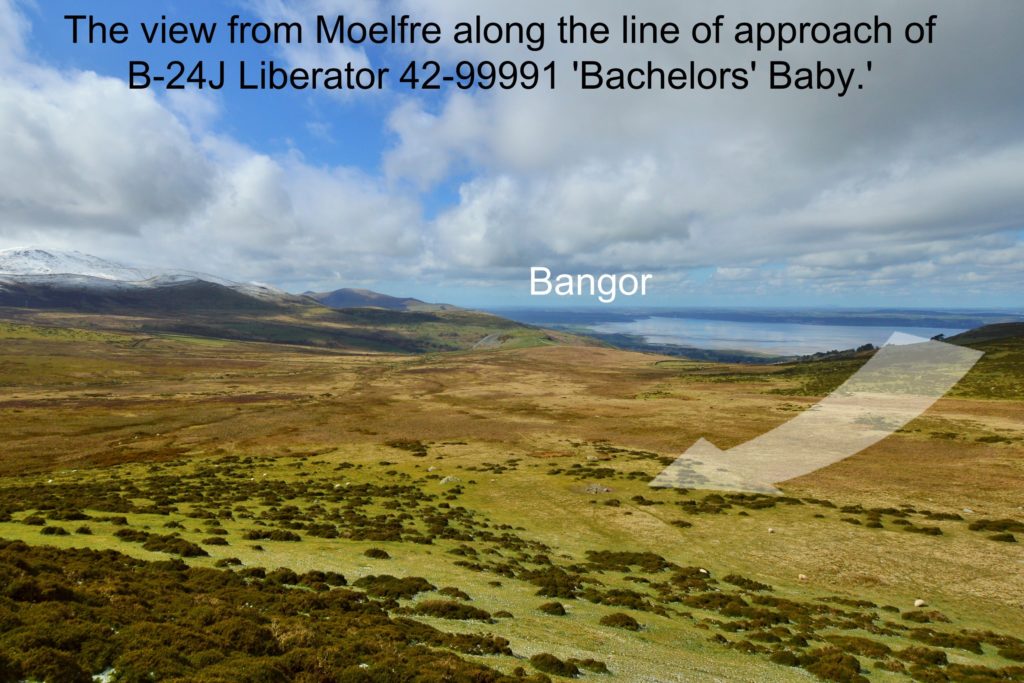 The image above shows the approach from Anglesey. The B-24 struck the hill on the right and skimmed across the moor, before coming to a halt and burning out.

7th January 1944. American bomber B-24J Liberator 42-99991 ‘Bachelors Baby’ had started the last leg of a long journey from Kansas to Norfolk but crashed within a few minutes of take off from RAF Valley on Anglesey.

The B-24 had made the journey to Britain from the USA via the South Atlantic ferry route which took in landings at Florida, Puerto Rico, Trinidad and Brazil, then across the Atlantic to Dakar and then Morocco before arriving at Anglesey. 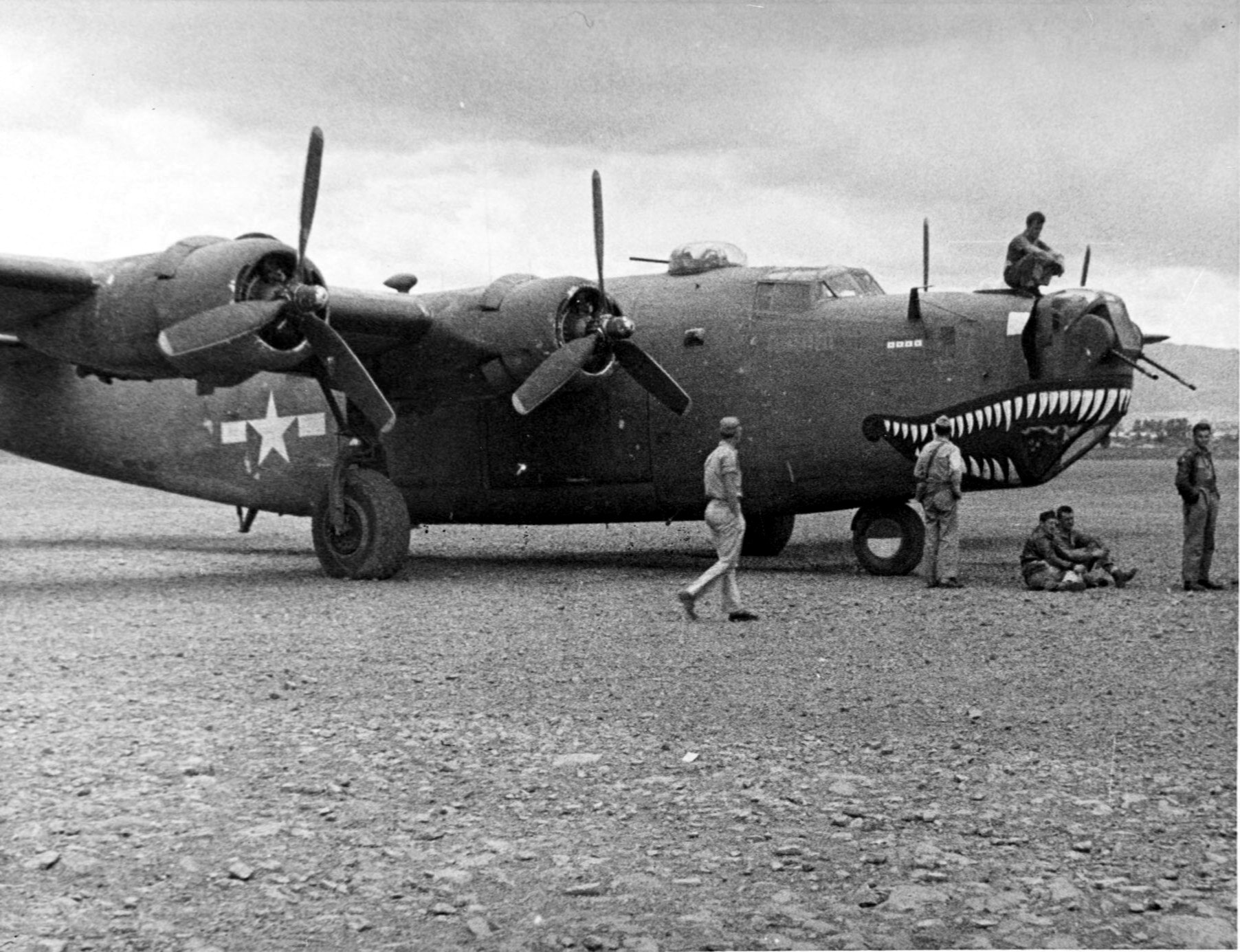 For this last part of the journey to RAF Watton, the crew were joined by a passenger, Technical Sergeant Nicholas Cennemo who had missed his own flight and was hitching a ride. The dog on board was the crew’s mascot, a fox terrier pup named Booster.

Below; photo showing 4 of the crew L-R Sgt Nichols, Staff Sgt Offutt, Sgt Alexander with Booster in his jacket, and Sgt Nieglos. This photo is from “No Landing Place: More Tales of Aircraft Crashes in Snowdonia volume 2” by Edward Doylerush and is credited to Hal Alexander 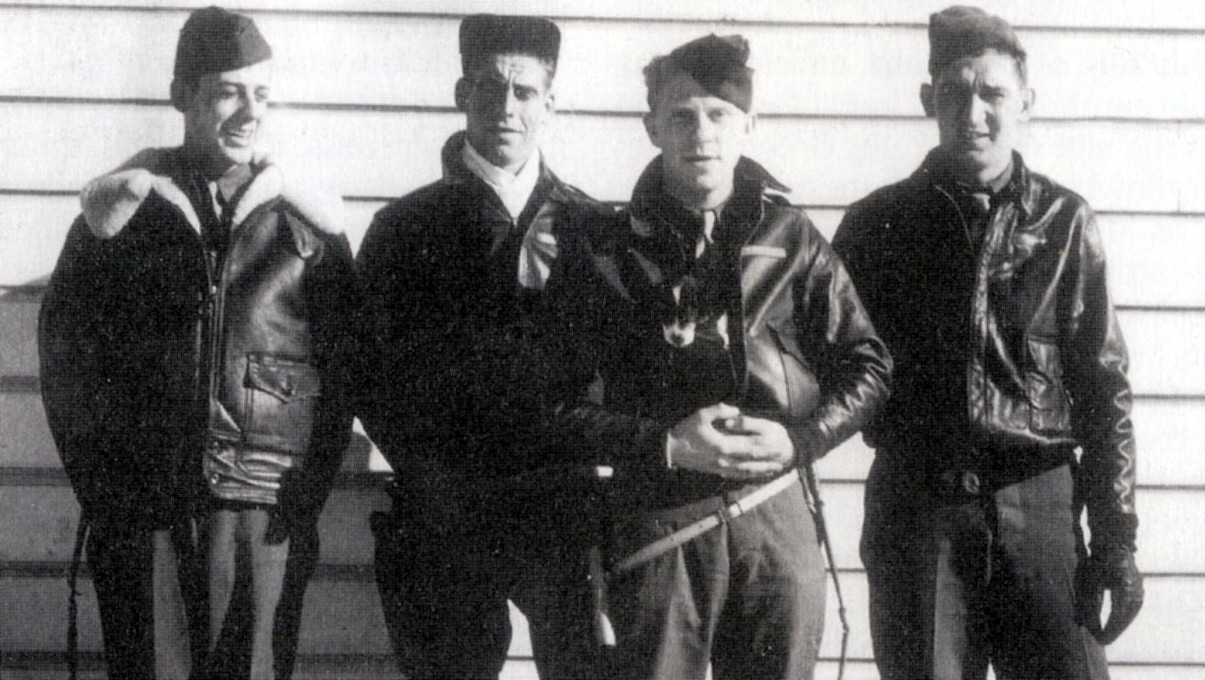 Below; Another crew photo. This is from “No Landing Place: A Guide to Aircraft Crashes in Snowdonia” by Edward Doylerush (the main source of info for this piece) and is credited to A.J.Schultz.
L-R Back – Schultz, Davis, Boyer, Erts,
L-R Front – Offutt, Tymczak, Nieglos, Lorenz, Nichols, Alexander. 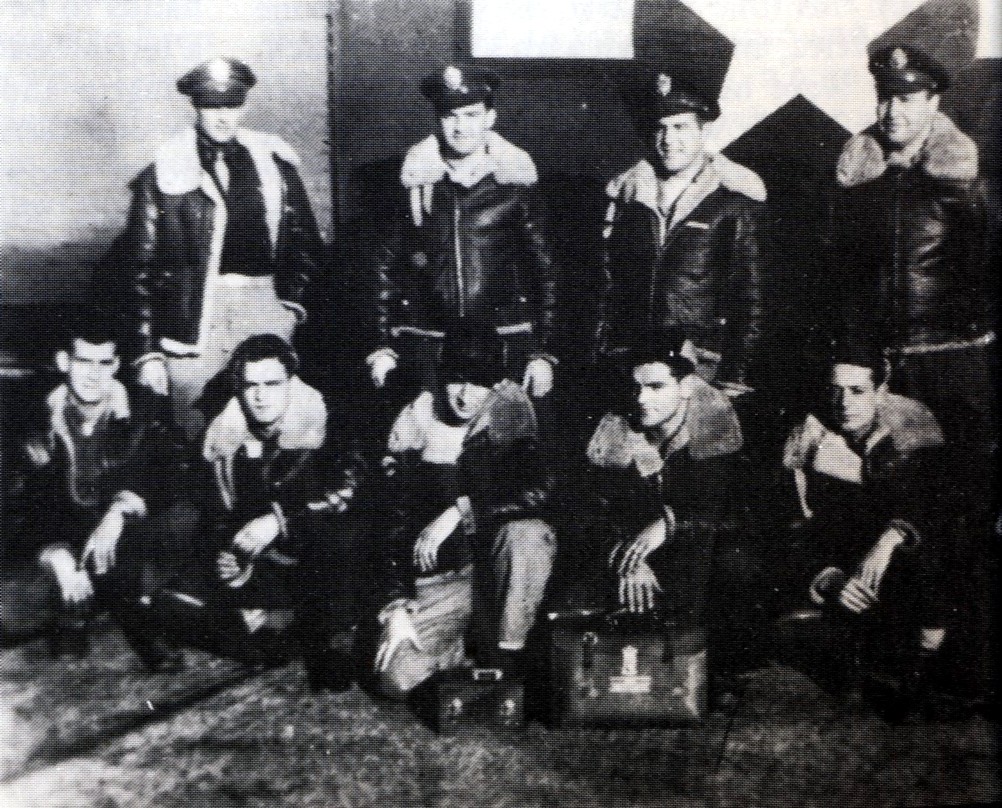 The crew were not entirely in their normal positions for this short journey; 2nd Lt Erts was on the floor of the flight deck, according to Doylerush, along with Sgt Nieglos who was holding Booster. Technical Sergeant Cennemo and ball turret gunner Sergeant Nichols were in the waist section of the B-24 along with waist gunner Sergeant Lorenz. 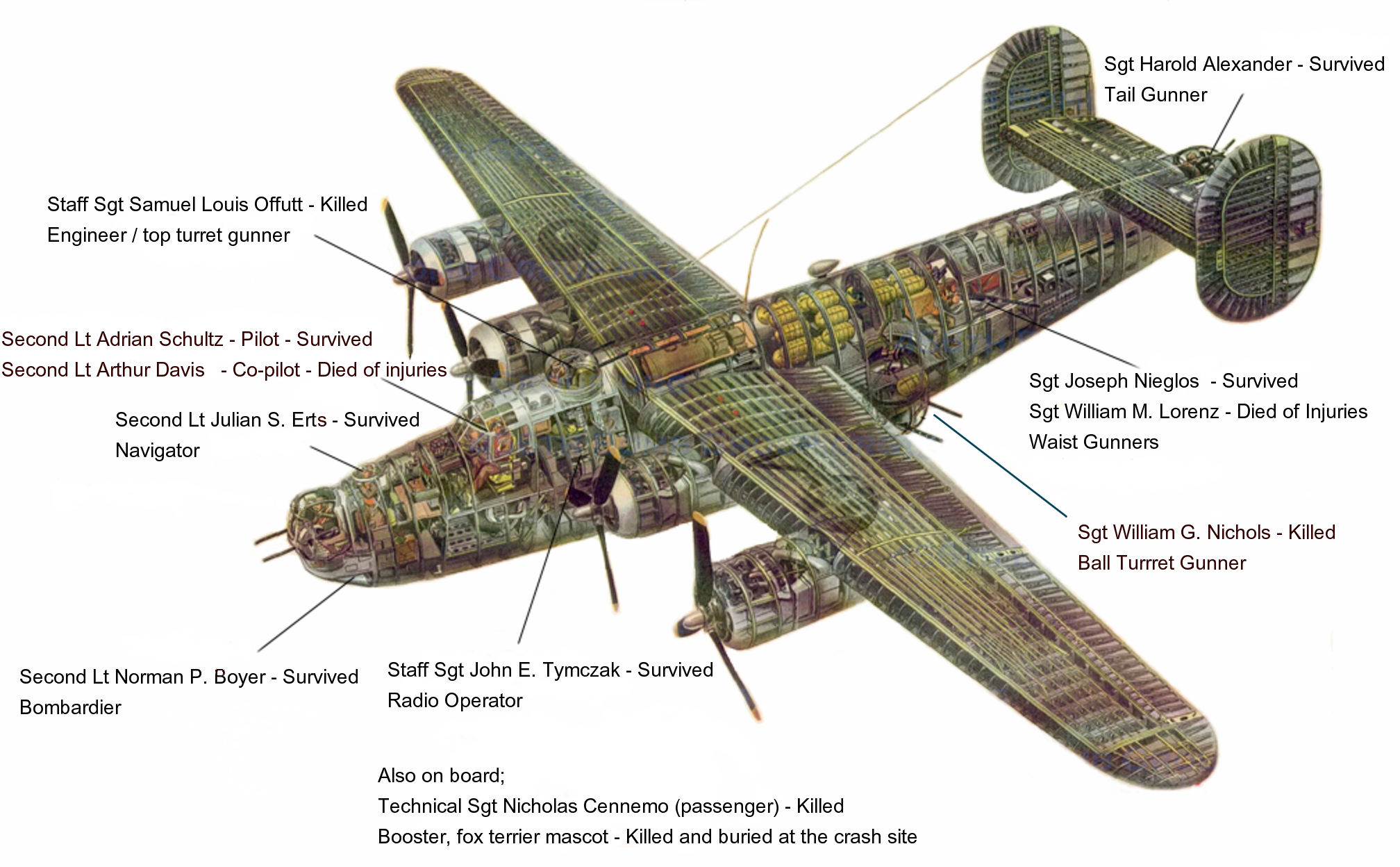 The instructions to the crew were to follow the escort, a B-17G Flying Fortress piloted by F/O L L Dorrie, to Watton in Norfolk. The conditions were poor as they took off at 13.45 with low cloud just 300 feet above sea level and the hills of north Wales completely shrouded by clouds and rain.

Second Lieutenant Adrian Schultz, pilot of the B-24, had orders to fly in formation with the B-17. However shortly after take-off, he began to lose sight of the escort in the low cloud. F/O Dorrie in the leading aircraft instructed him to hold altitude and course which would have taken them along the coast over Rhyl to Chester, but 2nd Lt Schultz replied that he did not know the course and radioed back saying he would meet up with the B-17 above the clouds (the B-17 had already broken through and was above the clouds) and the Liberator began a slow climb.

Bachelors Baby never broke through the clouds to meet up with the escort. F/O Dorrie in the B-17 escort circled Conwy Bay at 500 feet, calling 2nd Lt. Schultz on the same frequency for 15 minutes before returning to Valley where the tower continued to call 42-99991.

Below; My map showing the places mentioned in this narrative

The B-24 was seen by people in the town of Llanfairfechan flying low over the town. Someone on the B-24 called out “look out for the white house!” as the bomber clipped the roof of Plas Heulog on the outskirts of the town and took off the tops of some trees. 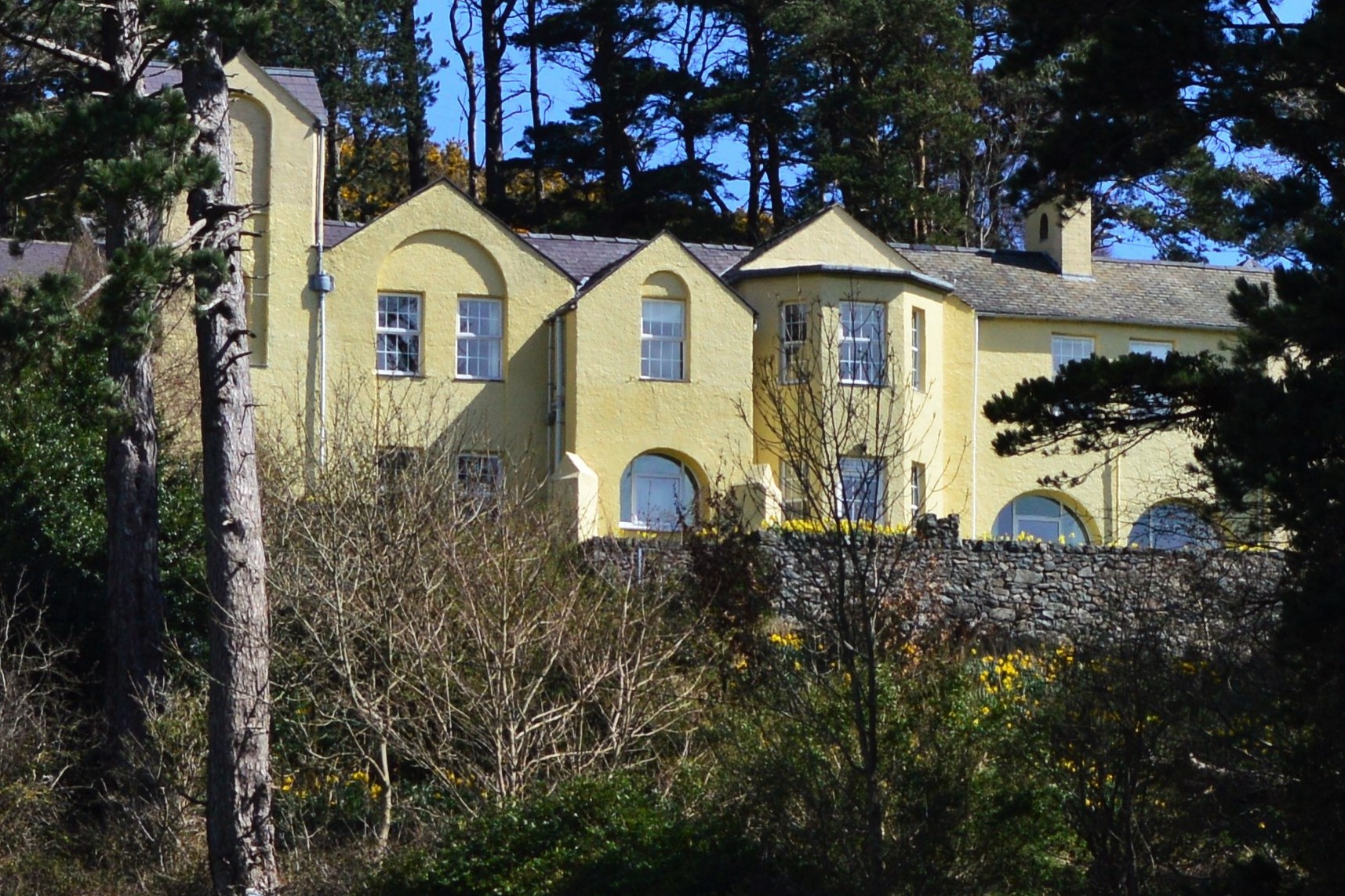 Below;
The rocky outcrop (referred to in Doylerush as Mynydd Bach) below Yr Orsedd. The B-24 struck here before becoming airborne again 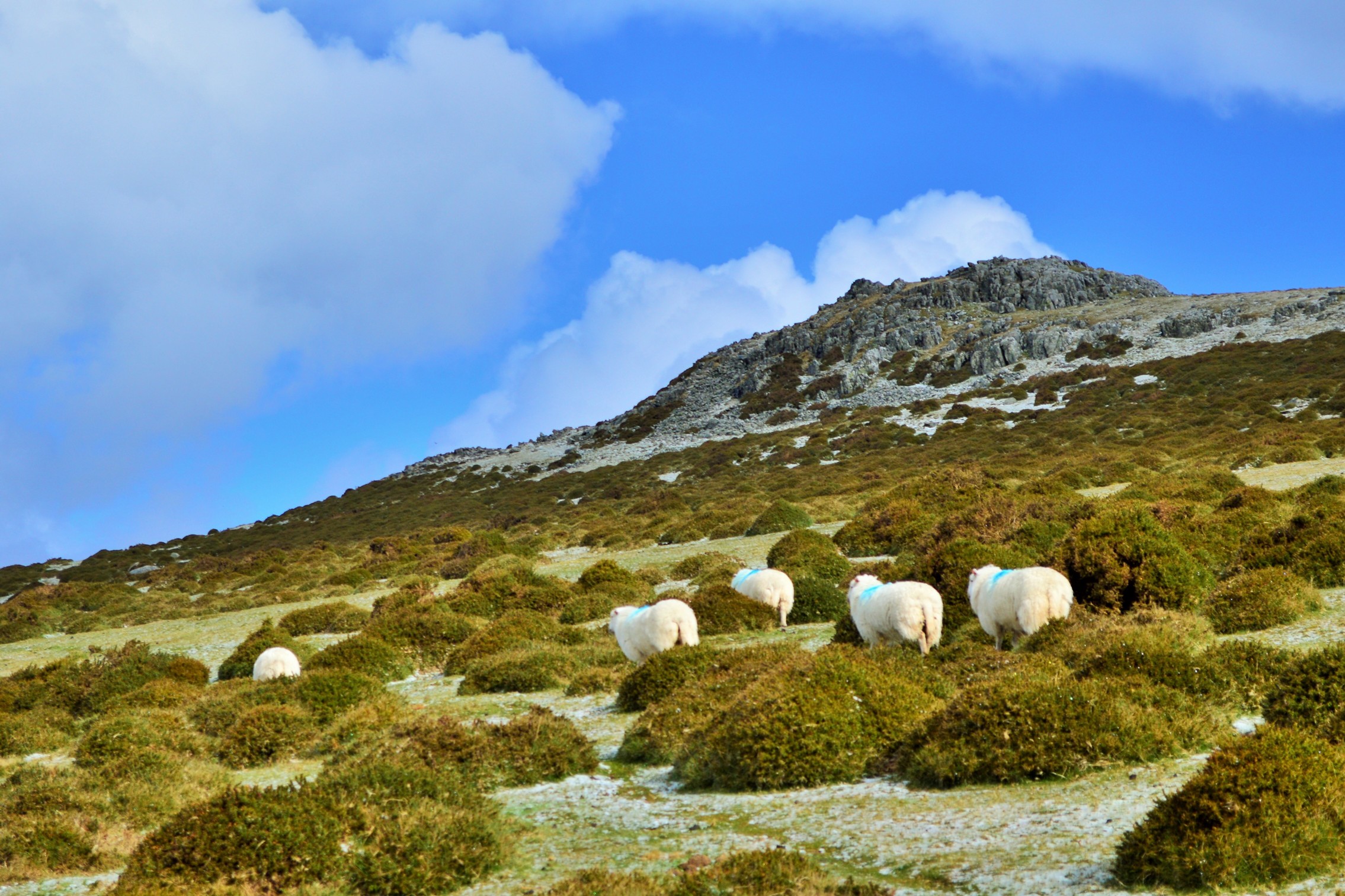 The impact with the hill tore off the bomb-bay doors and stuff from the aircraft was strewn across the hillside. However, the aircraft carried on flying, albeit without the pilot in control, and the bomber skimmed the moor for 500 metres before coming to earth in a 100 metre skid, sliding to a halt below the hill of Moelfre, turning as it did so.

There would have been more survivors had a fire not broken out, fuel in the tanks in the wings pouring into the waist section of the aircraft. 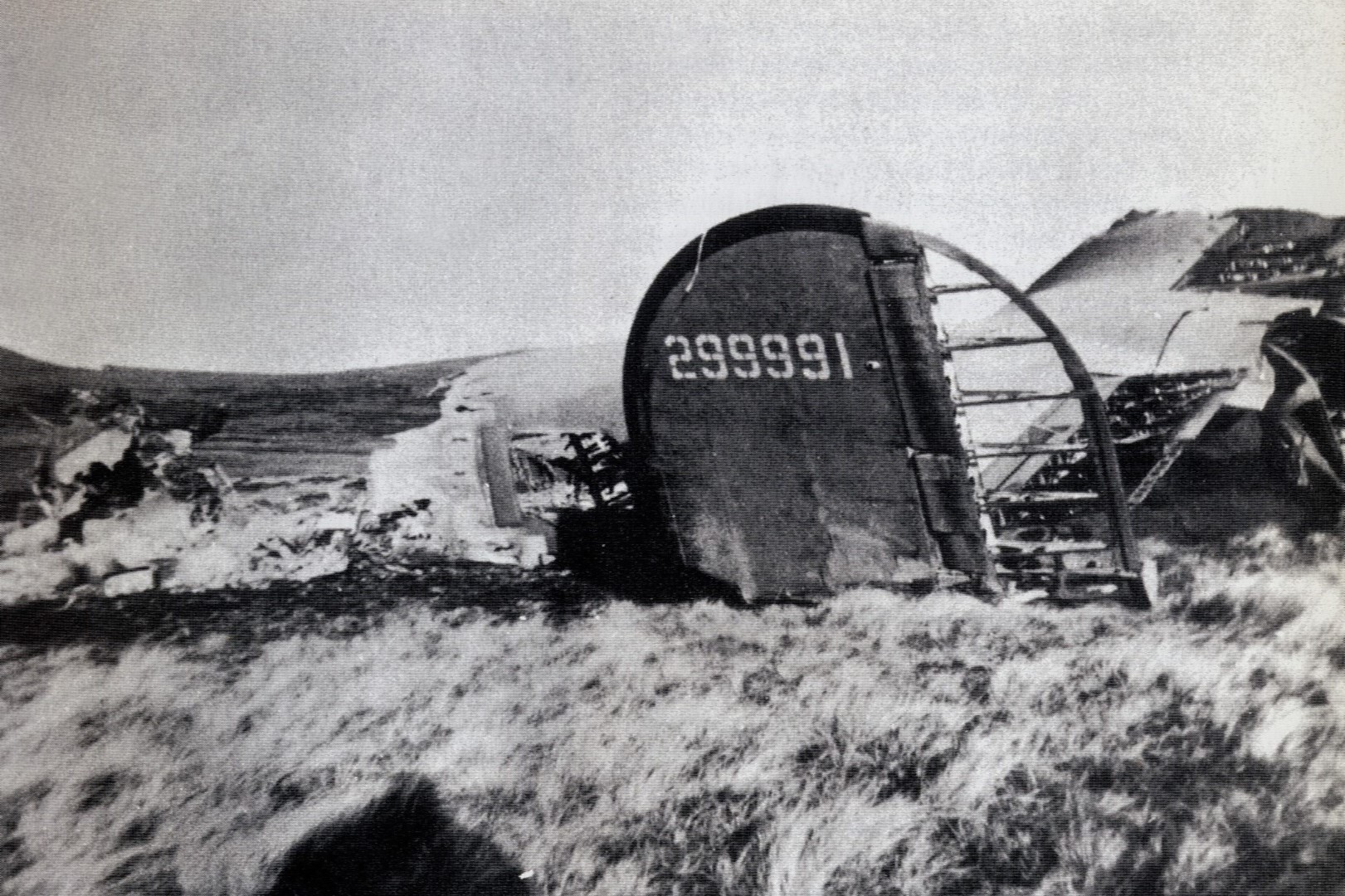 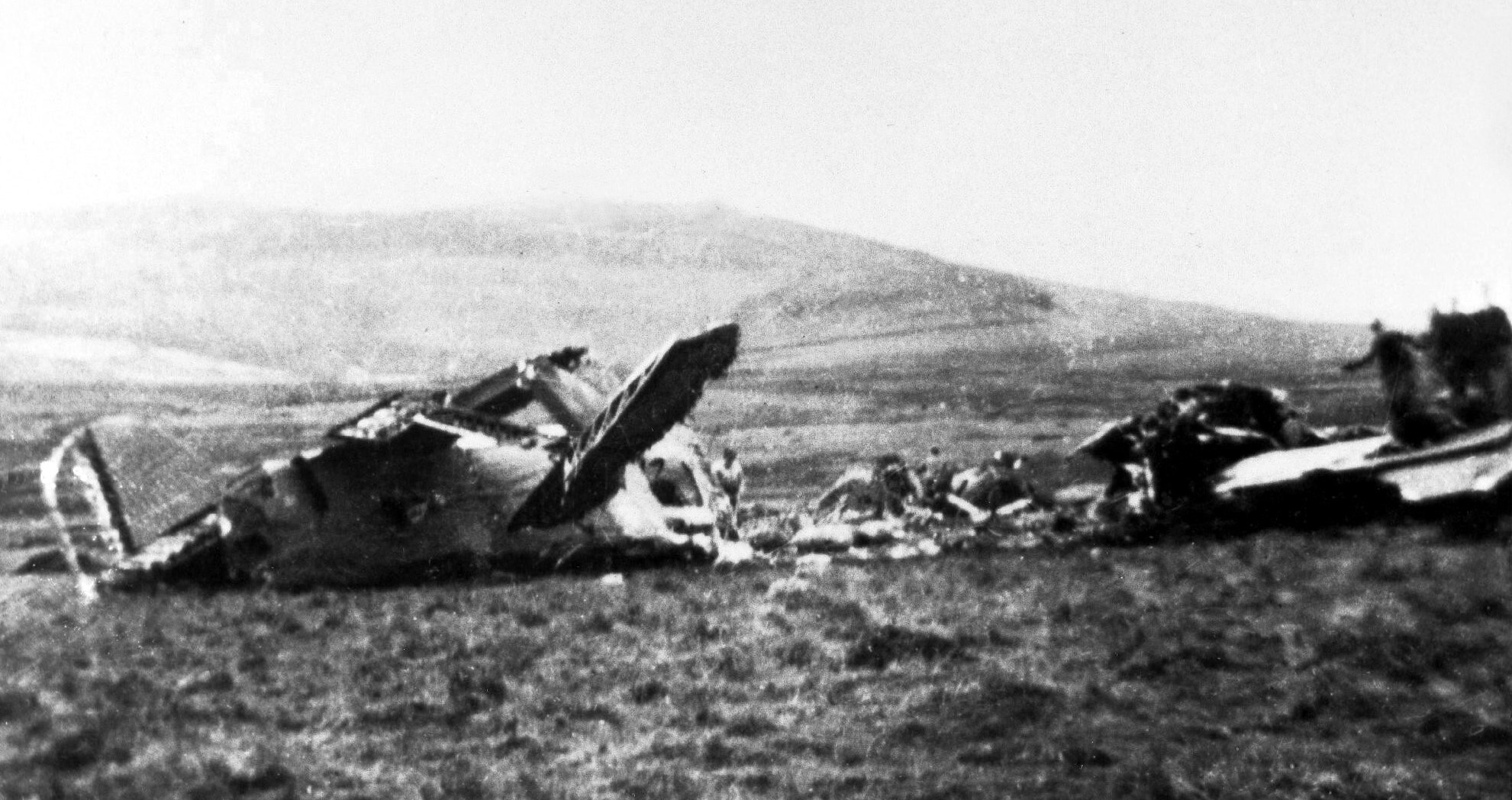 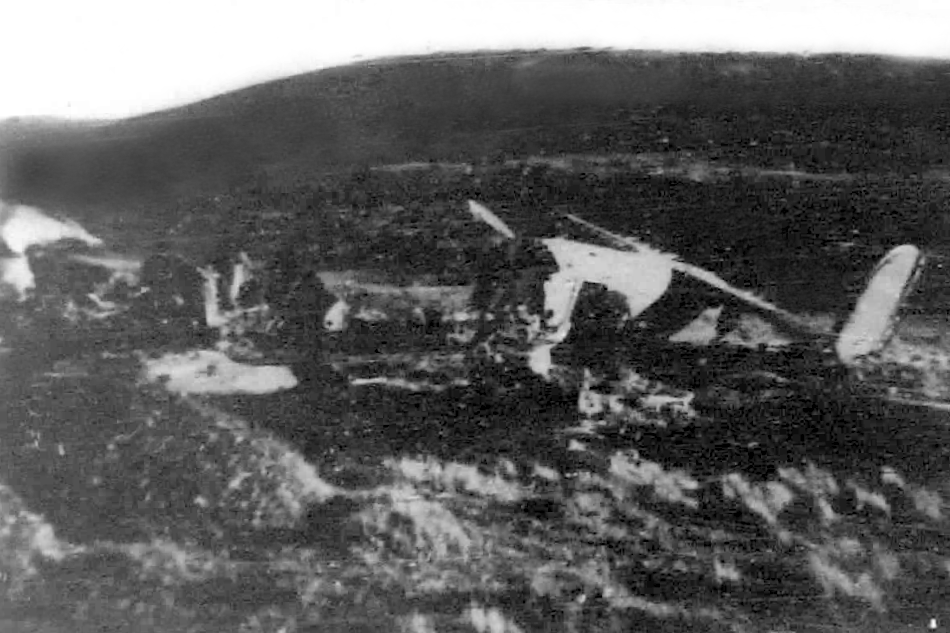 The engineer / turret gunner had been trapped when the gun turret ring gear fell on him. It would appear that Sgt Nichols and passenger Technical Sergeant Cennemo also died in the fire in the waist section of the aircraft. Sergeant Lorenz was pulled from the wreckage but died of his wounds at the Caernarvonshire and Anglesey Hospital in Bangor the day after, as did Second Lieutenant Davis, the co-pilot.

Doylerush says that Booster was killed in the initial impact with Yr Orsedd.

Somehow Sergeants Tymczak and Nieglos managed to get away from the burning wreck and survived.

2nd Lt. Boyer had thought he was the only survivor as he clambered from the wreck when he heard 2nd Lt Erts, who was trying to hide from the exploding ammunition. The bombardier then heard Sgt Alexander trapped in the rear turret and went to help him. Once Sgt Alexander was free, 2nd Lt. Boyer turned his attention to Sgt Lorenz, and hauled him out of the wreck, though as noted above, the waist gunner died of his injuries shortly afterwards.

Second Lieutenant Boyer then set off in what he thought, in the low cloud covering the moor and the confusion of the crash, was the line of flight back to the coast and the town they had just passed. However, the Liberator had turned in its last moments and the direction 2nd Lt Boyer set off on was not west to the coast, but south east and into the mountains. See map above.

Below; 2nd Lt Boyer left the crash site to find help but headed further into the hills 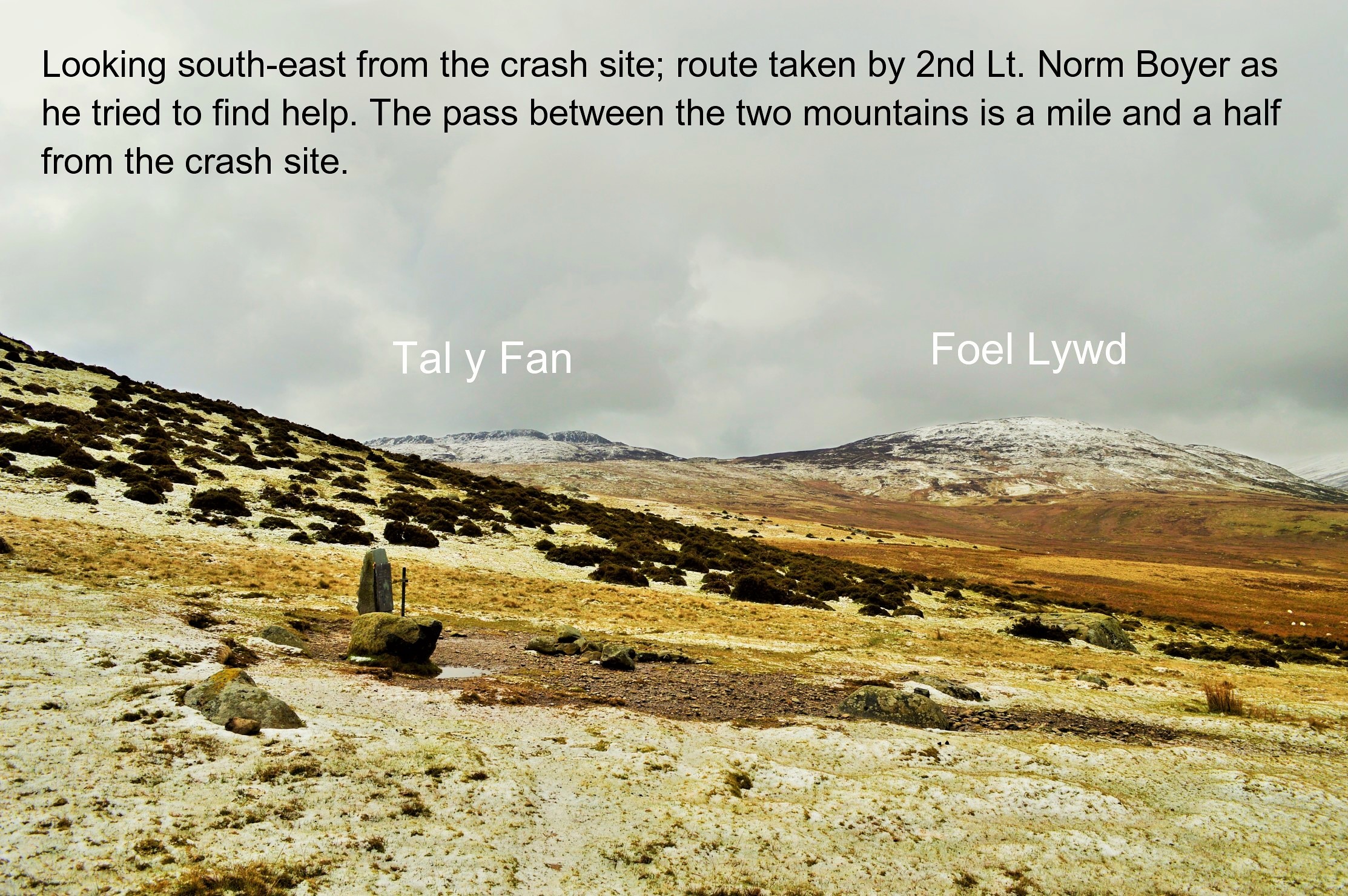 Although he could not see much of the terrain around him, 2nd Lt. Boyer tramped across the moor in the rain and low cloud and across the pass between Tal y Fan and Foel Lwyd, a mile and half from the crash site. He walked 4 miles before he eventually met someone who could help him. His route took him over the pass and down to a holiday cottage at Hafoty Gwyn which had been locked up for the winter. 2nd Lt Boyer broke in and lit a fire to dry himself out.

Below; Hafoty Gwyn as it looks now 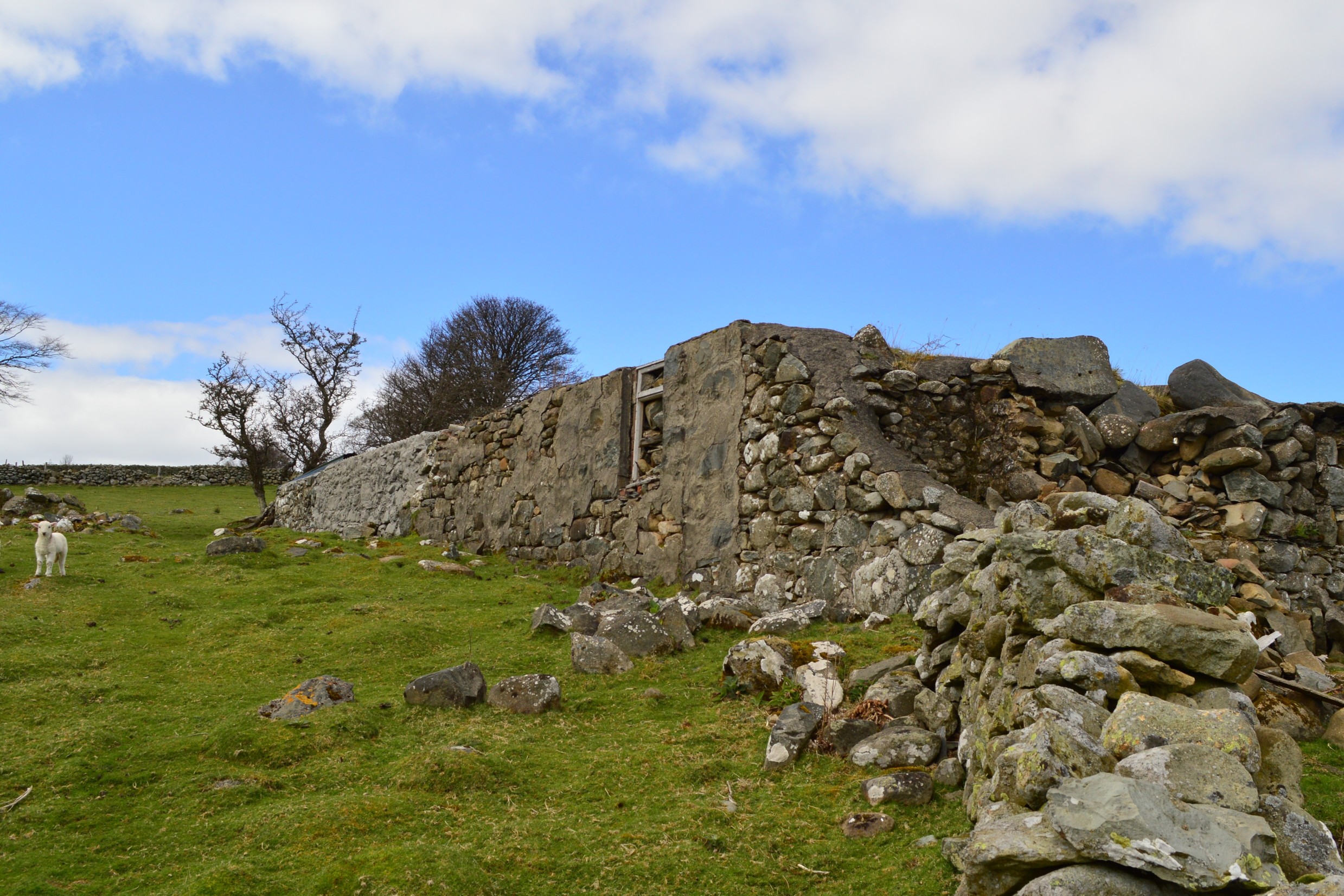 Having warmed himself a little, he left some money on a table, and continued further along the road, climbing a dry stone wall upon seeing a farmhouse. Here at Waen Newydd the Roberts family provided some dry clothes before taking him to Llandudno General Hospital.

Below; Second Lieutenant Boyer would have climbed this wall to get to the farmhouse at Waen Newydd where he at last found some help 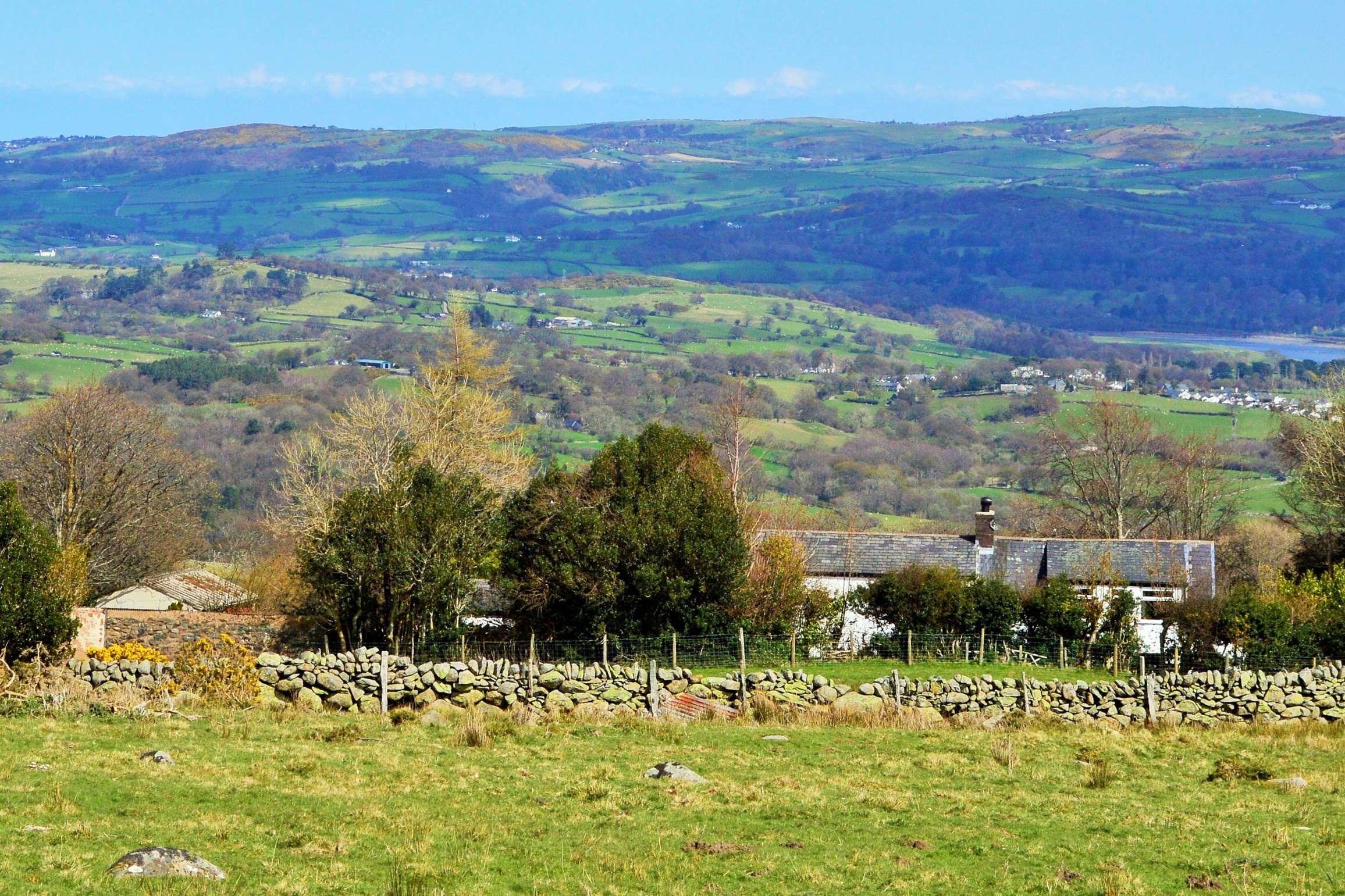 At the crash site, people from Llanfairfechan had now arrived. A Mr Robert Jones and Mr Ellis Lewis found Sergeant Alexander lying some distance from the burning wreck and carried him back down to the farm at Blaen Llwyn.

Meanwhile, apparently unknown to them (and not surprising given the vile weather, the fire and the ammunition exploding all around), a policeman also arrived at the scene. PC Hughes Parry found 2nd Lt Schultz who started to head off to find help. The policeman also appears to have become disoriented and together he and the injured pilot tried to find a way off the hill and back to civilisation. Slipping and sliding down a muddy hillside, they eventually arrived at Graig Llywd Hall (then a school).
2nd Lt Schultz was taken from there to the hospital at Bangor. 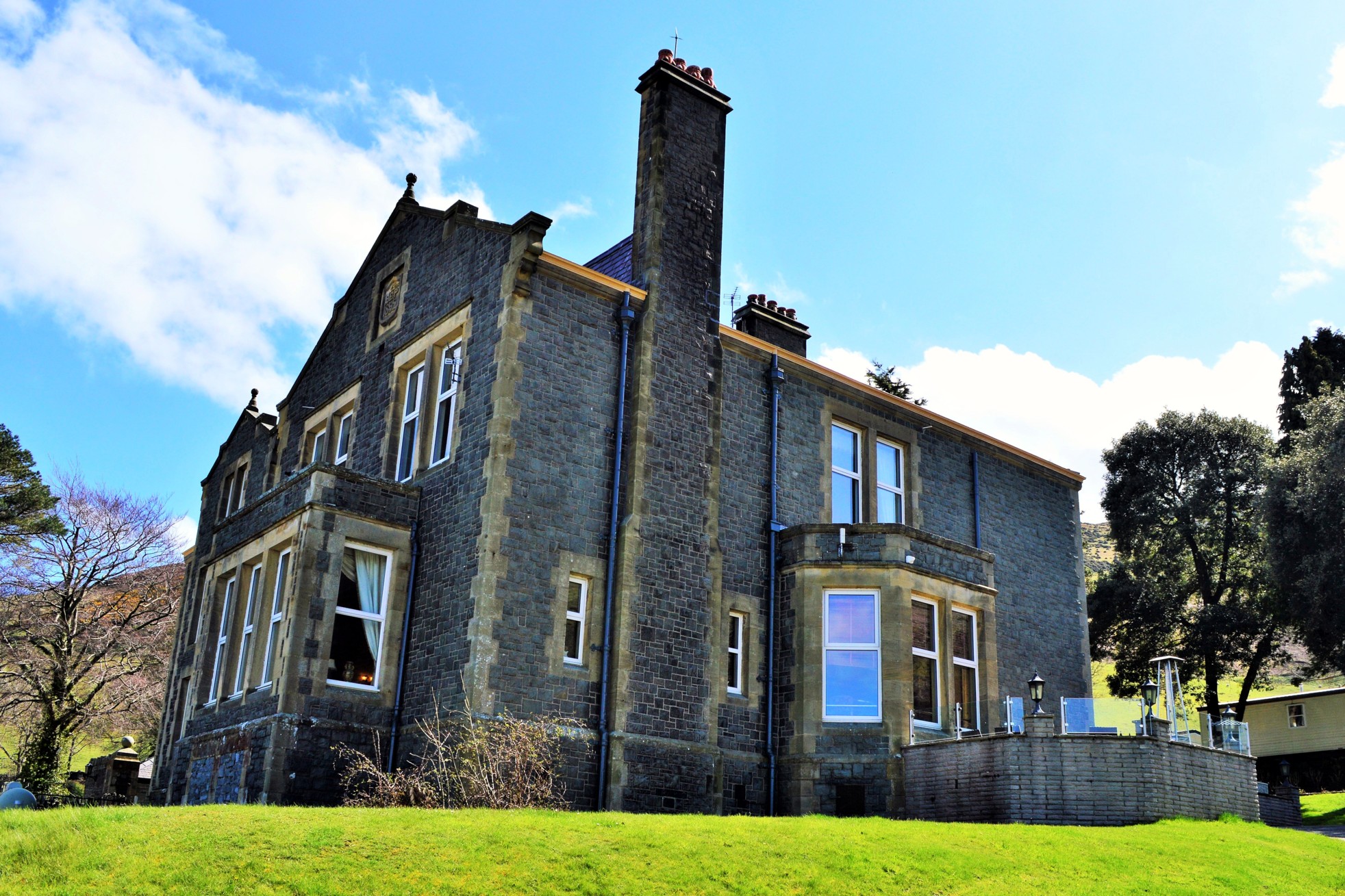 The rest of the crew were supported off the hillside and down to Blaen Llwyn by men from the Penmaenmawr quarry.

Below; The farmhouse at Blaen Llwyn. The hill directly above the farm in this photo is the outcrop which the B-24 first struck. See map above. 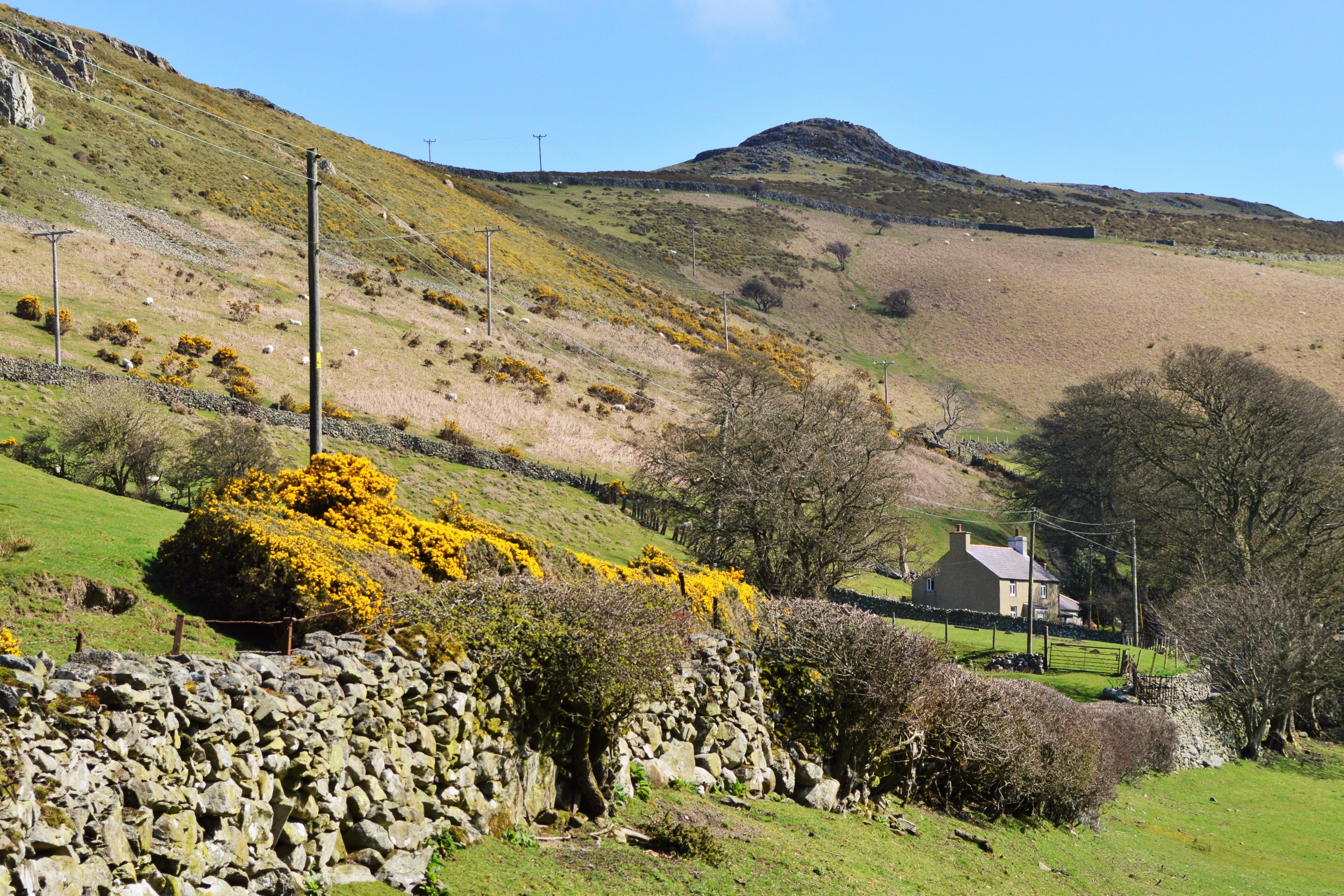 The Aircraft Accident Report
2nd Lt. Schultz had been briefed to land at the nearest aerodrome or return to Valley in the event of severe weather or difficulties and the accident investigation noted the accident “could have been avoided had the pilot maintained his same course or turned out to sea rather than toward the mountain range.” However, both 2nd Lt Schultz’ testimony and that of the escort pilot record that the former did not know his course, his instructions had been just to follow the escort. The cause of the crash was put down to a “faulty and careless operation of aircraft” and a “momentary lapse of mental efficiency” on the part of the pilot.

Below; Looking down to the crash site from the hill of Moelfre. The aircraft came in from the upper right corner of the frame. In an area rich in neolithic remains, the crash site has itself the appearance of a prehistoric circle with the two monuments in the centre. 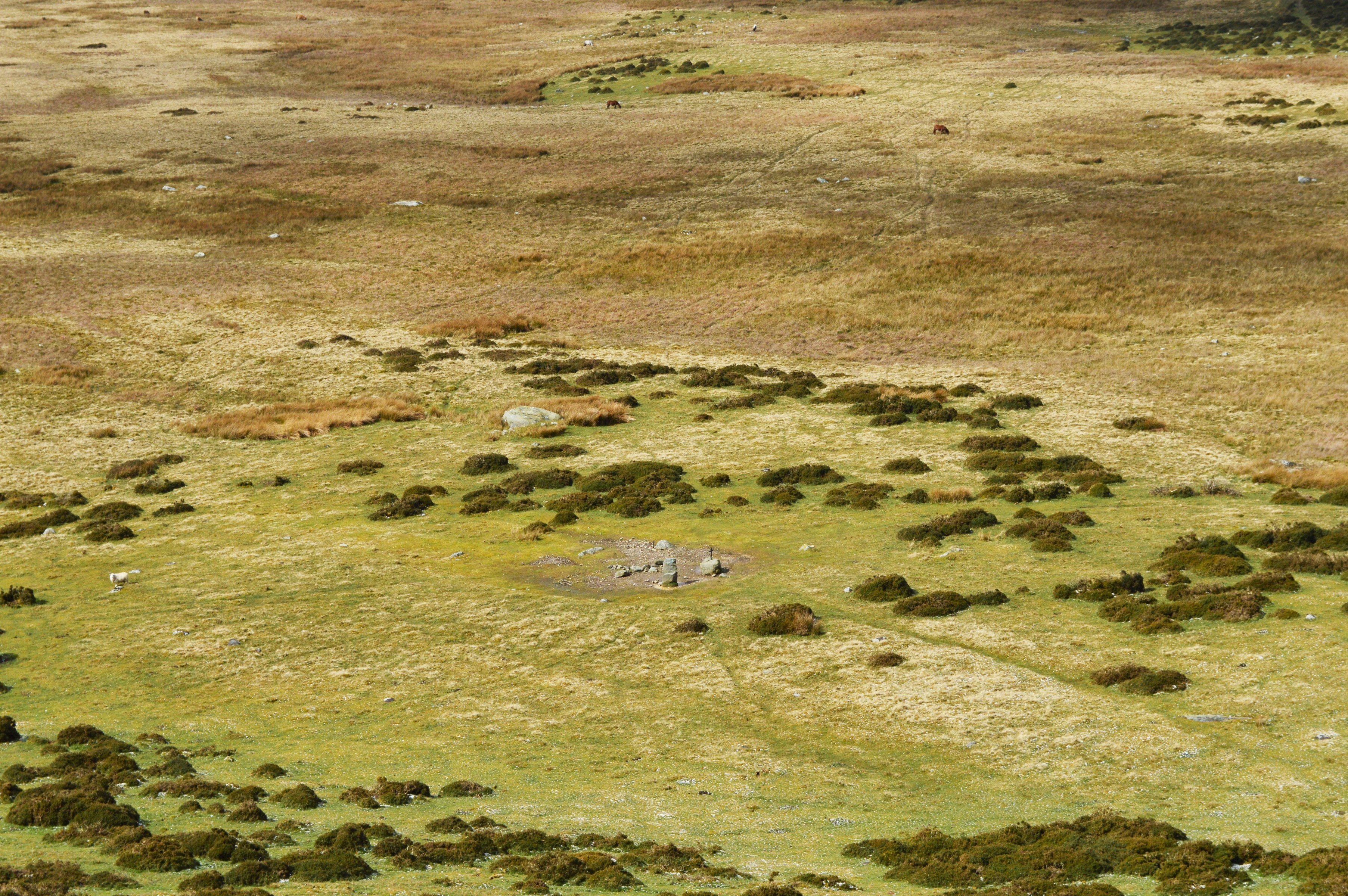 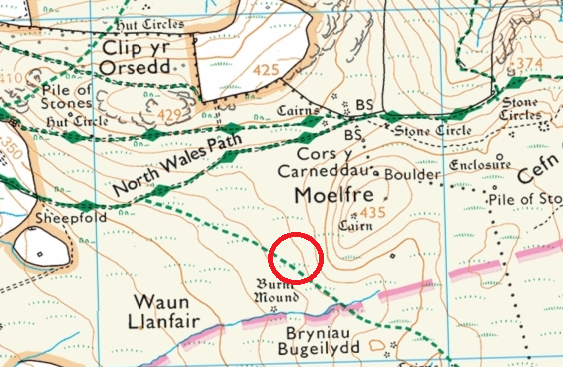 At the crash site there is very little remaining to show what happened here. Some screws, bits of wire and lumps of molten metal remain on the scar on the moor which is overlooked by the two memorials to those who died here.

Below; The largest piece of debris I found near to the crash site. 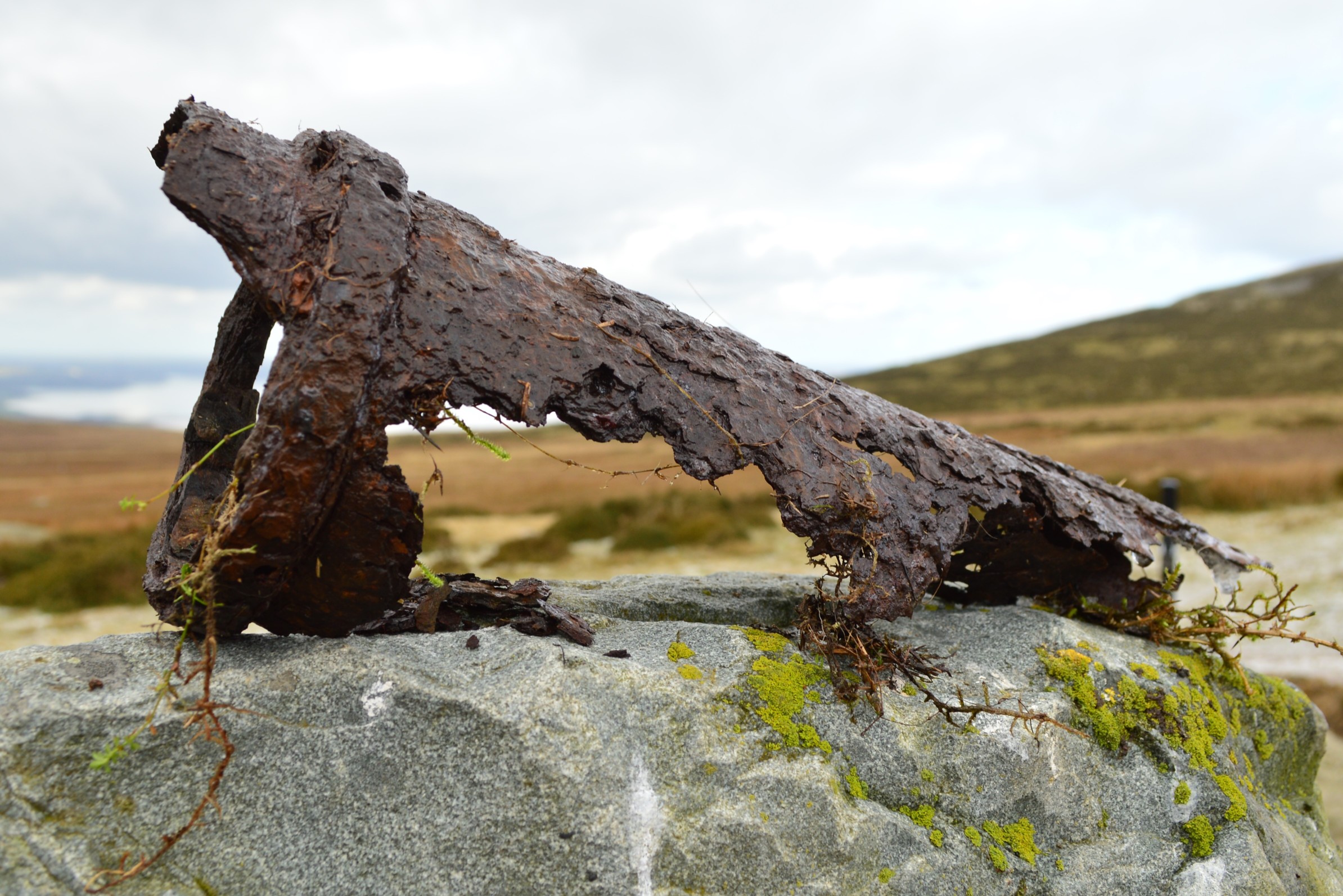 These are some smaller fragments, typical of all that is left now at the site 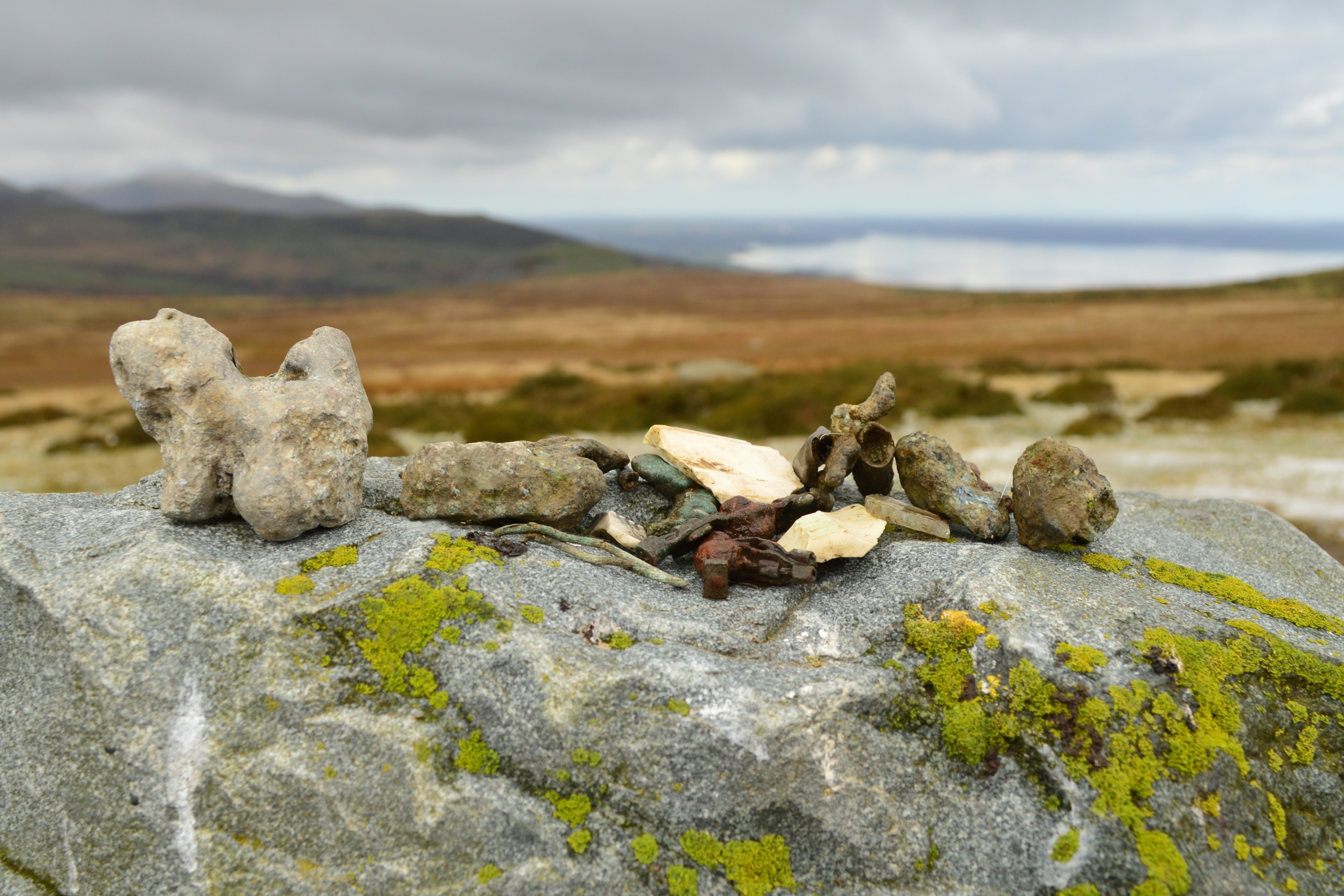 Below; Booster, the fox terrier pup from Kansas, is buried here. 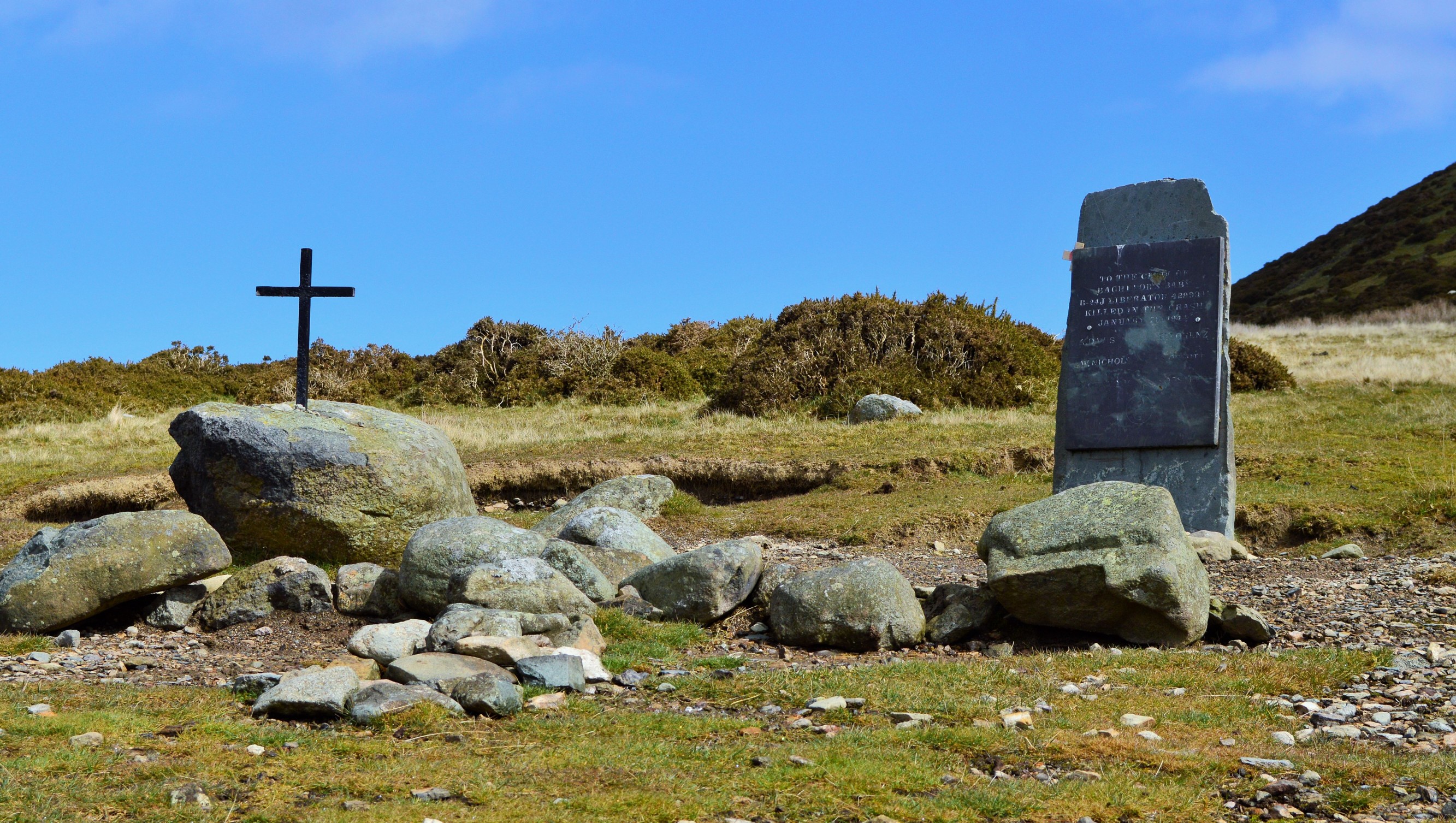 Below; This memorial plaque was placed at the site in 1980 and was restored in July 2018. A number of the crew returned to this spot to pay their respects to their lost comrades including Adrian Schultz, Hal Alexander and Julian Erts.

This photo of the restored plaque is kindly provided by Greg Wood and is used with his permission. (The photo further below shows how it looked before it was restored). 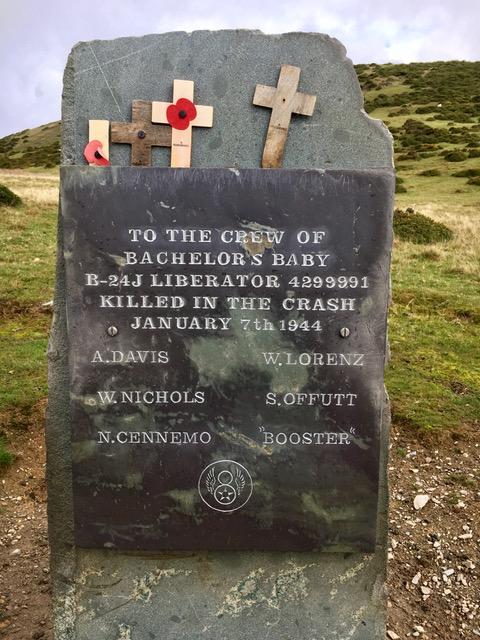 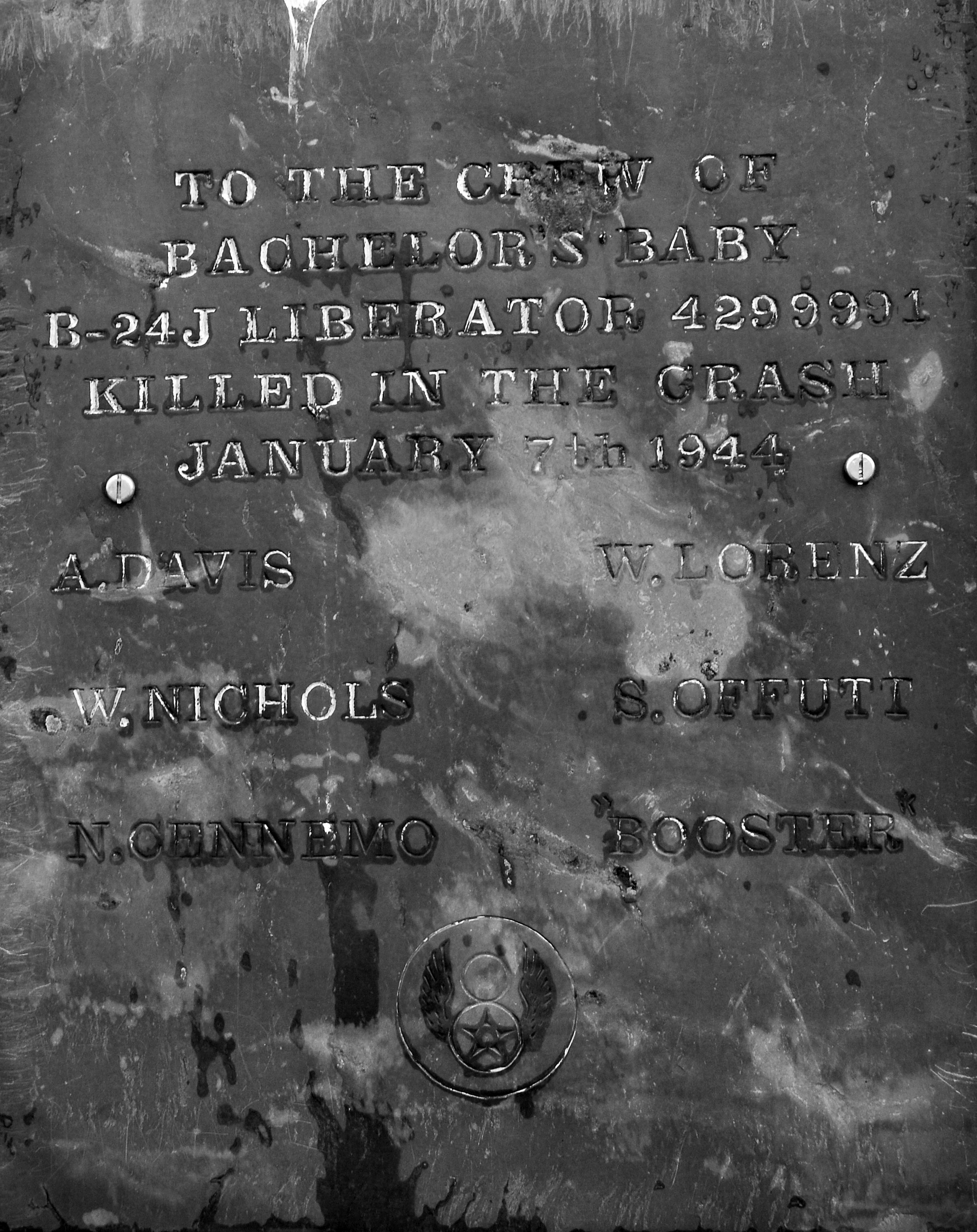