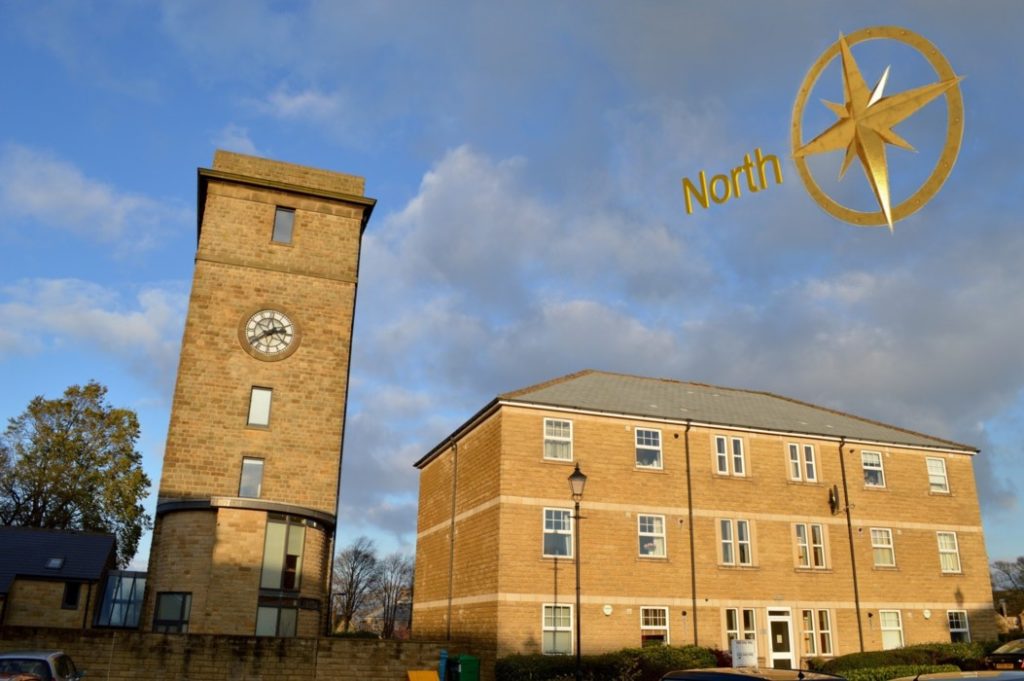 The photo above shows the clock tower which is all that remains of Lodge Moor Hospital on the western edge of the city of Sheffield. The Thunderstreak came in from behind the point of view of my photo, heading north-east and crashed over to the right, just missing the tower. The site is now occupied by a new housing estate.

First Lieutenant Roy G Evans USAF was on a solo exercise from the American air base at RAF Sculthorpe near Norfolk when his jet fighter, a Republic F-84F Thunderstreak serial number 52-6692, ran out of fuel over Derbyshire.

1st Lt Evans attempted to relight the engine but without success so he decided to bail out. He radioed a final message which was picked up at Burtonwood, saying
“I have flameout – leaving the aircraft”

“We couldn’t quite get what he was trying to say,” was the comment made back at Burtonwood about which author and former pilot Pat Cunningham DFM says reminds him of the RAF joke,
“If I say Eject, don’t say ‘What?’ or you’ll be talking to yourself.”

Having ejected from the Thunderstreak, 1st Lt Evans parachuted down to a spot in the Peak District (east of Hathersage though the Daily Mirror of 10/12/55 has it he landed on Mam Tor).

His abandoned jet continued to descend, gliding over several miles of empty moorland before hitting the ground. Alas the place it came down just happened to be at Lodge Moor Hospital, the first building on the edge of the city of Sheffield. Looking at its trajectory, a slight tweak of the stick before 1st Lt Evans bailed out, as Cunningham comments, or a bit of luck in the jet having just a few more feet of altitude, could have seen it clear the buildings and crash harmlessly on moorland or farmland.

Below; Map showing the approximate route of the abandoned Thunderstreak 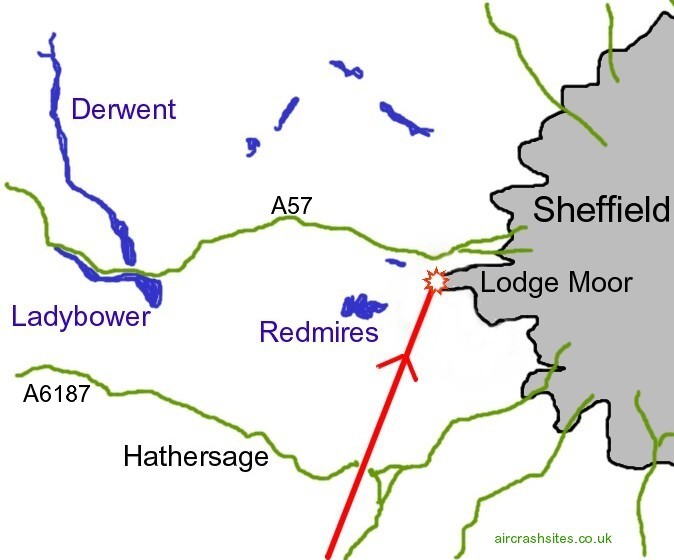 The jet smashed through two wards before coming to rest just short of the ambulance garage in which was reportedly stored 1,000 gallons of petrol.

Below; Overlaid photo showing part of Lodge Moor Hospital and the wards into which the jet crashed. It struck the roof of Ward North Two and ploughed through Ward North One before finally coming to rest in two main sections in front of the garage and mortuary 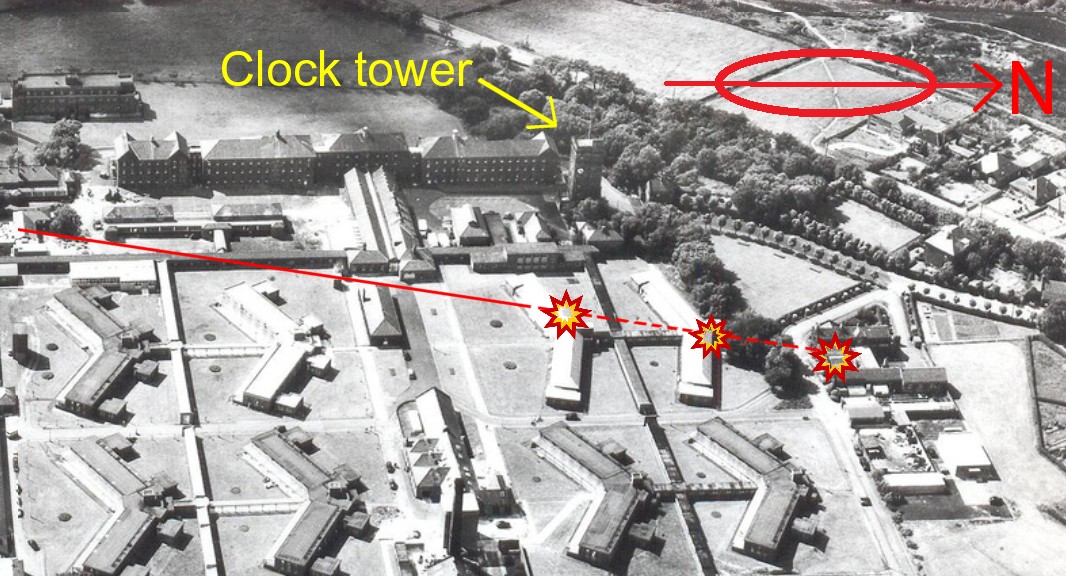 One patient was killed; mother of 5 children, Mrs Elsie Murdoch aged 46 of South Road, Sheffield, died of head injuries. That there was just one fatality is very fortunate though Mrs Murdoch’s family won’t have found much comfort in that. A 20 year old nurse, Margaret Schofield reportedly stayed with Mrs Murdoch, comforting her as she died amid the chaos of the half demolished building, with ammunition cooking off in the fire and the risk of another explosion. 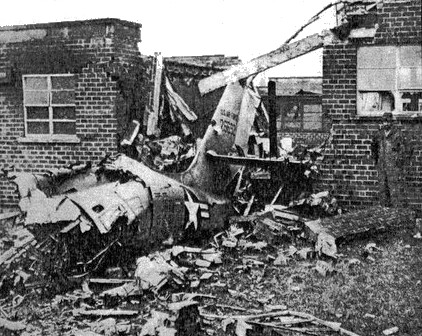 Cunningham refers to another nurse called Shirley Taylor who with her colleagues had restored some sort of order by the time the fire brigade arrived, moving patients from the risk of harm and treating the 7 others who had been injured in the accident.

Below; Google map showing the area now and roughly where the Thunderstreak crashed.
The crash site and the hospital are now beneath a housing estate. Only the tower remains. 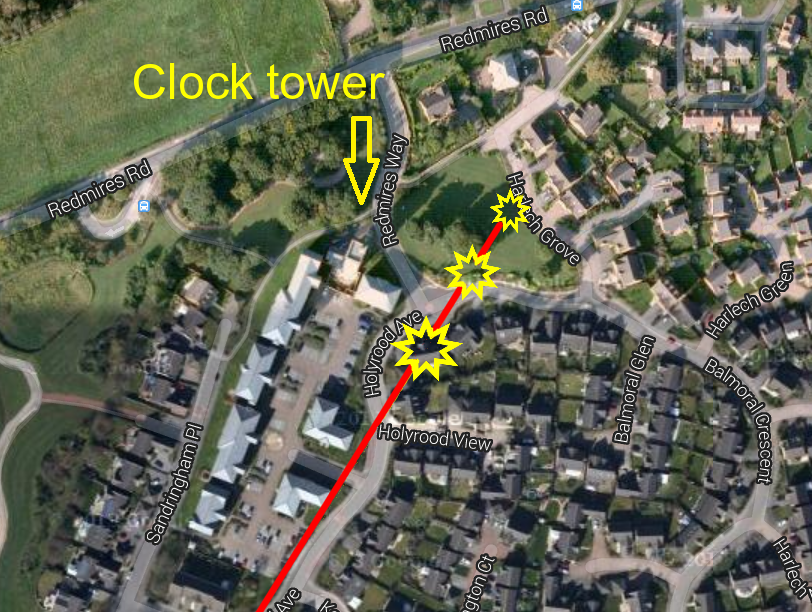 Further research beyond the main sources revealed First Lieutenant Evans had died within three years of this incident, and that an application from his wife to the US government for a bronze headstone marker had an administrator’s handwritten note on the back stating “place of death Morrocco.”

Checking the squadron’s records, it was possible he had been killed in an air crash at the Nouasseur air base, which is just south of Casablanca. Further digging around revealed that, in a sad twist to the events of December 1955, 1st Lt Evans again bailed out of an aircraft (this time an RF-84 Thunderflash, a photo recon version of the F-84 Thunderstreak, serial number 52-7349) shortly after take-off from Nouasseur but did not survive.

Below; Photo of RF-84s of 1st Lt Evans’ unit, the 66th Tactical Reconnaissance Wing*, near Casablanca, Morocco, 1956. 52-7349 is not in this formation. Photo from Wikipedia Commons. 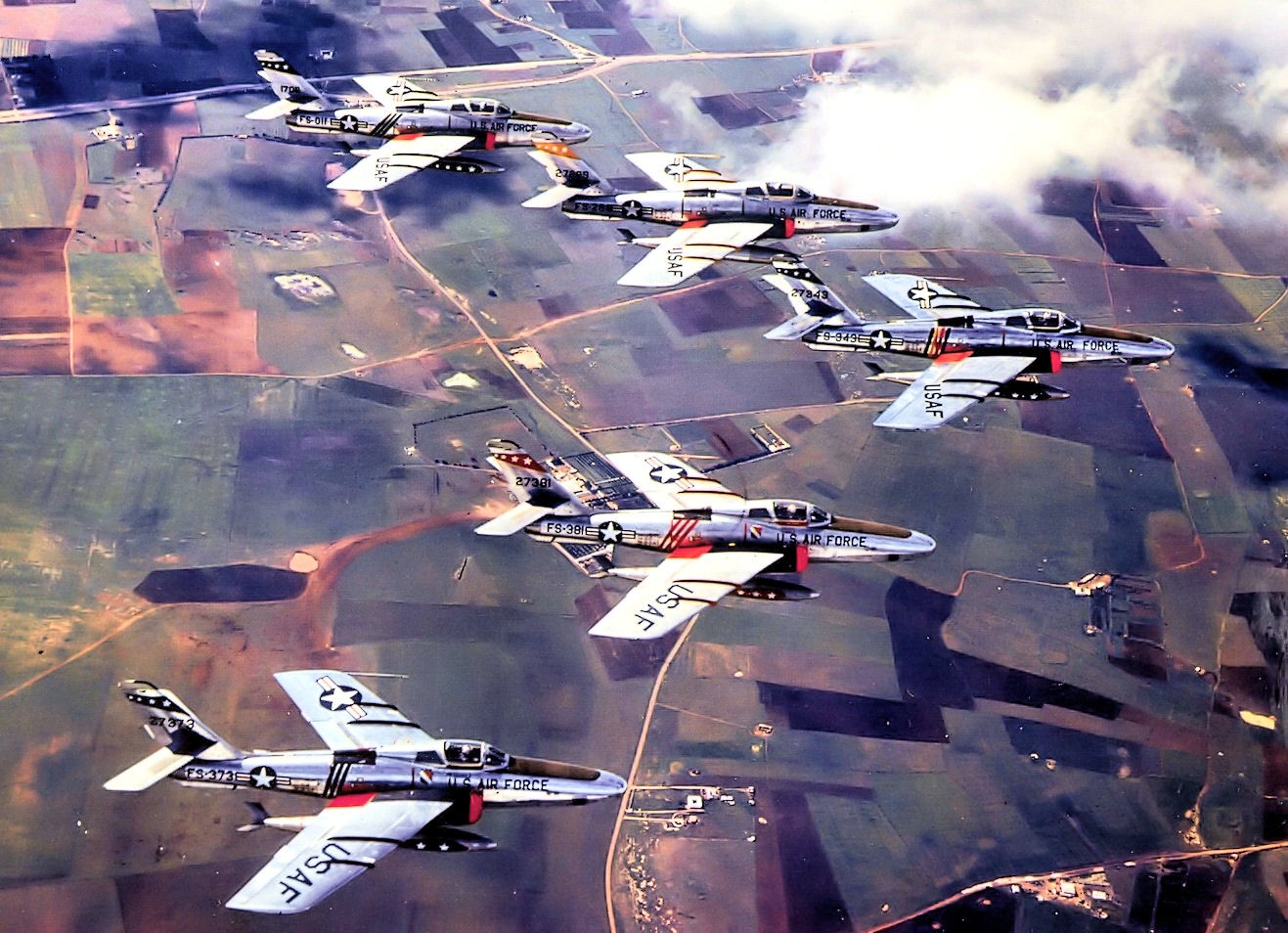 Below; Thunderstreak 52-7349 which 1st Lt Evans bailed out of and was killed, shortly after take-off from Nouasseur, Morocco, 21 August 1958. Photo from Forgotten Jets

First Lieutenant Evans was buried at Pulaski, Tennessee with USAF personnel from Sewart Air Base attending on 3 September 1958.

Below; Photo of the grave marker 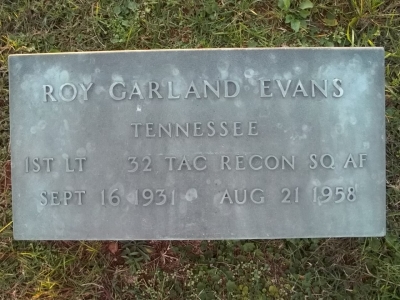