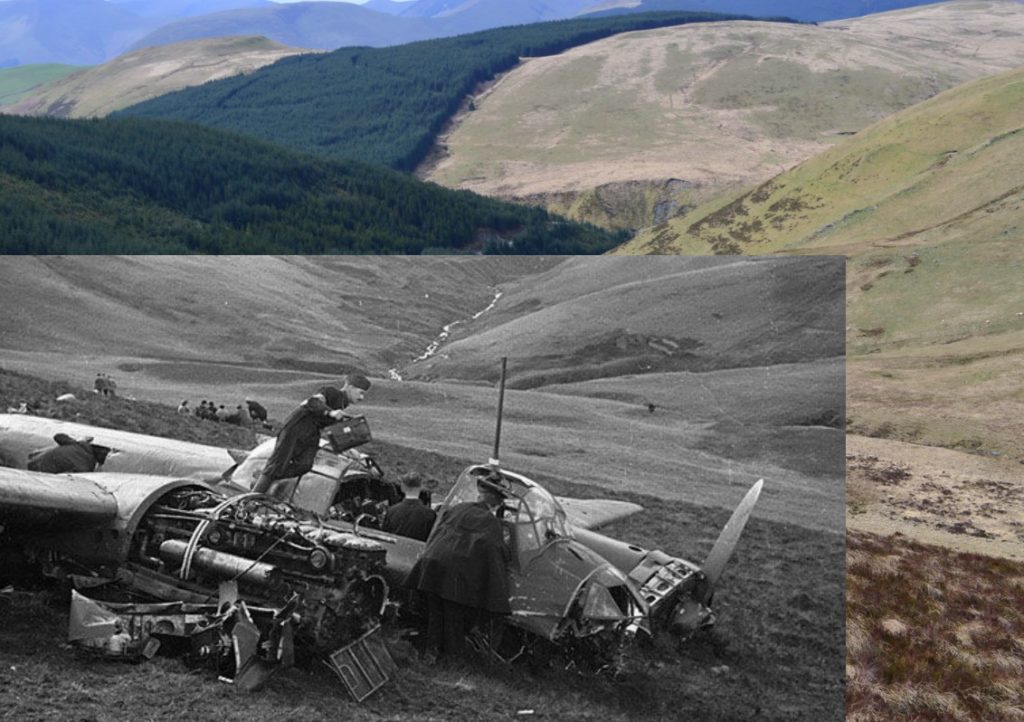 Various sources give the location of this crash site as being at Hafotyâ€™r Bwlch or Afon Clywedog but the location is approximately at grid reference SH 9235 1618. I can’t be sure I found the precise spot as trying to line up the photos as viewed on an iphone in bright sunlight wasnâ€™t easy. But someone with more time and printed copies might be able to nail the exact crash site and the above grid ref will be a good starting point.

The pilot of the German aircraft, Ltn BÃ¶hle said later, â€œI heard a cry on the intercom, â€œSpitfire! Spifire!â€ and turned the Junkers to escape into the clouds. In this moment we got a heavy blow and the port motor was shot out of actionâ€¦â€

Sgt Pilkington had opened fire from a range of 450 yards, closing to 100 yards. His shots hit the Ju88â€™s fuselage as well as the port engine. Fw Kobold returned fire, hitting the Spitfireâ€™s port wing. Sgt Pilkingtonâ€™s last view of the Luftwaffe aircraft was of it streaming smoke from the damaged engine as the aircraft dived for cloud cover at 5,000 feet.

Ltn BÃ¶hle continued; â€œIt was very difficult to hold the aircraft with only the force of one engine. Expecting soon a landing, I ordered to let out all the fuelâ€¦ All this happened in seconds.â€ Losing altitude all the time, and descending blind through thick cloud, the pilot â€œsaw a little bit of ground, clouds all round, no space for landing.â€

The starboard wing struck the top of a hill called Drum Ddu and the aircraft pancake crashed on the side of the hill, whereupon the pilot was knocked unconscious. Fortunately (and possibly because of the pilotâ€™s instruction to empty the fuel tanks) there was no fire. Even so, this was a rare event, the crews of aircraft which crash on high ground having descended through cloud rarely survive.

Obltn Kauter, himself injured from the crash, as were all the crew, managed to inflate the emergency life raft and then helped his comrades from the wrecked Ju88 and into it.

Although injured, the crew were all treated at Machynlleth hospital and were later transferred to PoW camps in Canada. In 1985, Hans Kauter returned to the scene of his ordeal.

Sgt Pilkington however, did not survive the war. Just a year later on September 20 1941, and by then promoted to Flight Lieutenant, Lionel Pilkington was shot down and killed by Messerschmitt Bf109s over Hazebrouk, France. He had been due to marry his fiancÃ©e, Barbara Walker just 6 days hence.

Below; the scene looking east. The most obvious changes are the Forestry Commission plantations and the absence of a German bomber on the side of the hill.