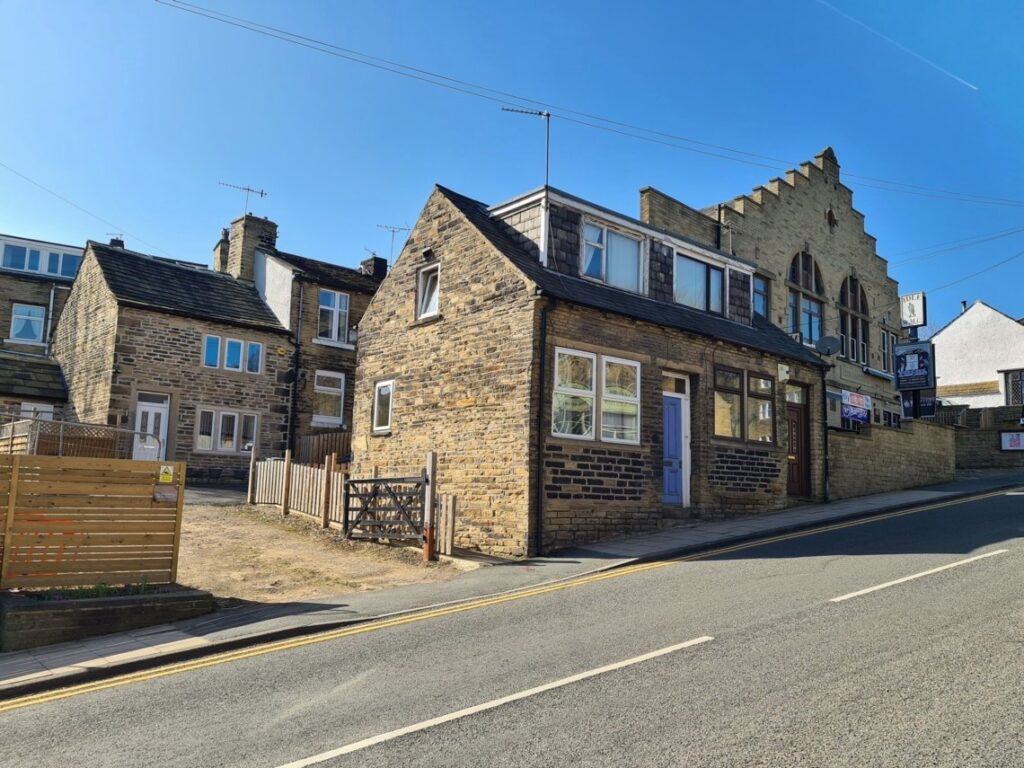 The photo above shows on the left the gap in the houses along the High Street at Idle, Bradford, where the Luftwaffe bomber crashed. Beyond is the ‘Idle Working Men’s Club’.

05 May 1941. Junkers 88A-5 Wn 0656 M2+DK of Küstenfliegergruppe 2/106, was one of a number of Luftwaffe bombers flying from occupied Europe to bomb Belfast docks. This Ju-88 was flying out of Schipol, Amsterdam and the flight plan took them across Yorkshire.

Below: How this aircraft would probably have looked. The red letter D on the fuselage code is for the particular aircraft, the colour red showing the Gruppe colour (II Gruppe) 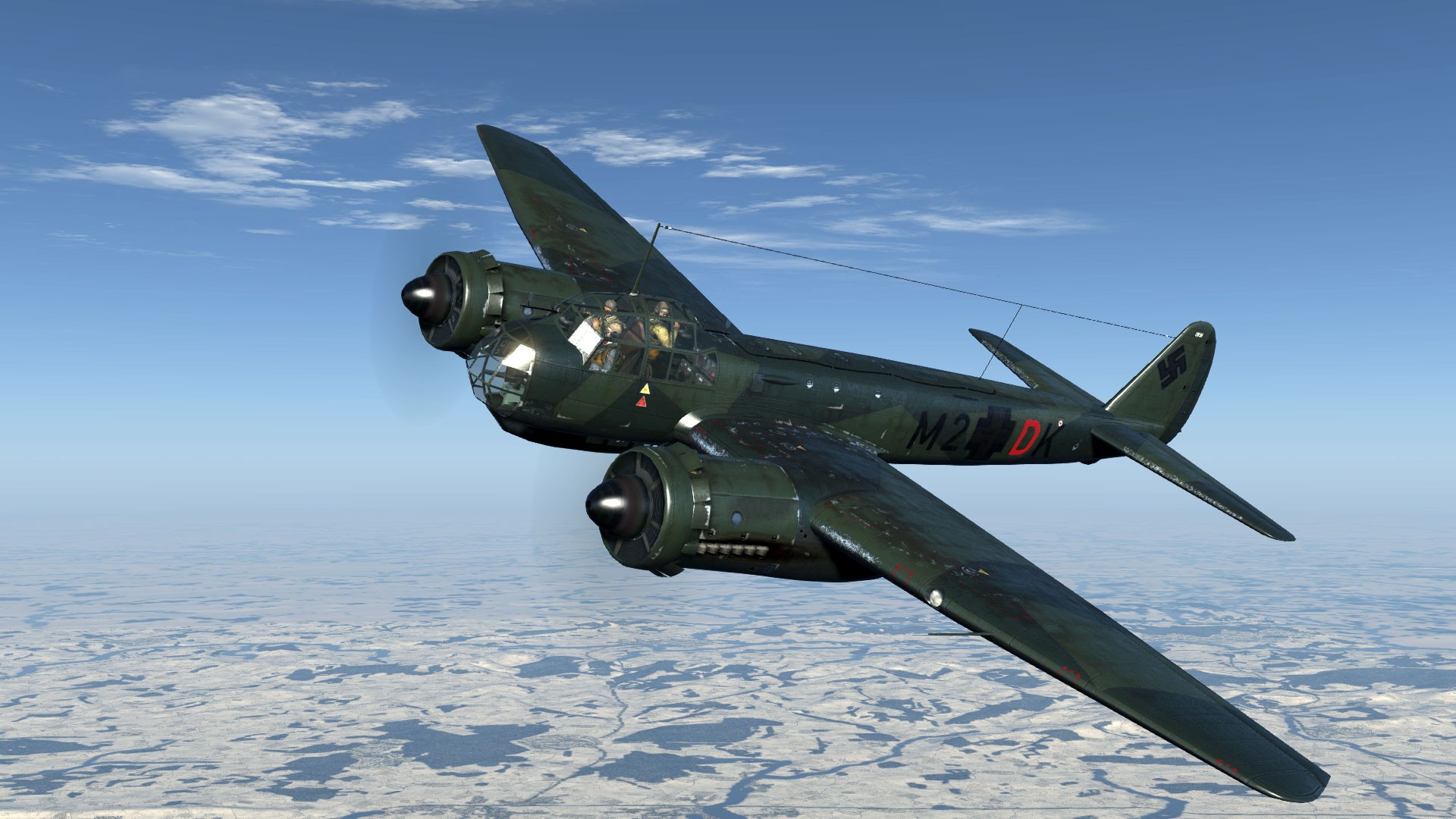 The Luftwaffe bomber was shot down at around 0045 by a 25 Squadron night-fighter, Beaufighter R2156 crewed by Sergeant Ken Hollowell and Sergeant Richard Crossman.

Below: A Beaufighter of 25 Squadron. 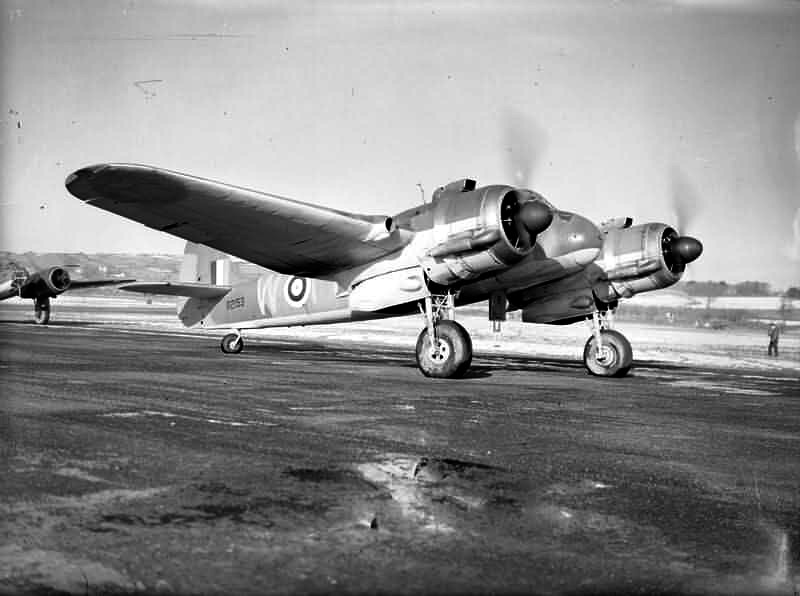 According to Reinhard Metzger, (cited in Norman, 2001) who was the Beobachter (observer), “…the right wing was hit and the sheet metal was gone. There was fire around the motor. In the last stage, Jänichen and Beeck went out by parachute to reduce the weight.”

He and the pilot remained, throwing out the machine guns and ammunition in an attempt to lighten the load and get the Ju88 to France. “The plane stopped spinning after equipment (and the bomb load) was jettisoned and Jürgens restored control.”

But then Metzger saw other night-fighters attacking them from above and below. He hoped the armour plating would shield him from the bullets but with the aircraft on fire and clearly doomed, there was no option but to bale out, if they could. Metzger added, “Because of the centrifugal force I was stuck to the right-hand side of the plane and I had to hold the steer on the left side so that Jürgens could get out of his seat. I wonder now that we did it without panic: at that time we had stronger nerves.”

One report says the attack happened over Harrogate but also adds that the Ju88 was finished off by an AA battery in the “Leeds Bradford area” which doesn’t sound likely reading Metzger’s account.

All the crew baled out, parachuted down safely and were taken prisoner, initially refusing to provide any information to their interrogators.

The destroyed Ju88A-5 however fell on the village of Idle, near Bradford, coming down on a woodyard belonging to a Mr John Barker in Jasper Street and the houses at 9 – 15 High Street were badly damaged or destroyed.

John served in the Home Guard and was married to Sarah and lived at number 9. He survived his wife by 6 weeks, but died of his injuries at St Lukes Hospital, Bradford. Their 20 month old son, Garth, was severely burned in the crash, but survived. Herbert Jowett lived at number 15.

At least 5 Luftwaffe aircraft were lost attempting to attack Belfast that night.

Naturally the press was censored and not able to provide much of a report about the incident, and both the Telegraph & Argus and the Yorkshire Observer at the time (accessed on microfiche at Bradford library) make only vague references to it. 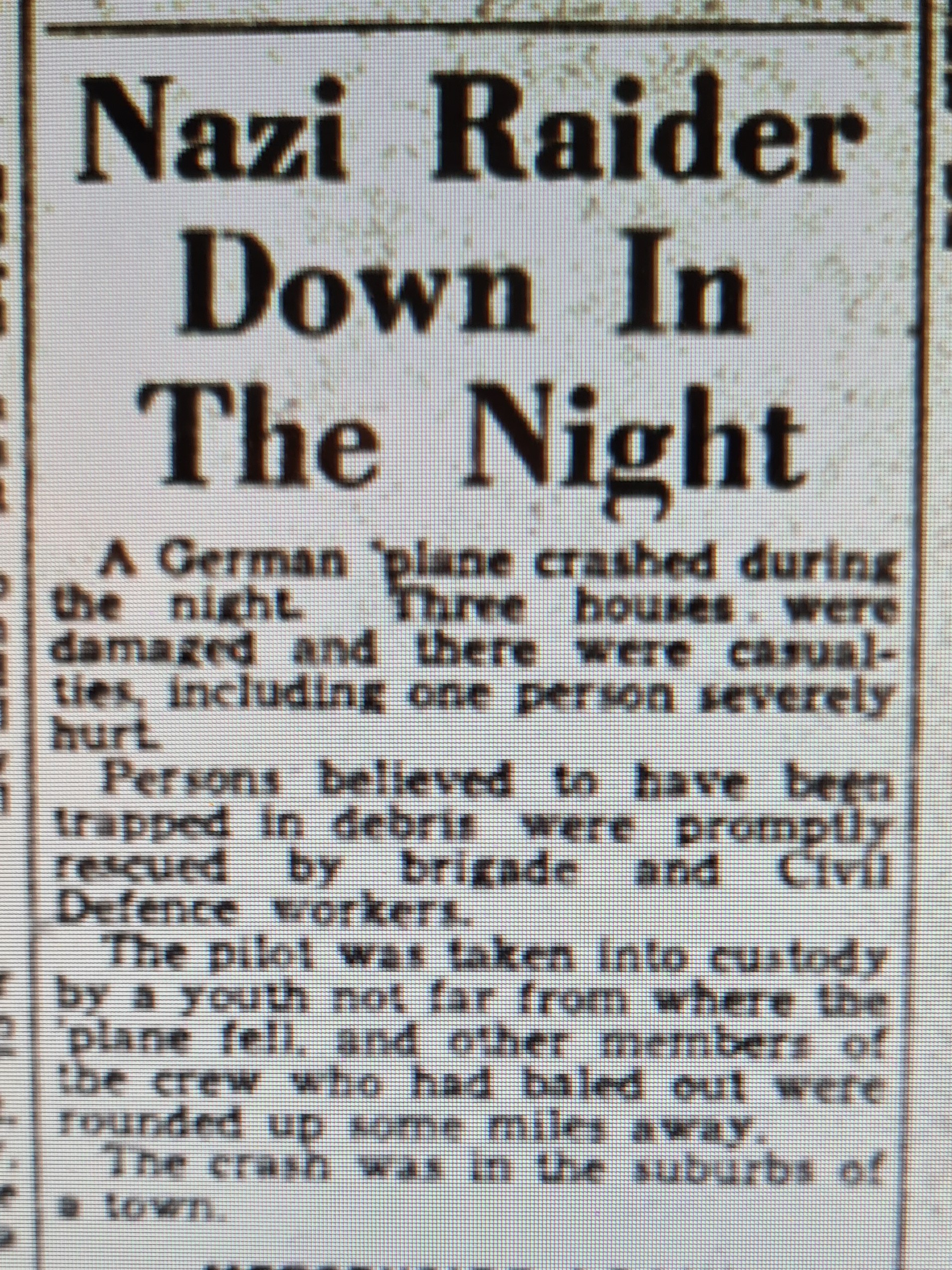 As for the crew of the Beaufighter which shot down the intruder, Alistair Goodrum in his 2005 book (see below) says Sergeants Hollowell and Crossman “…had flown together regularly in 25 Squadron since November 1940, and become an effective team with several successful interceptions to their credit.”

Less than two weeks after shooting down this Ju88, and again in Beaufighter R2156, they were patrolling The Wash whereupon they spotted and attacked a Heinkel He-111. Sgt Hollowell’s guns repeatedly jammed however, giving the Luftwaffe crew the opportunity to shoot back. The Luftwaffe bomber was reportedly forced down (though it is difficult to confirm this) but either way, the Beaufighter was too badly damaged and at 1,000 feet Sgt Crossman baled out. Sgt Hollowell realised he was too low to bale and so managed to crash land the Beaufighter at Stiffkey, Norfolk, but I understand the aircraft was written off.

Flight Sergeant (as he was then) Richard Crossman was killed just a couple of months later on 08 July 1941 in Beaufighter T4629 over Cambridgeshire. Ken Hollowell survived the war and died 14 February 2007.

The incident seems reasonably well remembered in Idle; when talking with the locals, most seemed to know of it and where it happened. By coincidence, one person I spoke with happened to be the great grandson of the owner of the woodyard. He said something which is often reported – that one of the engines from the Ju88 remains buried under the site.

The site was not developed and the only ‘memorial’ is the gap in the houses on High Street. The Bradford Telegraph and Argus of 02 May 2005 mentioned plans for a memorial plaque to the dead being placed at the site, but when I visited in March 2022, there was no sight of any such memorial and no-one knew of it, including the land owner. There really should be a memorial to the four people killed in this tragedy. There is a bench with a litter bin next to it, which doesn’t seem very dignified. I don’t know if the bench was a memorial but could see nothing on it to suggest that.

Below: the bench at the crash site. 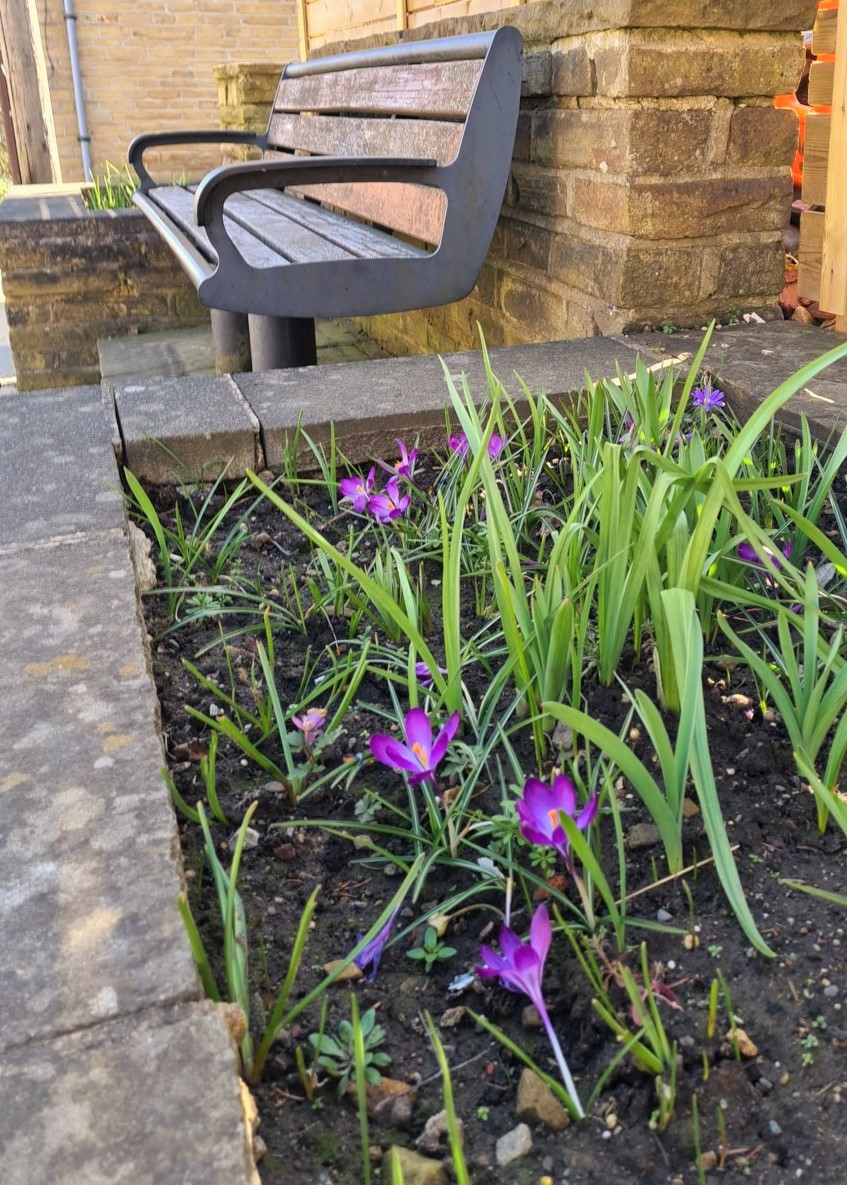 There had been speculation that if ever the land was developed, the engine may be unearthed. This is happening now, there are new buildings being put up on the site.

These images are from the Bradford Telegraph & Argus and the Yorkshire Observer, accessed at Bradford library on microfiche. 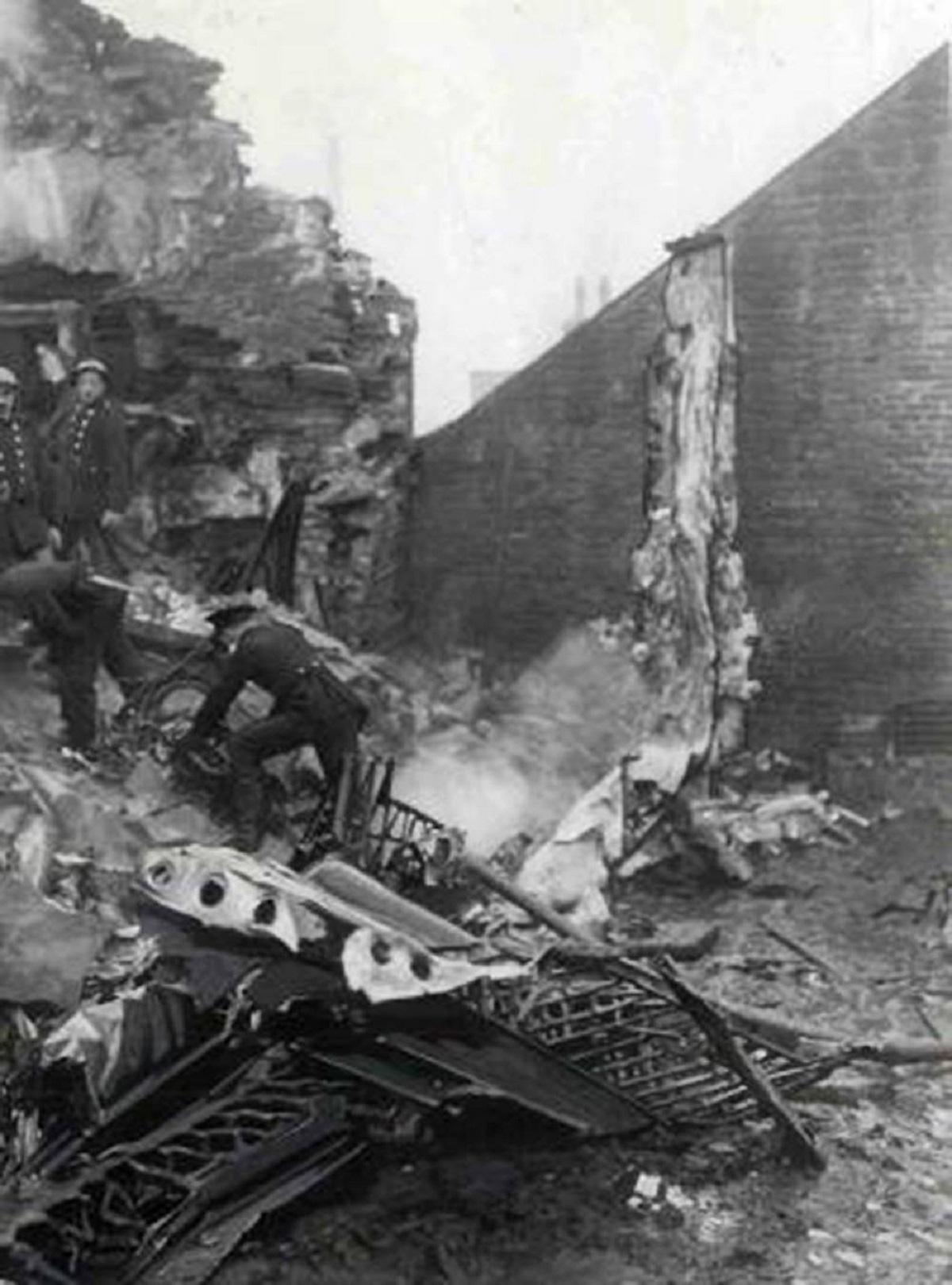 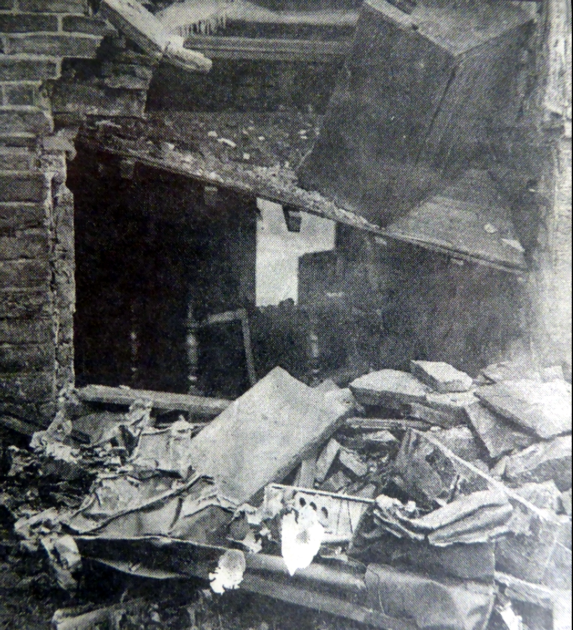 This image of the scene the morning after was taken (I think) from Louisa Street, Idle. 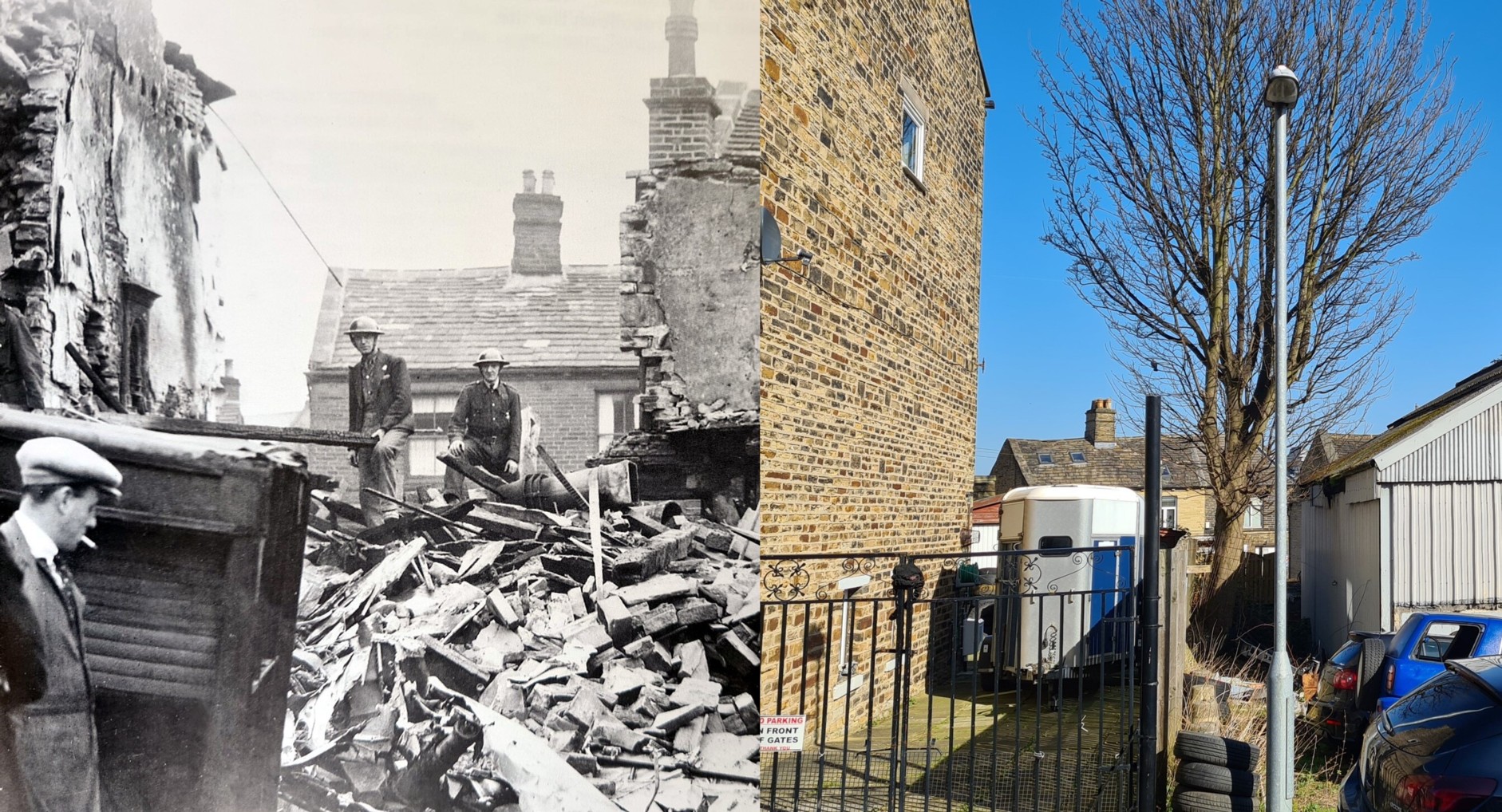 See on google maps. The gap in the houses where the bomber crashed is clear.

Below: photo of a Ju88 I took at the RAF Museum, Hendon 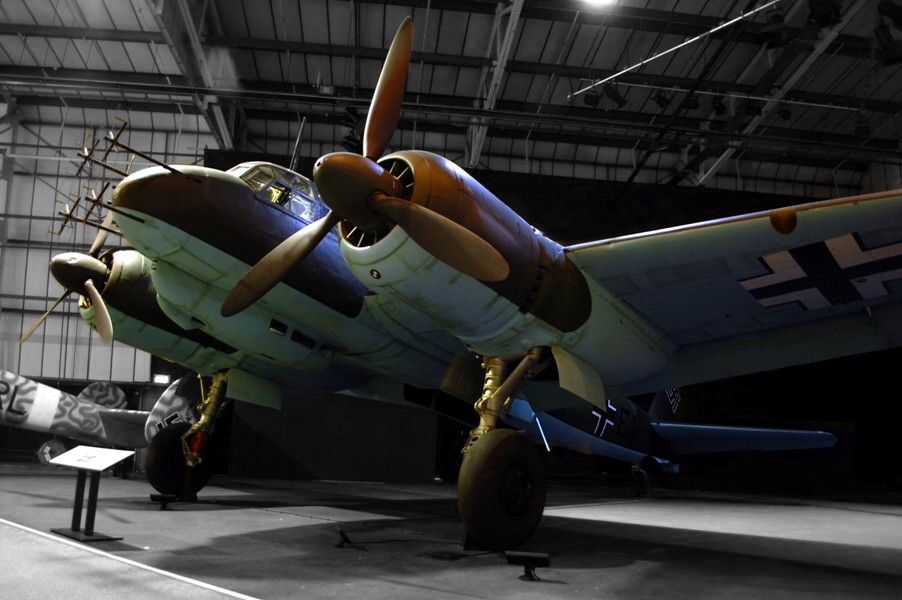 Below: this Faithful Service Medal was found at the crash site and is now at Idle library. 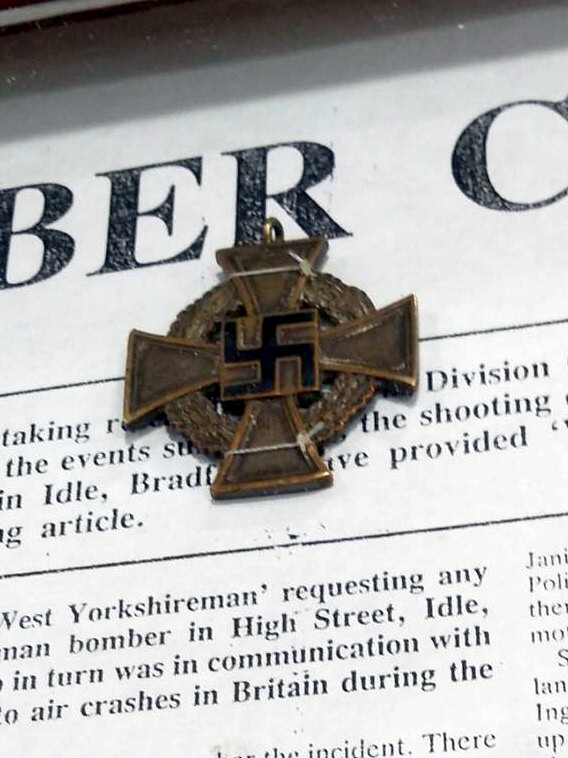 Below: Grave of Mr and Mrs Boyd at Idle churchyard. Image from Bradford Telegraph & Argus. 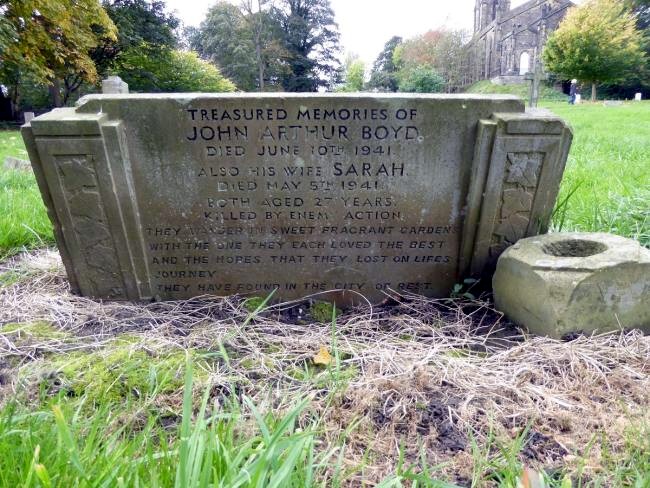