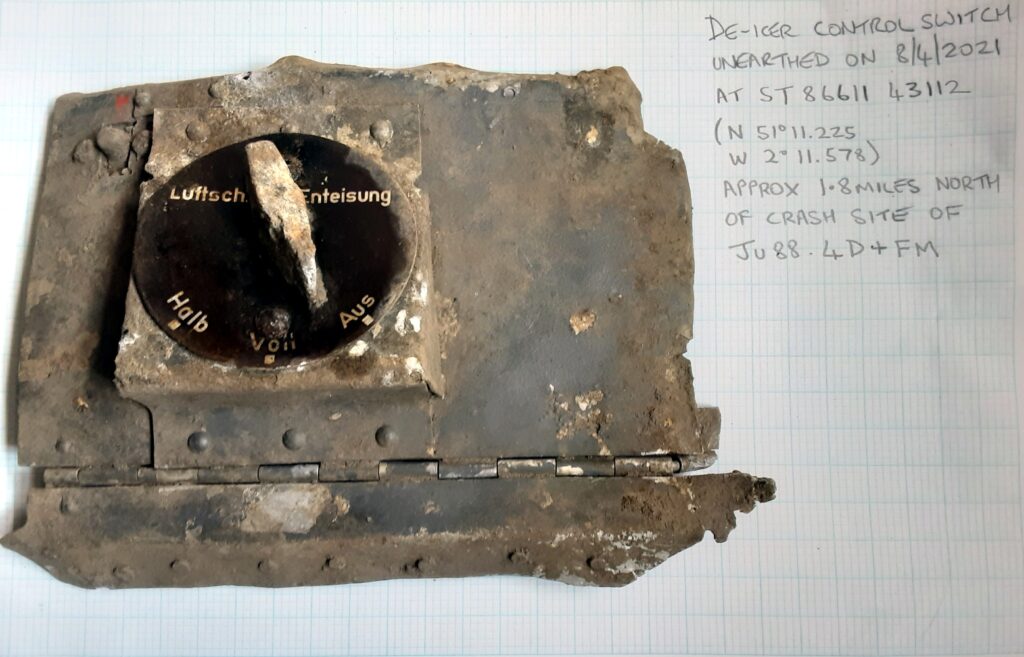 This page is added on the 77th anniversary of the crash in which Helmut Trauwald, who just a few weeks earlier would have celebrated his 21st birthday, was killed.

I was recently contacted by Dr Alan Greenwood who had found, beneath a hedgerow near his home in a village south of Warminster, a control switch with German words on it. He says he noticed a “sharp metallic shard sticking out of the ground” and, concerned their dog might cut his paw on it, Dr Greenwood unearthed it. It was a switch from a Junkers Ju88 for hot air de-icing of the propellers. ‘Luftschraube enteisung’ means air screw de-icer and the control has settings for half – full – off. Dr Greenwood wondered if I knew of a Luftwaffe crash in the area, but internet searches had provided nothing in that village.

Below Another photo of the de-icing control taken by Dr Greenwood after he found it in April 2021. 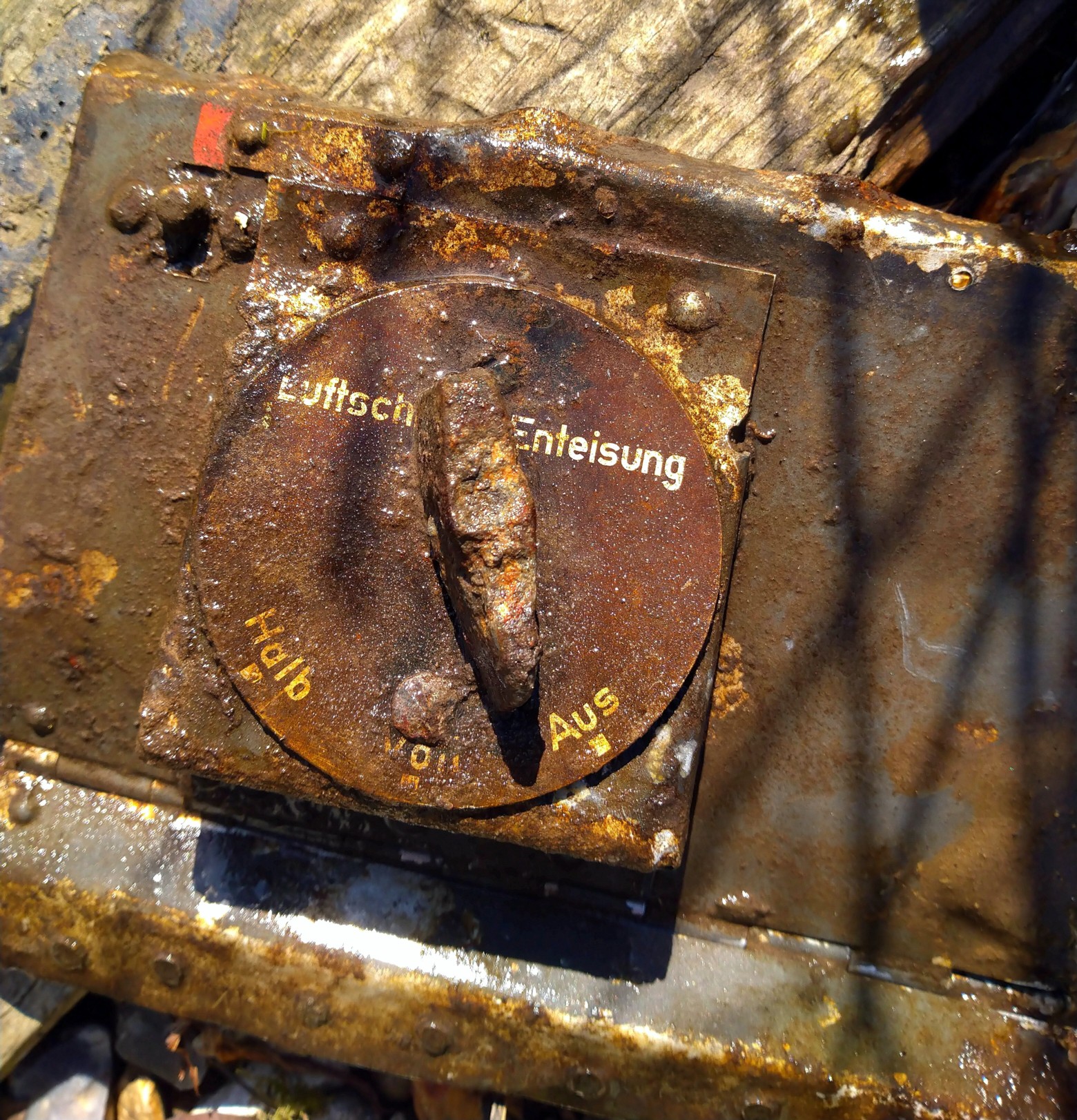 Trawling through the 12 volumes of Nigel Parker’s Luftwaffe Crash Archive, the nearest one appeared to be at Hill Deverill, but this item was found nearly 3km from there. It was possible the item had been blasted that distance if the aircraft had exploded on impact, though I thought it more likely it had been picked up as a souvenir by someone and then dropped at some point since.

However, using a webpage called Wayback Machine, I was able to recover some old webpages put up in 2004 by a Mr Dave White who undertook a considerable amount of research which – along with material on the website Aircrew Remembrance Society and Volume 11 of Nigel Parker’s Luftwaffe Crash Archive series – provides the basis for this write-up.

The reason the control switch ended up so far from the crash site was because the Luftwaffe aircraft was attacked by an RAF night fighter and blew up in mid-air, scattering debris over a wide area. It is reasonable to assume fragments of debris will still be found in the area.

The destroyed aircraft came down at a place called Manor Farm at Hill Deverill. Dr Greenwood advises it stopped functioning as a farm in the 1940s and is now a private residence. I understand the Jumo 211 engines may still be buried there? As I write, it is hoped the exact spot will be identified and this page can be updated with a photo of the site.

Below Map showing the village of Hill Deverill and the location of Manor Farm where the Ju88 came down and where the body of Uffz Trauwald was found among the wreckage. It was fortunate no-one in the village was injured. 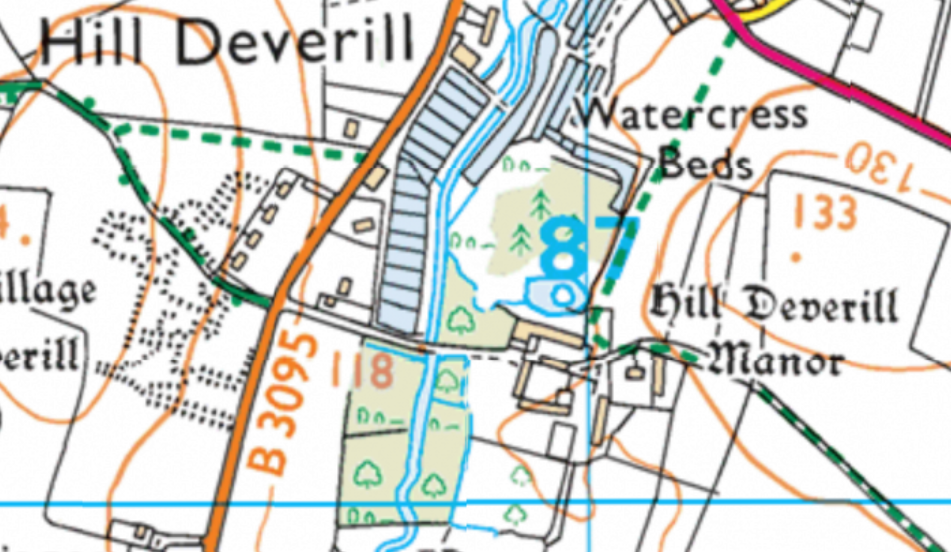 4D+FM took off from Orly, near Paris on the evening of the 23rd, the target being Bristol. The bomber force comprised some 117 bombers. While the raiders dropped their bombs across the south west of England, and even as far as south Wales, no bombs at all fell on Bristol.

Below: How this aircraft would have looked April 23 1944.

In a memoir provided by the former radio operator, Walter Kempter* and published in full in Parker (2017), he says the bombers crossed the Channel individually and not in a group. Uffz Kempter recalled crossing the south coast without difficulty and then “Suddenly and unexpectedly I felt a heavy strike and the plane was aflame. We must have been hit by a night fighter. For such an event there is, as you probably can imagine, no time for talking. Without hesitation I unlocked the emergency exit and jumped out… Once clear of the aircraft I counted 21 – 30 seconds before I opened my parachute. I had to be clear of the burning plane.”

Uffz Kempter was not aware of the others bailing out behind him.

The Ju88 had been attacked at 0210 on the morning of the 24th by Mosquito HK355 of 125 Squadron, which was crewed by pilot Sqn Ldr Eric G Barwell and navigator/wireless op Flt Lt David Haigh.

There are differences in the accounts given by Uffz Kempter and Sqn Ldr Barwell, the former saying the attack was sudden and unexpected, the latter saying the Ju88 took “corkscrew evasive action.”

In an account provided by Mr White, Sqn Ldr Barwell attacked from a range of 200 feet; “…a short burst was given from almost dead astern and strikes were seen on starboard wing root and engine.”

The RAF pilot mentioned there being some off-target return fire, presumably the shots were fired by Uffz Trauwald moments before his death.

“The aircraft went down to starboard almost vertically and was then observed spinning with starboard engine on fire and pieces ablaze falling from it. A glow was seen on the ground where the aircraft hit,” he said.

As he dropped through the night sky, Uffz Kempter was alarmed when he looked up and saw his parachute was damaged, with two tears in the canopy, but he was able to land without injury and spent the night under a haystack. He gave himself up to civilians at noon (location unknown) on the 24th and was taken to the local police officer.

The destroyed aircraft fell at Manor Farm as described, its payload still on board. This comprised 2 x AB 500** cluster bombs (AB stands for Abwurfbehälter, the bomb was a huge container carrying incendiaries) and ten 50kg incendiary bombs. Dr Greenwood advises some years ago an incendiary bomb was found on his property, removed of course by bomb disposal.

The other two crew members to survive, albeit with injuries, came down within a few miles of the crash site. Walter Kempter says in his memoir that upon being taken prisoner, a man in civilian clothing at the police station (he suspected it was Warminster) and speaking perfect German replied to his query about the fate of his comrades, saying “Well, we have found the rifle-man dead. He had been hit by the night-fighter into the neck. The other two have broken legs, we have brought them into a hospital…” Given the description of the two other survivors is accurate, that is probably true of Uffz Trauwald too.

Below Photo of Helmut Trauwald’s grave at Haycombe Cemetery, Bath, taken by Dr Greenwood when he visited today, 24 April 2021, the anniversary of the airman’s death. 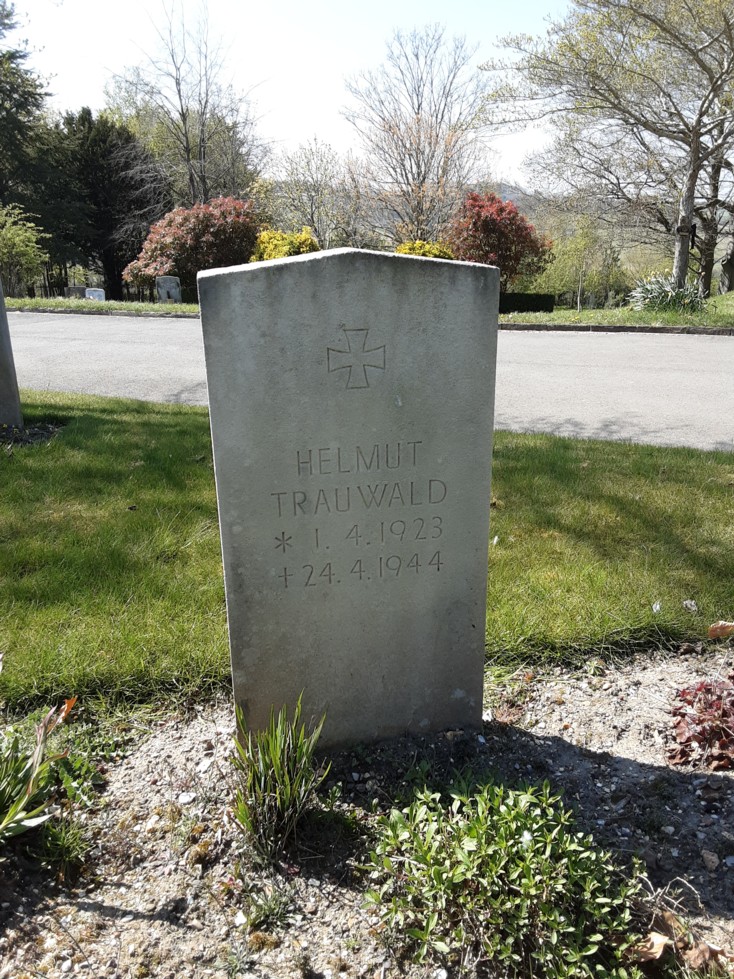 Below These four images are from Aircrew Remembrance Society (please see photo credits and references further below).
The first shows Uffz Rudolf Detering at the helm of 4D+FM. 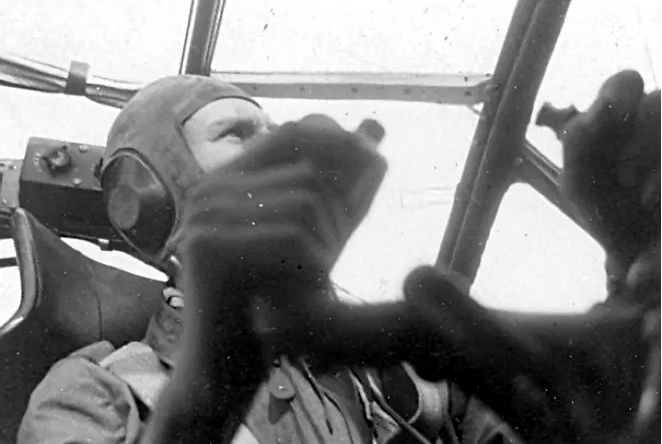 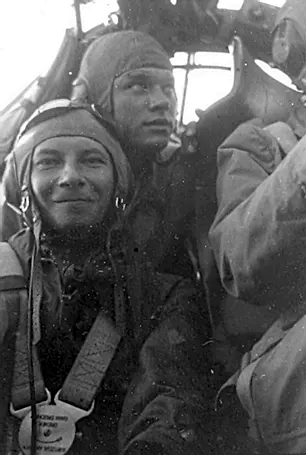 And this photo shows (L-R) Detering, Trauwald and Agten with a previous crew member, replaced by Uffz Kempter. Parker notes this photo was probably taken in the Med. 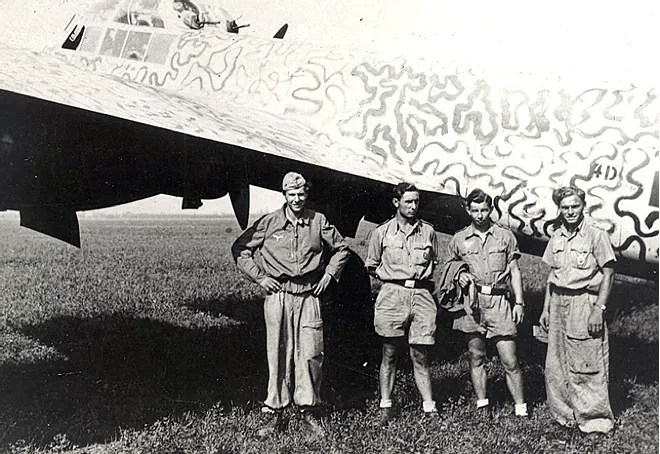 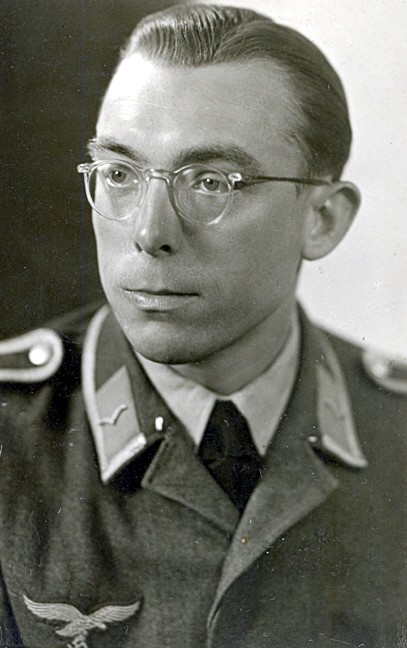 About the switch found by Dr Greenwood
Below This image, from a Russian forum, shows the Luftschraube enteisung control switch beneath the dials. Note the layout of the control panel fits more closely with Dr Greenwood’s find than with the detail from the Ju88 cockpit control panel (black and white image) further below. Presumably a different variant, 4D+FM being a Ju88A-14 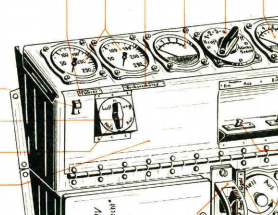 Close up of the lead photo taken by Dr Greenwood, provided here to compare with the diagram. 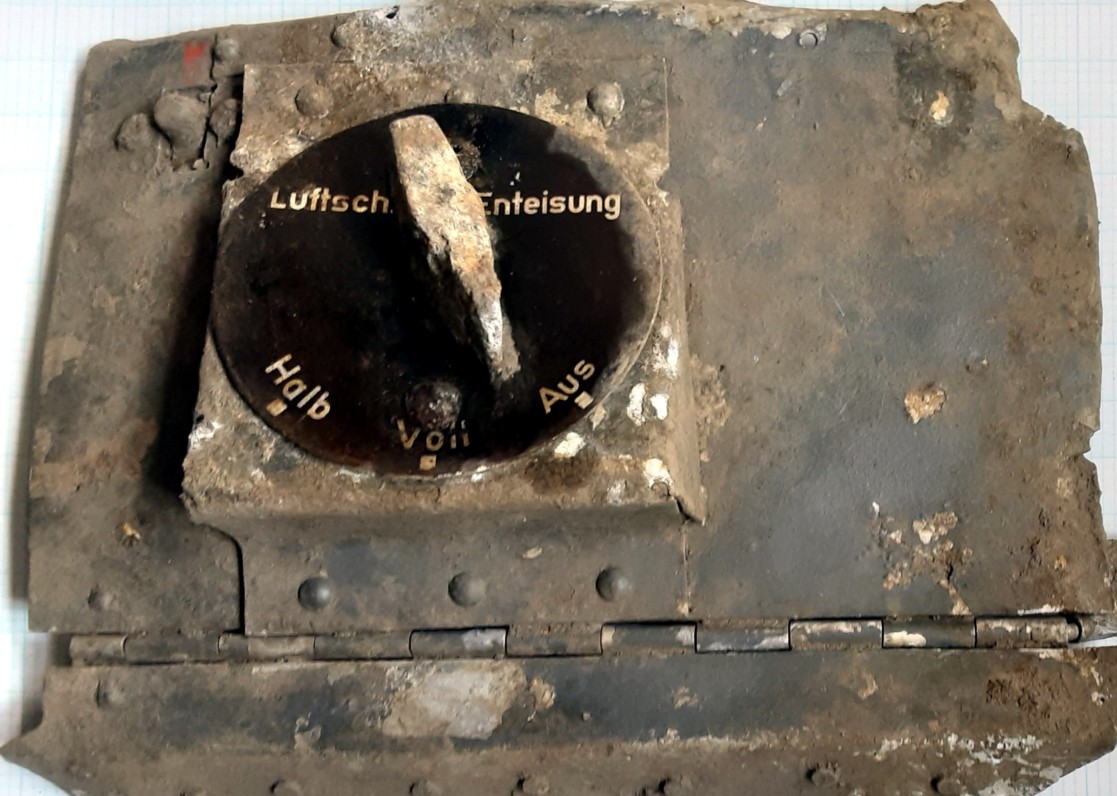 In this photo, the de-icing control is in the centre of the image. 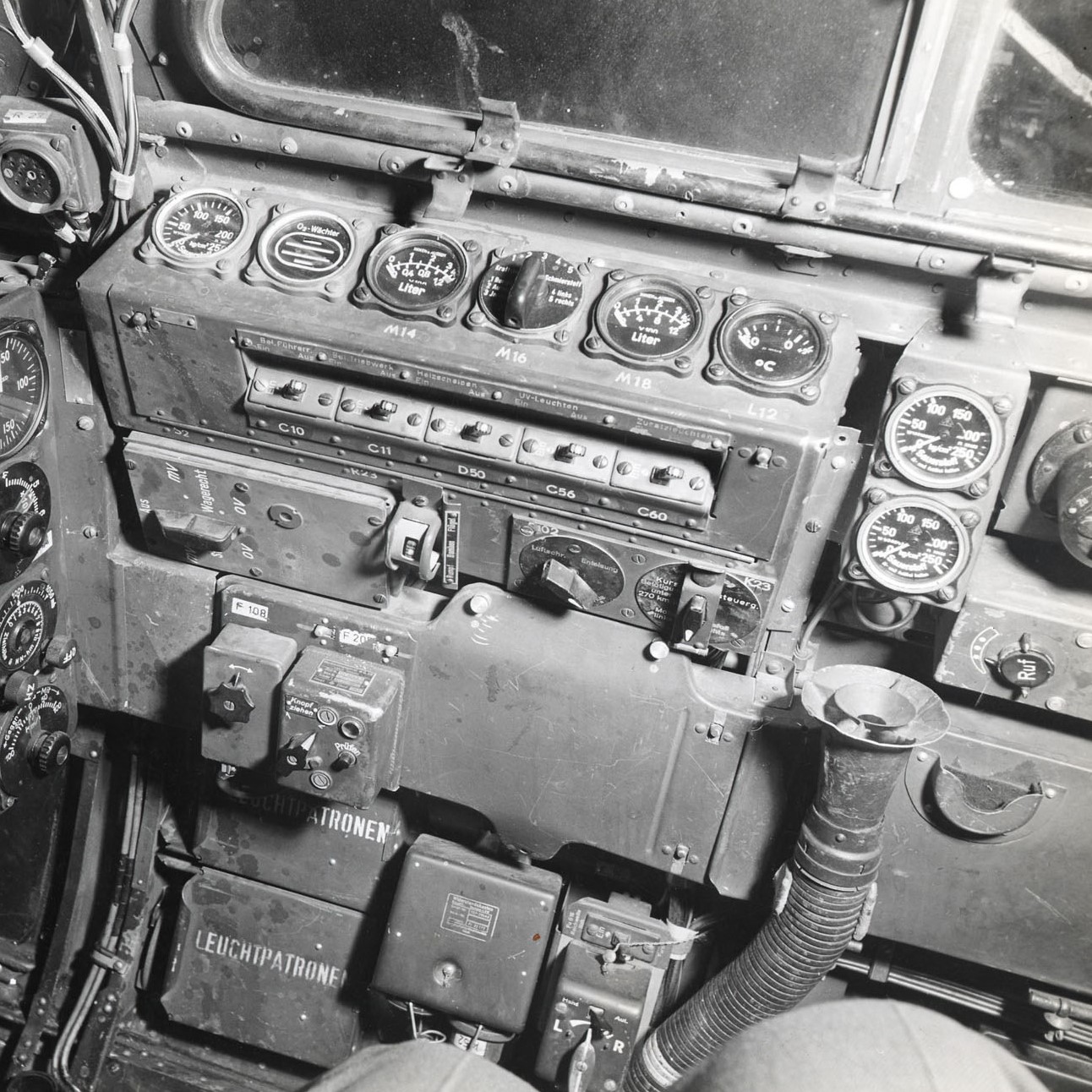 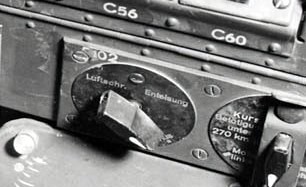 This simulated image shows the cockpit of a Ju88A; the deicing control can just be seen in the bottom right corner of the image. 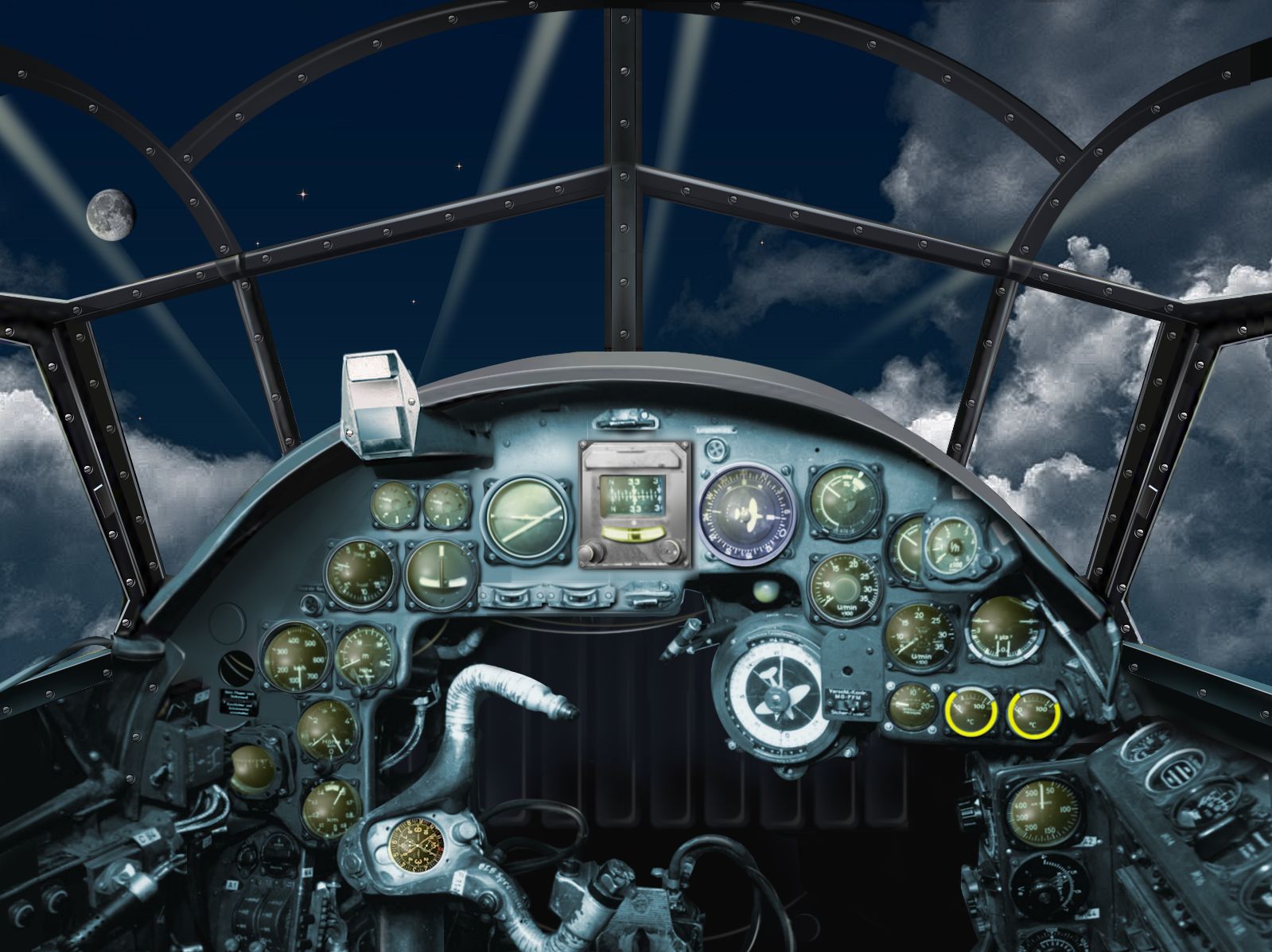 *’Kempter’ is sometimes given as ‘Kempner’. In Parker Vol 11, both spellings are used. In Parker Vol 12, which includes details of all Luftwaffe personnel in the series, it is spelled Kempter and yet in the corrections note for Vol 11 in the same book, Parker says “For Kempter read Kempner” (!)
I have gone with the spelling as given by Melvin Brownless and Mike Croft of Aircrew Remembrance Society who met with Walter Kempter and his wife Lore in 1992.

The two photos of the de-icing control and the photo of Helmut Trauwald’s grave are courtesy of Dr Alan Greenwood and are used with his kind permission.

The photos of the crew members are from Aircrew Remembrance Society and are used here with their kind permission. Please see link below.