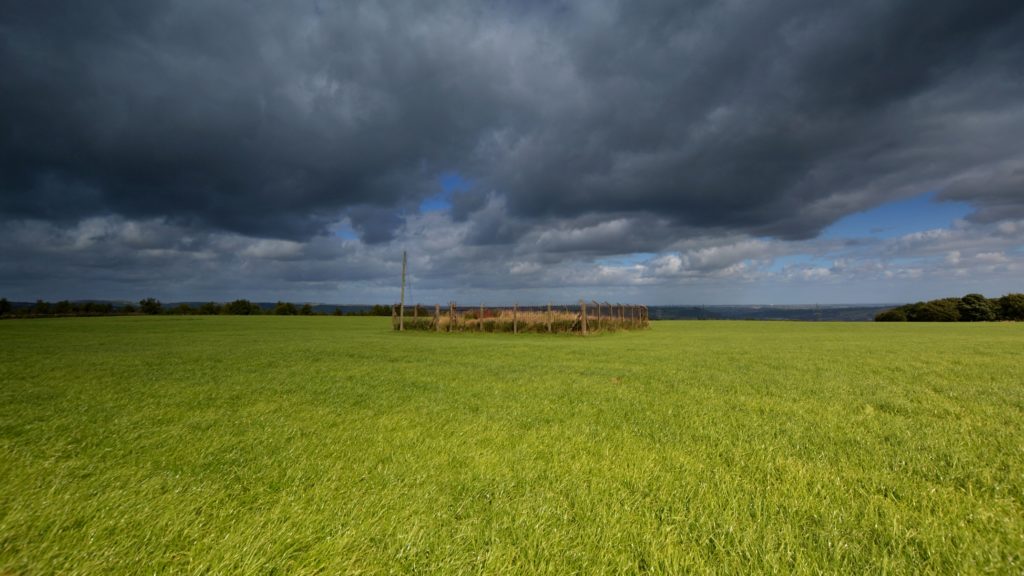 Photos taken at ROC Posts at Sowerby Bridge in West Yorkshire and a couple of others at Todmorden and Shaw in Lancashire. The photo above shows the post at Barkisland near Sowerby Bridge. It is well protected by a barbed wire fence which is unusual, but the gate and the post were open when I visited in September 2013.

The Royal Observer Corps was a branch of the RAF, its mostly civilian recruits’ role initially being to identify and report German bombers over Britain. After WWII and the start of the Cold War, advances in the technology of war made the role redundant and the ROC’s new task was primarily to detect and report radioactive fallout following a nuclear attack on Britain from a network of Underground Monitoring Posts. There were about 1,563 such bunkers located across the country.

Below; interior of the Sowerby Bridge ROC Post showing the standard layout of the posts; at the far wall are two beds. The photo was taken from the bottom of the access shaft. Just to the left of the point of view is the chemical toilet and storeroom. 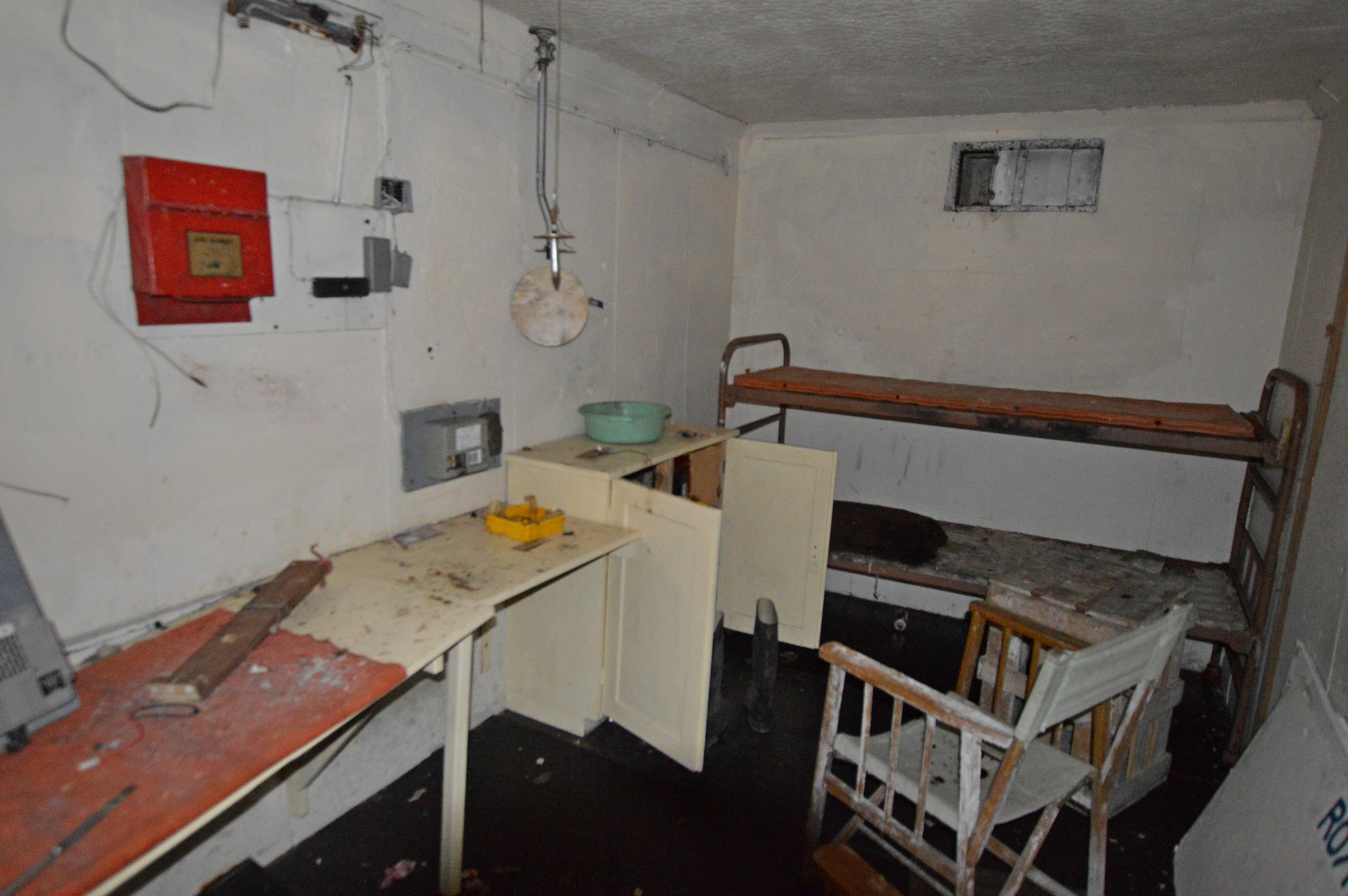 These photos are of the ROC Post at Todmorden; 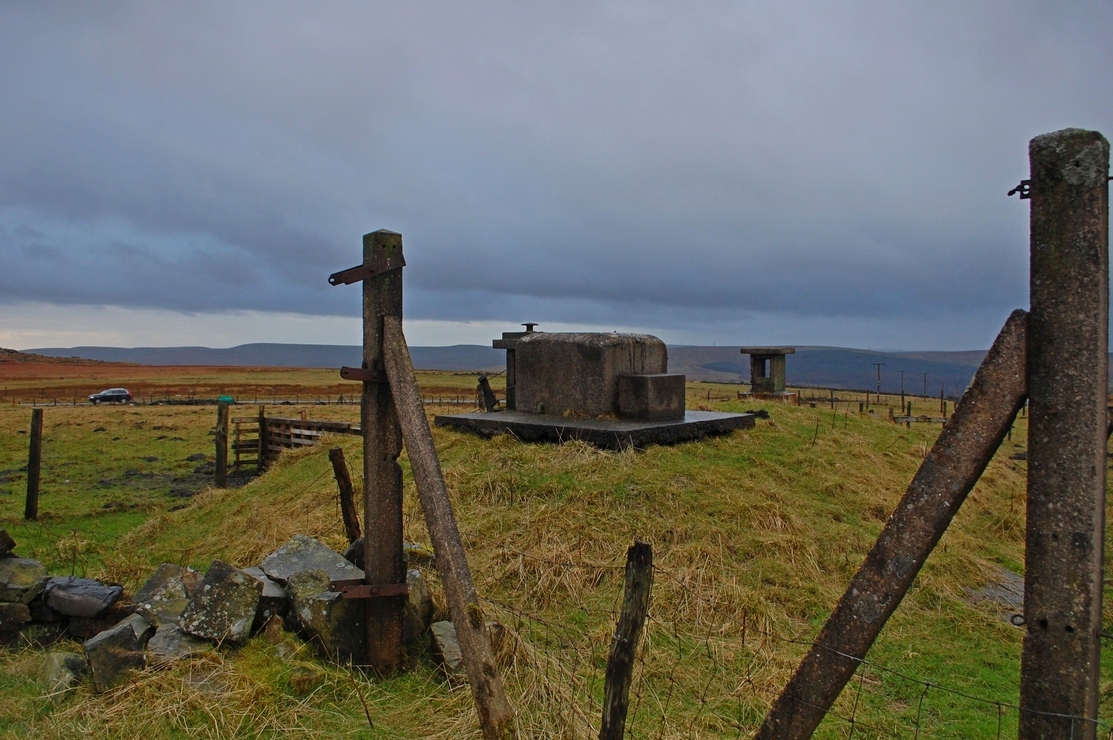 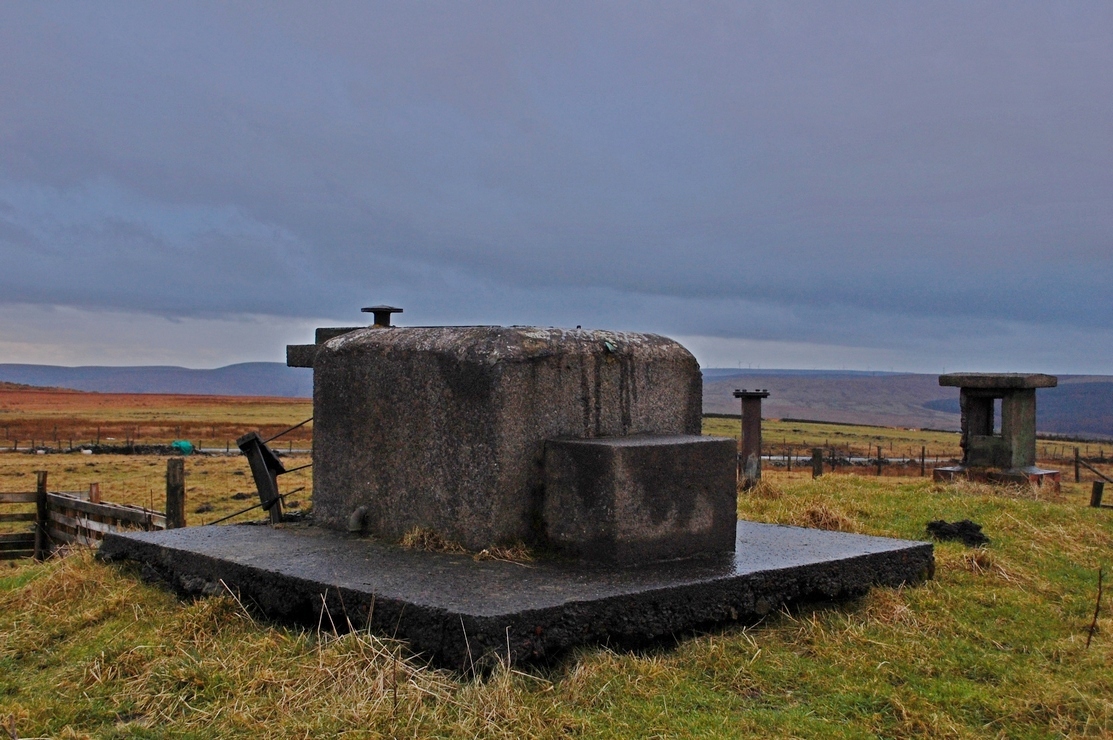 The posts are 19 by 8.5 by 7.5 ft concrete structures built underground and levelled off so that access can only be made via the hatch. Many were closed down in 1968, the rest were abandoned in 1991 after the fall of the Berlin Wall heralded the end of the Cold War.

Some have been restored, some destroyed, but many remain with traces of their thankfully never tested purpose still visible.

This is the ROC Post at Shaw. Underneath the stinging nettles and manure all that remains visible is the sealed entrance shaft (inset); 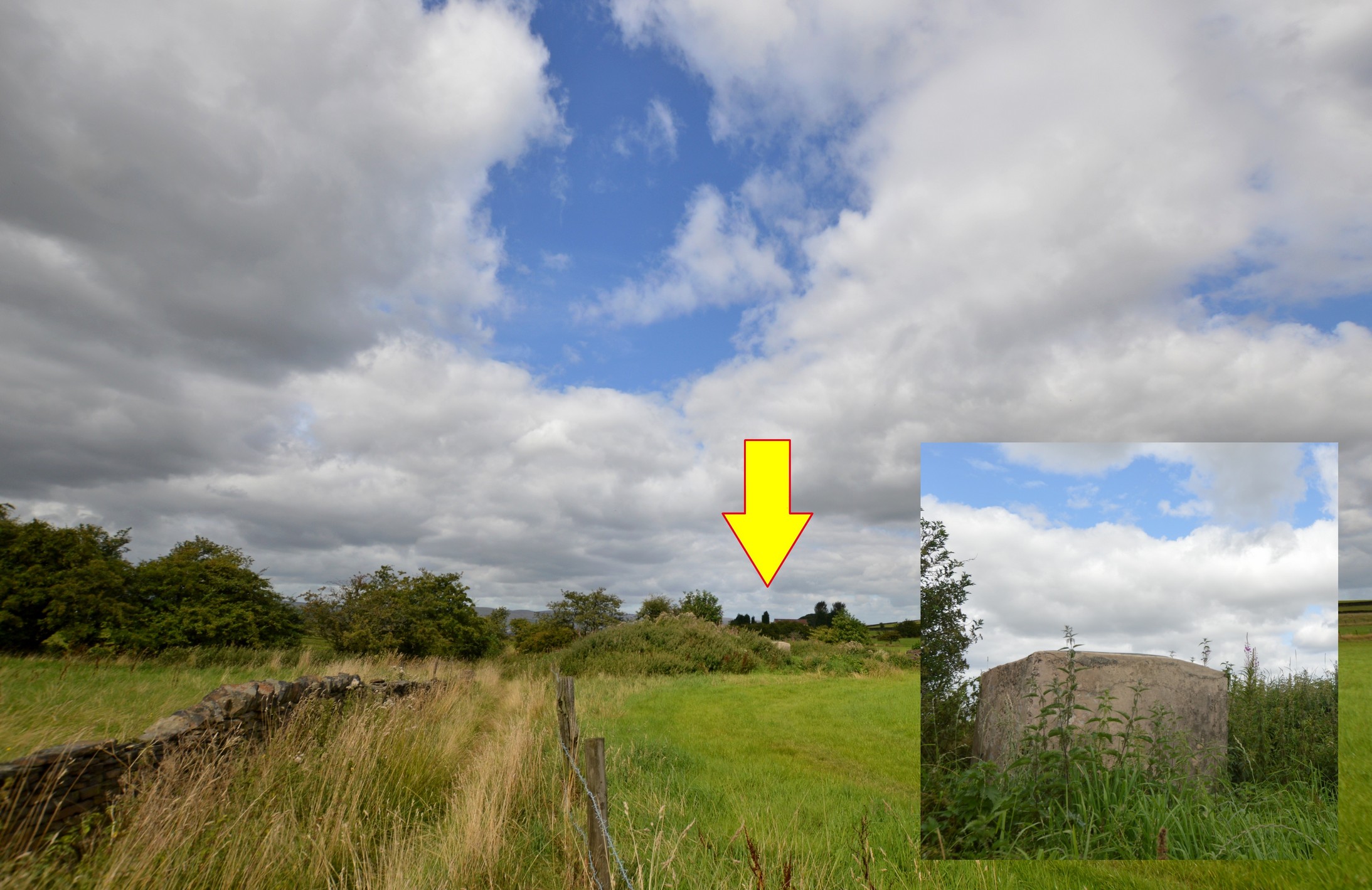 On the ground, two structures can often be seen; the entrance shaft and louvred ventilation shaft (the air would be filtered in exercises or the event of an attack) and sometimes the pipe through which a fallout detection system (FSM; Fixed Survey Meter) could be extended is visible too.

Below; The ROC Post at Sowerby Bridge. Between the access hatch and louvred vent, the pipe through which the FSM would be extended, can just be seen in this photo. 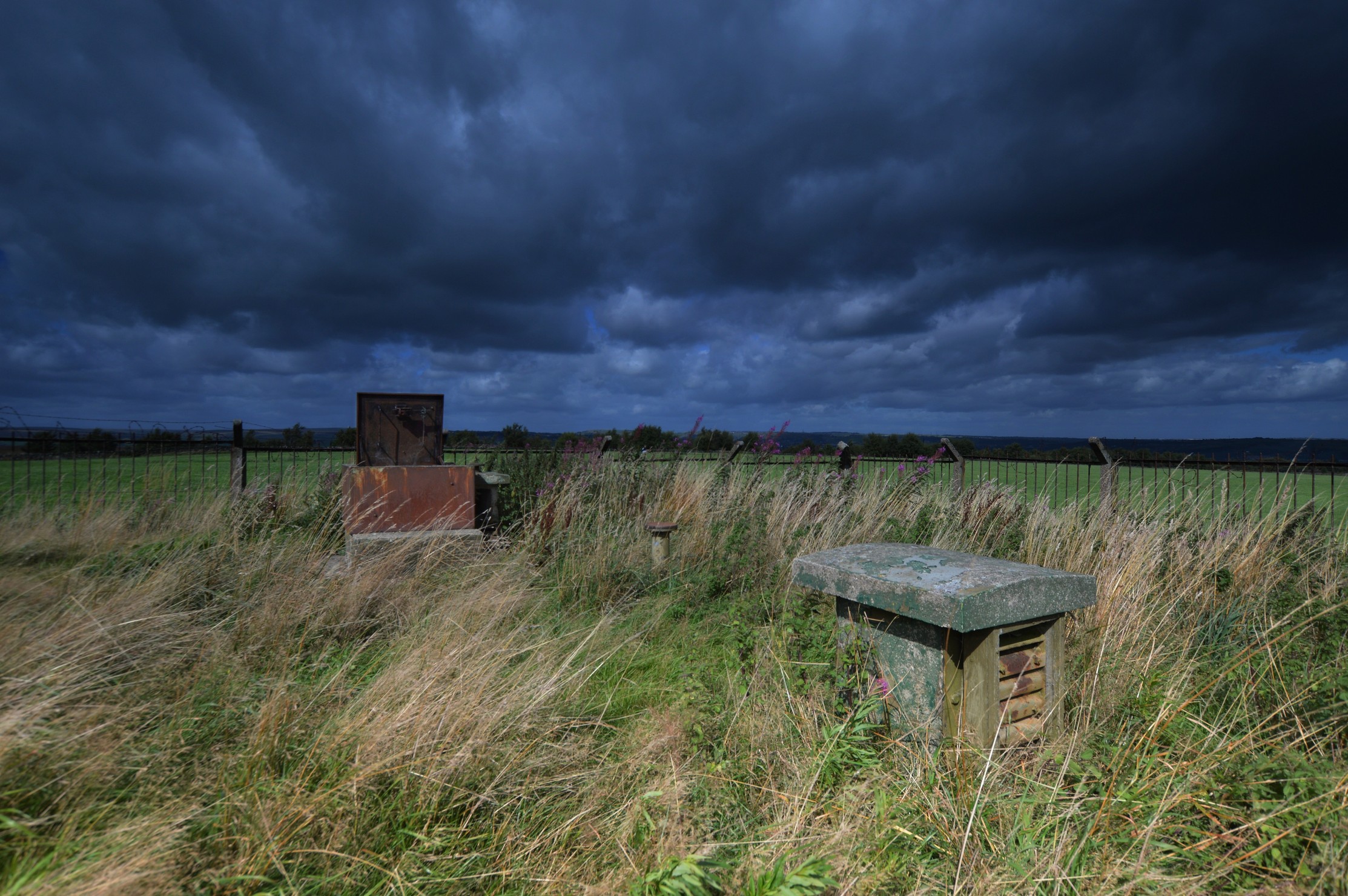 Below; Another view showing the entrance hatch open. 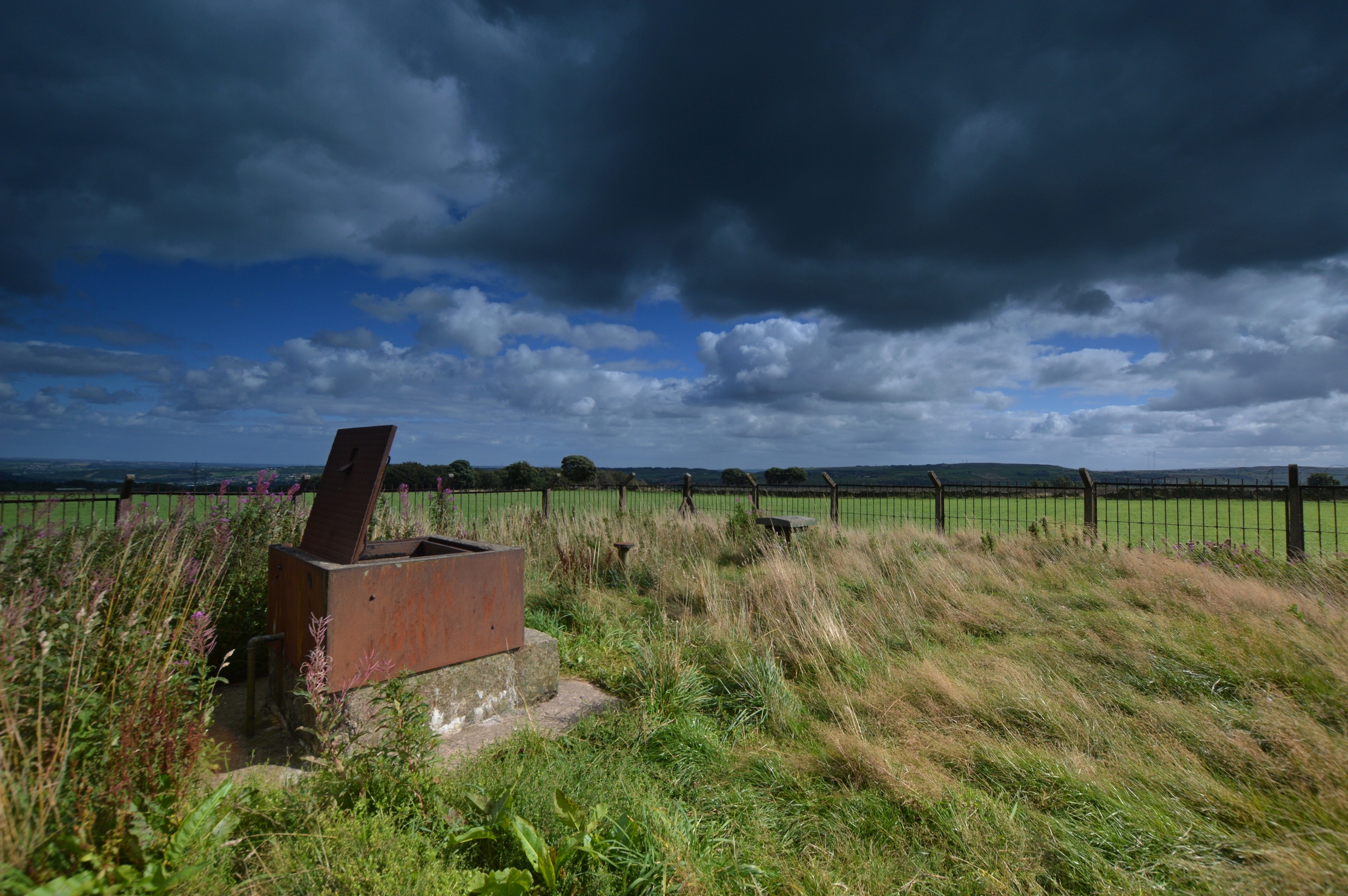 At the entrance there was also a mount for the Ground Zero Indicator (GZI) which was a four pinhole camera which recorded the height and direction of a nuclear strike from its flash. 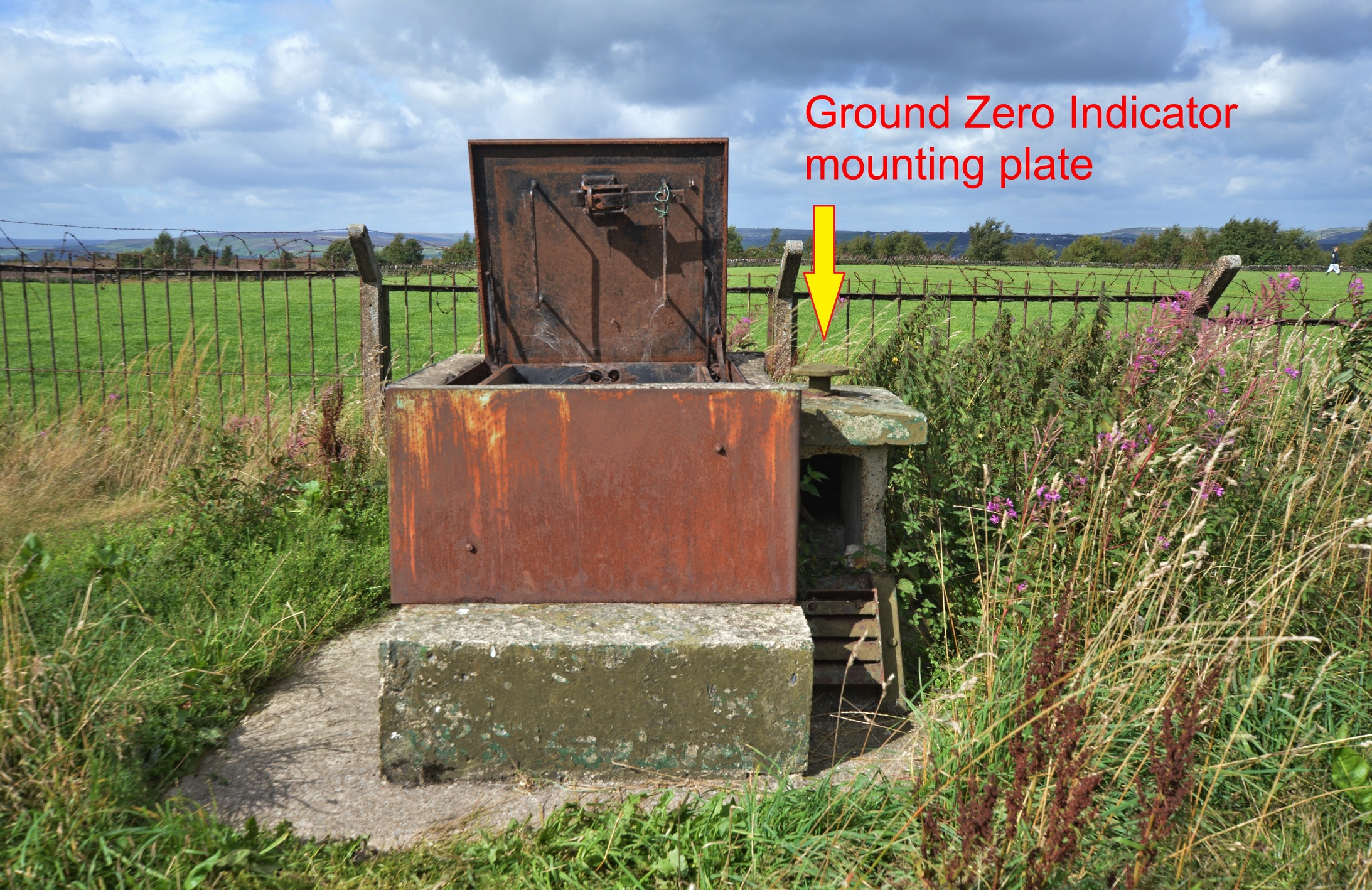 Close up of a GZI mount, this one at Mellor in Lancashire 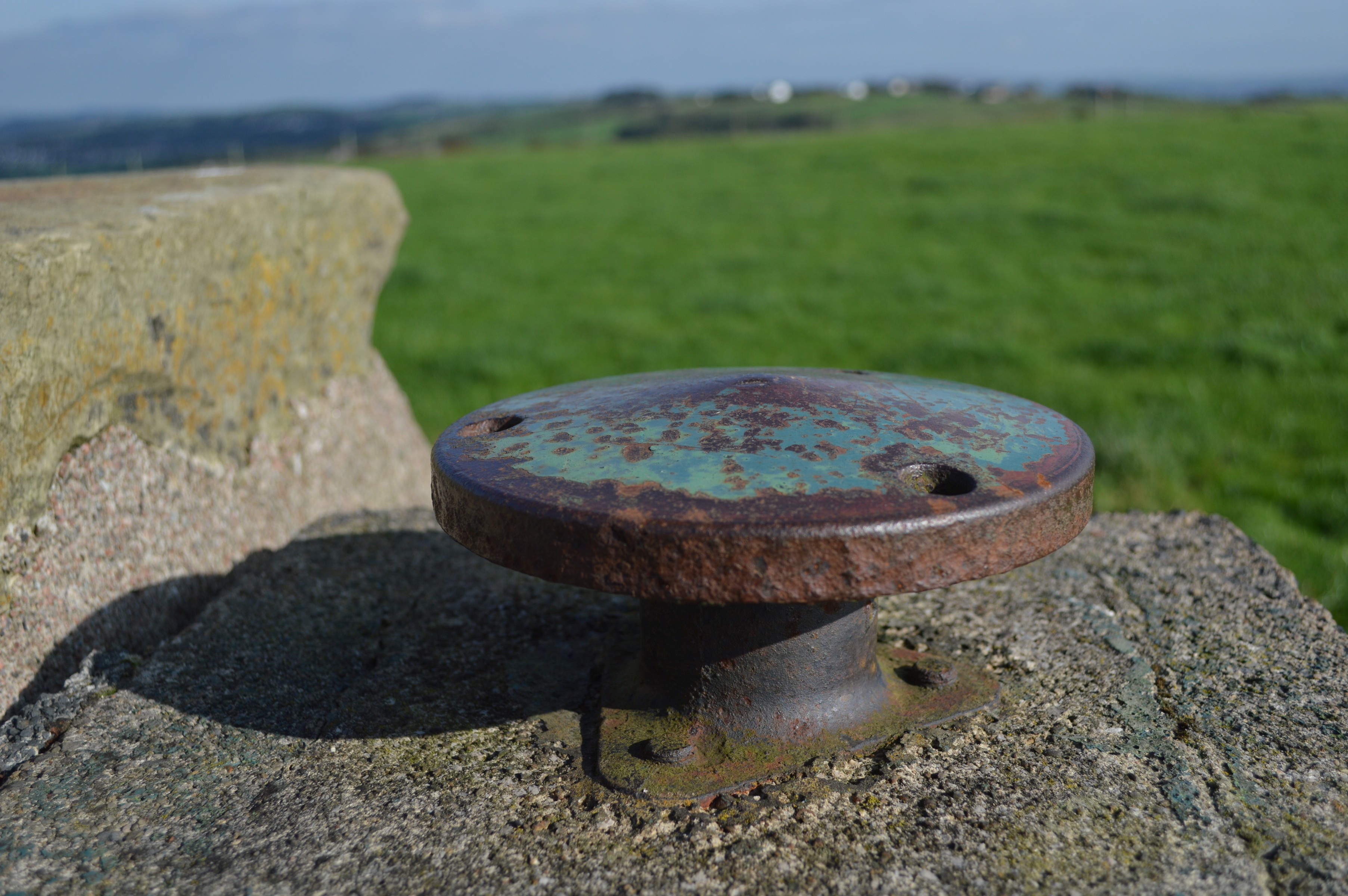 This photo is from Wikipedia and shows (inset) the pinholes for the camera and the photographic paper inside the unit which recorded height of the flash and direction it came from. 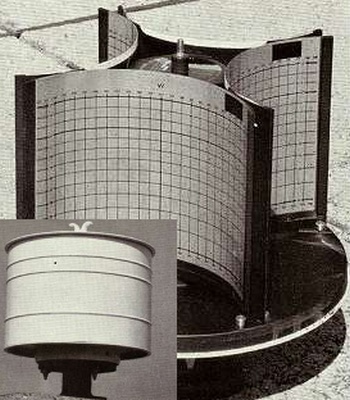 A third monitoring system was the Bomb Power Indicator (BPI) which measured the changes air pressure following a nuclear strike. 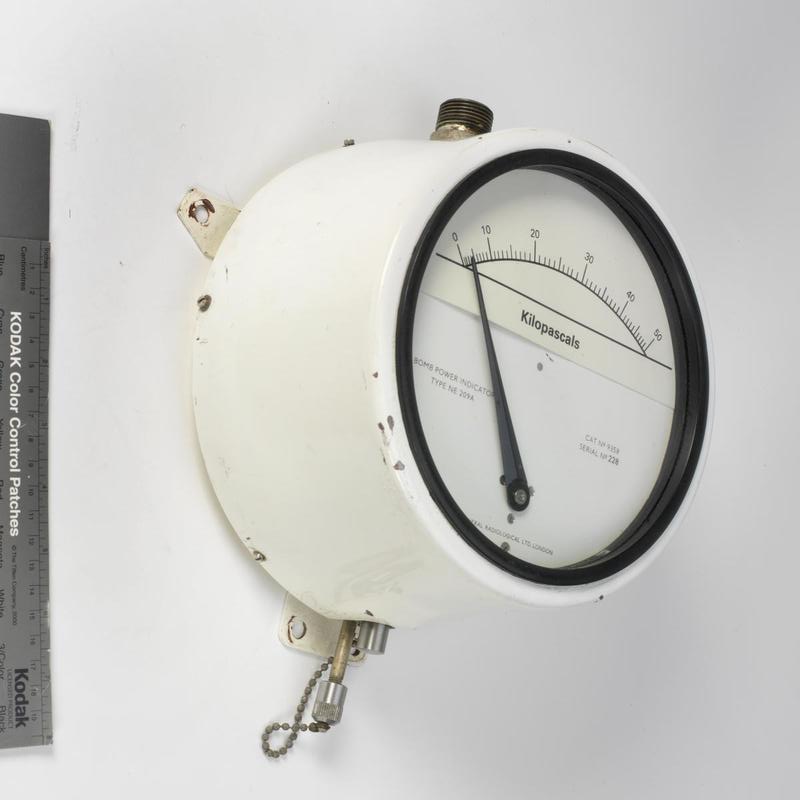 Photo from IWM and used with Non Commercial Licence.

Below;
Interior photo showing the positions of where some instruments would be sited. 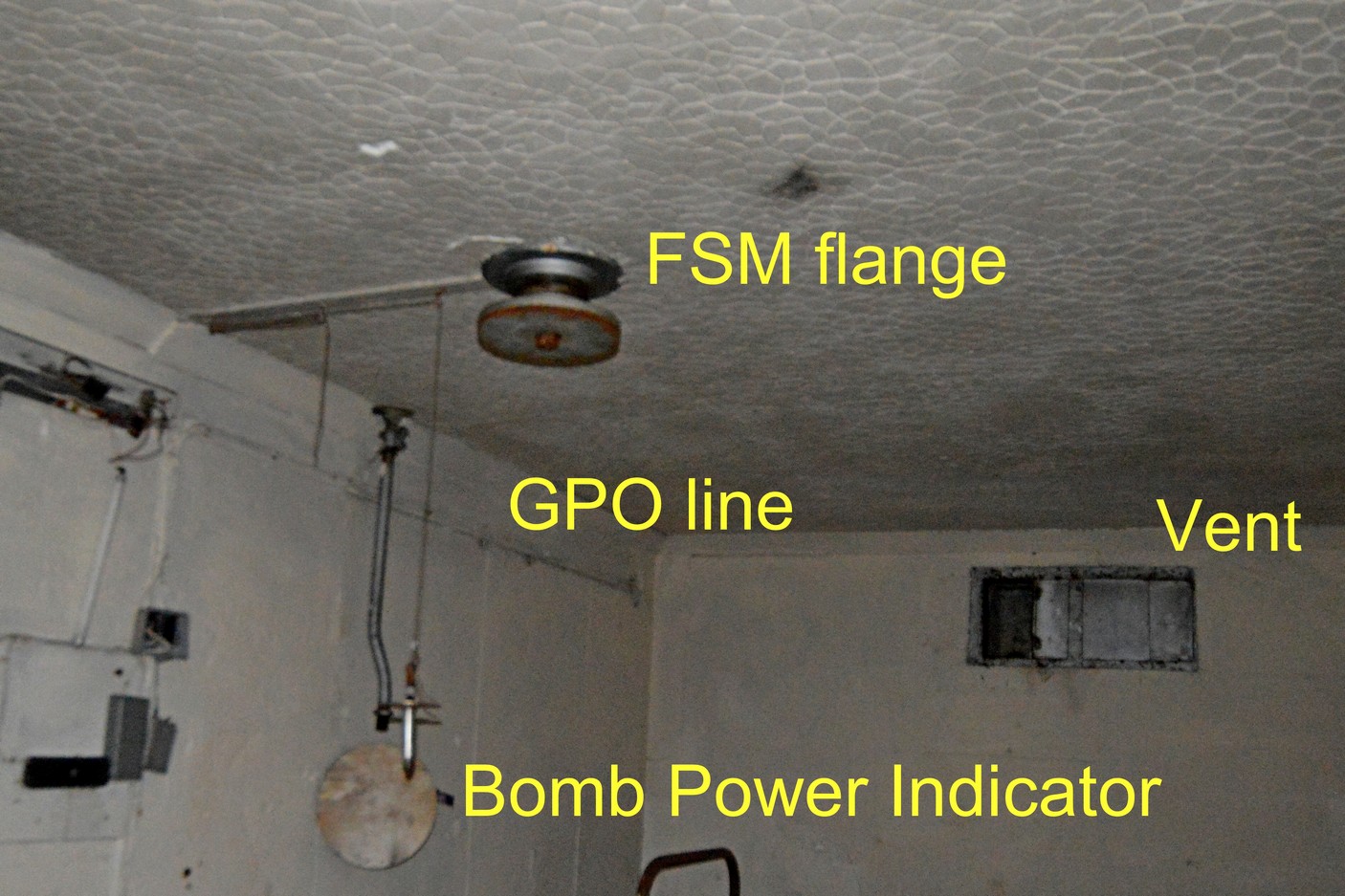 The FSM (to record radiation levels) would be pushed up through the pipe in the ceiling. The vent would be fitted with an air filtration unit. The BPI would be affixed to the wall.

All of these would be operated by 3 people on a rota system. The posts were in use during exercises and in the event of a nuclear attack the crew would sound the alarm to warn the public (the four minute warning) and report readings back to group control until the all clear came – or for as long as the crews survived.

These warning notices were added as crews were hurt by accidentally hitting the hatch counterweight mechanisms inside the shaft. 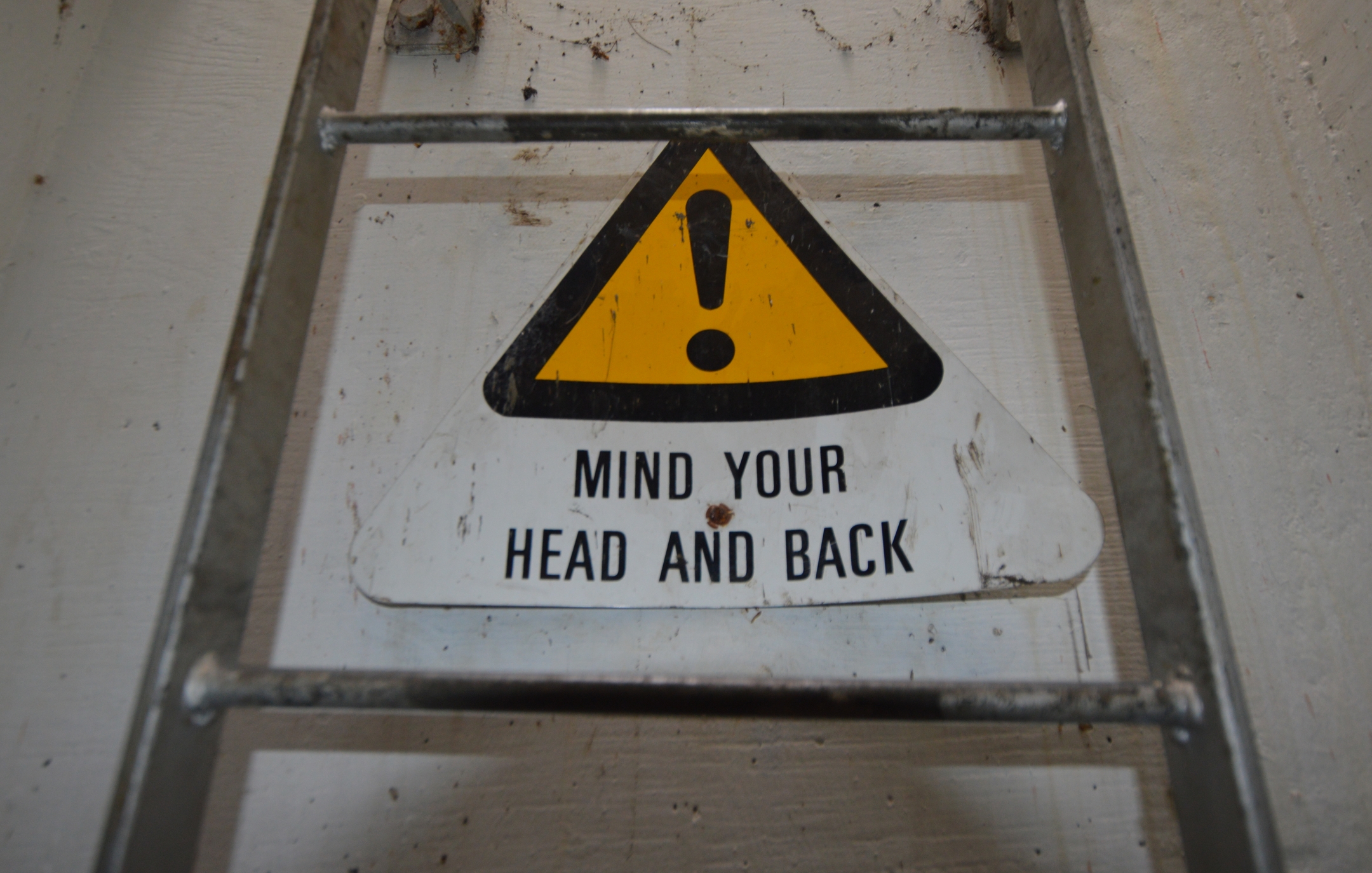 In the event of a build-up to war, crews would have explained the necessity of their role to their families. Those off duty would have been able to remain with them but family members left behind were provided with as much information and support as possible in order that the minds of the crews might be focused on the job, hopefully without anxiety about their family and friends affecting their ability to do it.

A couple of resources

Nuclear Monitoring Posts. This site gives the location and details of all the ROC Posts in the UK. Zoom in on the map to find a ROC Post.

This book,‘The Royal Observer Corps Underground Monitoring Posts’ by Mark Dalton is superb. The picture on the cover shows the hatch open with the FSM dome cover, the GZI and the air raid warning siren visible.