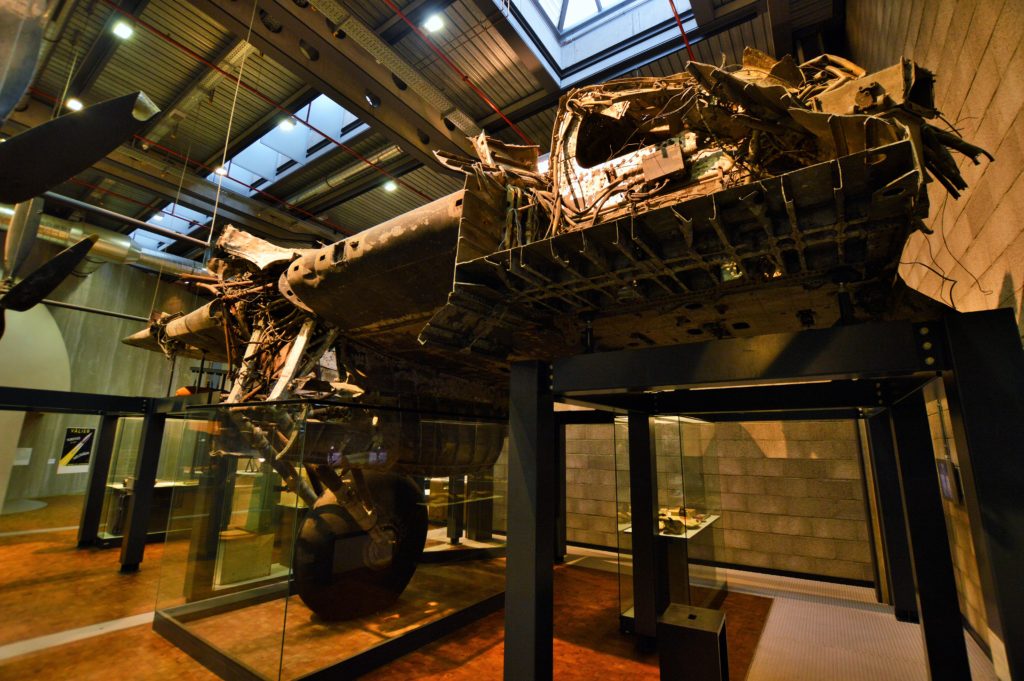 Starboard wing and undercarriage of Lancaster JA914 (code DX-O) on display at the Deutsches Technik Museum in Berlin. The remains are from a bomber which was shot down during a raid on Berlin in 1943.
A board beside the exhibit gives some details about the aircraft and its recovery from the lake of WÃ¼nsdorfer See near Zossen, south of Berlin on 29 September 1997.
JA914 was lost during a night raid on 3/4th September 1943. The 57 Squadron bomber was based at RAF East Kirkby in Lincolnshire.
The aircraft was shot down over Berlin by a FW190 nightfighter flown by Uffz Fritz Brinkmann at half past midnight. The Lancaster crashed into the lake, killing all on board.
CREW
Sergeant J.T Carruthers RAF
Flight Sergeant W.E Grindley RAAF
Sergeant H.I Jones RAF
Flight Sergeant David. Livingstone RAAF
Sergeant A Moore RAF
Sergeant H.M Porteus RCAF
Sergeant A Sutcliffe RAF

A copy of Die Welt provides some details of the recovery and the memoir of a witness; 10 year GÃ¼nter Bethke who saw the British bombers coming from the south and heading for Berlin. Two German night fighters attacked the British. A four-engined bomber swerved from the conflict and “curved in a burning loop over the lake. With a deafening crash the plane exploded,” he recalled.
The recovery of the Lancaster cost 25,000 Marks (about Â£10,000) and was funded by the German Technology Museum in Berlin (DTM) where the wreck is now displayed. About Â£10,000
Regarding the crew, Bethke said in 1997, “two bodies, my father found and buried on the morning after the crash near the lido. The English had the dead transferred laterâ€¦. Two more dead, still strapped in their seats were sat in the fuselage, were recovered by the Soviets”.
One crew member may have survived the crash but appears to have been shot immediately after the crash in the reeds by the lakeâ€™s edge, if I have the translation correct;
â€œEin drittes Besatzungsmitglied soll unmittelbar nach dem Absturz im Schilf erschossen worden seinâ€