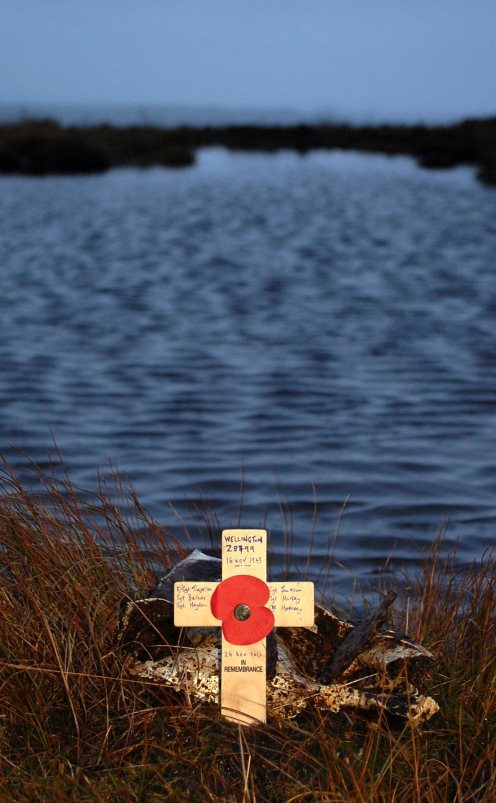 The exact location of the impact point of this crash is now unknown. I spent an hour searching a wide area and found some small fragments (pictured above including 2 bits of geodetic framework, each just a couple of inches long) near to this spot.

This probably isn’t the actual impact point but I choose it for the photograph. I was up there before sunrise this morning (I know how to enjoy Christmas!) but there was no colour in the sky. The water – a large puddle really – added a bit of interest.

At 2.30 am on 16th November 1943, Wellington Z8799 of 28 OTU, piloted by 24 year old Flight Sergeant Timperon of Ardrossan, South Australia, crashed on the moors near Chorley, Lancashire, with the loss of all on board.

The aircraft was flying out of RAF Wymeswold in Leicestershire on a night exercise. The cause of the crash was either build up of ice on the airframe rendering it uncontrollable or it may have been caused by the emergency dinghy breaking free from its stowage compartment and damaging the tail (as the consequent investigation evidenced). Either way, the Wellington went into a steep dive which F/Sgt Timperon could not pull out of.

(Note two of the crew have the name Joseph Banks; initially I thought this was an error, but after much researching it seems this was the case. Also the crew positions given are not that definite)