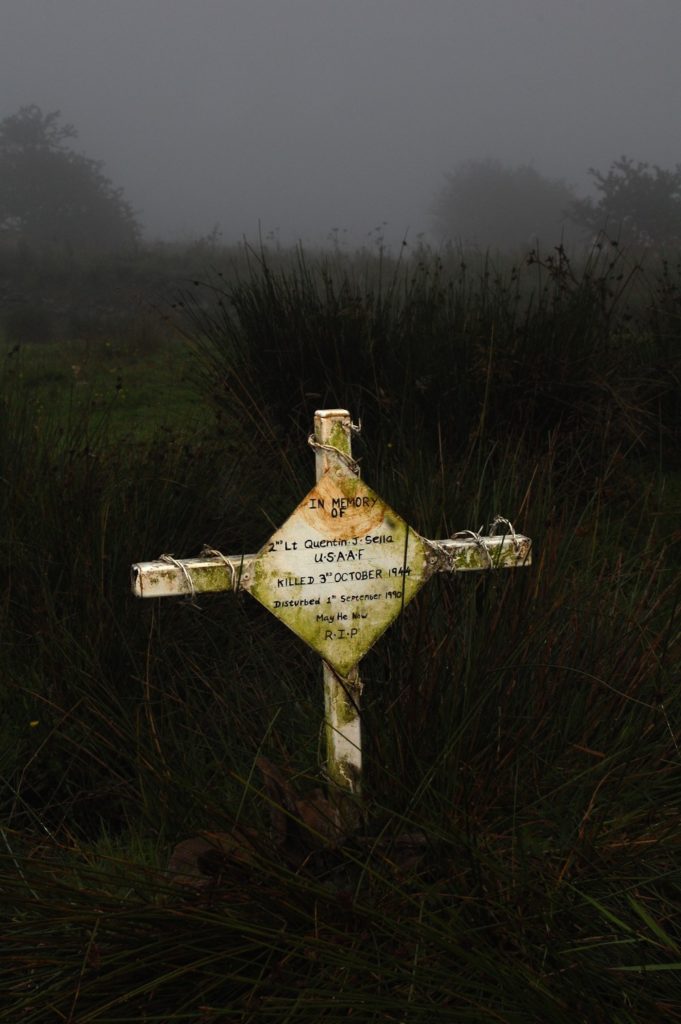 Photo above shows the old memorial marking the spot where 41-6628 crashed. A new memorial has been built (see photos below) but landowner Martin Glover – who made the cross and the new memorial – decided to keep the original memorial cross as it is a part of the history of this site.

Edit 03 October 2021 – please see further below for some photos taken today, the anniversary of the air crash.

03 October 1944. American pilot Second Lieutenant Quentin J Sella was flying in formation with 3 other P-47s from RAF Atcham near Shrewsbury, when he lost control and nose dived into the ground at Thorncliffe near Leek, Staffordshire.

The flight was to practice battle formation flying, and in close formation the three pilots copied the leader, or in the case of 2nd Lt Sella, copied the airman copying the leader, watching his starboard wingtip, mimicking every move.

However the four Thunderbolts entered dense cloud and upon losing visual contact with the aircraft he was formated on, 2nd Lt Sella appears to have become disoriented in the cloud and lost control, putting the P-47 into a dive from which he could not recover. It is quite possible that he thought he was climbing rather than diving, until breaking the cloud base and realising his error.

2nd Lt Sella tried to bale out, the canopy being found some distance away. But the forces upon him prevented escape, and the Thunderbolt buried itself so deeply into the soft ground that recovery was impossible.

A cross marks the spot. On it are words alluding to what Cunningham refers to as a “dubiously authorised excavation of the site”;

For a long time the identity of the pilot killed here was in dispute, and the memorial at St Edwards Church in Leek still refers to the pilot being 2nd Lt Avril J Foster, P47 pilot killed 02 December 1942.

Edit 14 September 2020
As can be seen in the comments section below, a great deal of further work has been done by researcher Amanda and by the land owner Martin and his wife Micheala. The latter have made a beautiful plaque and memorial stone which will be completed for the anniversary of the crash on 03 October 2020.

The photo of Second Lieutenant Quentin J Sella is provided couresty of Quentin’s younger brother Joe, via Amanda. It is used with kind permission.

It is great to see the work these people have done to remember 2nd Lt Sella and to make efforts to contact his family and provide a new memorial. Thank you all! 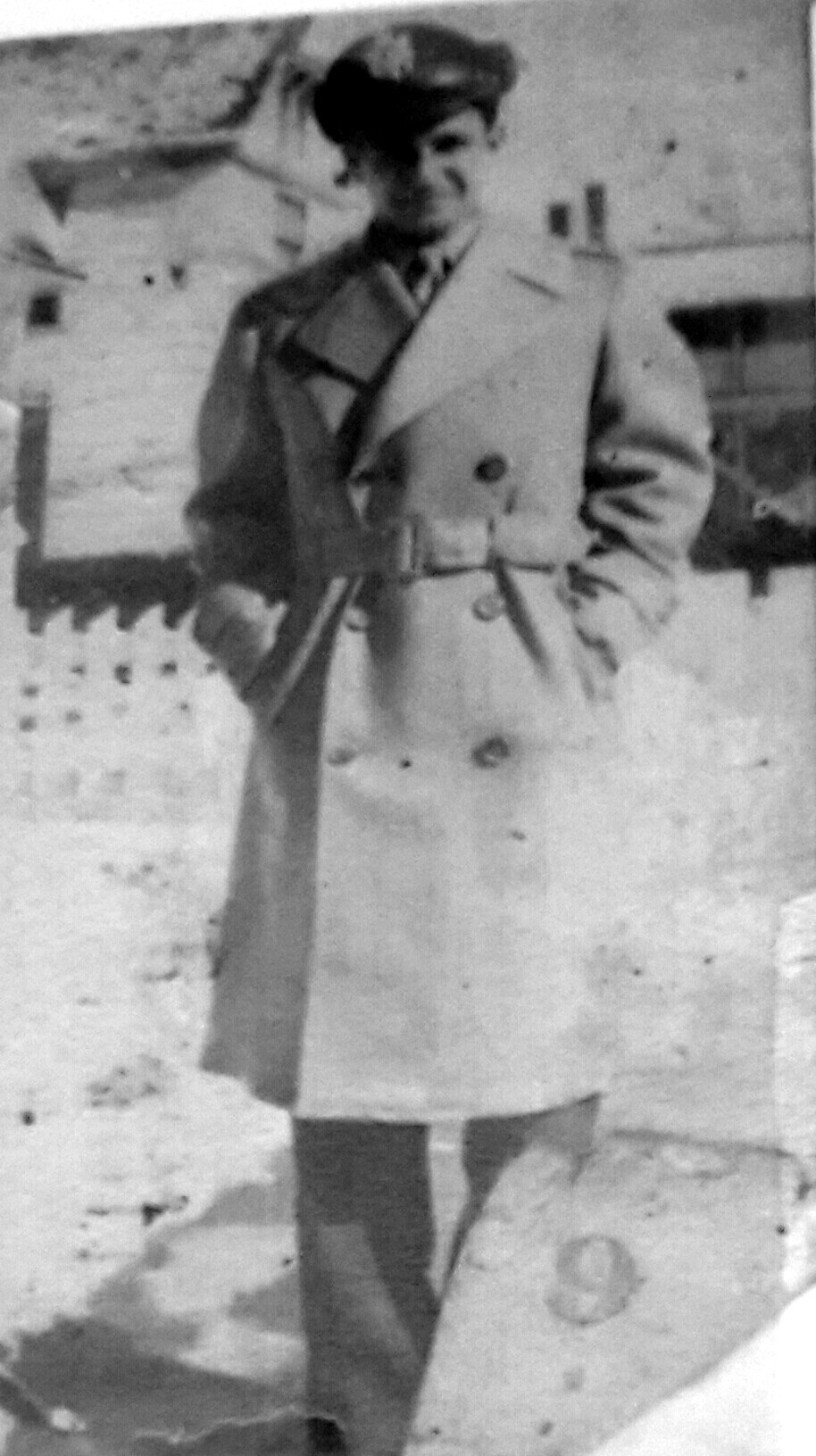 Photos taken 03 October 2021, the anniversary of the crash
Fragmentary remains 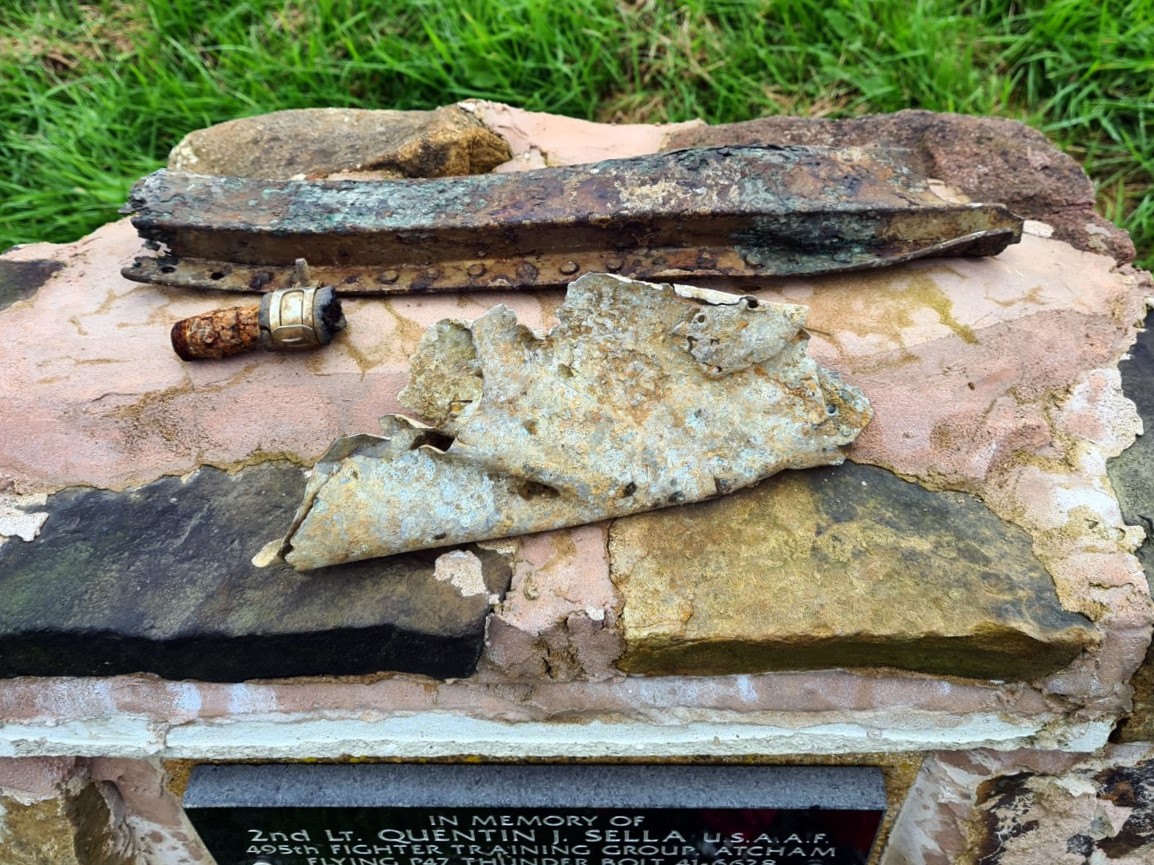 Below, landowner Martin Glover who has maintained the site, hoisting a new US flag on the anniversary 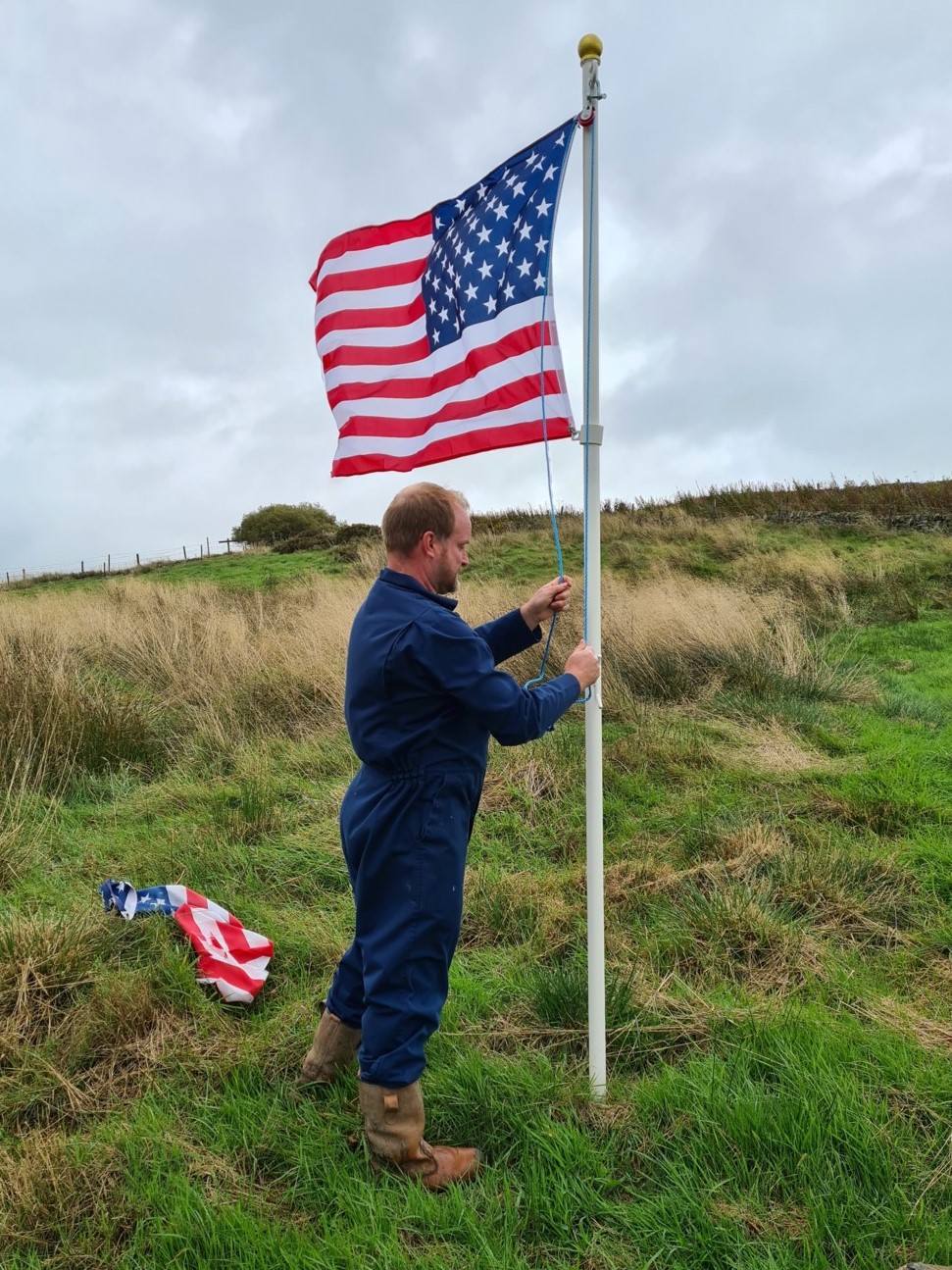 Below, the new memorial with a plaque showing Second Lt Sella’s family. 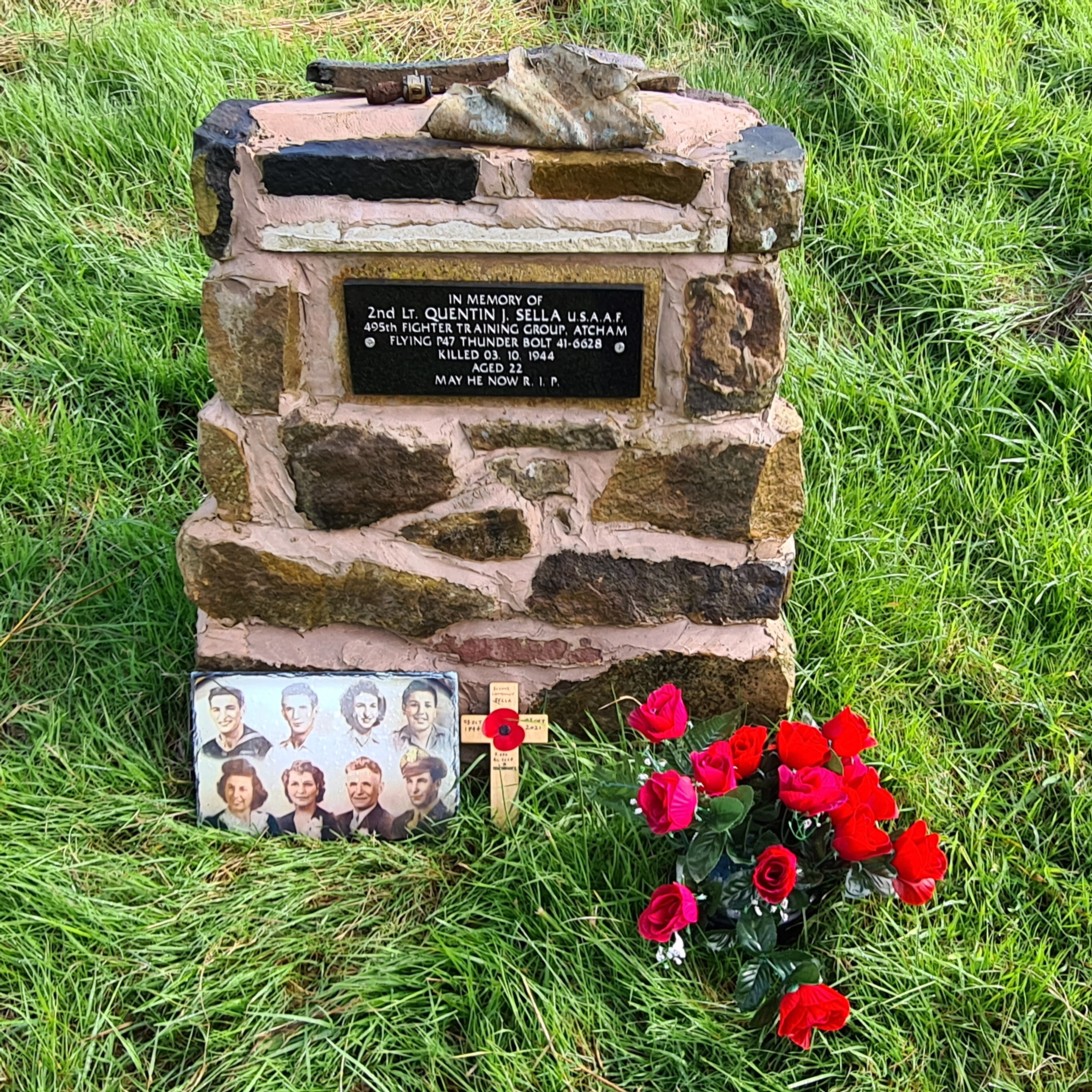 Below, Martin’s original memorial cross which is at the centre of the impact crater. 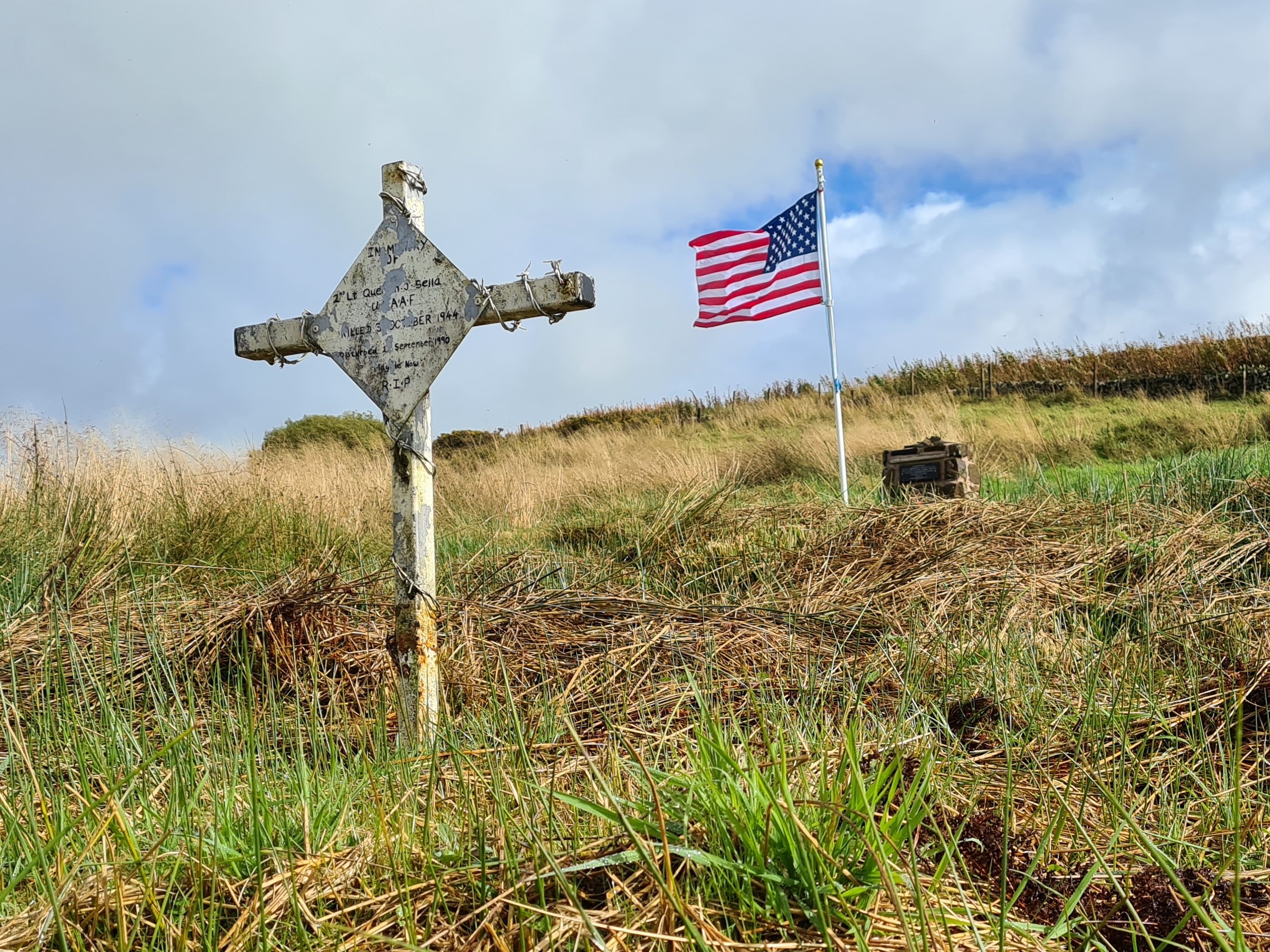 Below, photo of Quentin Sella and his trumpet, provided by the airman’s family via Amanda Cockcroft. During the visit to the crash site today, Amanda played a recording of Quentin Sella talking and then playing this trumpet. It was a very moving visit. 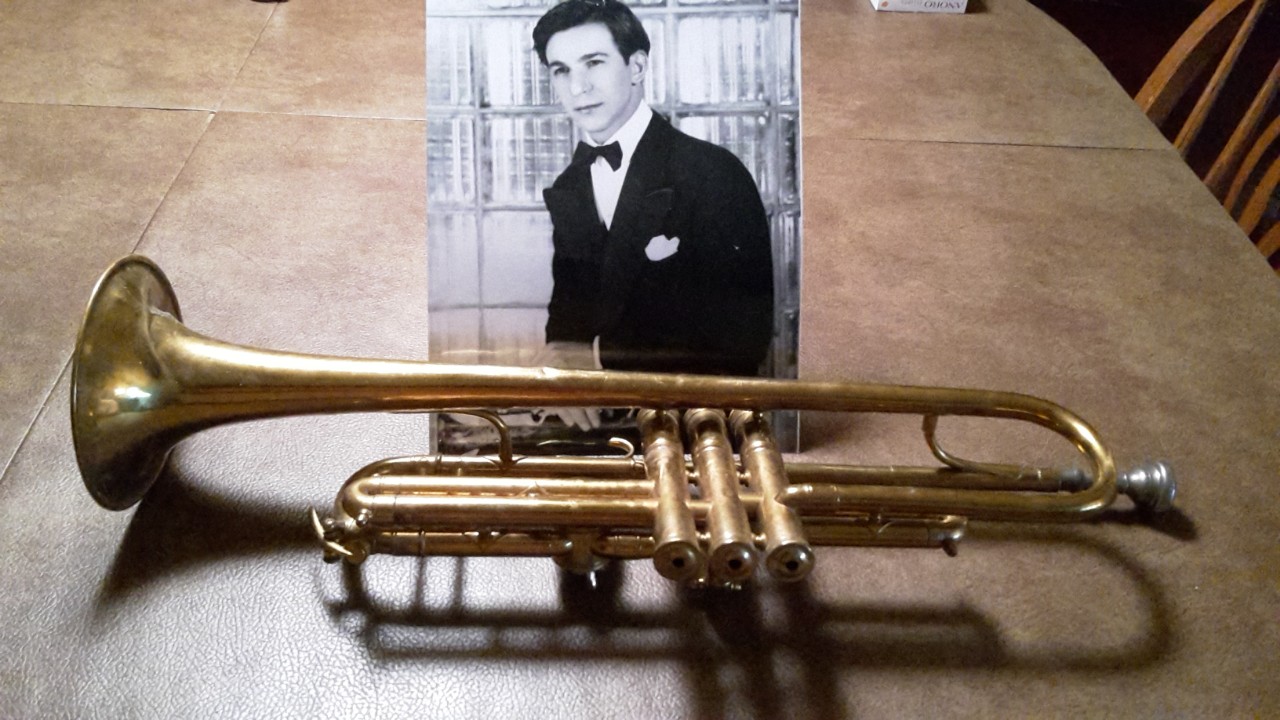