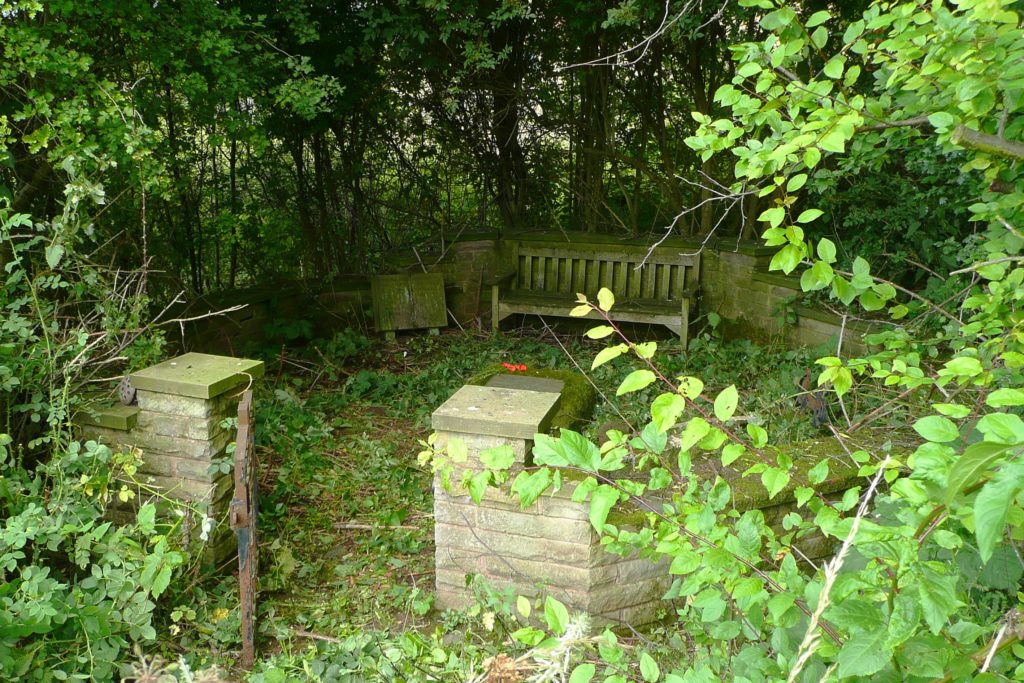 Note; since this visit, the site has been cleared and a new memorial has been placed near the cenotaph in the village.

This memorial was built over the impact crater of Vampire jet XE854, which dived into the ground on 9 March 1959, by the parents of pupil pilot Midshipman Ian Ferguson Wilson.

His ashes were interred beneath the memorial plaque at the centre, where you can see a few poppies in the photo.

50 years ago this was all fields but in the intervening years a housing estate had been built around it. Not that this memorial was remembered in any way. It was sited within rough ground bordered by houses. This enclosure was unused and had become completely overgrown.

Cunningham noted on his visit in 2006 that the memorial was
“completely concealed…rather in the way of a jungle-swallowed temple.”

With this in mind, I arrived in July 2009 carrying a yard brush and some garden shears. Having scrambled along a muddy ditch, and hacked my way through chest high stinging nettles and bindweed, I arrived at the memorial scratched, stung and covered in creepy crawlies.

Ok, it wasn’t quite Indiana Jones but it was an odd feeling; this crash site was the nearest to civilisation to any I’d visited – the back gardens of houses just metres away – yet it was the most difficult to reach.

I set about some adventure gardening, cutting and trampling down the nettles, pruning back the branches and I hauled out a bramble which had taken root, revealing a boot scraper. I laid some poppies plucked from the edge of a nearby wheat field and sat on the bench for a couple of minutes to pay my respects. By the end of summer it would have all overgrown again.

However before it all grew back, staff from Rotherham Council also visited the crash site and just after my visit (their plans were not known to me when I was there) the area was cleared and a new memorial built near the church, making a nice human interest story for the local press. It is a good thing too that the new memorial was created, the more people who remember these men and the places they died the better.

19 year old Midshipman Wilson of the Fleet Air Arm had been on a training exercise from RAF Linton-on-Ouse near York. Having completed his tasks, he took a detour to buzz his home, not for the first time apparently. The Vampire was seen to fly low above the parish church and roof tops before making a climbing turn and disappeared into low cloud. At this point, Midshipman Wilson lost control of the jet which may have stalled in the climb, or possibly he became disoriented in the cloud. At that height there’s no margin for error and he was killed instantly as the Vampire broke through the low cloud and plunged to the ground.

The plaque at the centre marked the point of impact. Also in the memorial was a stone tablet in the form of an open book, placed by Midshipman Wilson’s Aunties and Uncle on the occasion of what would have been his 21st birthday.

The plaque at the centre read

WITH PRIDE AND AFFECTION WE HONOUR THE MEMORY OF OUR DEAR SON
IAN FERGUSON WILSON AGED 19 YEARS
MIDSHIPMAN PILOT, FLEET AIR ARM
LATE STUDENT OF ROTHERHAM GRAMMAR SCHOOL WHO LOST HIS LIFE WHEN HIS VAMPIRE T.II JET PLANE CRASHED HERE MARCH 9TH 1959
“ONE CROWDED HOUR OF GLORIOUS LIFE IS WORTH AN AGE WITHOUT A NAME”

The other memorial read

WITH LOVE AND AFFECTION TO OUR DEAR NEPHEW IAN ON HIS 21ST BIRTHDAY DECEMBER 27TH 1960.
HIS AUNTIES AND UNCLE
THE FERGUSON FAMILY

Details from Peakland Air Crashes – The North (2006) by Pat Cunningham