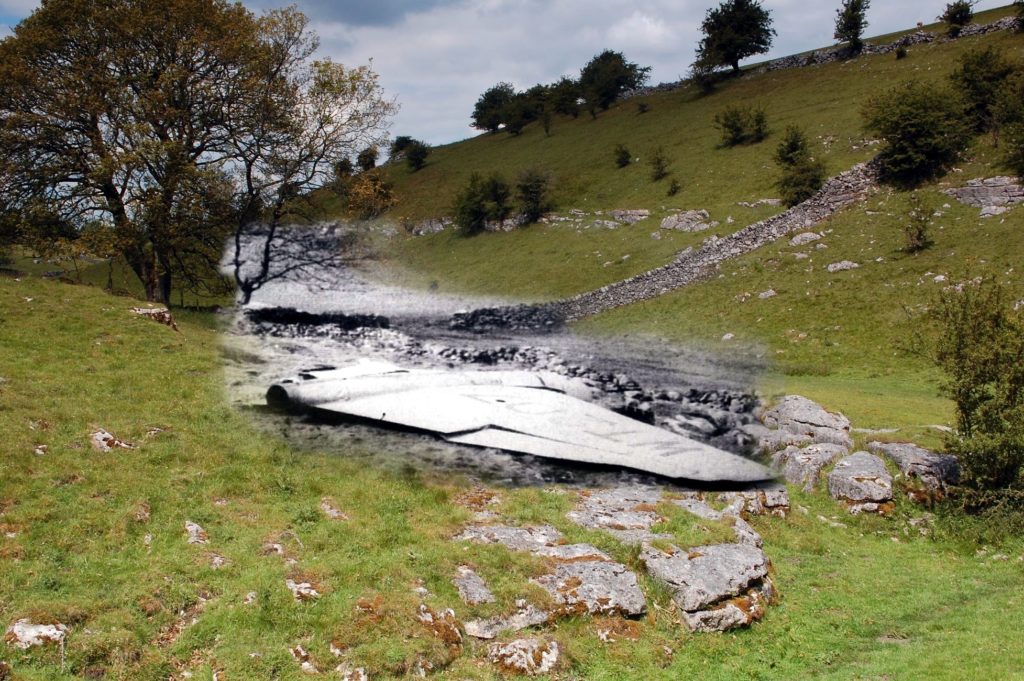 9 April 1958. Both crew members ejected safely and – according to Cunningham – set a new record for the highest emergency ejection up to that point, when their Canberra jet bomber exploded at 56,000ft above the village of Monyash in Derbyshire. The port wing came to rest here in Lathkill Dale, spinning down, according to one eye witness, in much the same way as a sycamore seed falling from a tree.

The crew, Flight Lieutenant John Peter de Salis (pilot) and Flying Officer Patrick Lowe (navigator) were testing an experimental Double Scorpion rocket motor positioned in the bomb bay and designed to take the bomber higher than its jet engines could manage alone. On its descent, Fl Lt de Salis turned the rocket motor back on in order to use up its remaining fuel, whereupon it blew up.

Both crew were able to eject from the aircraft which was disintegrating around them, but were injured, Flying Officer Lowe suffering frostbite while Flight Lieutenant de Salis’ parachute didn’t open properly causing him to spin wildly all the way down.

______________________________________________________________
EDIT MARCH 2014
Regarding the crew;
Please see the comments below from Flt Lt de Salis’ son and from F/O Lowe’s daughter.
J Peter de Salis died in 2005
Pat Lowe died in 2014
Mr Lowe’s daughter has kindly provided link with her father’s account (click here) of this incident, which also has a photo of the man himself. It’s well worth a read, get it from the horse’s mouth rather than my account! Love this quote; “…the aircraft pitched nose down violently and the right wing dropped, there was an explosive decompression and the cockpit filled with dust. With the savoir faire of the typical RAF Flying Officer I thought it was high time I wasn’t there and went fairly rapidly through the ejection procedure, I am bound to say without reference to the pilot.”

Photo below courtesy of the son of Fl Lt de Salis. It is from a newspaper report which comments on how the two men were very experienced aviators and were specifically chosen for this operation. On the left is the pilot, Fl Lt John P F de Salis of Hythe near Southampton, and at right is F/O Patrick H G Lowe of Potters Bar, London. 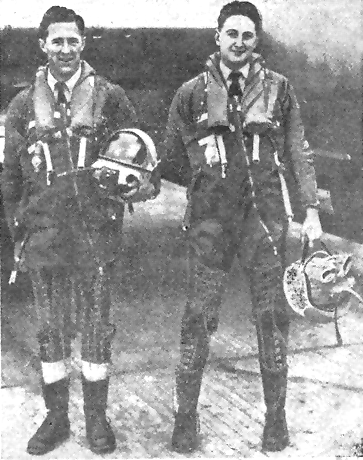 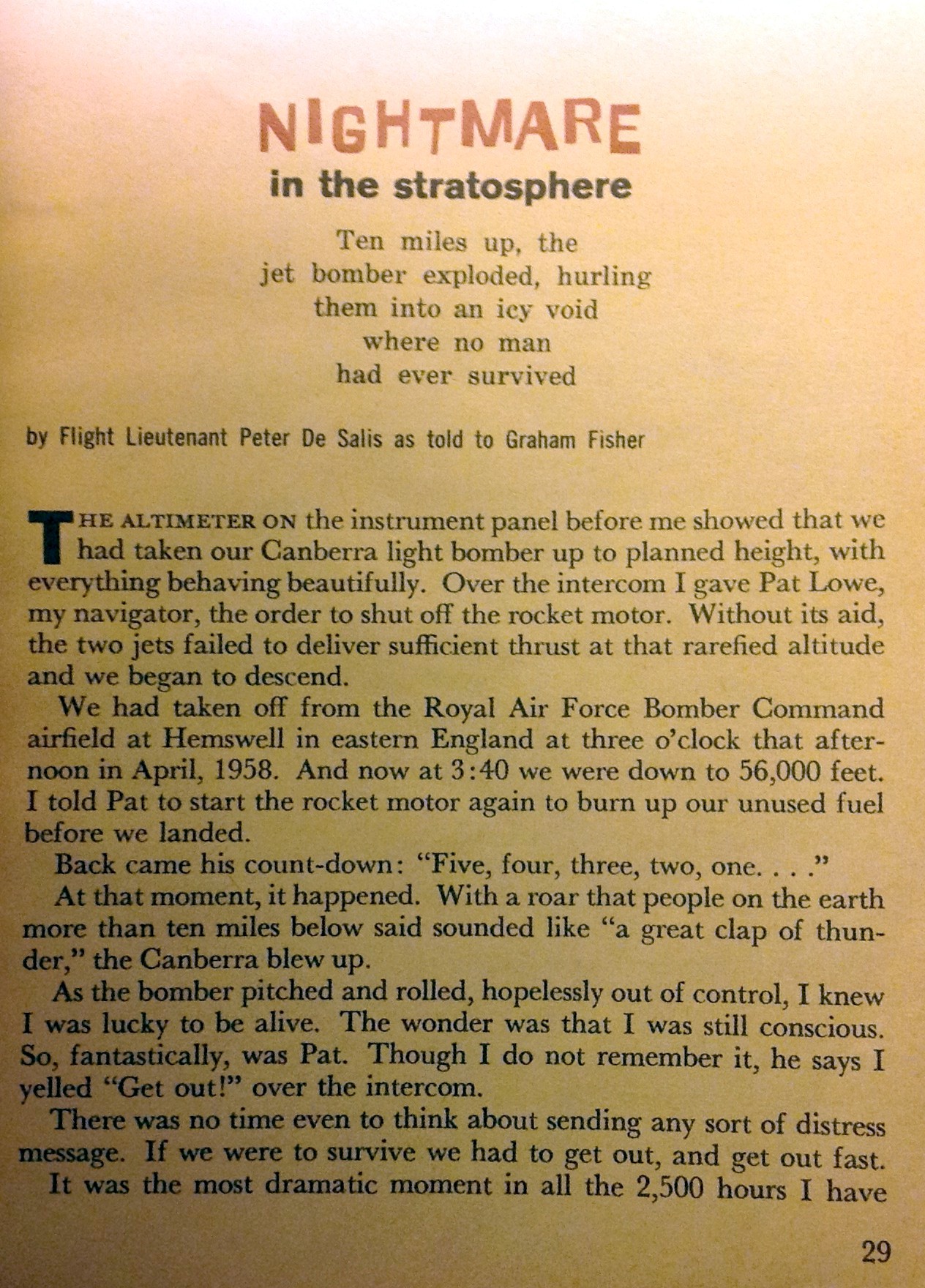 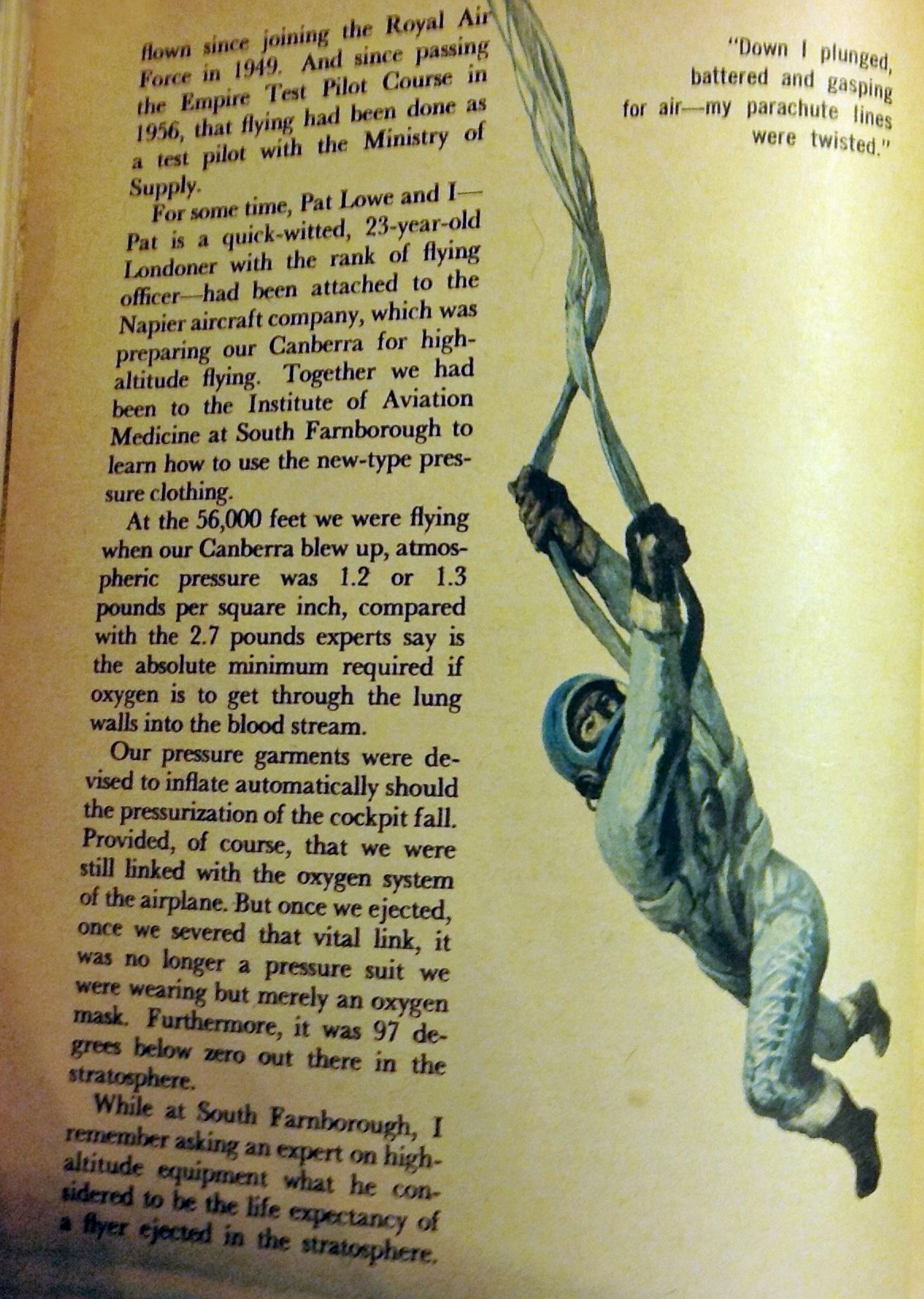 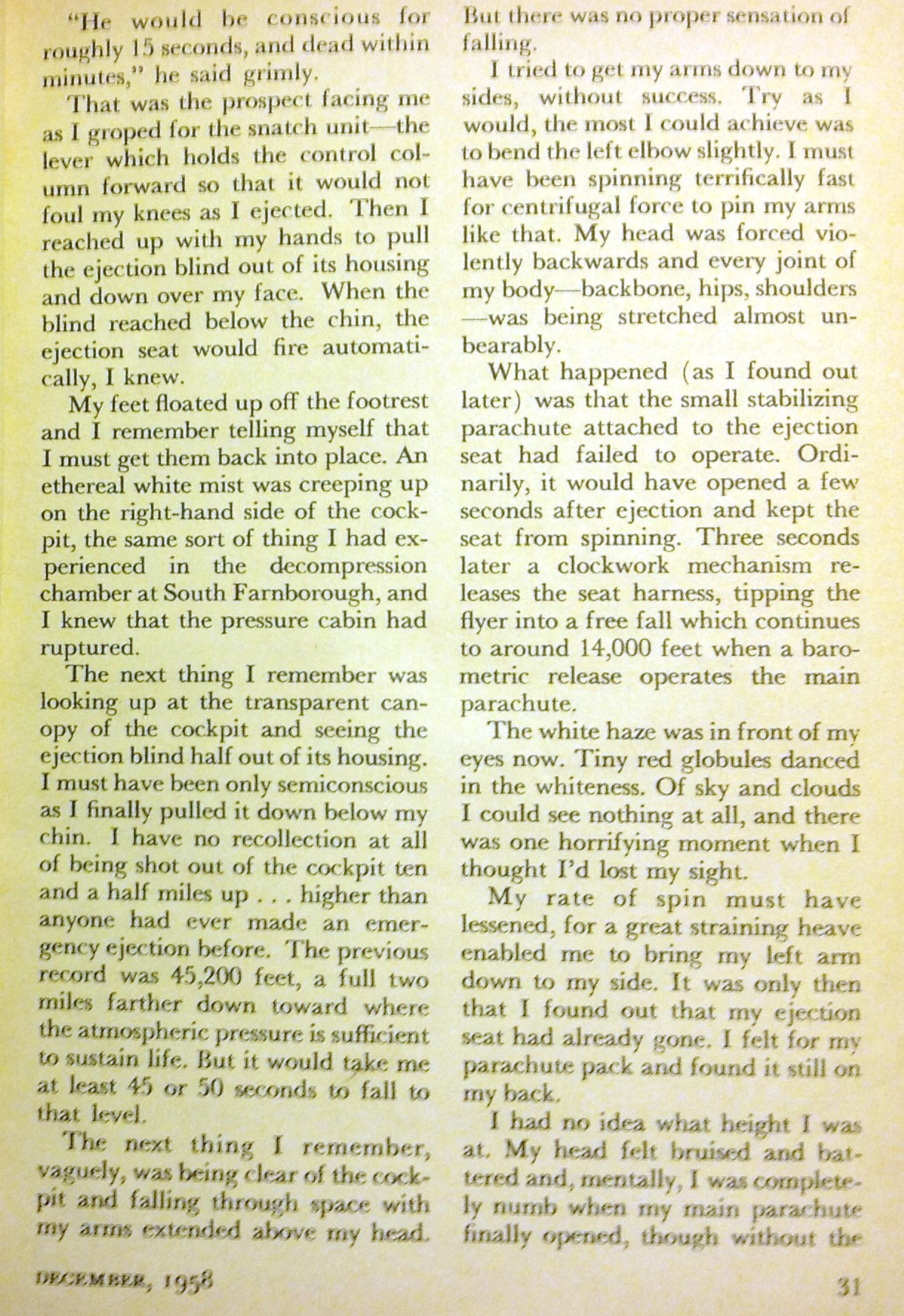 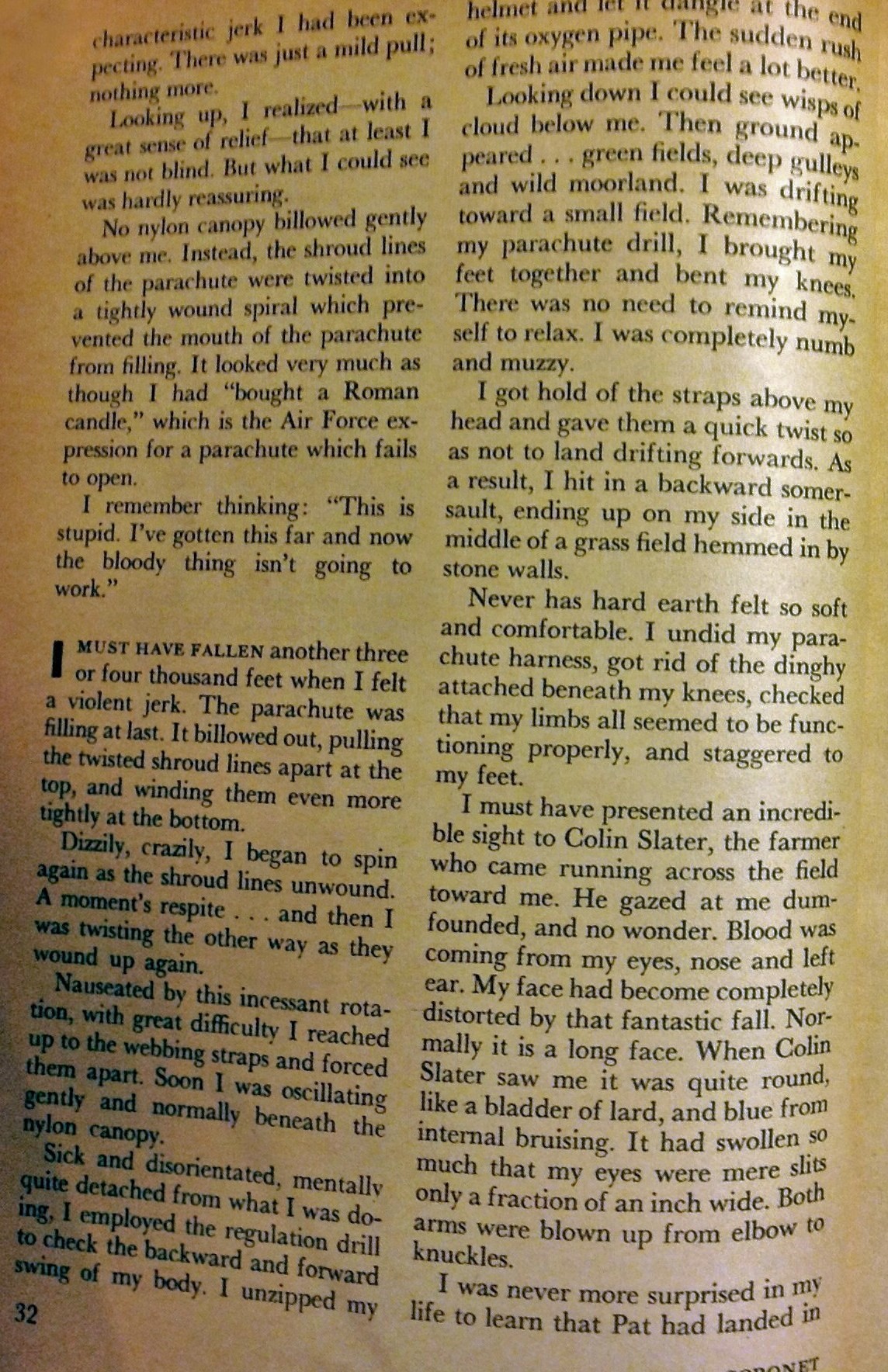 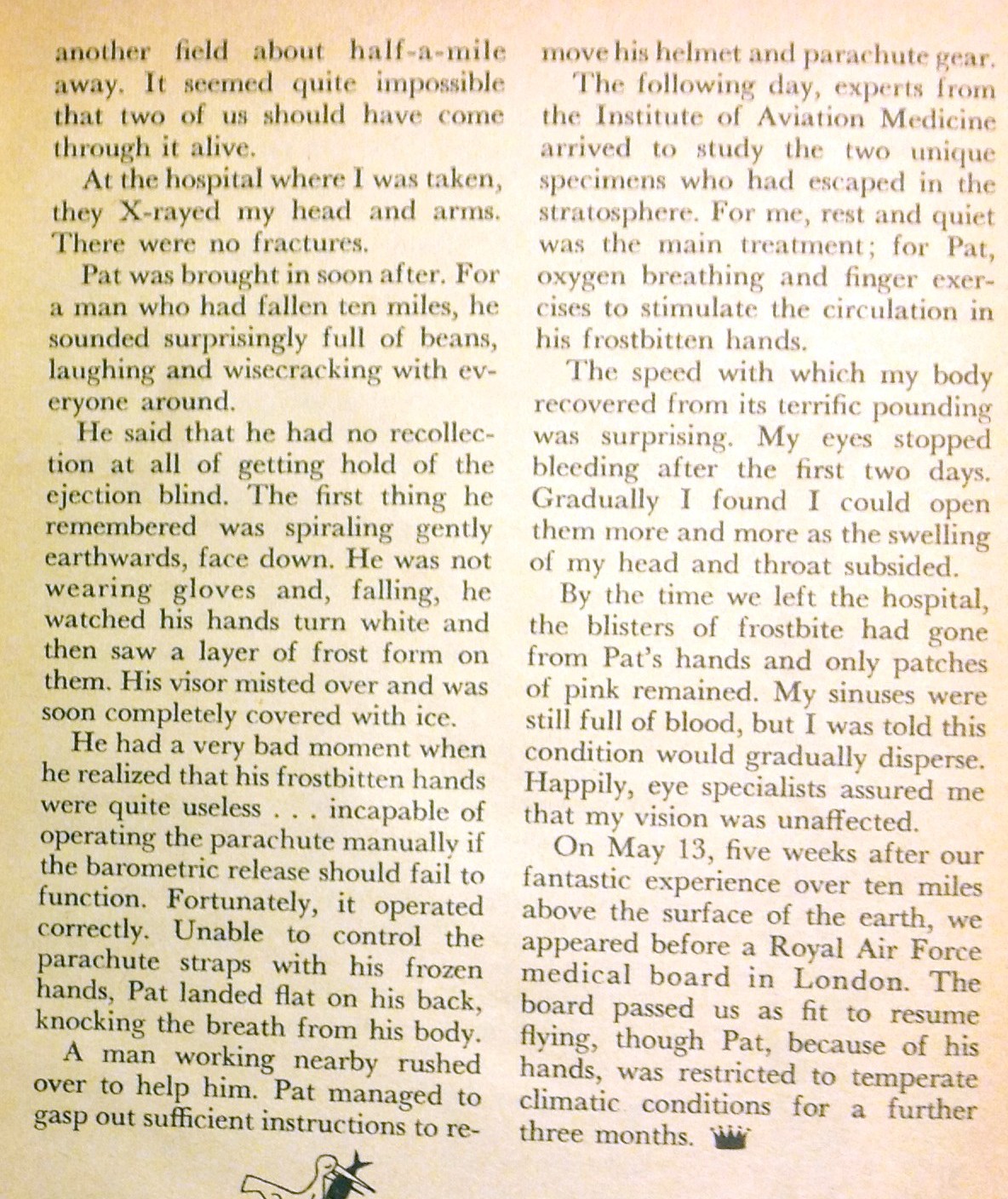