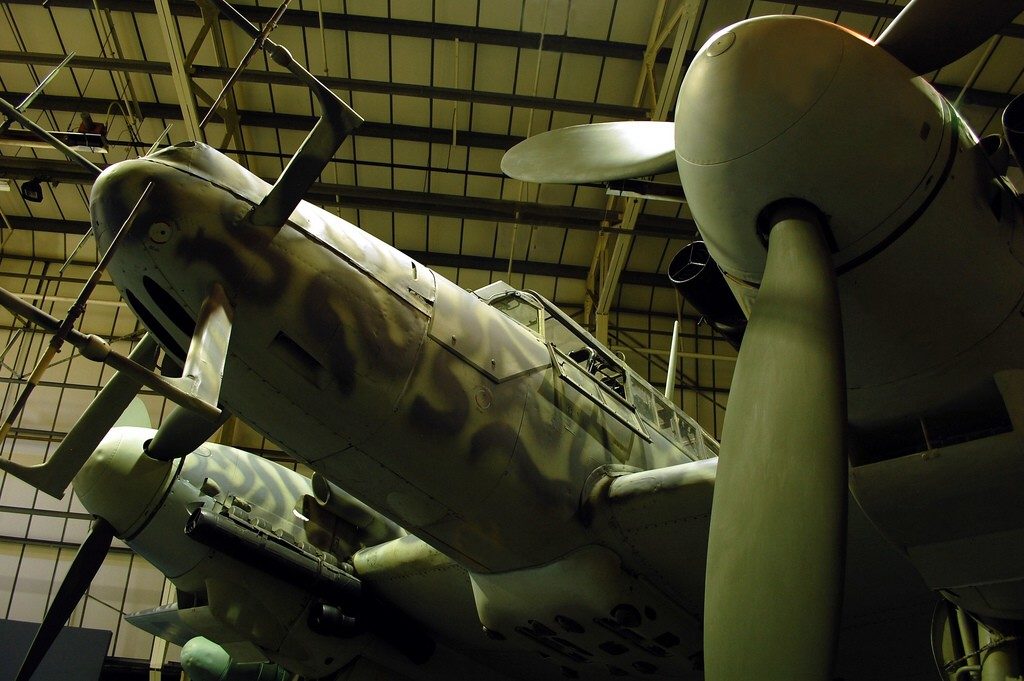 On display at the RAF Museum in London. Not easy to photograph – dificult to get the entire aircraft in the frame and I have tried to edit out some lens flare from the lights above.

The twin engined Messerschmitt Bf110 was designed as a heavy fighter but was out maneuvered by Spitfires and Hurricanes during the Battle of Britain, and they were shot down in huge numbers.

However the Bf110 excelled as a night fighter – the aircraft here is an example of such, with its complicated array of radar antenna. Fitted with a cannon which slanted upwards from the back of the cockpit (and nick named Schräge Musik, or Jazz Music), Bf110 pilots would fly unseen beneath the belly of a fully laden RAF bomber and fire the cannon directly into the bomb bay. The resulting explosion would often take out the attacking plane as well.

RAF bomber crews reported back at debriefing sessions that they had seen what looked like entire bombers just exploding in mid-air. The received wisdom (and whether this was deliberate misinformation or not is unknown) was that the Germans had developed a type of ground to air shell which when detonated, looked exactly like a heavy bomber exploding. RAF crews referred to these shells as Scarecrows. But of course, there were no such things as Scarecrow shells. What looked like a bomber suddenly disappearing in a ball of flame was in fact just that.

One of my favourite aviation photos, a pair of Messerschmitt Bf110s, earlier models to the one above. The uniform sand coloured camouflage for the African campaign, and the markings on the aircraft mean they can be identified and placed. They are of the group ZG 26 “Horst Wessel” and this photo was probably taken over the Mediterranean in 1941.