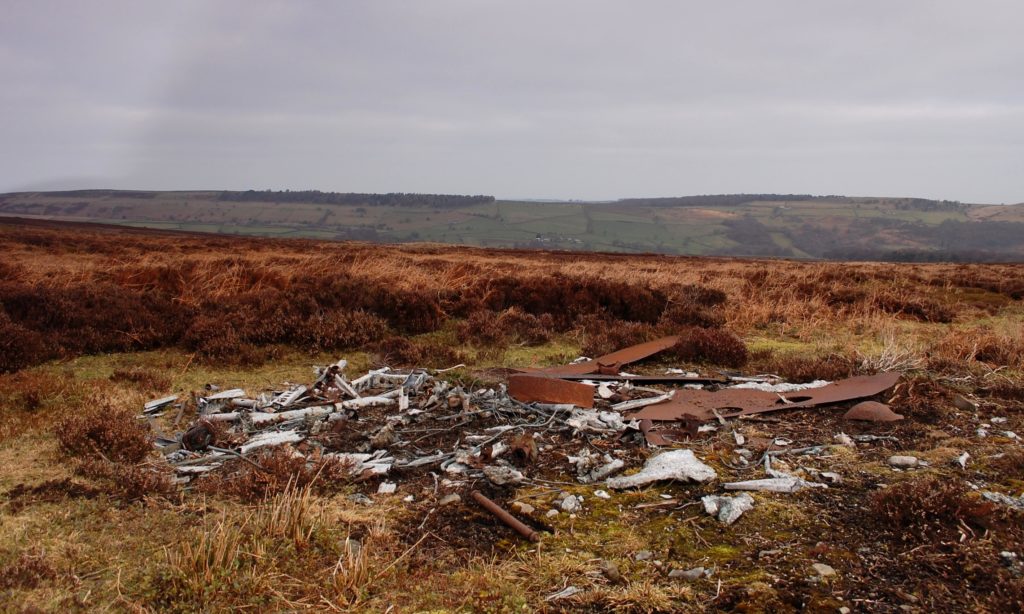 On 9 December 1942 Wellington DV810 of No.21 Operational Training Unit was on a navigation exercise, its crew under the tuition of Flying Officer Baker who was between tours. Lost in cloud, F/O Baker brought the aircraft down thinking they were much further to the east than the moors above Stocksbridge.

Cunningham (2010) notes that F/O Baker was gingerly easing down through the cloud, thought he spotted some change in the uniform grey and a moment later “…there was a bang and my port engine was on fire.”

Being a gently sloping moor, and F/O Baker having had that glimpse of a warning to pull back and warn the crew to prepare to crash, the bomber hit the ground and skidded across the moor before coming to a halt with all on board injured and shook up, but alive. Flying Officer Baker got his crew off the Wellington and clear of the wreck before the fire from the engine ingnited the fuel, and the plane blew up.

F/O Baker ended the war as a highly decorated Wing Commander leading a Pathfinder Squadron. But 4 of those on board were killed a few months later. Statistically it was bound to happen. 3 of the Australians along with 18 year old Sgt Allwight of Reading, got through the rest of their training and were flying Wellingtons from bases in the Middle East with 40 Squadron. On 19 April 1943, these four along with another Australian, Flt/Sgt R.B.McIlroy, formed the crew of Wellington HZ248 ‘R’ which was shot down while bombing German targets at Soliman in Tunisia, by Luftwaffe night fighter pilot Oberleutnant Stefan Machat. All were killed.