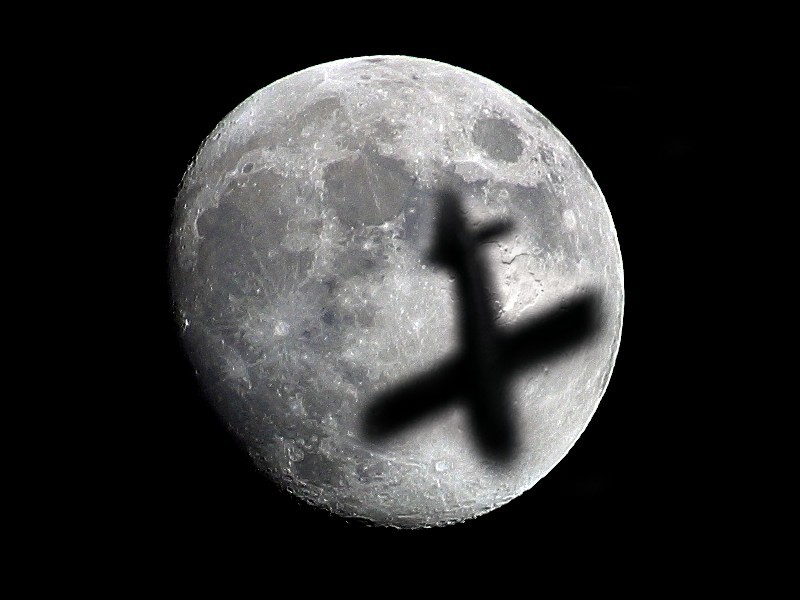 After the air raids of 1940 and 1941, the North of England saw little of the Luftwaffe following Hitler’s decision to go to war with the Soviet Union. German bombers were pulled from attacking British cities and while V1 Flying Bombs and V2 rockets fell on London and the South East, they could not get as far north as Manchester from the launch ramps in Occupied Europe.

However on Christmas Eve 1944, 45 Doodlebugs were launched off the Yorkshire coast from beneath Heinkel He111 bombers flying over the North Sea. The bombers released the V1s aimed at Manchester, then turned back to base. Many of the missiles landed harmlessly; the worst was at Abbey Hills Road in Oldham where 27 people were killed.

Below; my not very good attempt at showing what a V1 in flight might have looked like 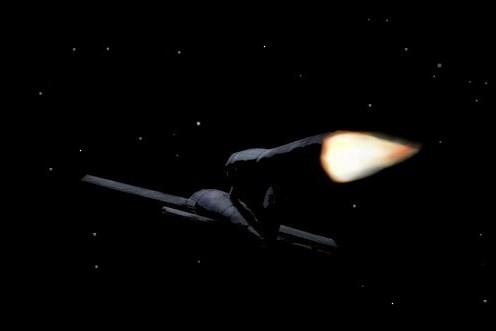 Some stats about this air attack;

45 V1s were launched in total.
31 crossed the Yorkshire coast, while 14 fell in the North Sea.
Only 7 fell within the built up area of what is now Greater Manchester, and only 1 missile (out of 45) fell within the Civil Defence Area for Manchester (that one was at Didsbury).
It was the furthest north V1s were ever used.

42 people were killed in the attack.
109 were injured, of which 51 people were seriously injured.

The V1s were launched between 0500 and 0600 on the morning of Christmas Eve 1944.
It took about 30 minutes from launch to the missiles falling to earth.

Typically buildings were damaged up to a mile away. The missiles could not be guided with accuracy, hence they came down in fields, on the moors as well as in towns. Sometimes they would turn round or spiral down. A few of the Doodlebugs were well off target, one landing near Chester, one as far north as County Durham while another came down at Woodford in Northamptonshire.

1 of the attacking Heinkel 111s was shot down over the North Sea by Mosquito TA 389 while another was damaged by Mosquito HK 247 and crash landed at Leck in Germany, killing one of the crew.

Map showing where the V1 missiles fell, click here to view the map and list of all locations. 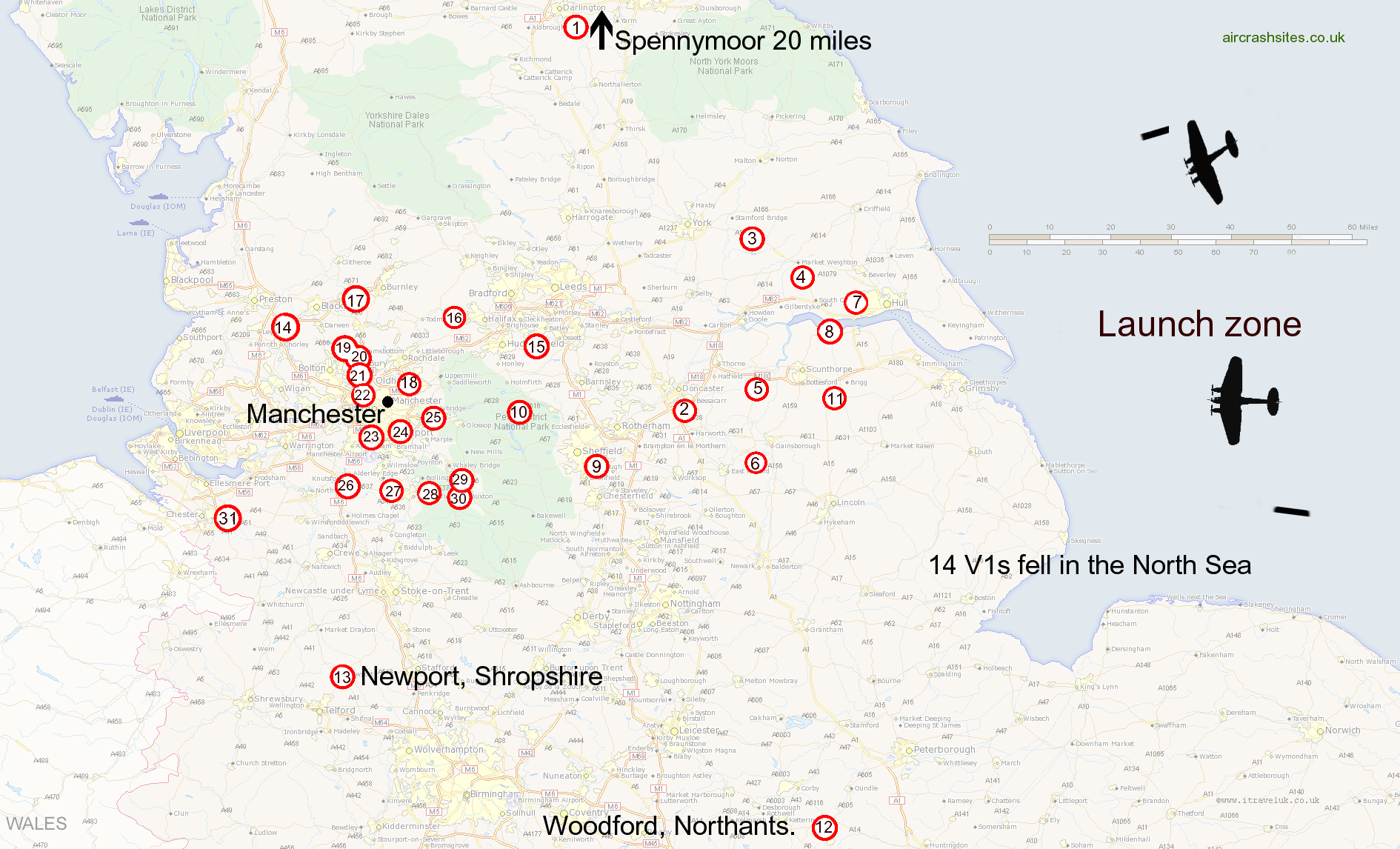 From the numerous testimonies beneath the photos on this site from people who were there, it is clear that although V1s were unheard of in the north of England, people quickly recognised the tell-tale sound of the Argus pulsejet engine from having seen newsreels of V1 attacks on London. Consequently they reacted quickly, getting children to hide under their beds.

Links to photos of the V1 bomb sites from this attack I have visited.

Also called Buzzbombs (on account of the noise of the pulsejet engine) or Doodlebugs, the V1 was part of Hitler’s Vergeltungswaffen programme, i.e. ‘revenge weapons.’ There was no intention to attack particular targets which might assist the war – ordnance factories or airfields, for example. V1s could not be aimed with such precision. Instead the intention was to strike terror among British civilians as revenge for what the Allied airforces were doing to German civilians.

Below; A V1 about to impact, probably in Antwerp. Picture courtesy of Terry Foote, taken by his father. You have to admire the bravery of the (American) photographer! Below; sound file of a V1 flying bomb passing overhead before the engine cuts and there’s the silence before the thing impacts.

Had V1s been in use earlier in the war, the outcome may have been very different. They were cheap, involved no risk to Luftwaffe personnel, put RAF fighters on the defensive and caused massive damage when they hit built-up areas, as well as affect the morale of British civilians. V1s were the first cruise missiles.

There was not much in the way of a guidance system, a basic autopilot kept the flying bomb stable, using the rudder to steer rather than the weapon needing to bank. A propeller on the nose counted down to the intended target area, at which point the weapon would be put into a steep dive. This caused the fuel flow to be cut, meaning people on the ground knew that if the overhead V1 suddenly went quiet, it was about to impact. The Luftwaffe got round this flaw and later models went into a powered dive with no warning.

V1s were in use from the summer of 1944. Although the majority were launched from ramps in occupied Europe and aimed at London, over a thousand were air launched from beneath Heinkel bombers over the North Sea.

Below; Cutaway image of a V1 from wikipedia commons 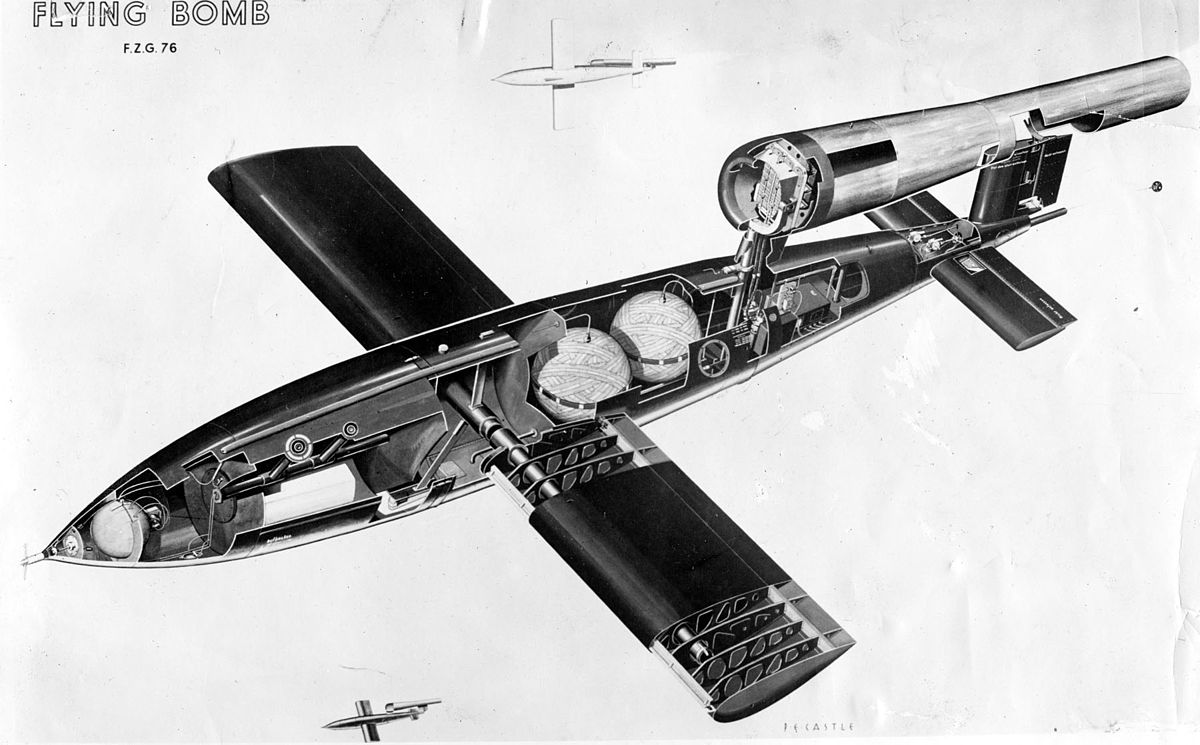 V1s were painted pale blue/grey underneath with olive drab on the upper surfaces. The inside of the metal was painted red.

Sometimes propaganda leaflets, mini copies of Signal magazine and ‘POW letters’ were stashed in canisters in the missile. As the engine cut, the canisters were ejected and, the Germans hoped, the material would be picked up by British civilians. Many did so out of curiosity. This is an example; 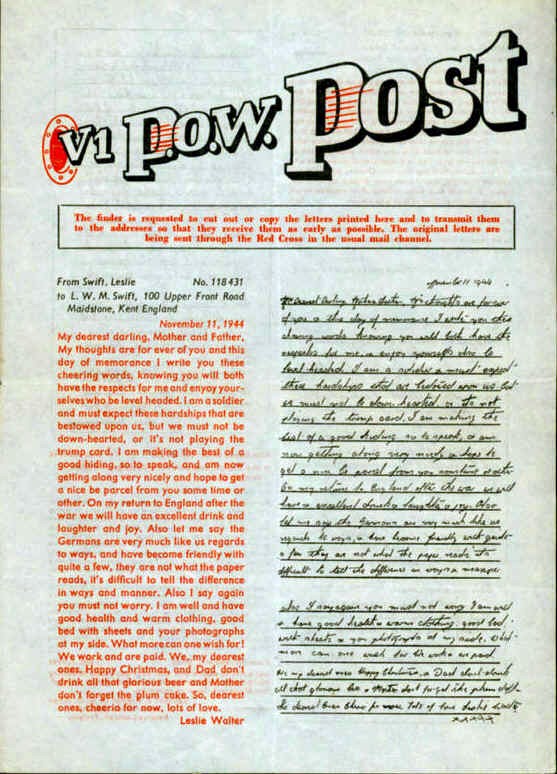 These letters were genuine. The idea of these Prisoner of War letters was that someone would pick them up and one would eventually make its way to the relative, whereupon the person would write to their relative in a POW camp, and the Germans would know then where the letter was found and thus where their missile fell… It was a long shot really, depended on the letter getting to the relative and then the relative obligingly telling the German censor how they came about it!

Pages from Signal magazine Nr 17 which were in the V1s used against Manchester on 24 December 1944 from Gothicstamps.com. 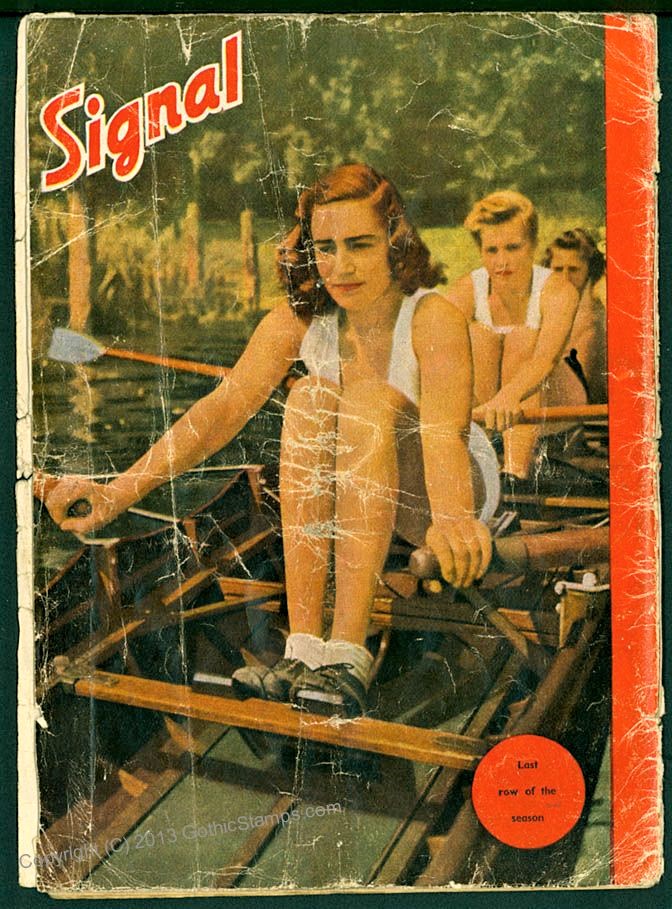 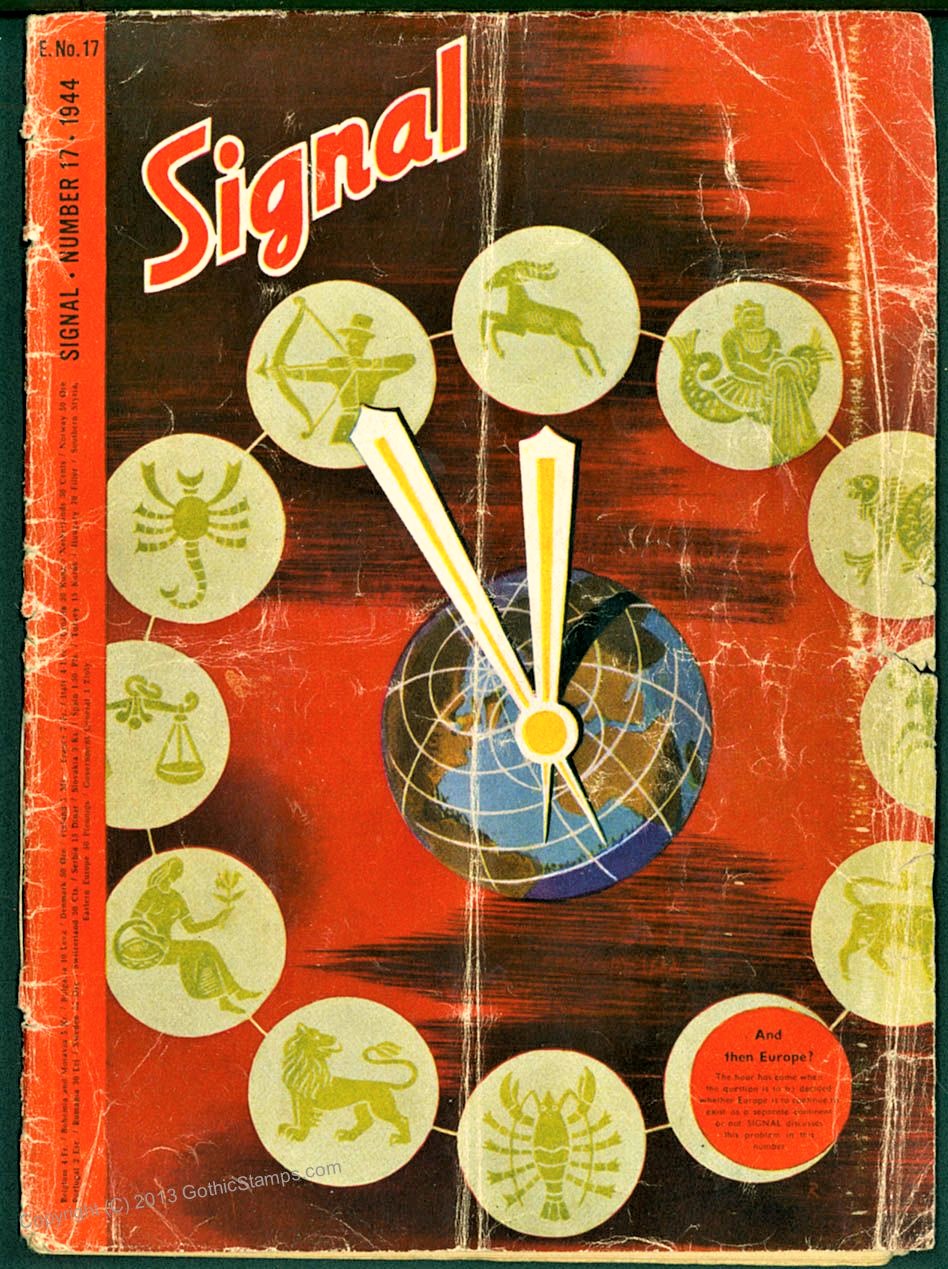 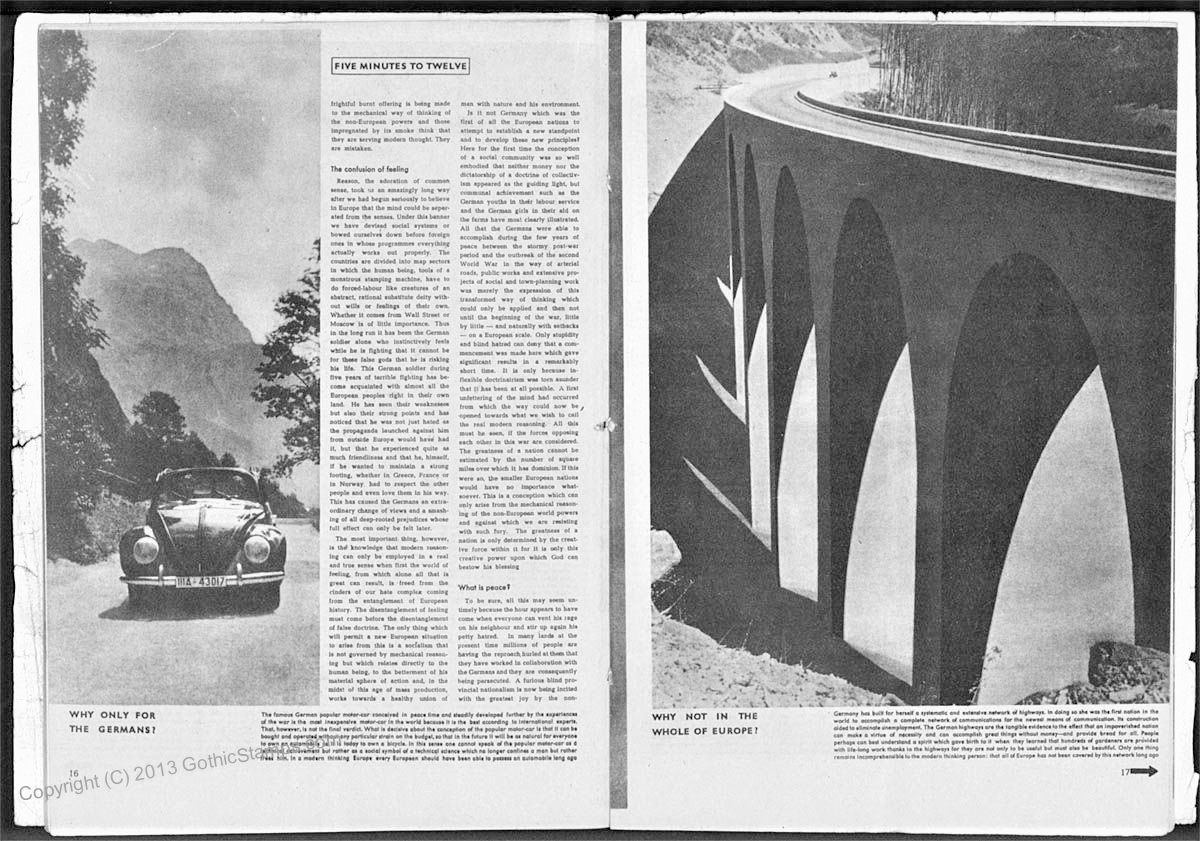 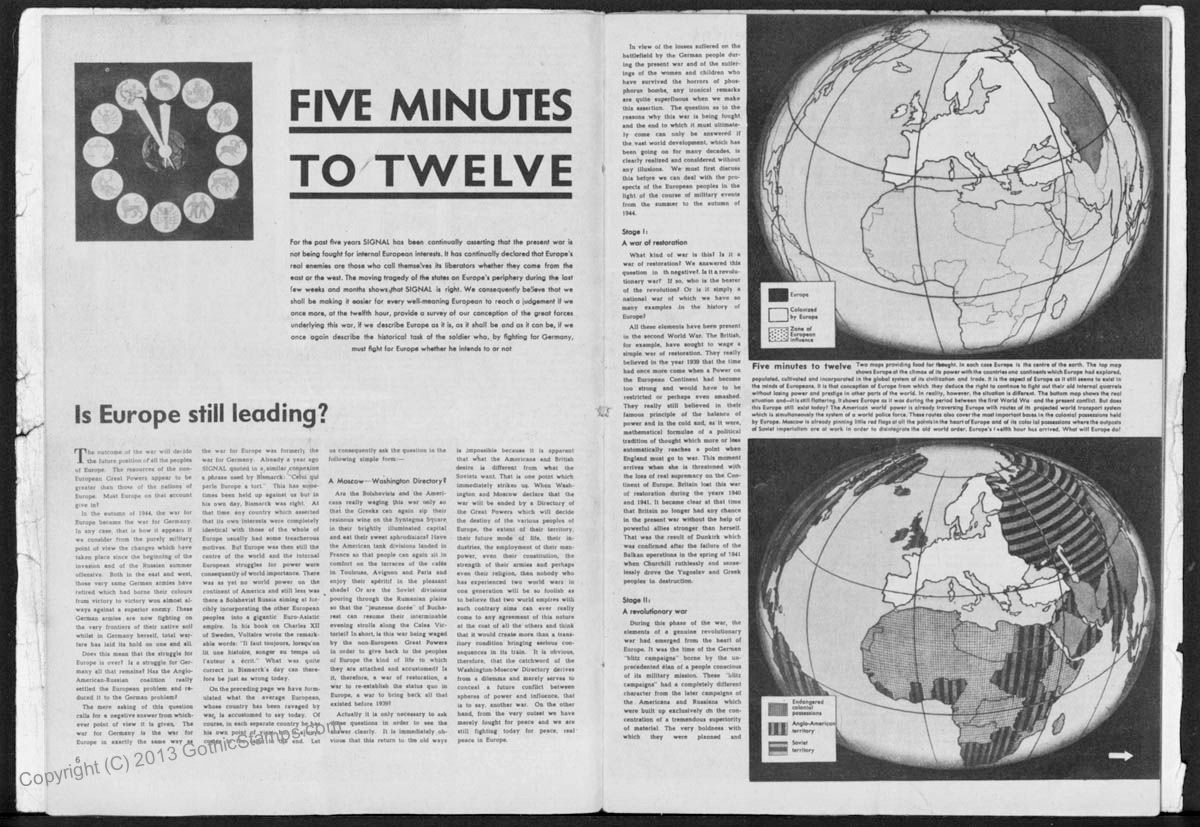 Lead photo; an Airfix model of a V1 suspended from the ceiling and photographed out of focus and layered over a photo of the moon.